I decided to become a member as I'm sure I may have some questions as I go, getting back into this hobby.


A bit of background;
I used to switch between planted fish tanks and breeding Leopard Geckos, it seemed every 6 to 8 years.
I wish I had more pictures of my old set-up's, but a hard drive failure years ago took thousands of my pictures.


It now houses my Haworthia collection. I use 2 Current USA Satellite Freshwater LED Plus Light to grow my plants in this tank. I have several other Current lights on other tanks I grow carnivorous plants in as well.


My second stand I built. This one was taken down several years ago when we moved some furniture around. About 3 years ago I sold it.


So now we are almost to the current day.

The wife and I have a spot we were trying to figure out what to do with. I suggested a tank. She was thinking a storage ottoman. We are great at procrastinating and would look occasionally at ottomans. Over a year later, still no ottoman.

I stopped in at the local pet store over the summer and noticed the Fluval Flex 32. I really liked the shape and design of the tank. Took the wife to see it and she liked it as well. So we ended up leaving with the tank.

I looked at the stand that Fluval made for the tank and was not impressed for the money.
So I decided I was going to build my own.

I'm planning on building a floating shelf above the tank. I have 2 cats and can see them trying to jump on top of the lid of the tank. That is why the first 2 stand builds I made have tops.

I'm starting to think about the tank.

I keep things low tech, but 75% sure I will be getting a second light in the lid. I do not know if 1 light will be enough for plants I remember having good luck with all those years ago. Heck I can only remmber a few plants anymore.


Looking at the pictures on the Fluval box of the filter, I do not like the way the water flows, or lack of flow, through the media is shown. I see this is something others have made mods of. I will need to do more research on what I want to do with this.


I found people having issues with heat. I'll have to see what I can to, since I will have a shelf above the tank that will help hold heat to the tank.


Any good insight to mods, I'm all ears.
E 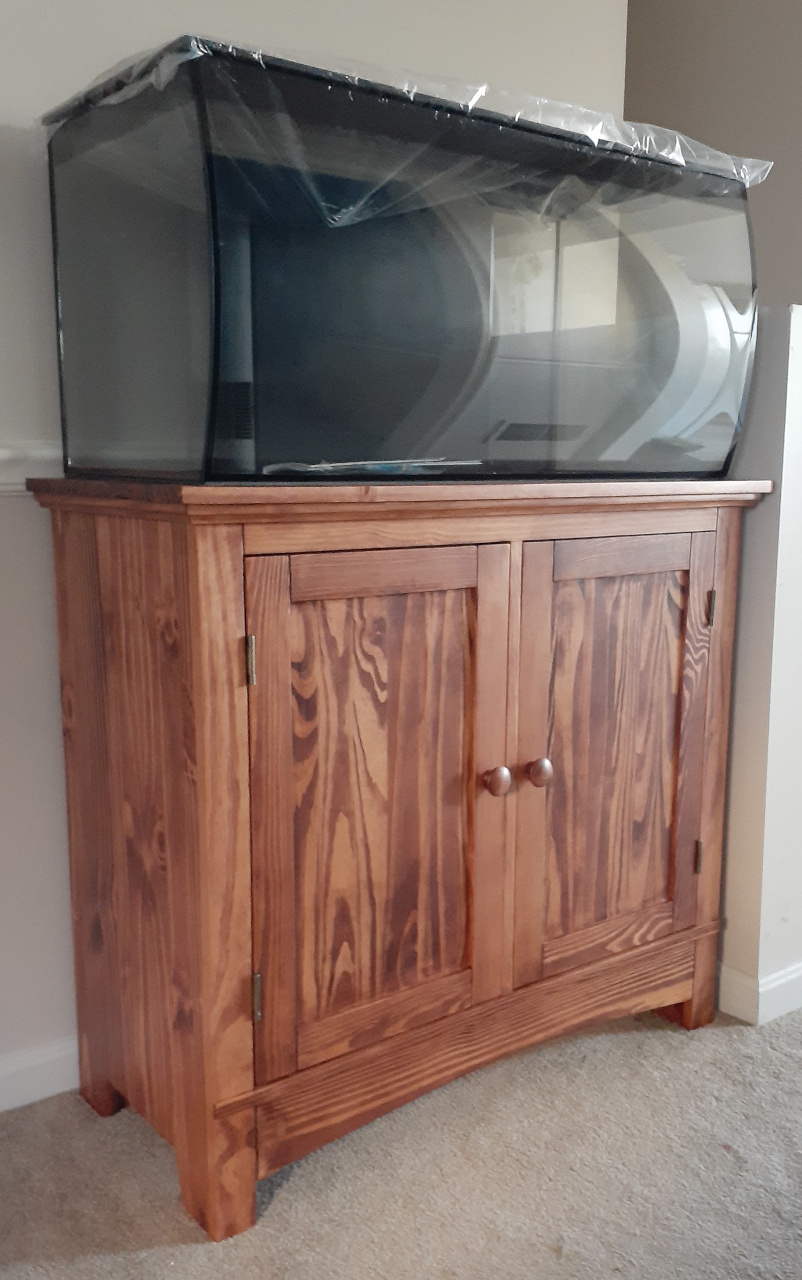 I have everything for the floating canopy complete.
Canopy is upside down in the first 2 pics.

Now for my concern... attaching the floating canopy to the wall. The canopy is 33" long and 16 1/2" deep.
The canopy will be removable to access the fish tank.
I have 2 cats which I'm sure will be jumping onto the canopy... in fact I will be building additional shelves to create a cat highway for them along the ceiling.... eventually.

I will be able to attach the main mounting wood for the shelf to the wall hitting 2 studs. I'm also planning on using 2 butterfly anchors around the black X marks.

My original thought was to have the 2 support arms for the shelf be removable as well with using a 1" dowel. I'm starting to think, of not removing the arms, and glue it all together along with metal L brackets from the main mounting wood to the support arms.
My concern is the weight of the cats jumping to the shelf and it starting to sag.

great looking stand by the way.

Joined Mar 28, 2019
·
3,210 Posts
I'm not sure I understand the dowels. I too would worry about sagging using only wood. Not sure how big your cats are but even a 7 lb cat jumping from height to the far edge of the shelf is a lot of sudden weight.

I'd look into building the arms out of metal if possible.
X

Joined Oct 17, 2007
·
1,565 Posts
Google for “metal floating shelf brackets” or similar.
They’re basically a steel rod welded to a mounting plate. You could drill your wooden arms to accept the rods.
E

Joined Nov 14, 2020
·
14 Posts
Thanks for everyone's suggestions.
I've been doing more research and I believe I will be making a metal bracket to hold the canopy.


xrayguy said:
why does it have to be removable?

great looking stand by the way.
Click to expand...

Thanks.
The canopy will be 2 to 4" above the tank. It needs to be removable to access the tank.


minorhero said:
I'm not sure I understand the dowels. I too would worry about sagging using only wood. Not sure how big your cats are but even a 7 lb cat jumping from height to the far edge of the shelf is a lot of sudden weight.

I'd look into building the arms out of metal if possible.
Click to expand...

The dowel would make a stronger / better connection between the 2 pieces of wood.
My one cat is a big solid cat. Haven't had him to the vet in a while. I'm sure he's over 15 Lbs. My other one is around 8.


I still have to put a few coats of polyurethane on the canopy.


I want to make a cat house beside the tank for the cats to watch the fish and be able to access the floating shelf.
Found a box at work that is extremely close to the size I'm plan on making the cat house.


The start of the framework for the cat house.
T

Joined 11 mo ago
·
6 Posts
Might want to check into this for improved filter flow. inTank Media Basket for Fluval Flex 32.5 | Fluval Flex 123L

I purchased one for my Fluval Flex 15 and really like it.

Joined Mar 28, 2019
·
3,210 Posts
Nice catproof canopy! I've been meaning to make some cat furniture, but I keep putting it off. Looking forward to seeing the complete effect here.


Thanks. Good to know. I ran across that a few months ago. Already planning to build it. Cardboard test build.

I have a big idea for a large scale catification involving the floating canopy...
E

Joined Nov 14, 2020
·
14 Posts
I was trying to think of how to attach the canopy to the bracket so it would not shift when the cats would jump up on it.
Came up with this idea. Just tapped the metal bracket. Make finger tight, canopy isn't going anywhere.

Added the second LED fixture to the hood.

Swapped out the outlet for a GFI outlet.

Have the filter mod done. Have to wait a few days for the silicone to fully cure and I'll finally be able to get water in the tank.

The next hard part is trying to figure out how to decorate the tank.
I've been looking at stones and driftwood for some time.
Haven't seen any driftwood I like in the store. I thought about looking for some when kayaking, but just not sure what I'd end up with.
I may add some wood if I find some thing I like.

I was looking at dragon stone but afraid it was going to blend in too much with the gravel.

Unfortunately That Fish Place does not allow you to return unwanted / used stones. I did not fell like spending another $25.00 on stone I would not use, so I went with the grey stone for more "pop".

Now I have to find the plants I'm looking for.
E


The plants I started with:


Ceratophyllum demersum (Hornwort) - Going nuts. Cutting around 3" to 4" off the plant every week and thinning out bunches of it.
Vallisneria asiatica (Corkscrew Val) - Doing great. Spreading quickly.
All the Cryptocoryne wendtii starting to settle in. If I recall it did take these plants a long time to get going before.
Aponogeton ulvaceus - Growing great.
Hydrocotyle tripartita - First time trying this plant. Not fading, but not seeming to grow either. Not sure the issue. I might not have enough light for this plant. Might like a different substrate. May want CO2.
Rotala indica - Just added this at the end of last month. Looks like it is settling in and starting to grow. Should have no problem. My old tank, that I posted a pic of in the opening post, 2nd picture, the right hand side was all this plant. Grew it great before, hoping to have the same results.

Dropped a few fish in.
Cats seem to like it.

Think I may have everything stabilized now. Was playing with the lighting, and ferts for some time which some plants did not like.
Think I have it dialed in now. Plants are growing and very little algae. The Rotala rotundifolia after 3 months is starting to grow. (Back right hand corner)
There is so much adjusting that can be done on these LED lights that I never messed with before. The last tank I had, I was using different T8 bulbs to get the proper balance of light needed. There wasn't adjustment of intensity and light color that there is available now.
My front and rear light have slightly different settings.
With the adjustments that can be made, in the morning when they brighten and evening as they dim, they get a nice reddish color just like a sunrise and sunset.


I've got a question about this Echinodorus Parviflorus I purchased a few days ago. It appears to be 2 smaller plants wrapped together with thread. Would you separate the 2 plants?
This is what I'm thinking because with both plants growing together, the rosette growth pattern would be deformed where the plants are next to one another.
Just wondering if anyone had any experience with such a situation. If you kept the plants together did they form a nice rosette?