Joined Jan 16, 2010
·
1,296 Posts
I wanted to move on to a bigger tank from my Mini-M and decided on a 60P. This will be an iwagumi style nature aquarium. The HC and DHG carpet will be grown emersed.


Some of the equipment

Thanks for reading. Questions or comments are welcomed.
3

Joined Aug 17, 2014
·
466 Posts
Nice set up,I think you need to go a little bit higher with the slope in the back,and less in the front with the substrate,play around with the stones and spread them more out,cheers...

3rdworldmon said:
Good Luck mate. Looking forward to follow up pics. Are you using just the ADA soil btw? No additives or powersand?
Click to expand...

I'm only using Aquasoil as I'm a huge fan of the product. The rest of the lineup are just snake oil IMO.

Dantrasy said:
Great setup, although I think you're focal point rock needs to be bigger.
Click to expand...

I did play around with larger stones but liked this scape the best. Large stones made the scale of the tank smaller. I wanted the scape to look like it's in a deceptively larger tank.

Powerclown said:
Nice set up,I think you need to go a little bit higher with the slope in the back,and less in the front with the substrate,play around with the stones and spread them more out,cheers...
Click to expand...

The substrate is already 2.5 to 3" deeper at the back.

Thanks for reading, everyone.

This was one of my challenge to get that scape into a 60pq
Click to expand...

Great tank. I like the scattering of tiny stones throughout. Gives it a very natural look. I might do the same and see how it looks.

Joined Jan 16, 2010
·
1,296 Posts
This is my 5th dry start so far over the years. I took all the HC I previously had growing in my Mini-M and planted it in this tank. It turns out I had a lot of it, so I placed the HC as close together as I could to speed up the growing time.

I also planted mini dwarf hairgrass from a pack of Tropica 1-2-Grow. I'm a huge fan of these because they pack a ton of plants into each pack. It's also grown emersed so there's no die-off from the transition to emersed growth during the dry start. Because DHG will easily overtake HC if planted together, I put a plastic divider to separate the two plants.

The leaves on the HC has started to yellow as expected. They'll all eventually be replaced by new, healthy green growth. The entire dry start should be finished in 4-5 weeks.

The dry start has been slow this time around. Usually, I'd place the tank on the floor and have it tilted so that water level is even for the entire substrate. Unfortunately due to the size of this tank and the fact that it was sitting on a stand, I wasn't able to do this. As a result the shallow substrate at the front had a lot of water whereas the deeper substrate at the back was almost dry. Despite me misting the tank 3-4x a day, most of the HC and DHG in the back died off. After waiting 3 months for it to fill in, I flooded the tank two weeks ago. The HC has filled in about 90% and looks great. The DHG has a bit of thread algae, but otherwise doing well also. The Aquasky light is actually stronger than I though, so I had to reduce the light period to 8 hours to curtail the algae growth.

Here's what it looks now: 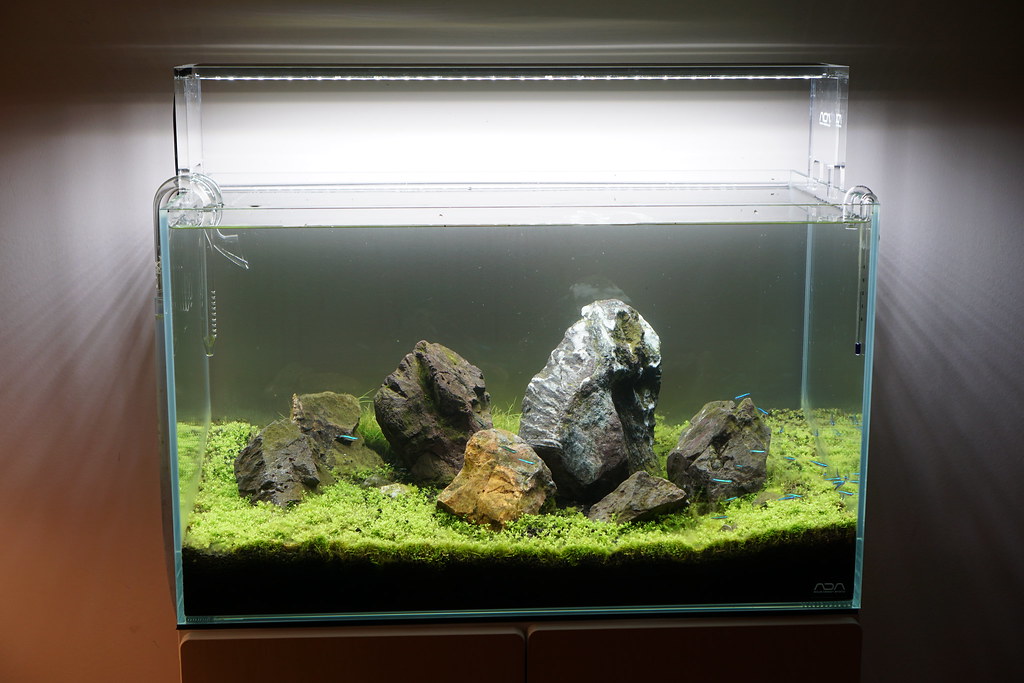 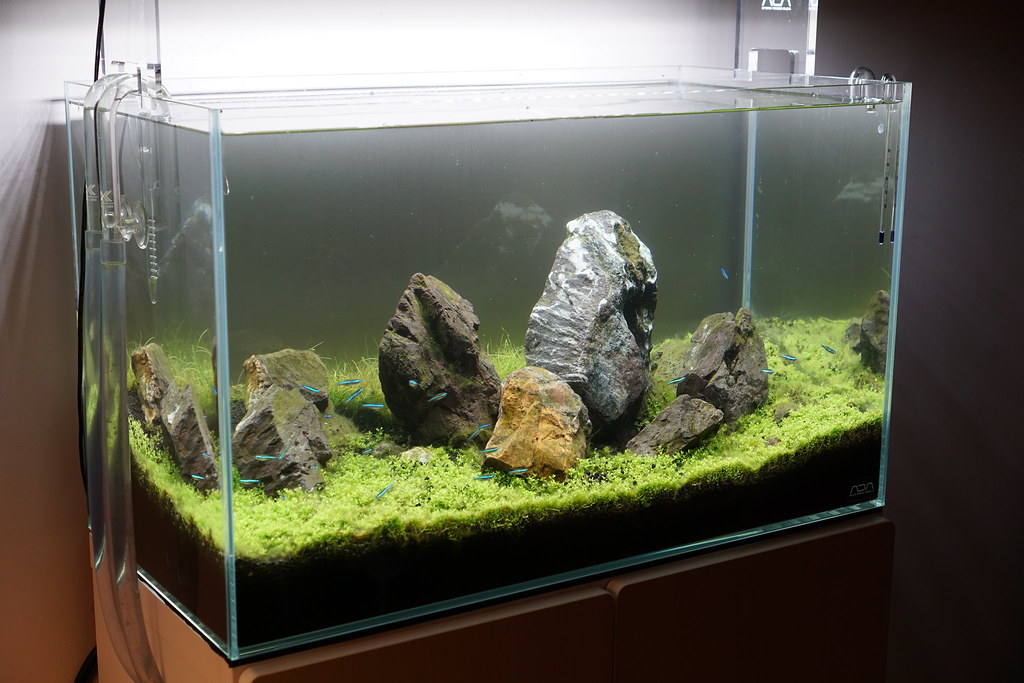 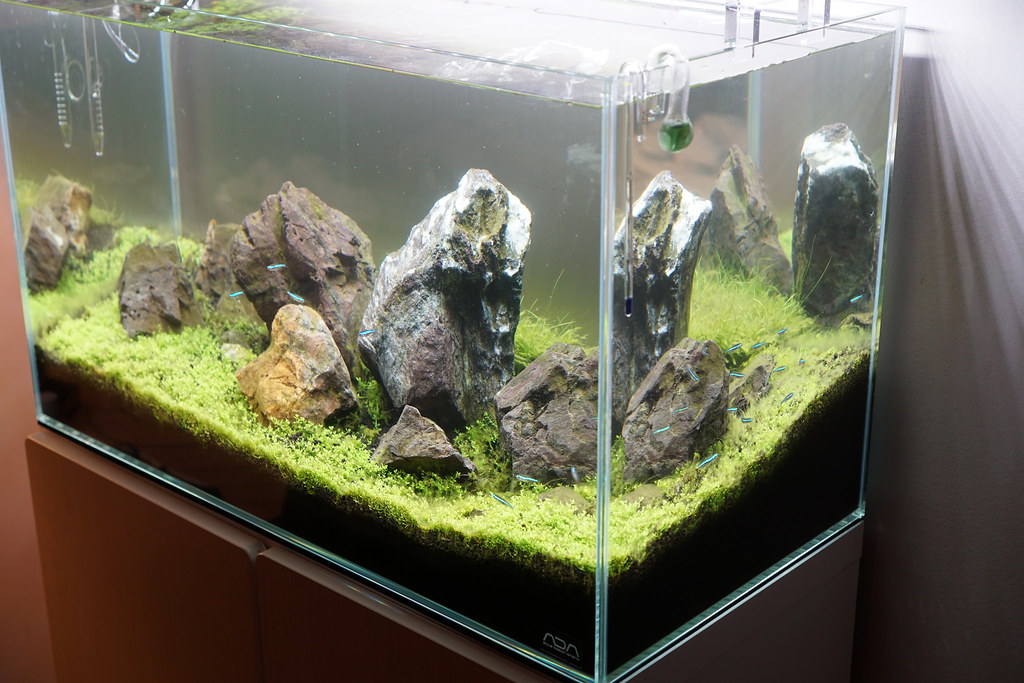 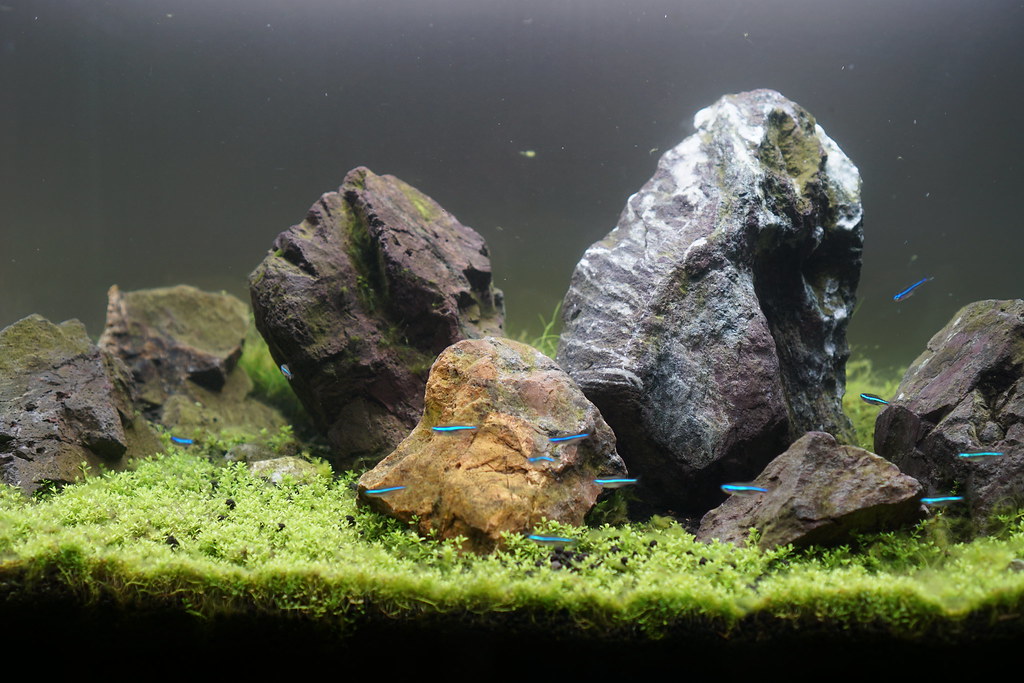 I've placed the lily pipes into the openings under the light 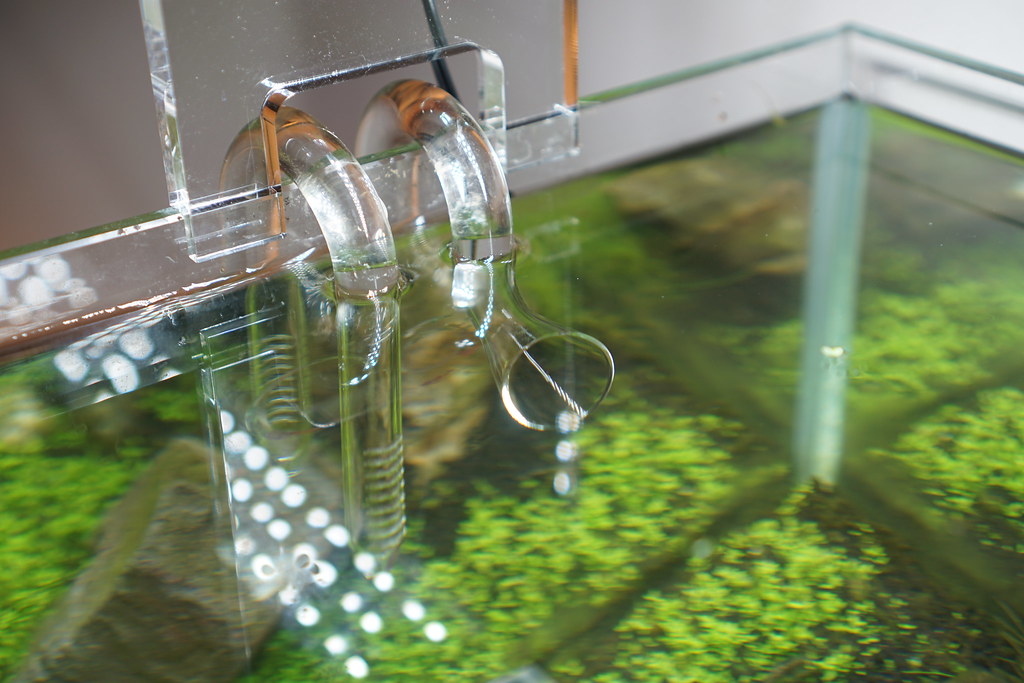 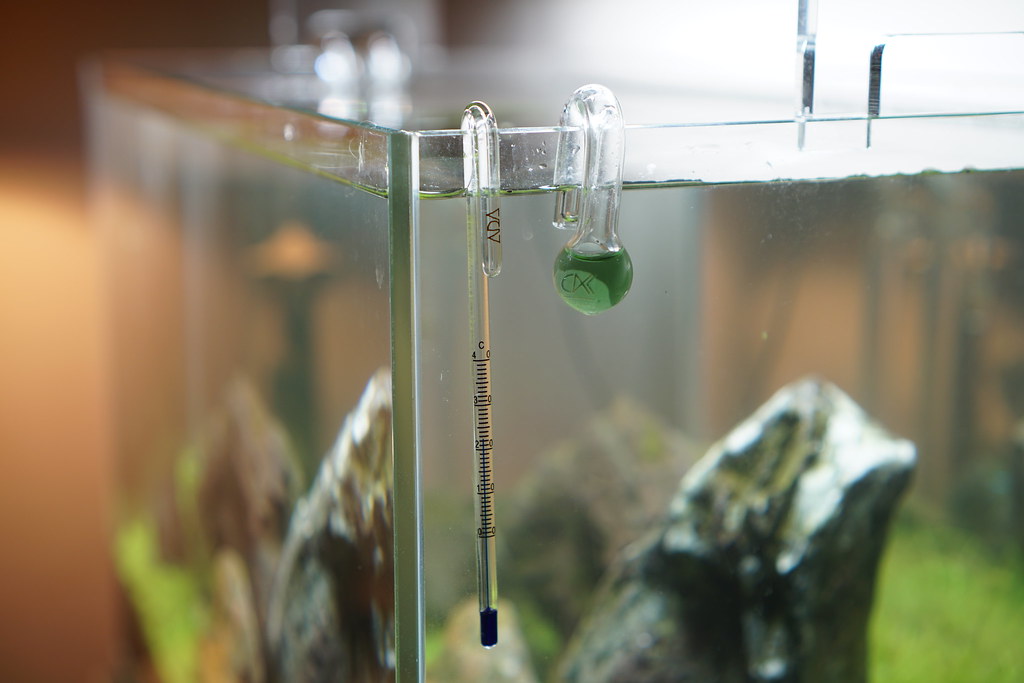 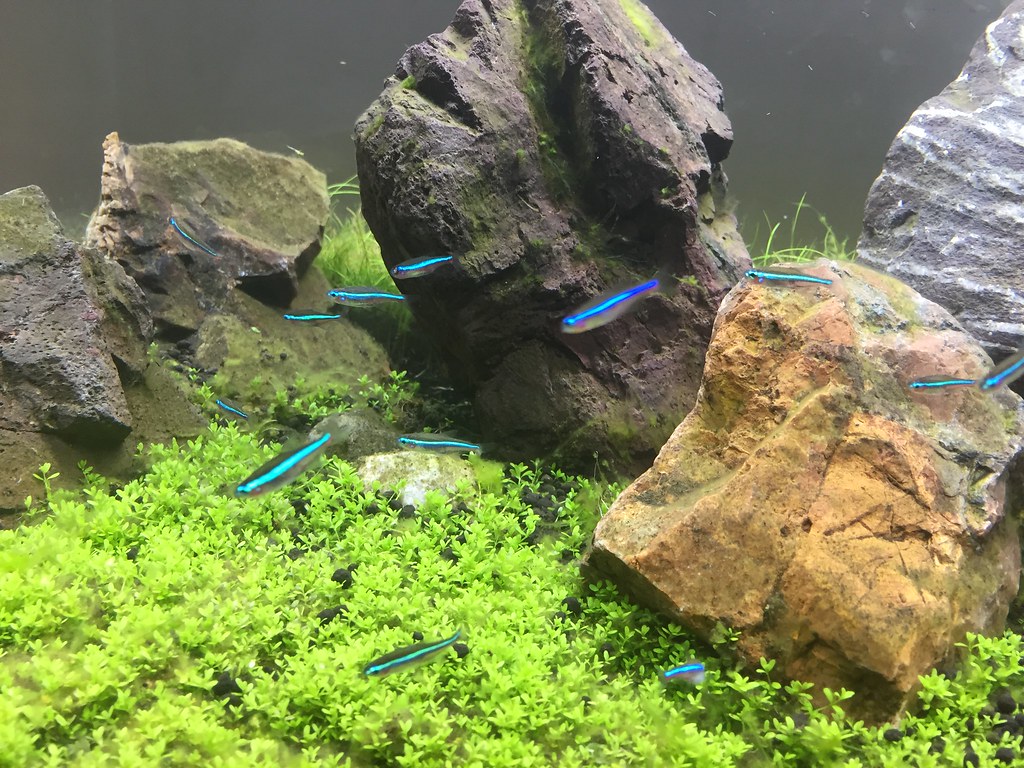 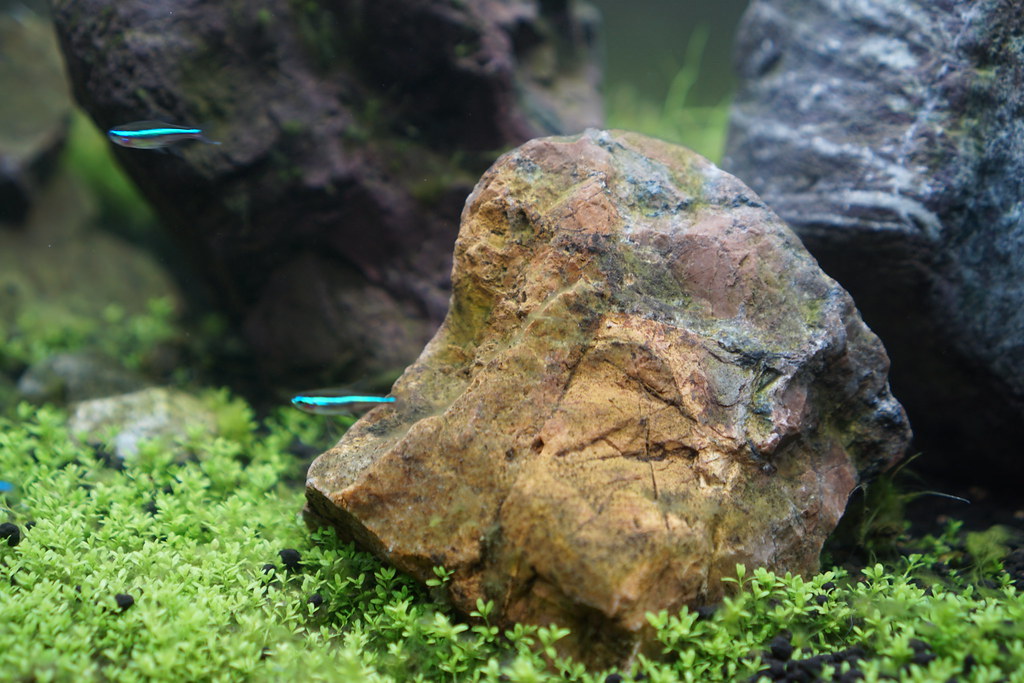 The tetras are doing great and have all survived so far. They're forming tight schools and swim all over the tank between the rockwork. Next week I'll add a school of C. habrosus dwarf cories to complete the livestock.

Are you thinking of adding some amano shrimp or atos?
T

Joined Jul 1, 2015
·
131 Posts
Man wish I had thought to check children's storage at IKEA!! I just set up my modified and reinforced Besta cabinet for my new 60P, but hate the extra lip behind and in front. This fits PERFECT. Ugh...now I'm seriously considering going to IKEA this weekend to get this stand and redo it all again haha.