I've decided I would journal my experience with this tank. This is my first real planted tank. I’ve used live plants in my previous tanks - single plants and swords in Betta bowls, etc. - but now I want to give it a serious try.

I have a few photos of setting up the tank and the finished setup. I got a lot of inspiration after lurking around on Tropica's site - mostly for plant care and how to prep plants for... well, planting. It’s actually been rearranged since these photos and the driftwood hardscape was switched with a different one. I also realized that I needed more substrate, so that is going to be added in at a later date.

I’m just going to blow the dust off this thread, if that’s all right.

I moved into a new apartment last June, and never really restarted my tank(s). However, within the past couple months and changes in my life, I restarted the 10 gallon that has been sadly empty. I set it up some time ago, and it’s had a chance to cycle. However, I am not happy with its current look and I’ve sort of done a poor job of managing it. So this journal will follow the clean up and utter re-scaping of my 10-gallon low-tech low-medium light tank.

The specs stayed about the same. However, the plants are different!

Aside from the fact that this entire tank has gone completely feral — the plants are out of control, major upkeep needs to be done, and it’s over-stocked — there are a few steps that need to be taken.

Game Plan!
1) I want to completely remove the Cabomba, Val. Gigantea, and the Riccia.

2) Update the hardscape. I have much better looking spider wood now that will hold the Java fern and multiple Anubias that have come under my care (thank you, JJ09!)

3) Get that Monte Carlo to carpet!

5) Relocate fish/critters into different tanks. I sort of overstocked this tank, and that’s probably the root of some of the issues.

Now for a clean slate. I’ve actually had this tank up and running for about… 3 weeks now. I used a filter for the previous 10g setup to get the cycle going. The plan was to turn this 10g into my new Shrimp-only tank. I had several RCS in a 5g, but I feel that, given time, they will eventually outgrow it. Plus, it was easy for the parameters to fluctuate in the 5g, so I knew I would need more room for stability.

I ordered two pots of Monte Carlo, and got to planting! A lot of it melted, which was expected, but I'm starting to see a lot of new, small-leaflets sprouting. Super excited! I have several anubias - some given to me by @JJ09 - so I attached them to openings in the driftwood. It's been awhile since they were attached and I can see fresh, white roots beginning to grow into the hardscape. I moved the Lobelia from the 20g to this tank, since the algae was getting to it. It's looking much better now. Picked up some Spike moss at an LFS in Maryland, and attached that to the open pockets on the driftwood. So the plants are doing well.

For awhile, after moving the shrimp in, they were very inactive. I was worried because one of my females was recently berried. I think it was because there was an oxygen deficiency and I was dosing CO2 prior to moving the shrimp into the tank. However, @stormx22 was kind enough to give me her old air pump, and since installing it, I've seen a dramatic difference in the shrimps' behavior. They look a lot more active, they're eating more, and I have two - that's right, 2! - berried females!

Eventually, I would also like to get Tangerine Tigers... 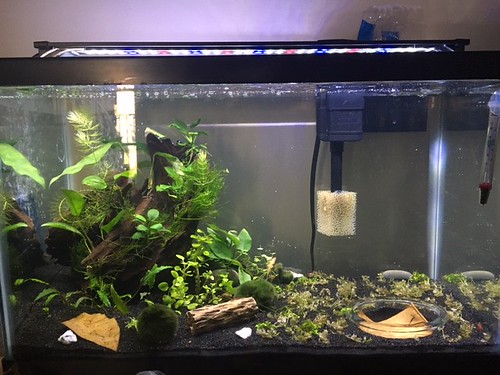 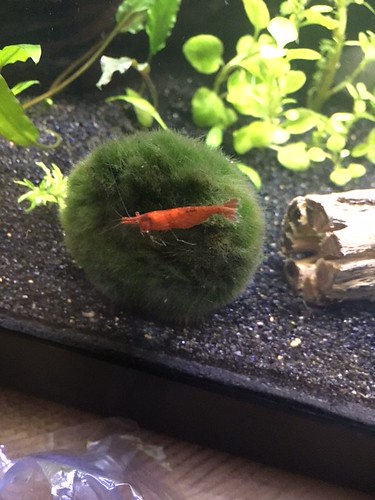 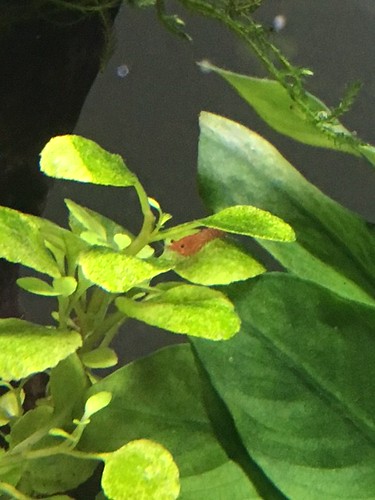