Joined May 1, 2015
·
103 Posts
I just purchased 8 boesemani rainbowfish from ebay, and they looked the worse for wear when they arrived. Here are some pictures from right after I put them in my tank (probably should have quarantined them): 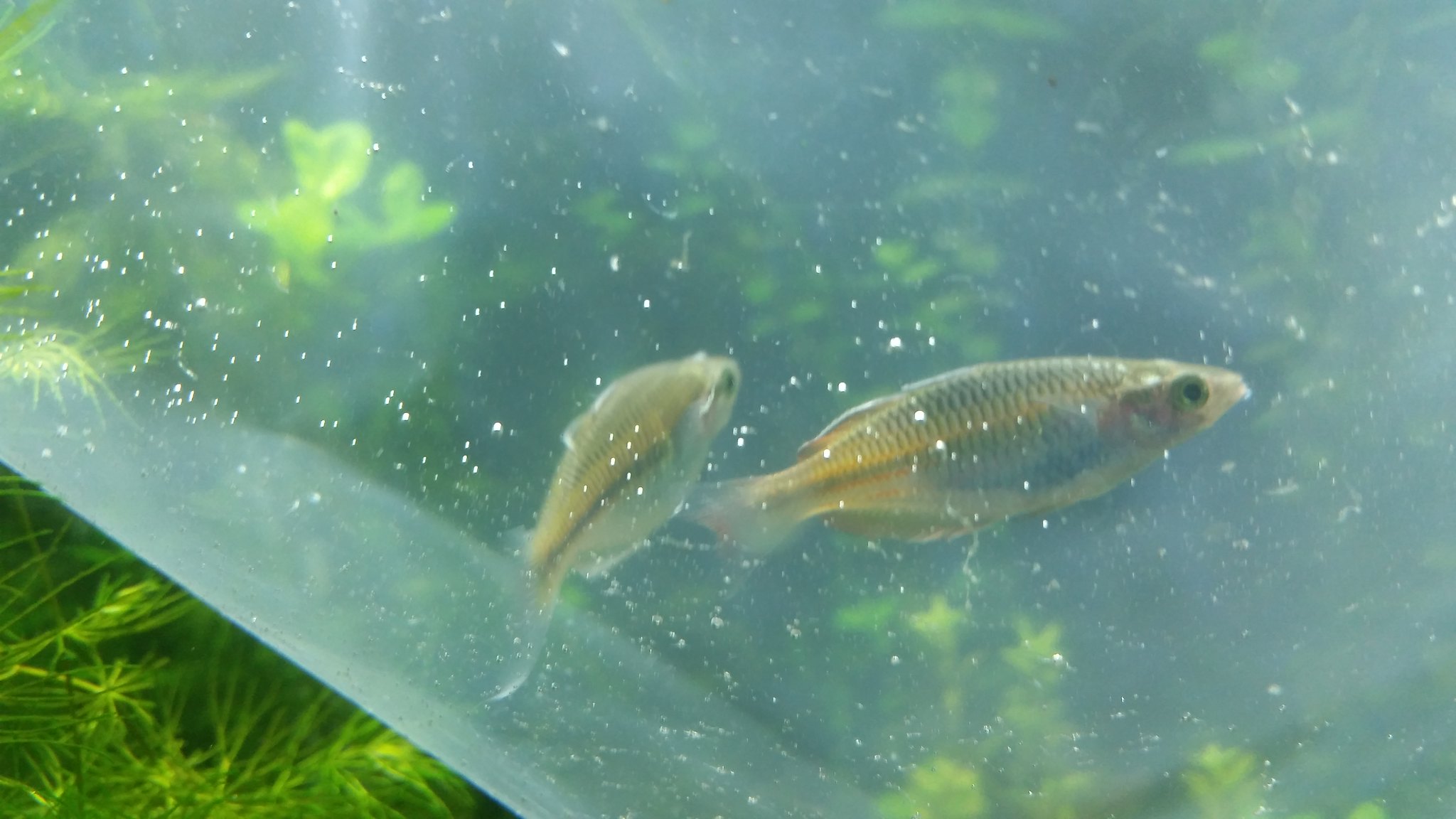 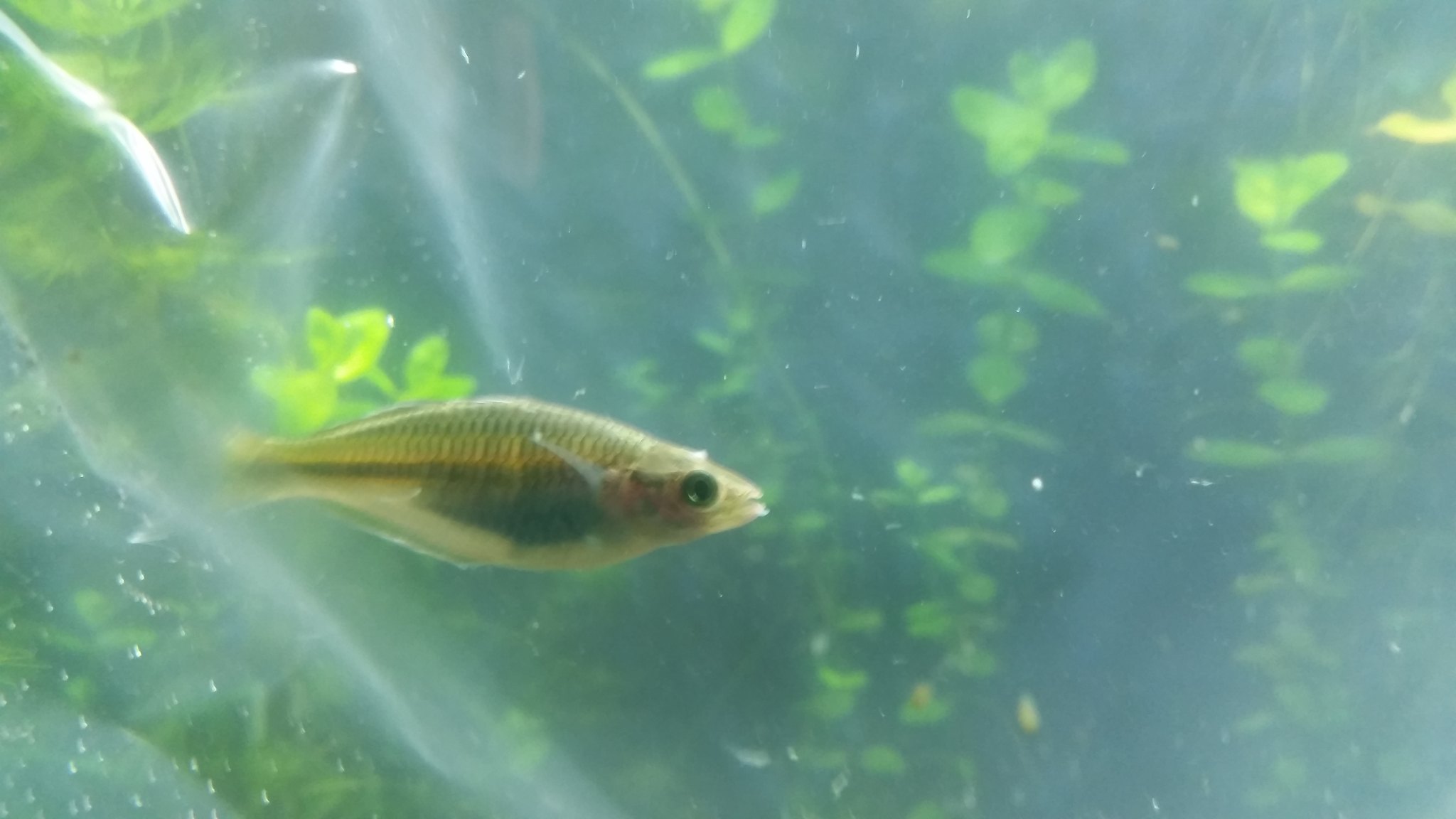 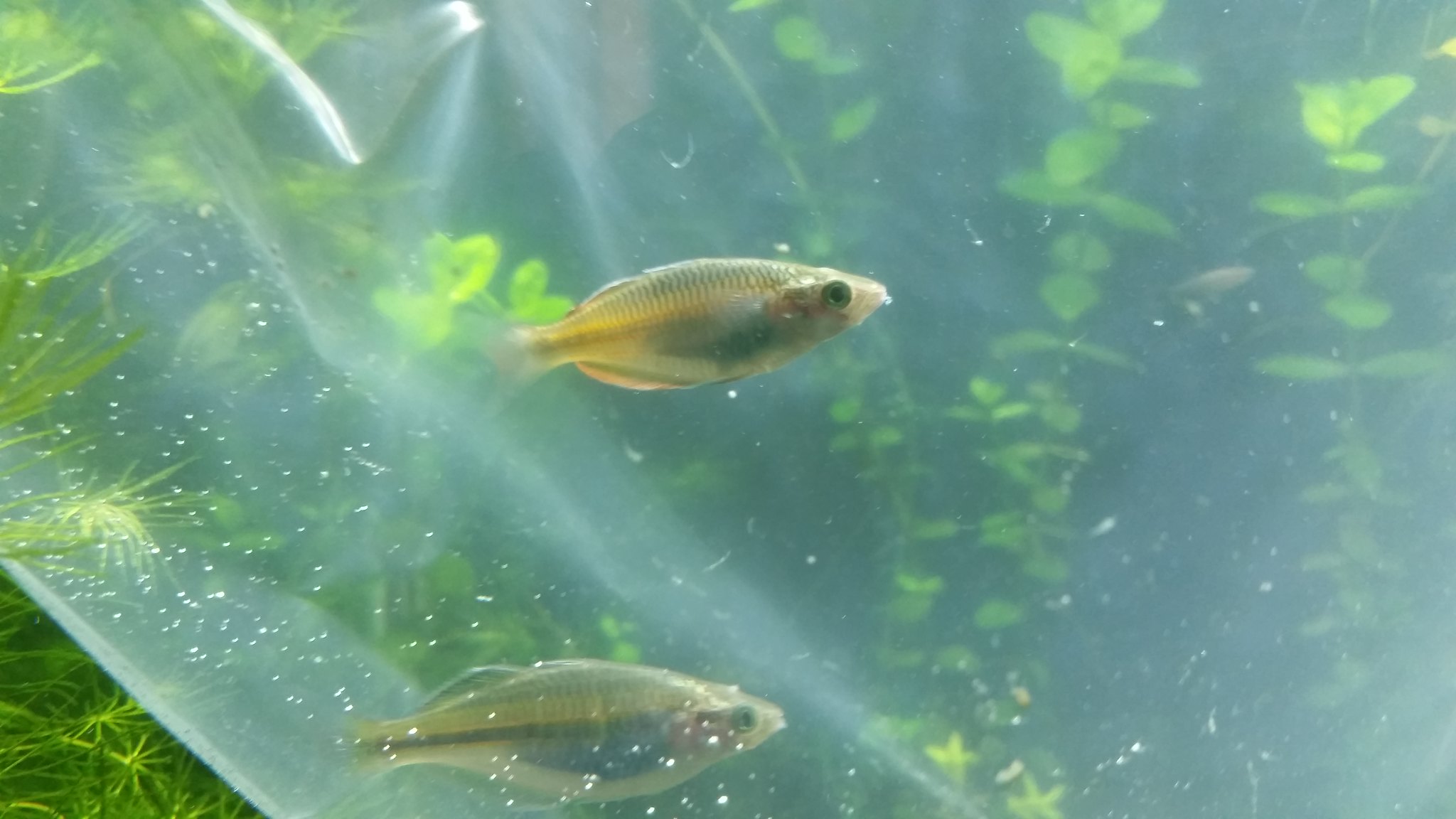 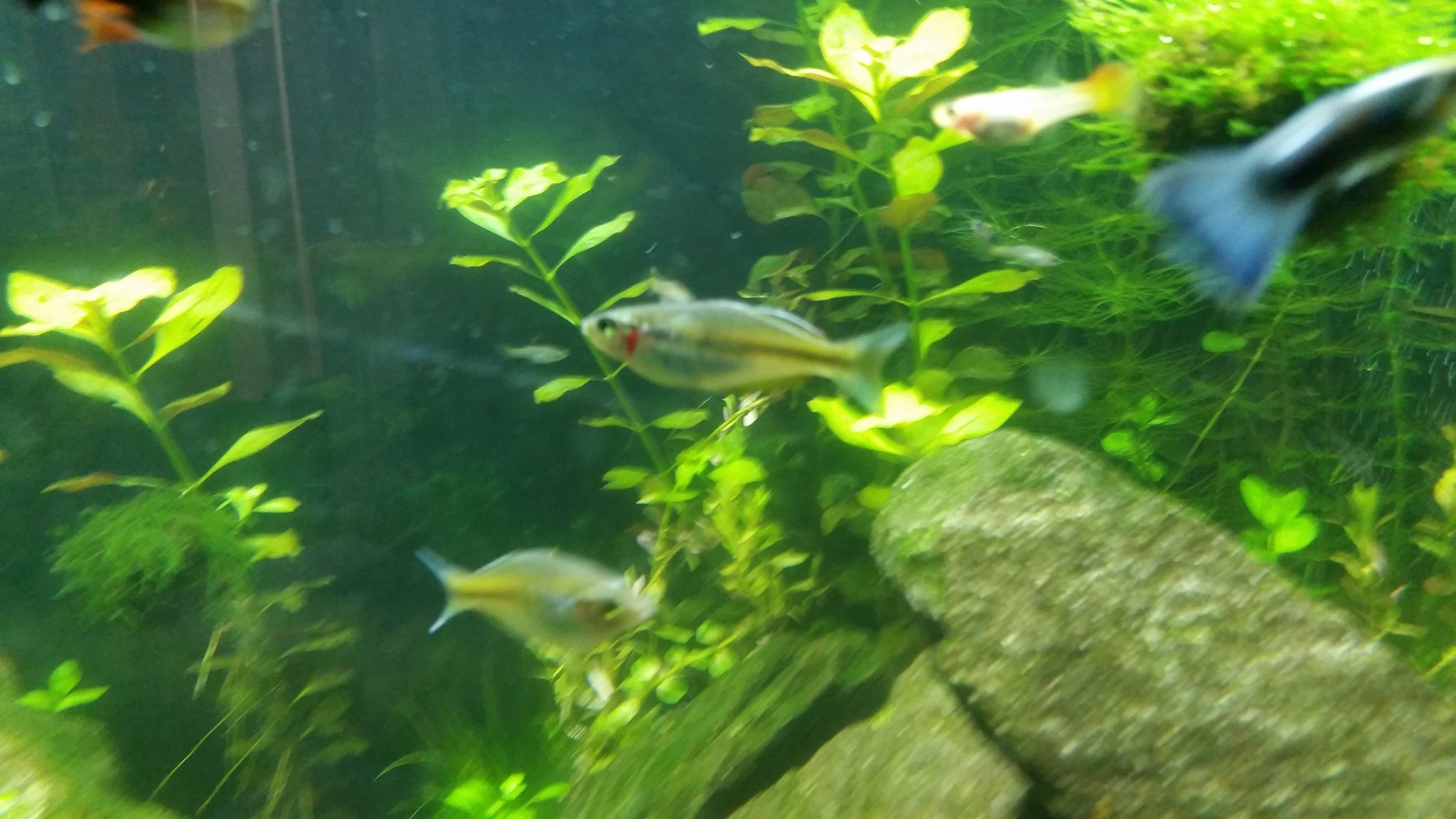 Sorry for the bad photos, but as you can hopefully see one of the fish arrived with a missing gill and two of them had small infections of some sort (top of head and lip).

After about a week those two fish seemed to get better, but one of the other rainbows is now looking a lot worse, see pictures below: 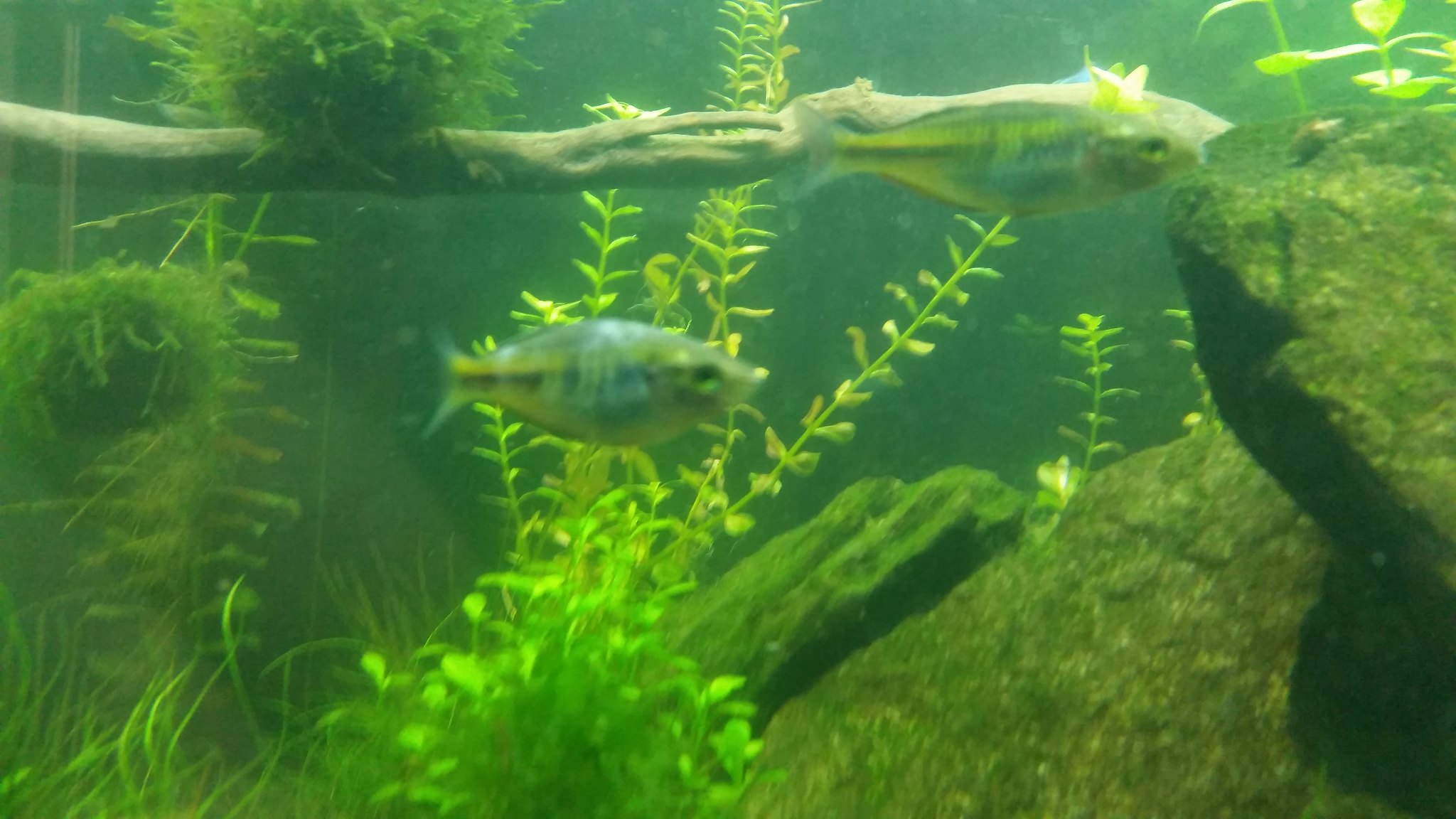 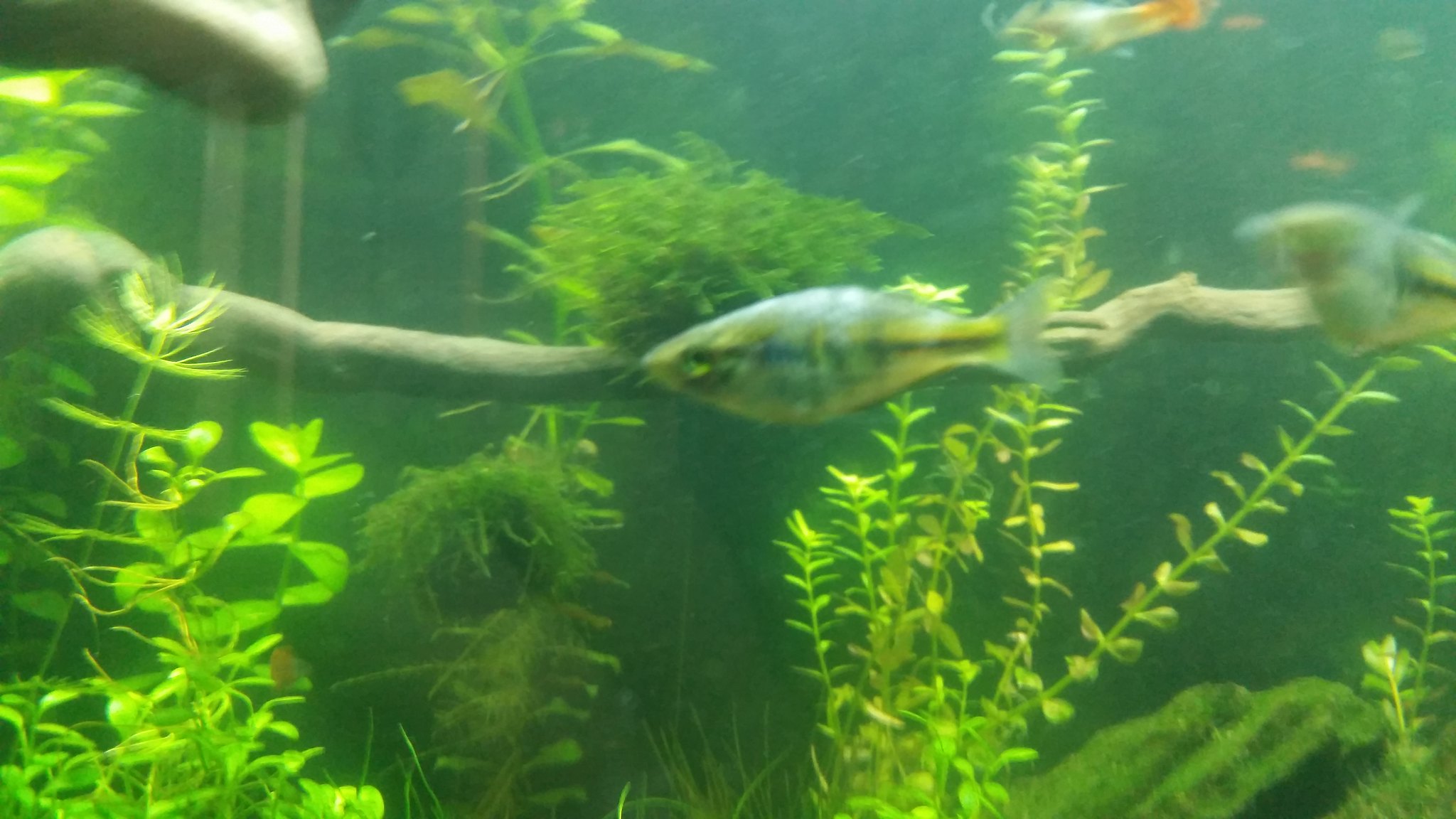 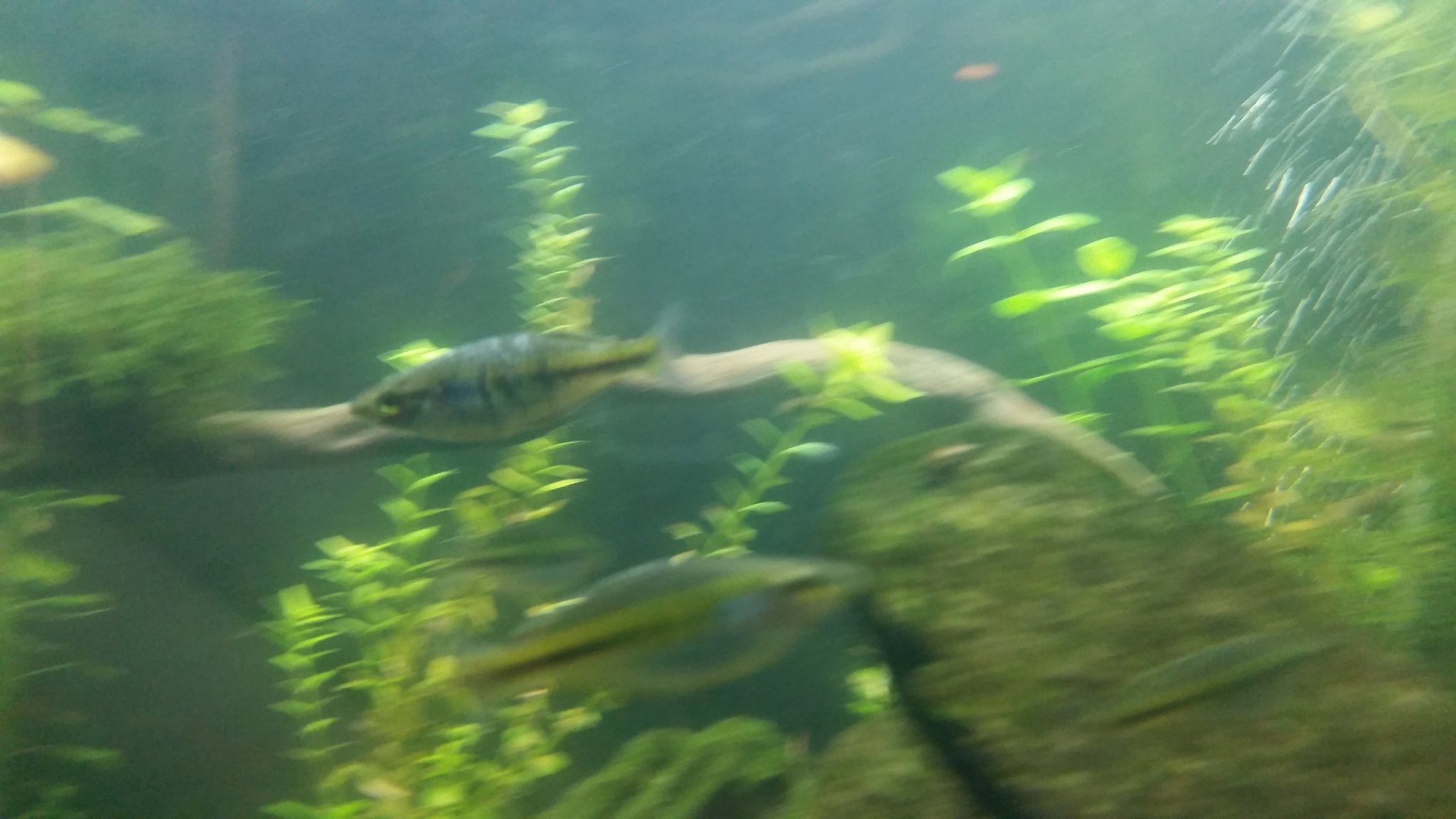 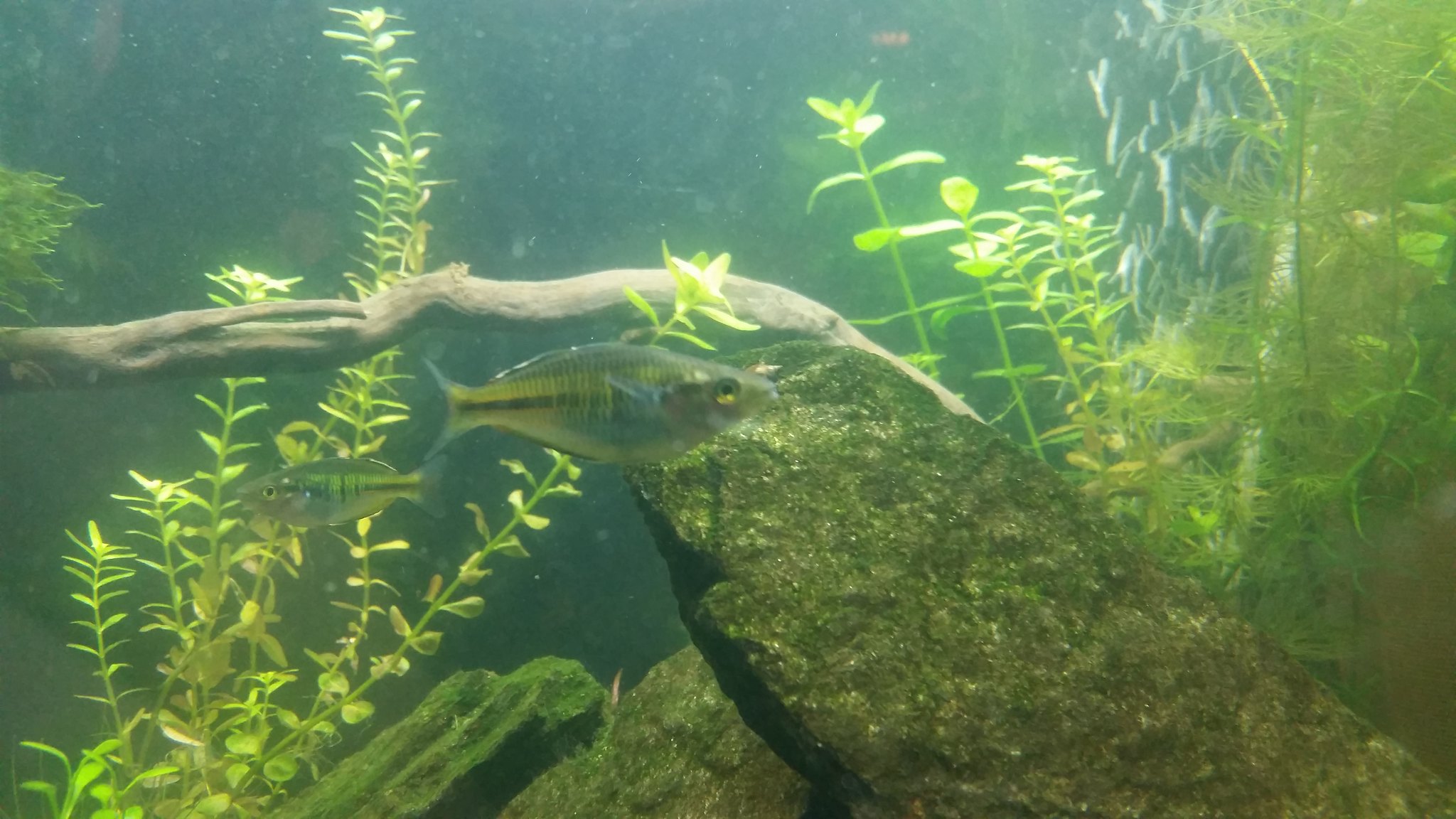 As you can see one of the fish is almost entirely covered in a milky film. The last picture shows some of the other rainbows. There fins are retracted and the tops are white. Is this normal?

Can anyone diagnose what is wrong with my fish? How can I treat it without hurting fish, plants, RCS, or snails?

Should I request a refund from the ebay seller?
J

I think I'm going to do a couple of 20% water changes this week and see if that helps. The tank was looking a little worse for wear and it was pretty polluted at one point (too much food from autofeeders), but it is looking a lot cleaner now.

I think I have also learned my lesson about quarantining new fish.
J

I plan on adding 1tsp of aquarium salt per 20 gallons. Is this a good amount to safely treat a planted tank?

I'm going to do 20% water changes every other day.

I'm going to put all 8 rainbows in a methylene blue bath if I can find the stuff. Any hints on where to look for it? It looks like Petco doesn't carry it, and shopping online is going to take a couple of days to ship.
J

Joined May 1, 2015
·
103 Posts
On second thought, I think I am going to skip adding salt to my tank, but I will add it to the Methylene Blue bath instead. I am going to follow the guidance provided in this article http://www.aquarium-pond-answers.com/2009/07/fish-baths.html
J

Joined May 1, 2015
·
103 Posts
I couldn't find methylene blue anywhere locally, so I ordered some from Amazon. In the meantime I did a 30 gallon water change yesterday and I put the rainbows in a pimafix, melafix and salt bath.

When making the bath I added 8L of tank water, 85g of aquarium salt (about 1%), but I wasn't really sure how much Pimafix and Melafix to add so I attempted to dose the entire 7 days at once, but I think I waaay overdid it (I dosed for 8gallons vice 8L with one of the solutions by accident). Within minutes some of the rainbows were doing somersaults and swimming upside down, so instead of leaving them in the bath for 30 minutes, like I planned, I took them out after 5 minutes, rinsed them, and put them back in the tank.

They appeared to be doing fine this morning, so I'm glad I didn't do any permanent harm, but I'm going to be much more careful about mixing my salt and methylene blue bath tonight.

On another note, about 6 of my guppies have died since putting the rainbows in the tank. I am guessing that whatever they had is spreading to the guppies and killing them quickly, but I'm not sure. Some of the dead guppies I have found immediately and I can't spot any visible signs of infection, but others have obviously been dead for some time and are completely covered with long white fuzz (saprolegnia?).
J

Joined May 1, 2015
·
103 Posts
I managed to kill all 8 of my rainbows in one swift stroke I should have just left them alone to fend off whatever they had by themselves. I have no idea how I managed to kill them.

I put all 8 rainbows, as well as 5 of the worst looking guppies, in a 1 gallon aquarium that I drilled holes in and left it floating in the main tank so that I wouldn't have to keep catching them.

Day 1: Dunked for 5 minutes in 8L of tank water with 1% salt and way to much pimafix and melafix. Rinsed them in tank water, then transferred back to the tank.

Day 2: Dunked them for 30 minutes in 8L of tank water with 1% salt and double the normal dosage of Methylene Blue (40 drops). Rinsed them, put them back. Everyone seemed like they were doing fine.

Day 3: Dunked them for 30 minutes in the same 8L MB solution. They survived, but I transferred them to the rinse bucket and left them unattended for 10-20 minutes. When I came back all 8 rainbows were dead, but the 5 guppies seemed fine.

I have no idea what killed the rainbows. I used the same MB solution for days 2 and 3, and I used the same rinse water for all 3 days. Maybe something built up in the 5 gallon rinse bucket that poisoned them, or they were just too weak to handle the transfer between the high salt concentration solution and the no salt concentration rinse bucket. Either way, it is pretty disheartening.
J

anewbeus said:
I think it was likely the salt. Salt should be approached with caution, and personally I don't like using salt on any freshwater fish. Some folks swear by it in all their tanks, but it mostly is a wive's tale as it only helps in dirty tanks to detox nitrite...you get enough of that from fish food.

Salt mostly will affect GH in the tank and switching fish back and forth will put them through stress from a changing of regulating fluid as it passes through the fish "skin". Think of when you drip acclimate your fish to new water...most folks believe it is pH shock, when in reality it is more a TDS shock which includes GH and KH.

A QT is always a good idea, but if you don't have one or for some reason don't wish to use on...something I have done in the past is use a Paraguard bath, move the new guys in and continue dosing the tank with Paraguard per normal directions for two weeks with daily 25% water changes just prior to dosing.
Click to expand...

The salt was my guess as well.

I am going to replace the 8 boesemani rainbows, but I'm going to wait until the guppies stop dying and the tank is healthy again. I'm also going to need to figure out how to quarantine them properly before introducing them into my tank this time.
J

shloken38 said:
Sorry to hear that you lost these guys. A simple, cheaper solution to a QT tank would be a 10g rubbermaid tub, a sponge filter and a heater. You can always have a sponge filter running in your main tank, in the background. Just a thought.

And definitely get that tank healthy before getting anything else.
Click to expand...

Would you recommend treating the QT with anything? ParaGuard sounds like a good option, but I also already have Pimafix, Melafix, and Methylene Blue.

Is it always good practice to treat the QT, or should it only be done if you see signs of an infection/disease?
J

anewbeus said:
My personal opinion is only if signs appear. I am not a fan of adding things to a tank that are not necessary. Paraguard was a suggestion if a QT is out of the question.

If I can expand on my earlier comment about the salt...

I don't think the salt directly did them in, but it was the apparent sickness then combined with the salt/MB dips then back to non-salted water that probably put them over the edge.
Click to expand...

The fact that all 8 of them died within minutes of transferring them from the medication bath to the rinse leads me to believe that it was almost definitely the transition that killed them. I am very surprised that the transition seemed to effect the boesemanis so drastically but that none of the guppies were effected.
1 - 9 of 9 Posts
Join the discussion
Continue with Facebook
Continue with Google
or sign up with email
About this Discussion
16 Replies
6 Participants
Last post:
anewbeus Jun 4, 2015
The Planted Tank Forum
A forum community dedicated to Aquatic tank owners and enthusiasts. Come join the discussion about flora, fauna, health, housing, filters, care, classifieds, and more!
Full Forum Listing
Explore Our Forums
Tank Journals General Planted Tank Discussion Equipment Fish Shrimp & Other Invertebrates
Recommended Communities