Joined Feb 24, 2016
·
4 Posts
Hey! I should have posted this earlier in the process, but I'll fill this first post in with some of the details from my offline journal, then I'll try to keep this up to date going forward.

This is my first attempt at a [iwagumi] planted aquarium. I spent a lot of time researching, which seems to have paid off. Not that it's been easy, but I've been pleased with the results so far.

I don't know if this is high tech or low tech. Maybe it's somewhere in between ... mid tech? Hah 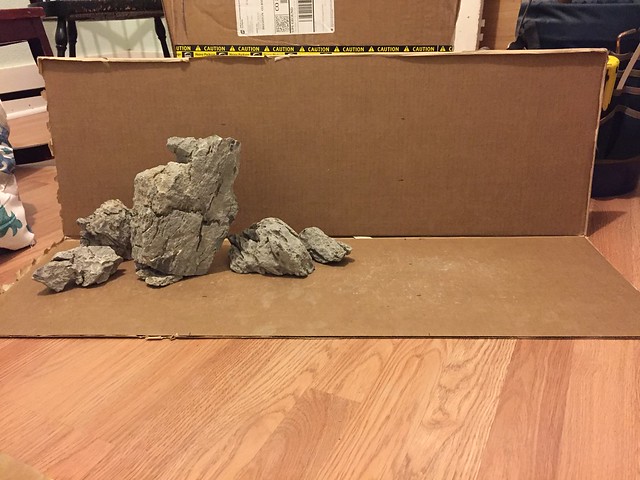 I played a lot on this cardboard that came with the aquarium (same dimensions). I marked thirds on the bottom and back for reference as I was placing things. 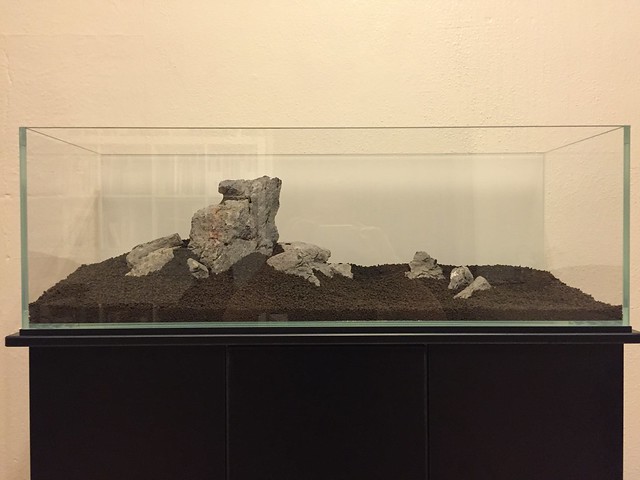 Then I kept playing with the hardscape arrangement in the aquarium as well. This is basically the final hardscape, minus a few tweaks.

Based on everything I saw and read, I was really trying to focus on thirds, a slope from front to back, the mid-ground, and good contrast among the rocks and between the hard and softscape.

I wanted a really pronounced hill on the left, so once it looked good I piled on more in case the soil compressed. I could have wetted the soil a bit to build it up even more, but it seemed like it would be hard to make adjustments with wet soil, and it's my first time. So I opted for keeping it dry in case I made mistakes. Anyways. I wish the hill was a bit taller, but I'm alright with it as is. 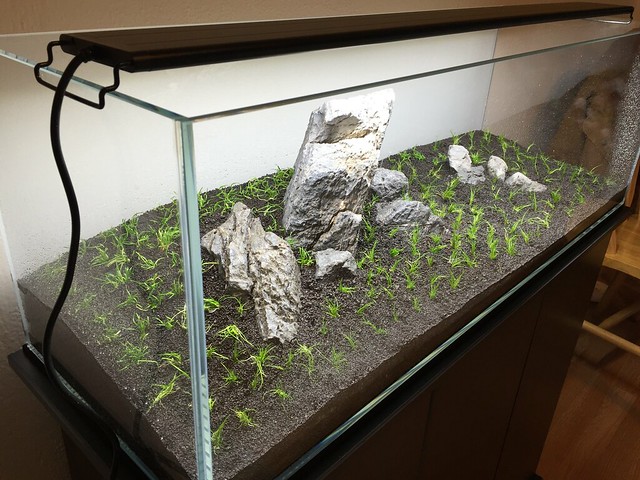 I took my time planting over three days. It's more work than I thought! Eleocharis in the foreground and Lilaeopsis towards the back, left.

I did a dry / emersed start for one week with a 10-12 hour photoperiod, so the roots could take hold a bit (not sure if it made any difference).

I flooded the tank with air tubing (no newspaper or plastic) on Friday, March 4th. Overnight I ran the filter with Purigen and a fine white pad to clear the water some, but it wasn't too cloudy to begin with. 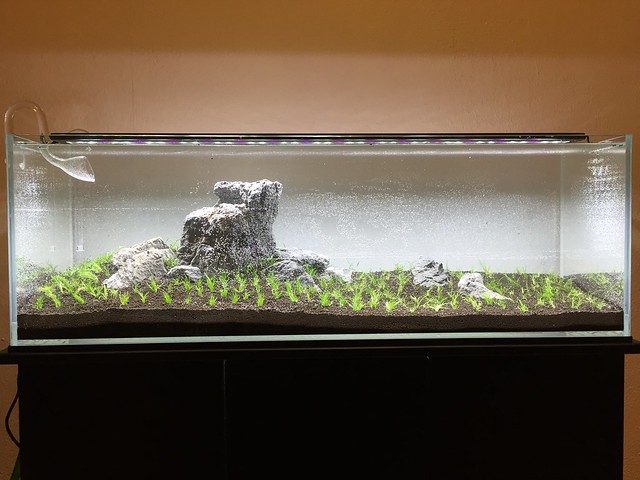 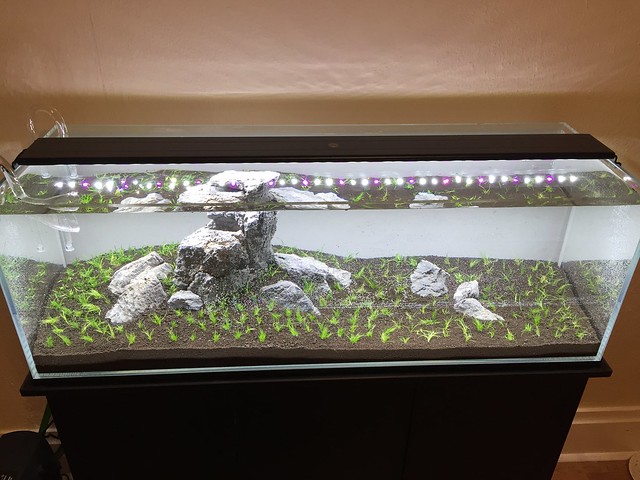 This is the day after flooding, Saturday, March 5th. I redid the filter with all of the media, hooked up the CO2 and set it around 4-6 bps (just a guess; impossible to count). I started with a six hour photoperiod, 40% daily water changes (first week), light ei-type fertilizing.

A few days after flooding I noticed the plants yellowing a bit, so I turned the CO2 down to 3-4 bps, increased the photoperiod to 10 hours, and went right into the full ei dose for 20-40 gal aquariums. I don't think they were getting enough light or fertilizer. The plants started to do much better after that adjustment. 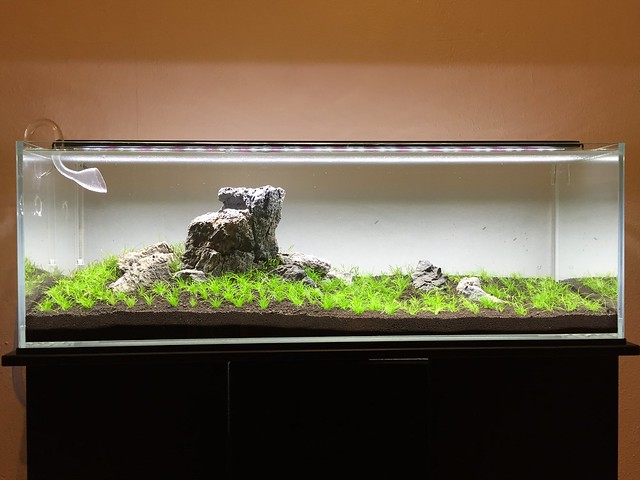 This is one week after flooding, at which point I went to 40% wc every other day. 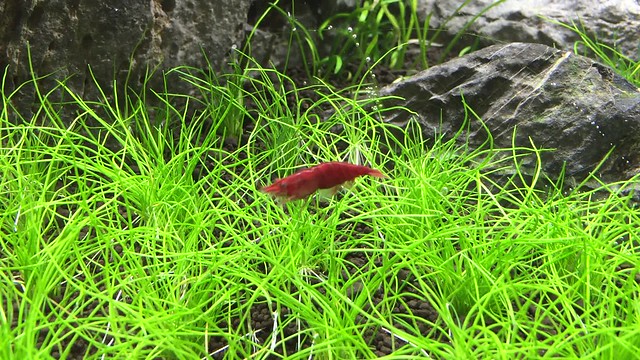 A bit of algae was growing after the first week. I was monitoring the water params closely, and things looked pretty good, so I added some shrimp at 1.5 weeks (2.5 weeks including emersed); possibly a week early. Right as I got them I noticed the nitrites were a bit more than I wanted, so I've been doing small, daily water changes, and the shrimp seem to be doing well. They arrived with some baby fry, and those seem to be good too. Next time I will probably wait at least another week, though, or until I can verify the nitrites are trailing off. 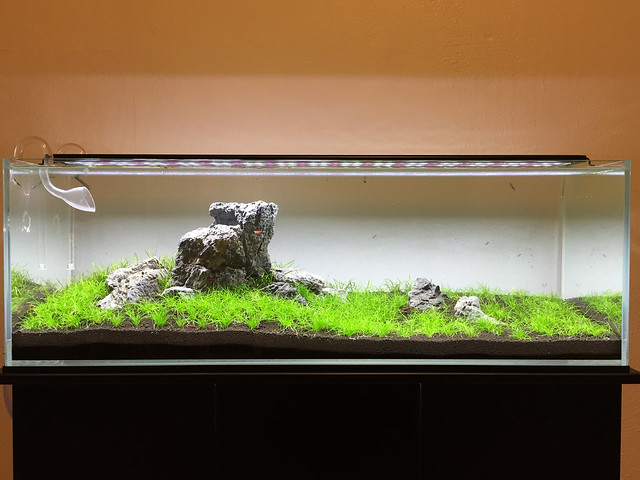 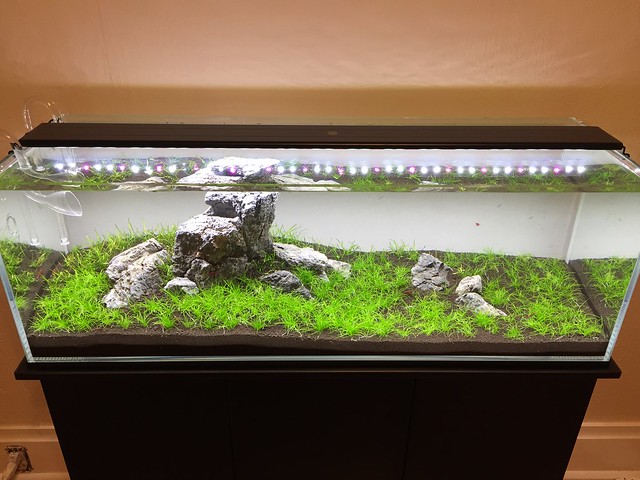 Fast forward: here it is two weeks after flooding (minus a couple days since I took the photos two days ago). You can see one of the shrimp swimming past the primary stone. The shrimp cleaned the rocks really well and fast!

I'm pretty happy with the aquarium so far, and I can't wait to see how it progresses. I'm thinking I need to do some trimming soon, but I don't want to pull anything out accidentally.

Let me know what you think or if you have any feedback. Thanks!
B

Joined Dec 3, 2015
·
50 Posts
That tank is sweet! Im looking to do something like that very soon. I love the clean look to it. Keep us updated
J

Joined Sep 10, 2013
·
111 Posts
Hey i got a very similar thing goin right now, i finished planting it on monday and man i love the look of this tank, i might go 2 weeks emersed growth, but im growing more impatient by the day


Sent from my iPhone using Tapatalk

After posting I decided to look up high tech vs low tech, and found two different sources with similar definitions which made sense to me. Apparently this *is* a high tech aquarium.

Sounds like low tech would be: normal / average lighting, no [pressurized] CO2, and no fertilizers. And I guess if one or two of these are introduced or above average, then it could be considered a hybrid (in between high and low) aquarium.

Tank looks awesome though. Super clean and the color of the grass is amazing. I tried to do the iwagumi scape and failed. My DSM didn't work, flooded and then ran out of CO2 and never had time to get it filled. Everything died.

I just love having a ton of different plants. And usually becomes a Dutch Jungle. Haha

Sent from my VS990 using Tapatalk

Joined Oct 14, 2009
·
380 Posts
It almost bothers me a little how much I like this tank layout, considering it's a first attempt. But it kinda seems to me like some of the smaller rocks might eventually be mostly swallowed by the grass. Maybe it's a result of the photographing angle, but are you planning on aggressively trimming, or were you maybe going for sort of a rock-mostly-buried-in-a-field look?


Dr. Acula said:
It almost bothers me a little how much I like this tank layout, considering it's a first attempt. But it kinda seems to me like some of the smaller rocks might eventually be mostly swallowed by the grass. Maybe it's a result of the photographing angle, but are you planning on aggressively trimming, or were you maybe going for sort of a rock-mostly-buried-in-a-field look?
Click to expand...

Yes, they are a bit low. As it's growing out that's one thing I wish I had done a bit different. I wanted a few stones to be partially covered, but not all of them. However, in real life I think they are a bit more visible than in my iphone photos, so I'm alright with it for now. Once I start trimming I probably will cut the HG pretty low to offset that issue.

bereninga said:
I like the look! However, it'll be hard to tell from a distance the DHG and Lilaeopsis Brasilensis.
Click to expand...

Yeah, there isn't a ton of contrast between the two in terms of blade height and size, but just enough ... the HG in the front is pretty low, then the rocks, and then the lilaeopsis in the back, so I think it actually builds a good, subtle depth, I hope haha. Plus the sword is a slightly darker green too. It's definitely very subtle, though.

... Alright, on to some updates. It's been 2.5 weeks since the aquarium was flooded. 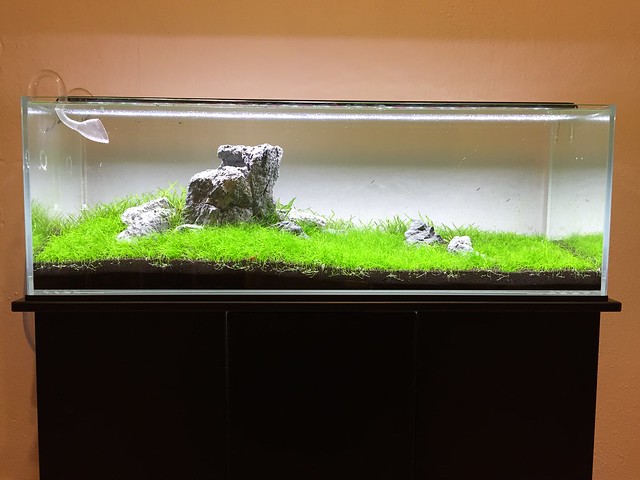 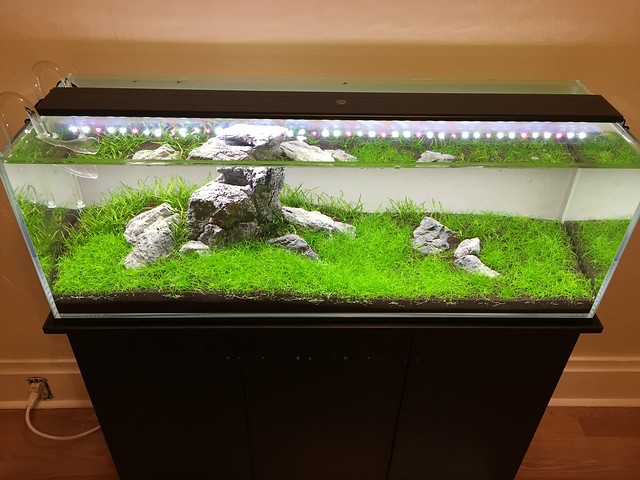 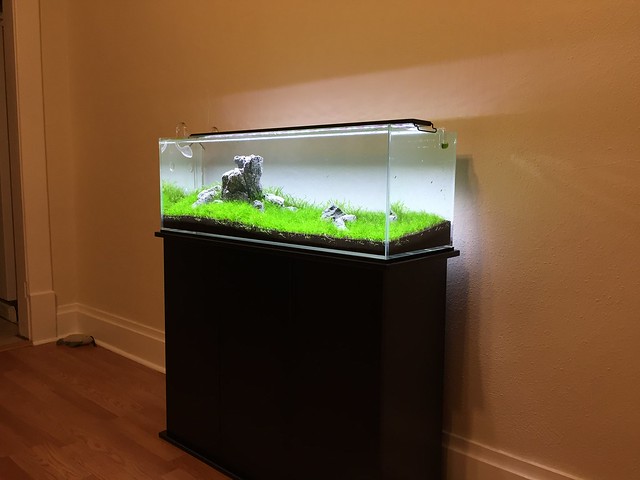 Plants are doing great. This is the view from my couch where I see it most frequently. I should probably get a real camera or have someone shoot it for me one of these days.


There's a decent amount of algae growing on the grass blades, so I've made some adjustments that I hope will have an effect over the next several days.


The shrimp ... well I covered the outflow pipe with a fine mesh bag several days ago, because there were babies. Water flow was fine at first, but really slowed after a few days. Yesterday I lost a couple shrimp when the water was slowest, and the rest were in a trance. I assume it was CO2 gassing. I removed the mesh bag and did a quick 25% water change. Once the water was flowing normally again some of the shrimp perked up. Today, some are grazing and others appear to be in a trance; might be too late for some of them, sigh.

Anyways. Thanks again for viewing and leaving your feedback!
T

Joined Mar 21, 2016
·
14 Posts
I got the exact same tank and man do I love the dimensions for it. It feels perfect. Your setup is looking really great. How do you like that hydor heater?
J

Octopoda said:
I got the exact same tank and man do I love the dimensions for it. It feels perfect. Your setup is looking really great. How do you like that hydor heater?
Click to expand...

I like the dimensions too. However, with such a long tank I noticed there are some slower spots. I think if I would have chosen a smaller filter (smaller than the 2215) the water flow would have been too low and possibly an issue. For anyone considering a long tank, make sure you get a decent size pump. I probably could have gone with the 2217 too, and increased the movement throughout a bit more.

The heater is great. It's so nice to have it outside of the aquarium.

It's hard to fit the heater between the top of an Eheim and the aquarium, so I installed it on the hose flowing into the filter. I saw a few photos and videos where other people installed it this way, and so far it seems to be working fine.

Initially I was concerned the heater might reduce the water flow. I've had some cavitation in the filter, I believe, but I also installed the double-tap (quick-disconnects) too. I think that's too many fittings on the one side, so next time I clean the filter I'm going to remove the double-tap connector. Because of all the fittings the hoses were stressed and bending a bit too. Even just straightening everything helped reduce the cavitation, so I'm pretty sure once I remove the double-tap, the cavitation issue will go away completely.