I added some MTS and typical-ramshorn snails that I rescued from the previous tank, and they seem to be doing well enough.

I've also noticed at least two odd snails - they are only ~1/8 to ~1/4" in diameter, and are much 'flatter' then the typical ramshorns.

I haven't been able to get a real good view of them yet, let alone a picture, but I can try if either of them decides to make themselves presentable in the near future.

Mostly, I just wanted to see if anyone had any idea of what I was talking about, or knew anything about these little critters.
lochaber is offline
Quote Quick Reply
post #2 of 11 (permalink) Old 01-01-2014, 08:23 PM
kcoscia
Wannabe Guru

(View User Tanks)
PTrader: (23/100%)
Join Date: Jul 2013
Location: Massachusetts
Posts: 1,325
I have a similar situation in my ramshorn only tank. See, I want it ramshorn only. Some bladder snails snuck in though. There are some babies that could be one or the other, but they're so small I can't really tell if their whirls invert or not.
kcoscia is offline
Quote Quick Reply
post #3 of 11 (permalink) Old 01-01-2014, 08:29 PM
nyxkitten
Planted Tank Enthusiast 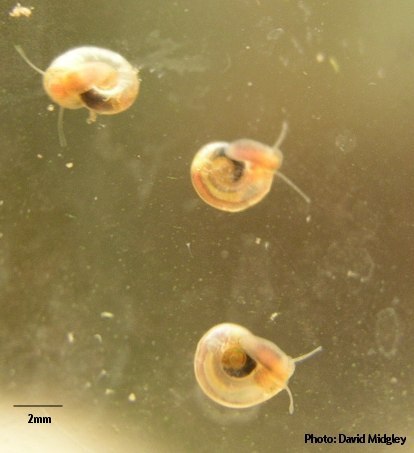 I went and managed to track one of them down, and got a couple (bad) cellphone pics. Here's the most presentable one. It's right next to a pretty much full-grown pond snail, and there's a mid-sized MTS on the filter sponge nearby.
Then I found some in the filter, and took a (again, bad) pic next to a penny for scale.
lochaber is offline
Quote Quick Reply
post #5 of 11 (permalink) Old 01-01-2014, 09:29 PM
Soothing Shrimp
Planted Tank Guru

Quote:
Originally Posted by msjinkzd
They sound like Planorbis arnoldi- mini ramshorn snails. They are kind of neat really
Nonetheless, I still pick the out or crush their shells when I get a chance.
Last edited by jrh; 01-01-2014 at 09:43 PM. Reason: added info
jrh is offline
Quote Quick Reply
post #7 of 11 (permalink) Old 01-01-2014, 09:48 PM
SueD
Planted Tank Enthusiast

My google skills are a bit sub-par, so I couldn't really find too much info on my own, all though I did run across at least 4 different snail blogs, all of which seemed to be posted to fairly regularly. kinda interesting

jrh>any clue what thread that was you quoted? I'm not having much luck with the search function here. (but I did find another thread that sounds like the same critter, and it was also named as Planorbis arnoldi)

SueD>anything special, or are they like most snails where they will establish a population if they are ignored?

Thanks again for the replies everyone. I tend to be one of those pro-snail people, so I was sorta excited to find a new type in my tank. I only noticed two at first, but then found another two in the filter (moved to tank), so hopefully I'll get a population of them. diversity and all that

jrh>thanks. I've run across her postings in a few threads, and she does seem to know what she is talking about, so I appreciate the input. If I ever manage to get around to completing my 40B paludarium, I'll probably look to ordering stuff from her.

And, to anyone else, thanks for reading, I'm fairly certain that what I was looking at is Planorbis arnoldi, and I'll try to remember to post more pics/info if anything changes.
lochaber is offline
Quote Quick Reply