(View User Tanks)
PTrader: (0/0%)
Join Date: May 2015
Location: Forest City ON, Canada
Posts: 2,430
Cherry Shrimp / Tiger Shrimp With Aquasoil / Active Substrate
Please, no rants or arguments regarding "ideal KH, GH and pH" - I can look those up on google and I'm severely off-put with the amounts of arguments I was reading. I would like some tangible experience shared please. Pics are always welcome

What are your experiences with colonies of neo's running in a tank with an active substrate? What were those parameters? CO2 or no CO2?

What are your experiences with colonies of tigers running in a tank with an active substrate? What were those parameters? CO2 or no CO2?

Are you remineralizing RO water or running tap? What are those parameters? Large or small water changes?

What other inverts do you have living well within that tank? Rabbit snails, Nerite snails, Amano shrimps etc. etc. ?? 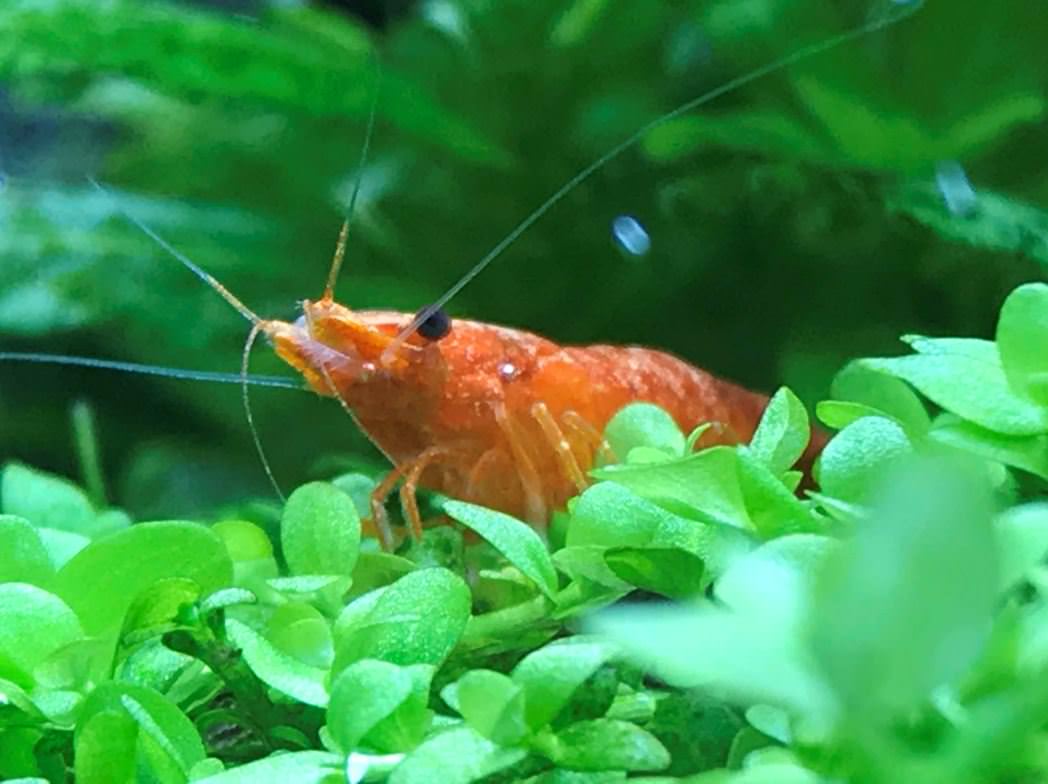 
To view links or images in signatures your post count must be 10 or greater. You currently have 0 posts.
Quagulator is offline
Quote Quick Reply
post #2 of 8 (permalink) Old 11-23-2020, 09:16 PM
Sam the Slayer
Planted Member

I dont know, however, if the softer water lowers the life expectancy of the shrimp themselves. I think it might.

The OEBT and OERT did not do well for me and Im not sure why because tried both RO and Tap.
Quagulator likes this.
To view links or images in signatures your post count must be 10 or greater. You currently have 0 posts.

(View User Tanks)
PTrader: (0/0%)
Join Date: Mar 2016
Location: Nevada
Posts: 3,289
What are your experiences with colonies of neo's running in a tank with an active substrate? What were those parameters? CO2 or no CO2?

No substrate, no filtration, no air circulation....

I've added some to the actual tank now, not sure how well they're thriving yet...


What are your experiences with colonies of tigers running in a tank with an active substrate? What were those parameters? CO2 or no CO2?

If you can consider YKK's to be "tiger's", well, it's taken a long while but I finally have a thriving colony. Tons of babies and several berried adults. Even threw in some fish (pygmy cories, kuhli loaches and a BN pleco) and so far, still have a lot of babies.

It's SL-Aqua substrate, I've measured pH as low as 5.5 although I'm not sure what current pH is at.


Are you remineralizing RO water or running tap? What are those parameters? Large or small water changes?

Remineralized RO water. Not a smart idea to use tap water. Water changes vary from small to large. Just whatever I feel is necessary. May be doing more large water changes now that there's fish in the tank.


What other inverts do you have living well within that tank? Rabbit snails, Nerite snails, Amano shrimps etc. etc. ??


(View User Tanks)
PTrader: (1/100%)
Join Date: Dec 2019
Posts: 83
Up until recently neos were the only shrimp I had. All of the tanks I have them in used Fluval Stratum as the substrate. On the packaging it claims to be a buffering substrate but I haven't really noticed a difference between what comes out of my tap and what sits in the tank. All of my shrimp tanks are filled with tap and none use CO2. I like to try to keep things as simple as possible. Depending on the tank, they are housed with Amanos, MTS, Nerite Snails and Mystery Snails as their invert partners. My largest tank has them housed with green neon tetras, corydoras habrosus and a pair of GBRs. They all seem to get along pretty well and the shrimp population has exploded. About their tankmates the only real die-off I've noticed is bladder snails. Once upon a time they were absolutely everywhere and recently I've noticed that there is maybe 3-4 total bladder snails between as many tanks. Not sure if the MTS I introduced have just out-competed them or if its something else.


The shrimp in all my tanks have thrived marvelously in these parameters. Just got some mischlings from a member on this forum that I wanted to try on these parameters so we'll see how the caridina like it. Heres a pic of one of my shrimps in my 29g. Was too lazy to find the remote to turn the light in the tank on so apologies but I think the shrimp look pretty nice even in the dark!
Quagulator likes this.
Last edited by IKeepShrimp; 11-25-2020 at 01:52 AM. Reason: Forgot to mention the Amanos!
IKeepShrimp is offline
Quote Quick Reply
post #6 of 8 (permalink) Old 11-25-2020, 09:33 PM
Monster Fish
Planted Tank Guru

(View User Tanks)
PTrader: (45/100%)
Join Date: Mar 2011
Location: Queens, NY
Posts: 3,327
What are your experiences with colonies of neo's running in a tank with an active substrate? What were those parameters? CO2 or no CO2?
I don't use active substrate with my green jade neos just blasting sand. Parameters varies but the pH is 7.4 or higher, TDS 300 or higher, no CO2

What are your experiences with colonies of tigers running in a tank with an active substrate? What were those parameters? CO2 or no CO2?
I don't use active substrate with tigers but blasting sand. I keep pure, wild type tigers though. TDS from 220 to 400 PPM. GH 7-10. pH 7.2-7.4, basically neo parameters. No CO2 either.

Are you remineralizing RO water or running tap? What are those parameters? Large or small water changes?
Remineralized tap. Before anyone goes crazy, my tap comes out at ~45 PPM, GH 0-1, KH 0-1. Large water changes once a month.

What other inverts do you have living well within that tank? Rabbit snails, Nerite snails, Amano shrimps etc. etc. ??
Ramshorns and mini ramshorns. Wish I didn't have the latter though.
Quagulator and Zoidburg like this.
The Fraternity of Dirt #112

(View User Tanks)
PTrader: (0/0%)
Join Date: Jun 2020
Location: Singapore
Posts: 375
Quote:
Originally Posted by Quagulator View Post
What are your experiences with colonies of neo's running in a tank with an active substrate? What were those parameters? CO2 or no CO2?
All my tanks use Amazonia substrate; pretty much the default option here in Asia (Singapore) and I've not met anyone that would think of using anything other than active substrate. (My local breeder uses either bare bottom tanks for all shrimp types, but these all have air-stone driven filter boxes at the back filled with active soil to control pH). Everyone wants to be Mr Amano Jr so the ADA approach is king!

This is my CRS tank; the latest tank I setup and now about 4 months old I guess. Amazonia substrate and this time around I have added zero KH at any point in an attempt to maximise / preserve the buffering effect and keep the pH low (I've added small amounts of KH at some point to all my other tanks, either in the form of tap water (1-2KH), chemical buffer when pH initially went super-low and stalled the cycle, or from rocks in the tank). This one has been purely RO (remineralised to 5-6GH with SS GH+) with no rocks.

The tank is overgrown at the moment as there are CRS new born shrimplets in there so I don't want to move, remove or change anything!

Tank and water specs:
In another tank, the first I had setup: My original RCS colony had dwindled to about 5 mature adults plus one young adult rili that crept in as a baby with other shrimp. They never bread in "ideal" neo water conditions, I think because either they were all male/female (still can't sex them!) or somehow infertile. Decided to change this to Goldenback neo tank. The rili became berried as soon as I introduced the Goldenbacks!

So, finally getting to your original question:
The 5x RCS and 1x red rili neo that I transferred to my CRS tank are doing great, in fact I would say they are looking better than ever! The rili remained berried and gave birth to some nice "wild type" shrimplets.

The tank, CRS and neo's are all doing great at the moment! CRS berried and shrimplets occasionally spotted, but mostly hidden in the moss. Neo baby now juvenile and getting more adventurous. Not a single shrimp death in this tank, all growing and moulting fine. Colours great, shrimp active and happy, constantly grazing (they don't really bother with any food I add, so I only really feed the fish a little). I will say that the RCS are not breeding, but then they never did in "ideal" neo parameters either so think they're all either single sex or infertile. The berried rili carried her eggs and gave birth in the CRS tank, but hasn't become re-berried (presumably because she is now away from Mr Goldenback that previously did the honours in the other tank).

Hopefully that answers all your questions @Quagulator with honest, personal experience? I've tried to mention everything, but let me know if I've missed anything.

My current thinking (personal opinion based on recent experience):
- ignore most internet info regarding neo water parameters, mostly regurgitated and out of date
- modern neo's quite different to ancestors from few years back, much hardier and more adaptable
- ask breeder what water param's they were bred in, then use this as baseline
- shrimp lines vary around the world (Asian shrimp different to US ones, so ask locally not globally)***
- neo's can survive (maybe even thrive) in pretty much any water conditions
- tank stability and maturity most important
- diet other very important and often overlooked factor
- slow drip acclimation important when adding to tank

*** This may invalidate everything I have said above depending upon where in the world you are!

Regards, James (Brit keeping shrimp in Singapore)
Quagulator and IKeepShrimp like this.
To view links or images in signatures your post count must be 10 or greater. You currently have 0 posts.
en7jos is offline
Quote Quick Reply
post #8 of 8 (permalink) Old 11-26-2020, 04:56 AM
SardinePatheNews
Algae Grower


(View User Tanks)
PTrader: (0/0%)
Join Date: Nov 2019
Location: UK
Posts: 81
neos (BM) , stratum , no co2, very hard tap water cut with RO to bring gh down to 8, some tiny ramshorn type snails that hitched in on a plant, they dont seem to grow bigger than a few mm in any of the tanks theyve spread to. Colony has thrived and continues to do so 2 years on after the stratum's buffering has expired and i've not replaced it as only used it as simplest option for next day delivered black substrate
Quagulator likes this.
SardinePatheNews is offline
Quote Quick Reply