(View User Tanks)
PTrader: (13/100%)
Join Date: Feb 2008
Location: Asheville, NC
Posts: 3,010
Panacur-C vs Planaria Zero, the test
I've mentioned in my tank journal that both of my Dennerle Shrimp King tanks have been infected with white planarian worms. I ordered Planaria Zero since both it and No-Planaria are made from Betel nut extracts, and the latter product had a longer shipping date. As luck would have it, I had fenbendazole on hand form a prior outbreak years back and it was still in date, so I decided to use both products, one in each aquarium. I am also treating a 3rd tank with Planaria Zero, but it has inert substrate and so won't be part of any comparison I'm able to do between these two.

I am almost 24 hours into the first treatment. I fed shrimp first in hopes to get some idea of a head count as well as to coax a few flatworms out. Not many shrimp in either tank, I'd say a dozen each at best. And whether it's planaria or an unrelated reason, the shrimp in these two are really laying low lately. I've doubled the light on both of these tanks and perhaps that's a factor but I'm skeptical. At any rate, these tanks have living shrimp and 3 types of snails; trumpets, pond, and ramshorn. 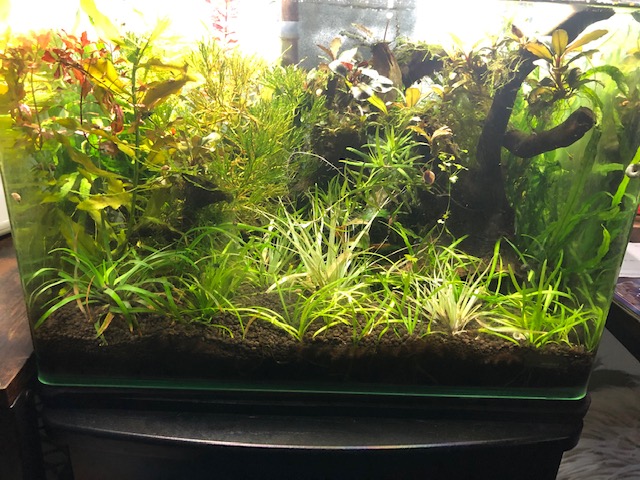 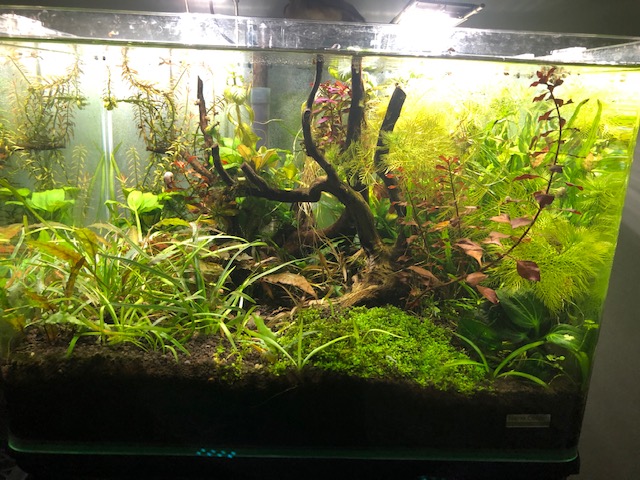 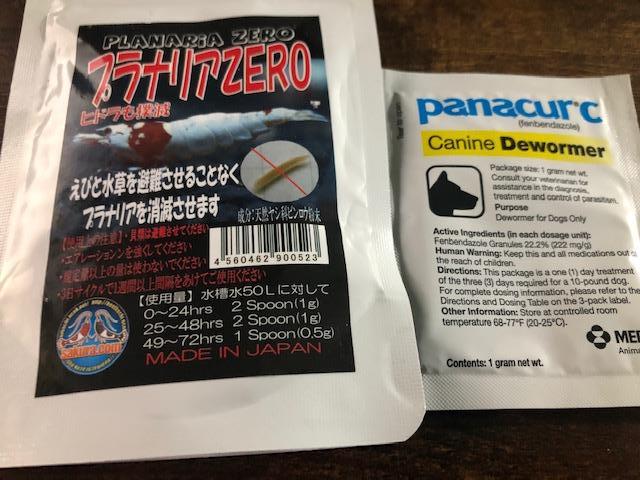 I started with adding the Planaria-Zero to tank one. Snails reacted and retracted into their shells. The couple of planaria I saw began to go deep into the substrate. Seemed encouraging, so on to tank #2. Almost instantly upon adding the Panacur, I watched a planarian stretch then retract and distress and freeze on the front glass. To my surprise, it's still there today, though didn't budge after a light touch with a plastic straw. 96.6% sure this worm has died.
The planarian (even with my macro lens, couldn't focus on it): 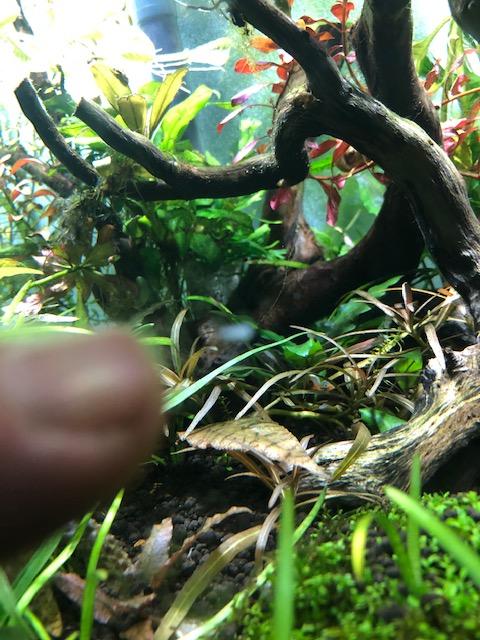 Obviously, I can't say anything about how these two treatments compare on day one. I can say that the Panacur did seem to nuke the ones that were out in open water and the herbal extract made them flee into the substrate though. Snails are present and seem sluggish (no pun intended) in both tanks. If I had to say, they are moving more in tank #2 treated with Panacur. I haven't seen a trumpet snail out in either tank. Tank #2 also has no pods on the glass at all that I can see, tank #1 however, still does. In one hour, it will be time to repeat the dosage. I'll update if any major changes afterwards, as well as how both of these fare in the weeks/months after treating. Hopefully there will be something learned that can help us going forward. Thanks for reading.
Nothing good happens fast in an ecosystem.
Blue Ridge Reef is offline
Quote Quick Reply
post #2 of 6 (permalink) Old 10-10-2020, 05:25 AM
en7jos
Planted Tank Obsessed

Makes sense I guess for the "medical" fenbendy to work more instantly and the "herbal" betel nut option to be more gradual.

For the record and future ref, could you please note your doses given / tank volume? And also what types of shrimp are in the tank?

Kind regards, James
Blue Ridge Reef and mfgann like this.
To view links or images in signatures your post count must be 10 or greater. You currently have 0 posts.
en7jos is offline
Quote Quick Reply
post #3 of 6 (permalink) Old 10-10-2020, 09:00 PM Thread Starter
Blue Ridge Reef
snails are your friend

(View User Tanks)
PTrader: (13/100%)
Join Date: Feb 2008
Location: Asheville, NC
Posts: 3,010
Good point! I dosed according to what seem to be agreed upon internet instructions since there were no directions in English on the Planaria Zero and only by weight of a canine on the Fenben. I am dosing these estimating that there is 9 gallons of water volume on tanks 1 &2, and 40 gallons on tank #3 (which isn't really part of this comparison).

Tank two: Neocaridina davidi (goldenback yellow color), Caridina cf. cantonensis sp. 'Blue Tiger' (orange eyed royal blue tiger)
Dosed with .1 gram of 22.2% Fenbendazole, premixed into RO water. I remembered from last time that this stuff does not dissolve easily. Dosed same amount after 24 hours. I had read both 24 and 48 hours for the 2nd dose and decided to just do them on the same schedule.

Tank three: Neocaridina davidi (blue dream color), Caridina multidentata (Amano shrimp):
Dosed 4 grams of Planaria Zero, deliberately underdosing as I'd read that a 50% dose was effective for many tanks and I didn't want to disturb this one more than I had to with injected CO2 on top of medicating.


Day 3 (early) update.
Tank #1:
I can see a few worms in tank #1 but they seem very unhappy. None are above the substrate line nor moving much. 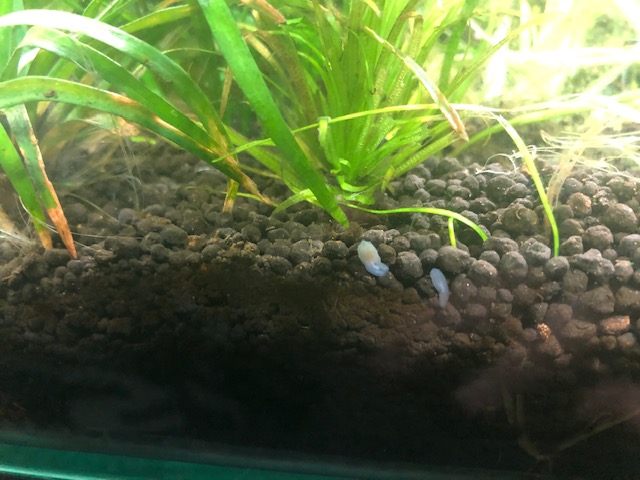 Tank #2:
I cannot find a single planarian. That's not to say that there aren't any, but the one that was on the glass yesterday is a white stain at this point. I tend to think that Fen Ben is faster-working, though that's not indicative of being more effective long-term, nor safer for fauna.
Tank #3:
Is a 45 gallon with Eco Complete inert substrate. Still active planaria in this one. Perhaps I shouldn't have underdosed and it will receive a full dose tonight.
Nothing good happens fast in an ecosystem.
Blue Ridge Reef is offline
Quote Quick Reply
post #4 of 6 (permalink) Old 10-15-2020, 11:44 PM Thread Starter
Blue Ridge Reef
snails are your friend

(View User Tanks)
PTrader: (0/0%)
Join Date: Jun 2020
Location: Singapore
Posts: 362
I wonder with the betel nut extract treatments whether it is less effective against planaria that are hiding in the substrate? The Panacur would seem to be pretty much instant take-down upon any exposure, but perhaps the betel nut extracts don't reach high enough concentrations down in the substrate to be fully effective. So maybe worms on the glass get hit, but those in the substrate might get lucky? I wondered this when lots of trumpet snails emerged unscathed from the substrate a few days after I treated the tank with 'No Planaria'. Maybe this is why you dose for several consecutive days (for 'No Planaria', the instructions are 100% dose day 1, 50% dose day 2 and 25% dose on day 3). Just a thought...

Interested to hear your final conclusions in a few weeks time. Any effects seen with either treatment on shrimp at all?

Regards, James
Blue Ridge Reef likes this.
To view links or images in signatures your post count must be 10 or greater. You currently have 0 posts.
en7jos is offline
Quote Quick Reply
post #6 of 6 (permalink) Old 10-17-2020, 05:59 PM Thread Starter
Blue Ridge Reef
snails are your friend

(View User Tanks)
PTrader: (13/100%)
Join Date: Feb 2008
Location: Asheville, NC
Posts: 3,010
Quote:
Originally Posted by en7jos View Post
Interested to hear your final conclusions in a few weeks time. Any effects seen with either treatment on shrimp at all?
The biggest being that after big water changes I'm spotting some with failing molts (WRoD), which was something I thought I had behind me. The 45 still has a few active planaria, guess I'll be treating it with Panacur soon. Your substrate thoughts seem likely. That tank has 4"+ of substrate. I'd have thought if it dissolved in water that it would get anywhere that's wet, but it's not looking that simple.
Nothing good happens fast in an ecosystem.
Blue Ridge Reef is offline
Quote Quick Reply