(View User Tanks)
PTrader: (8/100%)
Join Date: Oct 2013
Location: DFW, TX
Posts: 536
DHG Turned White.. Salvageable?
So I bought DHG from here. It came in looking half alive. I stuck it in the tank (ferts, co2, and light) but it started floating and I didn't fix it for 2 days. Now it is completely white. It looks like a bunch of roots now. 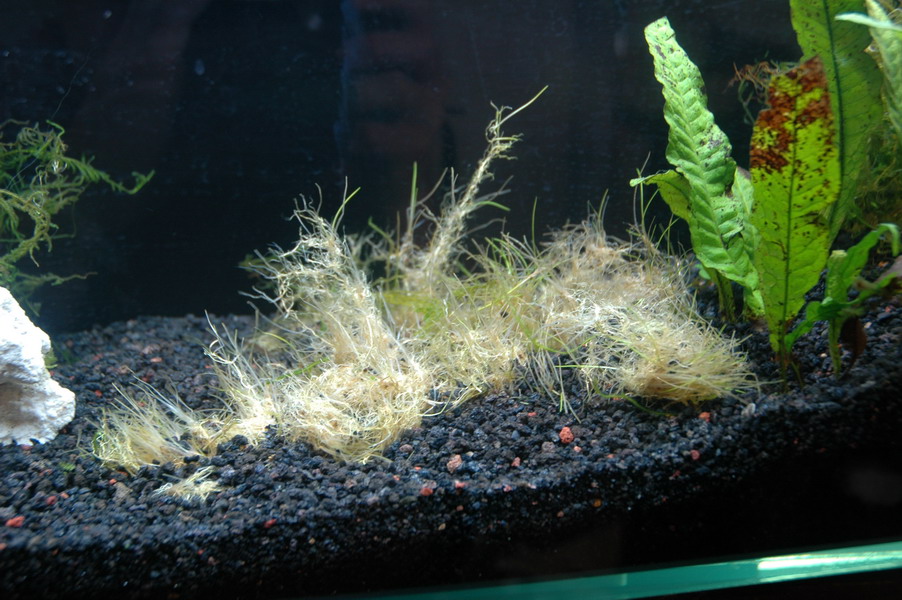 (View User Tanks)
PTrader: (3/80%)
Join Date: Jul 2013
Location: Sullivan, MO
Posts: 202
Looking at your other plants, it looks like your plants aren't getting correct nutrients?
To view links or images in signatures your post count must be 10 or greater. You currently have 0 posts.


(View User Tanks)
PTrader: (2/100%)
Join Date: Dec 2013
Location: Beaverton, OR
Posts: 103
Mine did the same thing. I bought a TC package from petsmart that was green. Didn't have time to separate it and do the lawn thing, so I just stuck the entire patch down. Did great for a while, then started turning brown. Then after awhile little green sprouts came out.

I tried separating it last night but it was a mess so I just pulled them apart into 5 chunks and threw it back into the tank. Looks horrible but hopefully they make it. I should have separated it from the beginning. It's okay as my tank is still cycling so decaying matter is a plus.
vanz is offline
Quote Quick Reply
post #7 of 15 (permalink) Old 01-29-2014, 10:48 PM
happi
Planted Tank Guru

this is what happen to my DHG when added to the Eco complete
DIY Trace/Micro/Macro Recipe
To view links or images in signatures your post count must be 10 or greater. You currently have 0 posts.


DIY Trace/Micro/Calculation Etc
To view links or images in signatures your post count must be 10 or greater. You currently have 0 posts.
happi is offline
Quote Quick Reply
post #8 of 15 (permalink) Old 01-30-2014, 12:47 AM Thread Starter
rdmustang1
Planted Tank Enthusiast

(View User Tanks)
PTrader: (1/100%)
Join Date: May 2013
Location: USA
Posts: 137
i would trim as much of the brown dead stuff as you can off, leave the green and leave the roots
there is an ever so slight possibility that some if it will survive

(View User Tanks)
PTrader: (8/100%)
Join Date: Oct 2013
Location: DFW, TX
Posts: 536
Quote:
Originally Posted by dmagerl View Post
Is that a Java Fern with buried rhizome on the right? That's not good.
Yes, I basically threw everything in real fast and wasn't thinking. Thanks for catching that. All better now

(View User Tanks)
PTrader: (1/100%)
Join Date: May 2013
Location: USA
Posts: 137
I did a dry start with some DHG in a small 8 gallon tank
they did ok, the old growth started to die off but new little green sprouts started to pop up in and around the brown stuff
After a while i had a serious mold/fungus issue, lots had white growth on them
I cleaned off what I could and moved them to a 10 gallon established tank
I lost about half to fungus
After a few days about half the brown leaves turned back to green!! I was amazed by this
On top of that a lot of the new little leaves continued to grow as well
Theyre doing a lot better now
I wouldnt discount them as dead just yet, mine made a miraculous rebound but all mine had been planted and none were floating
I hope you get them to start growing again