Introducing myself, starting a planted tank
Hi everyone,

My name's Alex and I moved to West Haven, CT 6 weeks ago. Since I am not allowed to have dogs in my apartment, I thought I would set up a fish tank so I have some life in my apartment. I am working as a customer service engineer/network engineer for a medical software company. Before this I was living in the Detroit metro area and was unemployed 4 times in the last two years.

I want an opinion of the stuff I am planning to get for my tank. In my area there is a Petco and a fish store specializing in tropical fish and reptiles. There is also a Petsmart under contstruction.

As for fish and critters, I would like to get a few cory cats, some type of top-water fish, maybe a betta, shrimp and maybe a crayfish. Thoughts?
WestHaven is offline
Quote Quick Reply
post #2 of 139 (permalink) Old 06-30-2012, 05:04 PM
Willamette
Planted Member

1. It pays to overfilter. The claimed flow rating on filters are almost always a lie. Go heavy on filtration. My personal preference is for Aquaclear filters as opposed to Penguin. Don't have to mess with biowheels, and they really are quite good. You'll have a three stage set of media rather than cartridges, and you can get some really pretty good biological filtration out of them.

2. Read around these forums carefully in terms of the amount of lighting you use. You don't want an algae bomb.

3. Make sure you learn very thouroughly how the nitrogen cycle works. Buy an API Master Test kit. Learn about your water chemisty, and don't listen to the clowns at Petco when it comes to stocking. Make sure you learn how to properly cycle your tank before you add fish to it. It can take a lot of time, so patience is in order.

4. This is just a personal preference...but over the last couple of years I've become a strong advocate of dirt substrate for planted tanks. It really makes growing aquatic plants a no-brainer. Google around and read up on the Walstad method, and decide if its for you. As a beginner, perhaps you would benefit from a low tech tank, which has lower lighting, usually no CO2, and the dirt (capped with a thick layer of sand or gravel, of course). The plants grow exceptionally well, and you can avoid a lot of the fert dosing and high light/CO2 considerations that go with a high tech tank.

Cory cats are wonderful fish. Shrimp are a lot of fun. Bettas can be agressive, and I've seen them kill quite a few shrimp. I've finally given up on keeping bettas in community tanks, and have them isolated.

When it comes time to add fish, maybe try something very hardy in your new tank at first, such as some guppies or zebra danios. They will stand up to swings in tank conditions very well, and I think both are very nice fish.

This stuff is a lot of fun, and addictive. I think a lot of people are put off the hobby early on because they lack the knowledge of how to cycle their tanks, and how to manage algea. Take the time to read up on this stuff, (Don't listen to the people who are trying to sell you something. They are often ignorant or simply lying) and you'll be armed with the knowledge that can best help you avoid early problems.
Willamette is offline
Quote Quick Reply
post #3 of 139 (permalink) Old 06-30-2012, 05:19 PM
jeremyTR
Banned

1. It pays to overfilter. The claimed flow rating on filters are almost always a lie. Go heavy on filtration. My personal preference is for Aquaclear filters as opposed to Penguin. Don't have to mess with biowheels, and they really are quite good. You'll have a three stage set of media rather than cartridges, and you can get some really pretty good biological filtration out of them.
Great points and such but I have a Marineland and I don't have to "mess with biowheels" You put it in and leave it alone for forever. The extra beneficial bacteria it holds is a great...benefit, too.

(View User Tanks)
PTrader: (0/0%)
Join Date: Jun 2012
Location: Northern Michigan
Posts: 915
Thanks for the advice guys. I'm going to take this slow (I'm a patient person). I have been doing research on this for a few months since I discovered this site. I think a planted tank will work well for me because I will have to travel for my job every 1-2 months for a few days. Less maintenance is a good thing.

(View User Tanks)
PTrader: (0/0%)
Join Date: Jun 2012
Location: Northern Michigan
Posts: 915
I think right now, I would like low to medium light. I'd like to keep the costs on getting started as low as possible.

Today I went to Petco and picked up a 29 gallon tank from their $1 per gallon sale, a metal stand, and water conditioner/chlorine remover. Tomorrow I am going to go to the LFS to pickup the rest of the supplies.
WestHaven is offline
Quote Quick Reply
post #7 of 139 (permalink) Old 07-01-2012, 02:31 AM Thread Starter
WestHaven
Planted Tank Enthusiast

(View User Tanks)
PTrader: (0/0%)
Join Date: Jun 2012
Location: Northern Michigan
Posts: 915
Update: I have been doing a leak test on my tank for the last few hours and it is going well. Tomorrow I plan to drain it and go to the fish store and buy supplies and then start letting the tank cycle before I add some fish.

I am planning on ordering the Marineland double-bright LED light for my tank.
WestHaven is offline
Quote Quick Reply
post #8 of 139 (permalink) Old 07-01-2012, 02:50 AM
jeremyTR
Banned

Do you know how to do a proper fishless tank cycle?
40B - Shrimp tank

Do you know how to do a proper fishless tank cycle?
Agreed, I'm loving my Odyssea 2x39 watt light!
Eheim pimp #255

75 gallon semi-aggressive community tank with pressurized CO2, 8.6 gallon cherry shrimp tank
To view links or images in signatures your post count must be 10 or greater. You currently have 0 posts.
40 breeder reef

sounds like you're starting very responsibly!
i agree with not keeping bettas in community tanks, they really are unpredictable.
try to get at least six cories, they do best in groups.
CatB is offline
Quote Quick Reply
post #12 of 139 (permalink) Old 07-01-2012, 05:17 AM
Williak
Planted Tank Obsessed

Get ready to start planning the second heh! I got my first tank one month.... the next month, three more... now this month... planning another breeder tank

To view links or images in signatures your post count must be 10 or greater. You currently have 0 posts.
Williak is offline
Quote Quick Reply
post #13 of 139 (permalink) Old 07-01-2012, 02:50 PM Thread Starter
WestHaven
Planted Tank Enthusiast

(View User Tanks)
PTrader: (0/0%)
Join Date: Jun 2012
Location: Northern Michigan
Posts: 915
Ok I got a few questions. Today I'm gonna go to the store and get the rest of the stuff I need and start the tank cycling.

I should just add a bit of food each day until I see the ammonia start to register on the test strips right?
Do I need light on the tank in order for it to cycle? The only light I have is the ambient light in the room, and a small lamp that I only use at night.
What can I do to make the tank cycle faster?
WestHaven is offline
Quote Quick Reply
post #14 of 139 (permalink) Old 07-01-2012, 03:07 PM
Willamette
Planted Member

(View User Tanks)
PTrader: (0/0%)
Join Date: Jun 2012
Location: Corvallis, OR
Posts: 180
1. Don't use test strips. They are not accurate, or consitent. Buy a liquid drop test kit. If you've already got them, might as well use them when cycling, but its like trying to explore a cave with a candle instead of a spotlight.

I've heard it said that when fishless cycling it can help to leave the lights on 24 hours, but I really don't know why that would be. The bacteria in question are not photosynthetic, and to me it just seems like it would lead to more early algae, in addition to being bad news for whatever plants you are starting up with.

Something else you can do is to buy a single raw prawn at the grocery store and toss it in. As it decomposes it will release a steady supply of ammonia into the water.

Also, what you an do is seed your tank with biota from an established one. If no access to such, you can use a bottle of tetra smart start. It actually works, unlike most such products.

Raise your temperature up above 80 for the duration of the cycling. Higher temps lead to faster metabolic/reproductive acitivity among your bacteria.

Also, run air stones, and perhaps lower the water level in your tank if using a HOB filter, which will allow the water to splash in. This will oxygenate the water, and will lead to faster metabolism from the nitifying bacteria. This is not as recommended if you are starting with plants, however.

Make sure you are running your filters full blast for the duration. 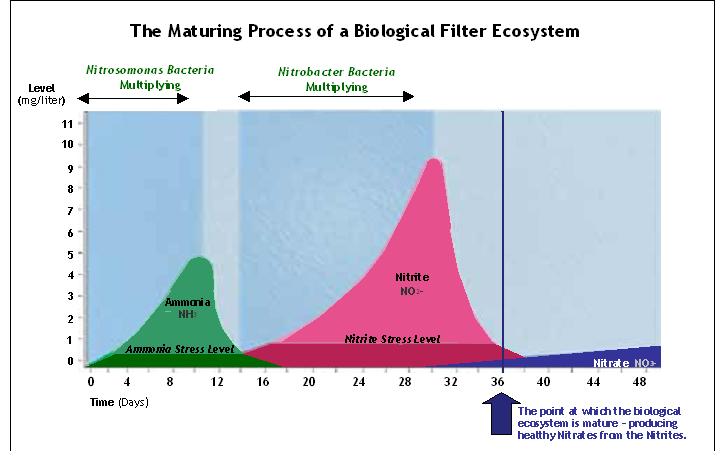 
(View User Tanks)
PTrader: (0/0%)
Join Date: Jan 2012
Location: Fort Smith, AR
Posts: 49
if you start your tank with both dirt and plants from the beginning, the nitrogen cycle will be very fast. I just started a 10g with scott's topsoil (1.5 inches) and play sand (1.5 inches). I planted it heavily from the start. One week later I had 20ppm nitrate and the tank was ready for fish. I have had the fish in for about 1 week now and I have not had any ammonia/nitrite spikes (testing every other day)

I am not going to guarantee that your cycle will finish this fast, but if you start with soil and plants, the soil contains all of the nitrifying bacteria that is needed for your cycle.
gelbschnee is offline
Quote Quick Reply