I have multiple 20 gallon tanks and I am trying to find a way using PVC pipes to make it easier to change water every week. I have been searching online but couldnot find the answer I need. I plan to have each pipe in each tank connected to a ball valve and use gravity to draw water out and then keep it in the pipe by closing the valve. My question is how long does it take the water to become stagnant in that portion of the pipe (from the end in the tank to the ball valve)? If it's a bad idea to keep water in the pipes for a week like that I can use a water transfer pump to prime everytime I do water change
lk7630 is offline
Quote Quick Reply
post #2 of 9 (permalink) Old 07-31-2020, 04:18 AM
Mark Fisher
Planted Tank Obsessed

(View User Tanks)
PTrader: (0/0%)
Join Date: Dec 2011
Location: Rockport, Texas
Posts: 453
If the water in the pipe gets flushed out and away into a drain (or outside), why does it matter? Perhaps I dont understand your setup? Is the water in the pipe going into your tank , or from your tank?
Mark Fisher is offline
Quote Quick Reply
post #3 of 9 (permalink) Old 07-31-2020, 02:48 PM
AbbeysDad
Wannabe Guru

(View User Tanks)
PTrader: (0/0%)
Join Date: Apr 2016
Location: Southern Tier of Central New York, USA (Finger Lakes Region)
Posts: 1,387
As Mark points out, the water in the pipe would be flushed out everytime the valve is opened so it doesn't matter how 'fresh' is is...
However, siphoning is 'okay' but I much prefer a submersible pump like the Ecoplus 396 for partial water changes as it's faster and less of an issue with height differences. Couple this pump with Python like hose and quick disconnects and you have perhaps the most efficient means of routine periodic partial water changes.
My website and Blog:

(View User Tanks)
PTrader: (2/100%)
Join Date: Feb 2017
Location: Lindenhurst, IL
Posts: 779
The small amount of water that would be stagnant is likely insignificant compared to the tank size. Especially considering that as others have said, the stagnant water will be the first to drain out.

Are you setting this up with DIY pvc overflows then? Something like this?


You Tube
Science, my lad, is made up of mistakes, but they are mistakes which it is useful to make, because they lead little by little to the truth. -Jules Verne
Bunsen Honeydew is offline
Quote Quick Reply
post #5 of 9 (permalink) Old 08-01-2020, 01:43 PM Thread Starter
lk7630
Algae Grower 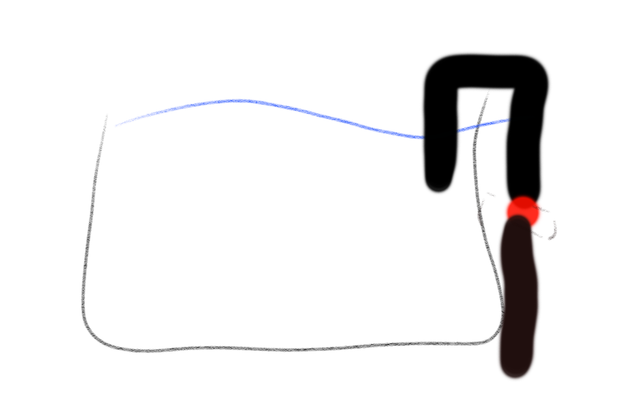 I want something simple like this. The red dot is the ball valve. There is always water from the end in the tank to the ball valve.
lk7630 is offline
Quote Quick Reply
post #6 of 9 (permalink) Old 08-01-2020, 04:10 PM
Bunsen Honeydew
Planted Tank Enthusiast

I want something simple like this. The red dot is the ball valve. There is always water from the end in the tank to the ball valve.
Something like that is going to need to be reprimed every time that you use it. If you build it like the one in the video without the bigger pipe in the tank (put a sponge or screen over the end) with the T on the back higher than the opening in the tank it would work the way you want.

Sent from my Pixel 3 XL using Tapatalk
Science, my lad, is made up of mistakes, but they are mistakes which it is useful to make, because they lead little by little to the truth. -Jules Verne
Bunsen Honeydew is offline
Quote Quick Reply
post #7 of 9 (permalink) Old 08-01-2020, 05:47 PM
PlantedRich
Planted Tank Guru

(View User Tanks)
PTrader: (2/100%)
Join Date: Jul 2010
Location: United States
Posts: 12,275
I see nothing wrong with the plan, assuming you do keep some basics in mind. One is that the tank end of the pipe has to always be in the water so that the siphon is not lost when the tank drains down and two, the ball valve has to be low enough to make the water amount on the outside exceed the amount you need to move up and over the rim. In moving and over the rim to start down. other words make sure the water going down the outside is enough to get the water going up. Also be aware that things like bubbles going up into the pipe will tend to gradually kill the siphon so keep it away from any bubbles, etc.
For a low effort operation, I once had six tanks with a combined drain of this sort but used a solenoid on a timer at the drain in another basement room to open and start flow. Then I had a barrel of reserve water which I treated and let a timer pump it back into the tanks.
One could say changing more water and letting it drive the overflow would do the same except that would also mean part of the new water was draining out, so I opted for the more complex setup.
I was working massive hours at the time and doing water changes seemed a good idea but it also had problems of various sorts losing siphon and overflowing the tanks. I eventually decided I needed more personal time to actually see what the fish were doing more than I needed the cut in time.
PlantedRich is offline
Quote Quick Reply
post #8 of 9 (permalink) Old 08-15-2020, 02:10 PM Thread Starter
lk7630
Algae Grower


(View User Tanks)
PTrader: (0/0%)
Join Date: May 2019
Posts: 24
Thank you. I am actually planning to do just like the video but the tall pipe where he poured the water in I'll connect it directly to the water pipe, regulating by a ball valve so if it ever loosea pressure I can always fill the pipes again. In such case the stagnant water from the end of the pipe in the tank to the water surface (the small amount inside the pipe) will get pushed into the tank. Would it be any issue?
lk7630 is offline
Quote Quick Reply
post #9 of 9 (permalink) Old 08-15-2020, 02:35 PM
PlantedRich
Planted Tank Guru

(View User Tanks)
PTrader: (2/100%)
Join Date: Jul 2010
Location: United States
Posts: 12,275
I'm guessing it will not be a real factor as water changes density as it cools or warms, so any isolated water in a pipe will tend to be a different temp than the rest of the tank and that makes it move. Think of the way the Atlantic moves warm water up the East coast of US, cools and comes back down the West side of Europe? Maybe not a lot of movement in your pipe but you are not talking about a lot of water either, so a bit is likely to be good enough. There will also be a certain amount of stirring due to the moving water in the other parts of the pipe.
PlantedRich is offline
Quote Quick Reply