So after testing my water parameters, I can see that things are not quite where I want them to be. I also have some other problems I'm unsure what to do about! So let me first provide the basic information.

So as I now know from reading, this is NOT GREAT. The shrimp are a question mark because I put about 13 in, but I don't usually see many. When I do see them, they look good, and I haven't found any deaths, but who knows if they are being cannibalized or anything like that... There are lots of places for them to hide to be fair. The snail hitched a ride in on a plant-- I know some people consider them pests, but I've also read they're good for the ecosystem so I've left it in for now. The betta is doing mostly pretty good. He's active, eats well (but not too much) and has even built a bubble nest. But, he has some white fuzz on one eye. I have dosed the tank with 5 ml of pimafix and 5ml of melafix (other meds I'm concerned will hurt the shrimp and/or plants). It has only been a day of the meds, so it's too soon to know if they're helping. The CPDs are perfect as far as I can tell. They swim around in their group, are active, eat voraciously, and have no visible problems. Concerning aggression: I have not seen the betta bother anyone unless they get too close to his nest. He will scare them off but does not give chase. The tank is heavily planted, and any plants that weren't doing well got removed.

My driftwood is DISGUSTING. It's covered in white fuzz. I've washed this thing so many times but it just comes back... I read that it's mostly harmless, but it seems to make the water pretty cloudy. The shrimp can be seen eating it, but they've hardly made a dent.

So, I've already messed up by jumping the gun on stocking this tank... but I'd like to do what I can to get the inhabitants through this. What can I do to improve their conditions? Would wondershell help raise the GH and KH for the inverts shells? Could that hurt the fish? Should I do lots of water changes until the ammonia and nitrite are down to 0 or proceed as normal? I have been doing weekly 30% water changes so far. How do I get rid of the nasty white stuff on the wood, or should I just leave it alone?

Any advice would be greatly appreciated. I'm new to this and I'm trying to do it right, but I definitely need practice. 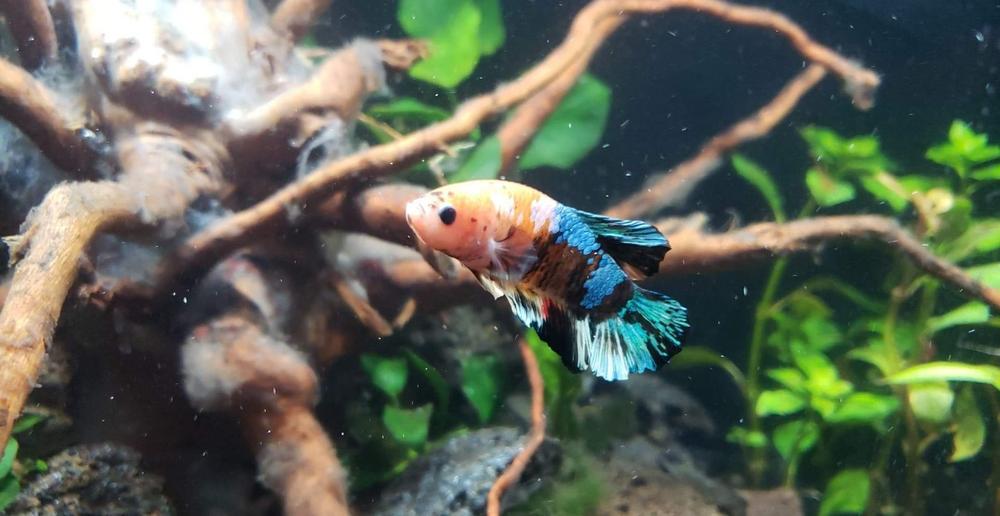 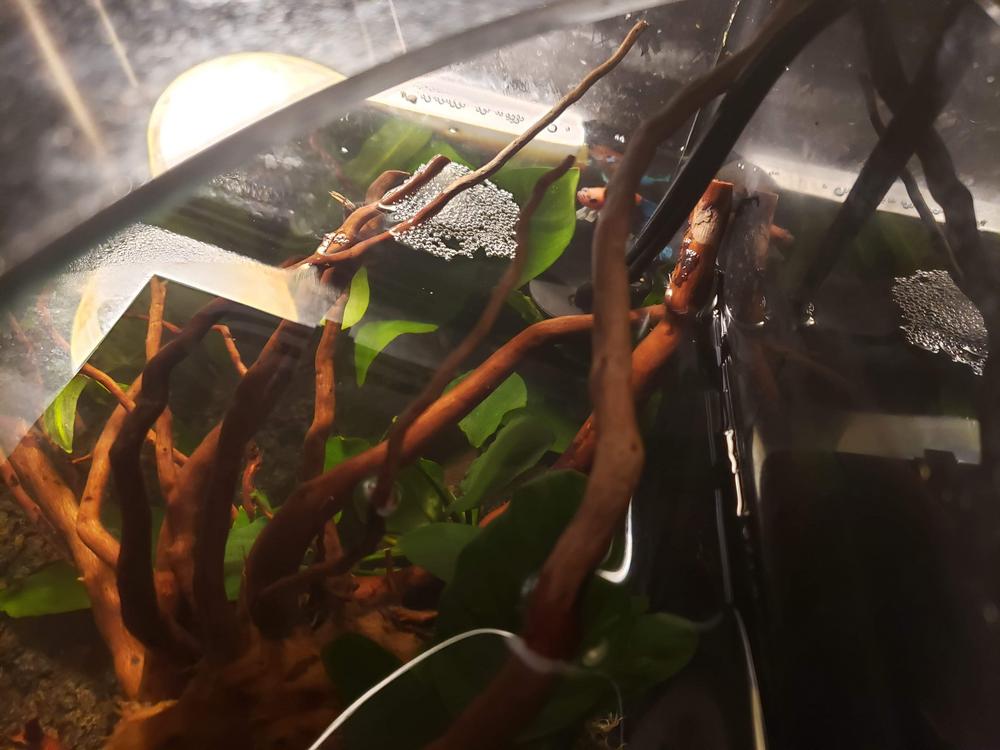 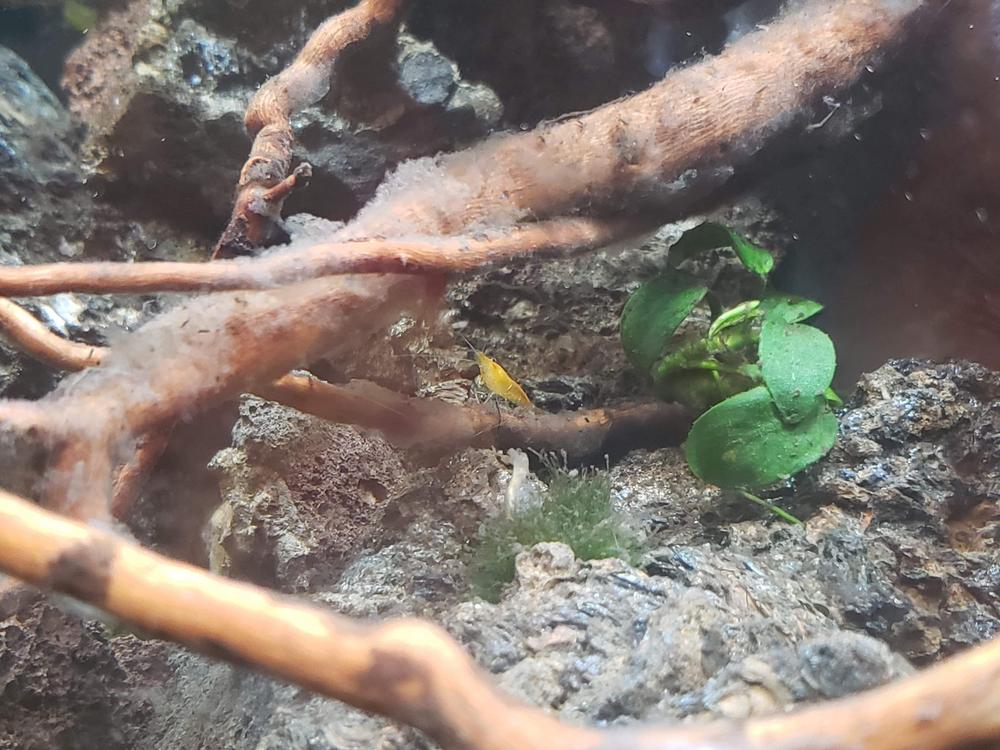 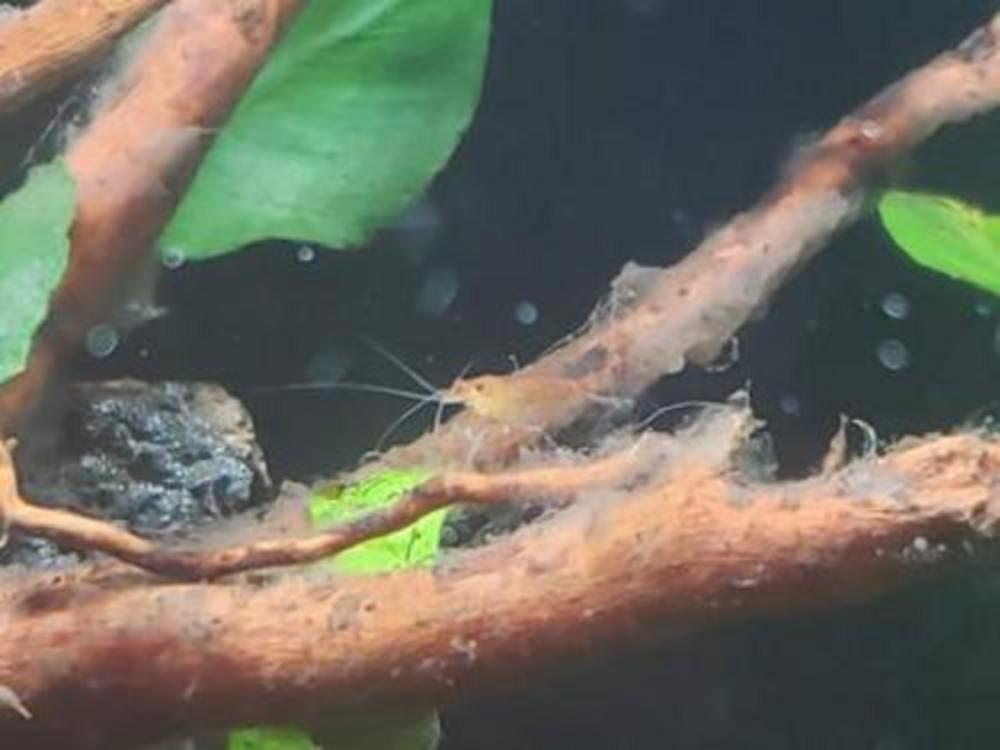 
(View User Tanks)
PTrader: (0/0%)
Join Date: Jan 2019
Posts: 45
The fuzz on the driftwood is harmless in my experience. Unattractive but harmless.

I don't know about the GH and KH for the invert shells. However, I would really try not to raise the pH while you have nonzero ammonia concentrations in the tank (more on this in a bit). Raising KH would raise pH I think, but I don't think raising GH would. Generally I think you want low KH and moderate GH in the planted aquarium. I'm definitely not a pro at raising aquarium plants and I've never kept shrimp.

At low pH, ammonia loses its toxicity (see here). At your pH, basically all that ammonia is in the form of ammonium, which is harmless to fish.

The nitrite is bad for fish irregardless of the pH (I think). Your nitrite levels don't seem super high. However, it's still not great for the fish and this could be why you may be seeing a fungal infection on your betta's eye (assuming thats what it is). I would do a water change to lower the nitrite level. Then I would keep testing and changing the water keeping the wastes low. I think a low level of nitrite would be tolerable for the fish.

On the other hand, maybe you need to let it be for the cycle to finish? You at least don't have to worry about the ammonia too much. Someone else should comment about the toxicity of nitrite.
zdrc is offline
Quote Quick Reply
post #3 of 6 (permalink) Old 01-23-2020, 12:50 PM
minorhero
Wannabe Guru

And yes you definitely jumped the gun stocking the stank if you see any ammonia or nitrite its not time to stock the tank. All that said, now you have the fish so lets go through what you need to do to keep them alive.

Since you have added meds you should follow the directions on the meds for dosing and water change.

Once that has run its course you should start doing a 50% water change at least once a week and more if you still have ammonia readings.

Your driftwood is fine. Its very normal for the white fungal stuff to show up and it will go away within a few weeks. Stop taking it out and washing it as this will if anything prolong the existence of the fungal stuff.

Your base water parameters (minus the ammonia and nitrite) are actually pretty good and you really shouldn't do anything to them. I'm not sure what you are reading that makes you think they are bad. A lot of folk would do a lot to get your tap water.

Another issue is temperature. Your currently at 76. I am assuming you have a heater in this tank? If so, you need to turn it up. If its a pre-set heater that doesn't turn up, then you need to move it so that it is in a better location where it can warm the water more effectively. If you do not have a heater... well go get one right now. Bettas need temperatures of 78-82 degrees. If they are much lower then that they will be prone to infections and other health problems.
To view links or images in signatures your post count must be 10 or greater. You currently have 0 posts.


To view links or images in signatures your post count must be 10 or greater. You currently have 0 posts.
minorhero is online now
Quote Quick Reply
post #4 of 6 (permalink) Old 01-23-2020, 01:59 PM
ustabefast
Planted Member

I don't know that pimafix and melafix do much good, but the frequent water changes are essential until your tank is cycled.
ustabefast is offline
Quote Quick Reply
post #5 of 6 (permalink) Old 01-23-2020, 07:01 PM
zdrc
Algae Grower

Sorry for taking so long to respond. Thanks for all the advice. I had a heater in there but it was pretty cheap and non-adjustable, so I just replaced it with a better, adjustable one (since our house can get cold). The temp has stabilized and the betta seems happy. The white stuff on his eye is going away, I'm not sure if it's the med or the temperature change, but either way I'm pleased! Ammonia and nitrites have gone down quite a bit. I think the tank was partially cycled, and there was a spike due to adding too much stock at once. It seems to be stabilizing and the plants are exploding with growth. Overall I'd say I'm optimistic for how this tank will do! I may still consider supplementing some calcium in the water for the inverts, but I'll wait until I don't see any more ammonia before doing that, as it could raise the PH.

I am thinking about adding a few nerite snails-- will this affect anything? I will of course wait for the water to fully stabilize before adding anything else. The snails will probably be the last additions to this tank as I am fairly new at this and want to stay far, far away from overstocking. I was considering ottos at one point but I don't think there's enough room for enough ottos to keep them happy. Maybe for a future tank, because they're so adorable.
austar is offline
Quote Quick Reply