(View User Tanks)
PTrader: (0/0%)
Join Date: Aug 2019
Location: Maryland
Posts: 142
I was experimenting with my tank the past two weeks due to algae and nutrient issues (first noticed yellowing of old growth, brown spots on one leaf, new leaves fine). The deficiency issue started out a yellowing, but this plant is different, dark veins and darker in general and the same appears to be spreading to other s. repens. These two pictures were taken 2 weeks apart. I'm unsure what to do about it. my Ca in tap is 21.1 and Mg is 6.09. I've been dosing flourish comprehensive once a week as recommended and in the past week+ have been dosing iron and potassium and the plant has only gotten worse. I can only think i'm deficient in Magnesium or phosphate, which I ordered and now have but have not used. (I have not used it because after a large growth spurt from increasing liquid co2 and dosing flourish comp. iron and potassium the last two weeks I got GDA on the walls and don't want to give it more to munch on, but i do want to treat the deficiency at the same time). And I've heard a PO4 deficiency can cause GDA.

While other plants aren't showing it as severely as this one is here they are beginning to show the same dark veins and dark look, affecting old growth leaves only. Growth has been quick and the deficiency has picked up speed. I need to find out what this is and fast. The past few weeks i've consistently tested 10-20ppm NO3, but 0ppm P04 and I've been dosing the recommended amount of potassium to raise ppm to about 20, and dosing Iron as recommended, and flourish comprehensive as recommended and actually dosed it twice three days ago after water change hoping that the missing nutrient could be picked up by that extra dose. To no avail though the plant looks worse.

I gotta find out what this missing nutrient is or cut the lights and co2 to stunt growth and the moving around of watever mobile nutrient is missing. NPK or Mg I believe. 6.09ppm is in my tap, not sure if that's enough, I heard ideal is 10ppm but I guess it depends on growth speeds and plant mass? From the 6 or 7 times i've tested NO3 the last 2 weeks i've had 10-20ppm and the last 7 days have been dosing potassium (.25ml per day 2.5 gallon tank). So if I'm understanding things correctly this could be pointing me towards phosphate deficiency as that seems to be the only one i'm missing (never tested above 0ppm last two weeks).

I get a lot of confusing signs and symptoms and different pictures with deficiencies. Any help would be appreciated. I just started taking planted tanks seriously a month or so ago.

Bump: 8/06/19 (zoomed out) showing leaves in better health than images below 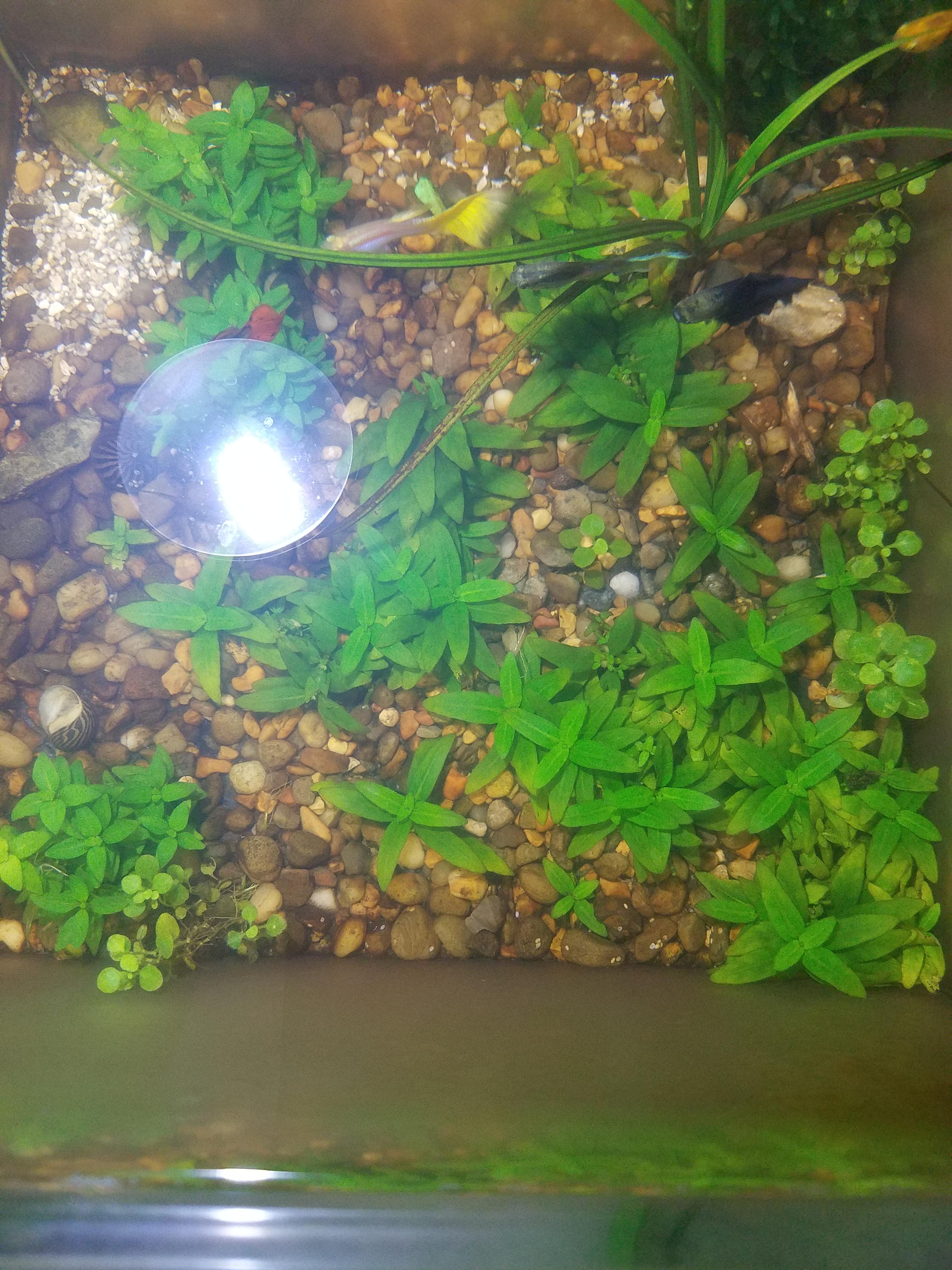 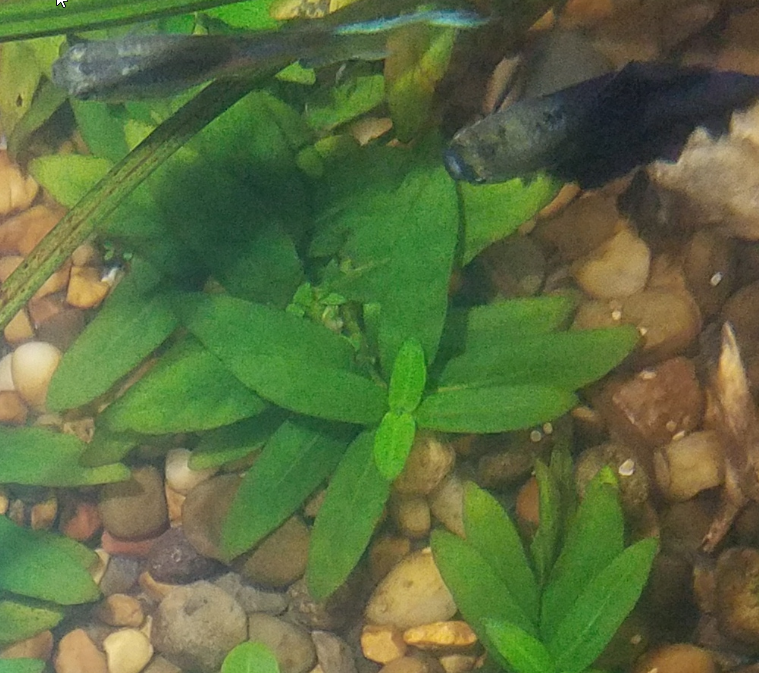 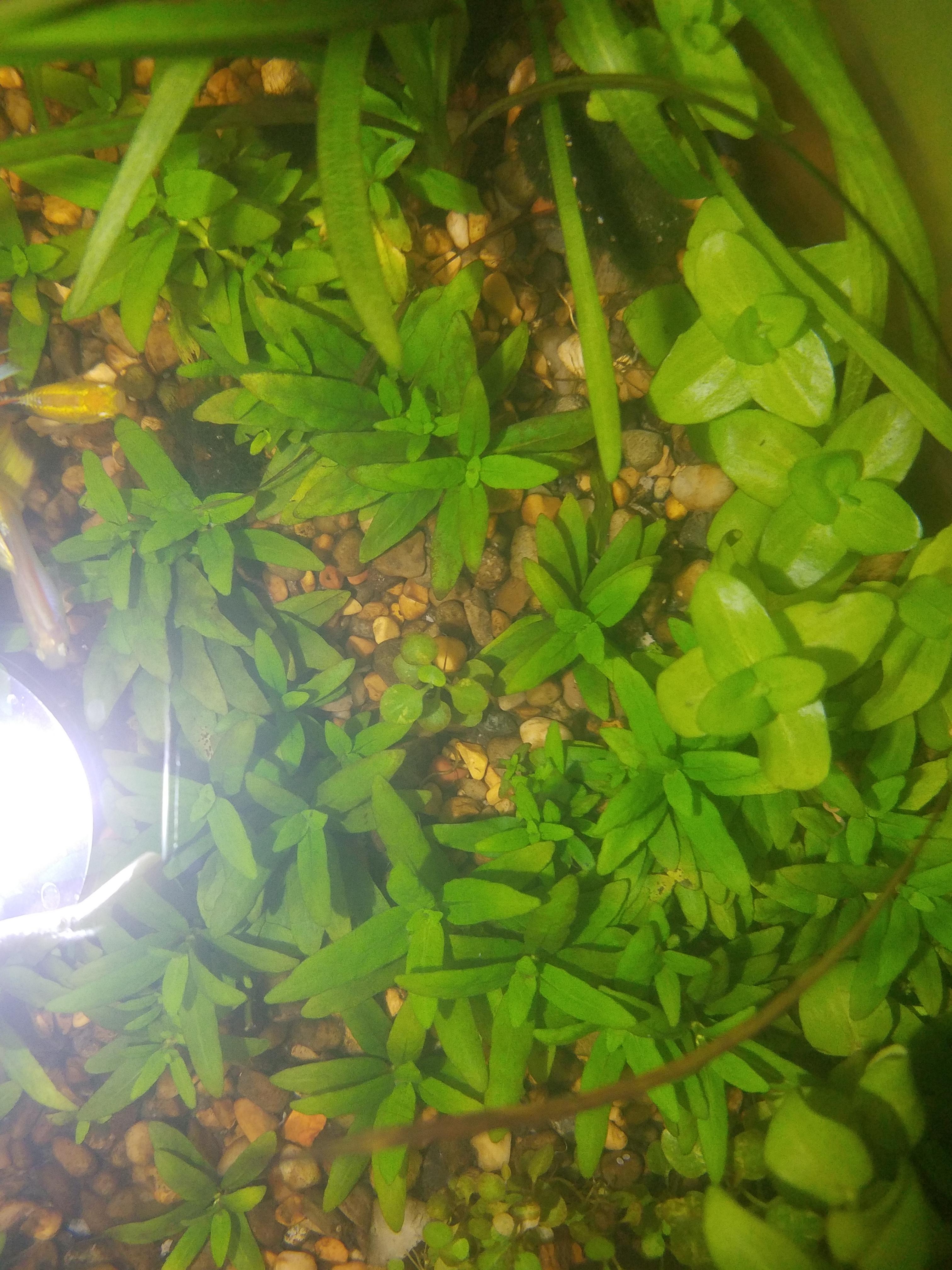 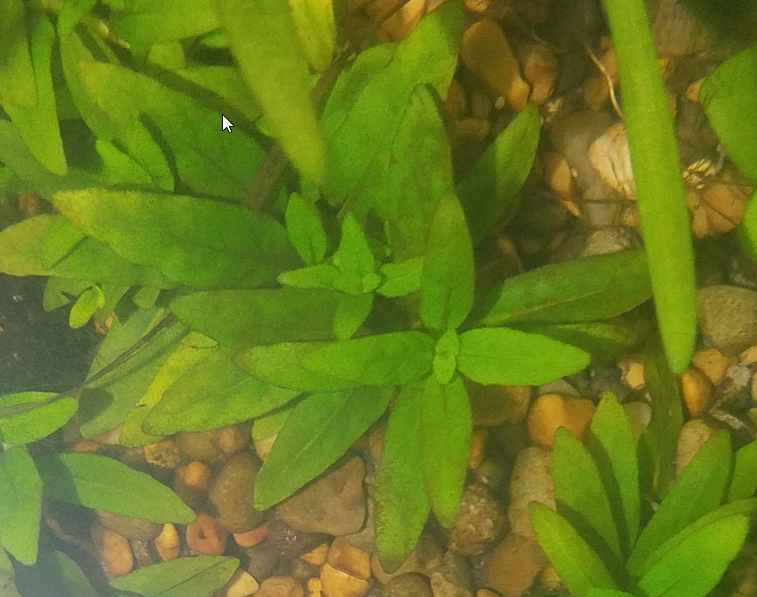 I have a nutrient dosing plan I created that I think is ok. And I have on hand: Flourish Nitrogen, phosphorus, Iron, Comprehensive, and Potassium. Along with API CO2 booster.

What I'm struggling with right now is two fold, solving the nutrient deficiency while resolving my GDA problem that has gotten worse day by day.

I did solve the GDA 3 weeks ago when I decided to do something about it. With 6hrs light (half), no dosing, no liquid co2, algae didn't return after cleaning it. Then after believing I had solved the issue, increased light to 7 hrs. .2ml of liquid CO2, .2ml flourish comp once a week, .1ml (.07ppm) Iron once a day, .25ml (1.59ppm) K once a day. GDA was ok first few days, guess it had to build up to be visible but it's definitely back, even more so I'd say. Before I did something about it I wasn't dosing anything not even CO2.

I just don't know the more I think about it the more confused I get about how to approach it. I already decided to reduce light back to 6 hrs. I don't think i'll reduce co2 since a lot of people usually talk about increasing it to combat algae. Which leaves dosing......I just don't know, if I don't dose my plants, at the rate the deficiency is going, could die in a week or two. I could dose minimally and give it a week and monitor plant health and algae and go from there perhaps.
Last edited by Darkblade48; 08-21-2019 at 02:56 AM. Reason: Please use the edit function for back to back posts to keep threads cleaner
nothreat33 is offline
Quote Quick Reply
post #2 of 9 (permalink) Old 08-21-2019, 05:30 AM
DaveKS
Wannabe Guru

(View User Tanks)
PTrader: (0/0%)
Join Date: Aug 2019
Location: Maryland
Posts: 142
Quote:
You’d be better to take that .2ml of fluorish and add it to 700ml of ro/distilled water and dose 100ml daily to top of for evaporation instead of the once a week feast or famine dosing your doing now.
That is a great idea! I knew dosing a lot at one time of something was something I wanted to avoid. I knew I had to spread my nutrients as evenly through out the week as I could. I did this when figuring out my first dose testing regiment with rotala's nutrient and accumulation calculator but neglected flourish comp. It slipped my mind. Even when I spread my other doses out there's still a steep incline of ppm (through the ideal ranges) through out the week when dosing drops per day, just unavoidable with a small tank and concentrated ferts...unless I want to dose multiple times a day.

Before the double dose of flourish algae was increasing (still was dosing it though). Is that what you believe is the main culprit of the algae? Or perhaps lack of PO4 which also might be the deficient nutrient?

I want to correct what's wrong with the plants but have to do it extremely carefully due to current algae and small tank size. Any suggestions on how to proceed?
Mike

I think the deficiency is magnesium or phosphate.
Mike

(View User Tanks)
PTrader: (0/0%)
Join Date: Aug 2019
Location: Maryland
Posts: 142
Quote:
Originally Posted by DaveKS View Post
I tried to get you to answer this in another thread. We are talking about a low tech, non-co2 injected 2.5gal tank here right?
I found the post you are talking about, I think. To answer your question, yes, but I don't have the 5 gallon yet. I'm doing my research to start it right while trying to fix the algae and nutrient issue in my 2.5g. Both became much more an issue when I decided to propagate my s. repens and make a carpet. I see the thread you're speaking of. I did get a phosphate test kit on the 14th. I've tested every other day since and it's always at 0ppm.

Knowing that I do have some Mg in my water, but 0ppm PO4 consistently....I'm thinking my approach should be something like this:

-(I reduced light to 6hrs yesterday)
-Hold off on dosing flourish comprehensive until I find a way to dilute it the way you suggested. The deficient nutrient surely isn't in this, as the signs have only gotten worse since dosing (but plants grew, which is why deficiency accelerated). So I'm not losing too much cutting this out of the equation.
-Monitor NO3 to ensure I have that available to the plants. I'm looking into a more precise NO3 test kit. (using crappy API)
-Dose what I have been of potassium as i'm not showing any signs of deficiency there, and from what I've heard you can have a good amount of it in a tank without it causing algae or problems. aim for 15-20ppm
-Reduce Liquid carbon dosing, to reduce plant growth which is sapping the deficient mobile nutrient from older leaves making them worsen quicker. Reducing carbon dosing might yield faster and more noticeable recovery of mobile nutrient.

edit: I just realized something... I was so preoccupied with needing all my plants to be growing (and therefore needing all nutrients) I didn't think maybe to halt growing and dosing other nutrients because of course, you don't need all nutrients present to find the deficient one. You need all nutrients to grow, sure, but I can just dose PO4 and because it's a mobile nutrient I'll see the leaves effected by the deficiency start to improve. The plant might not grow much, but if that's the limiting nutrient the leaves should show improvement.


(View User Tanks)
PTrader: (0/0%)
Join Date: Feb 2017
Location: PA
Posts: 1,713
I think you are on the right track regarding PO4. There are many deficiency/toxicity charts, but one I like (they address hydroponics) that has much more depth than most can be found here: https://www.advancednutrients.com/ar...ient-problems/.
Deanna is offline
Quote Quick Reply