(View User Tanks)
PTrader: (2/100%)
Join Date: Jul 2011
Location: Madison Heights, Michigan
Posts: 3,159
Opinion on stand?
I picked up this stand today from a LFS that was used that looked really nice for a steal that was only 50 bucks. It also came with a matching canopy. It's stand for a 55/40/33 long tank. Really glad I found it considering for a stand this nice made out of real wood and not particle board around here costs 200+ dollars. I'm hoping to use it either for a 40 or 33 long.

The only issue I'm having with it is the front corner is slightly separated. It's not loose or anything like that though. It doesn't wiggle or anything and is still pretty tight. See the last picture attached. Is this a cause for concern? Can I just glue it with gorilla glue or something like that? I personally wouldn't think it would be too big of a deal, but not entirely sure... 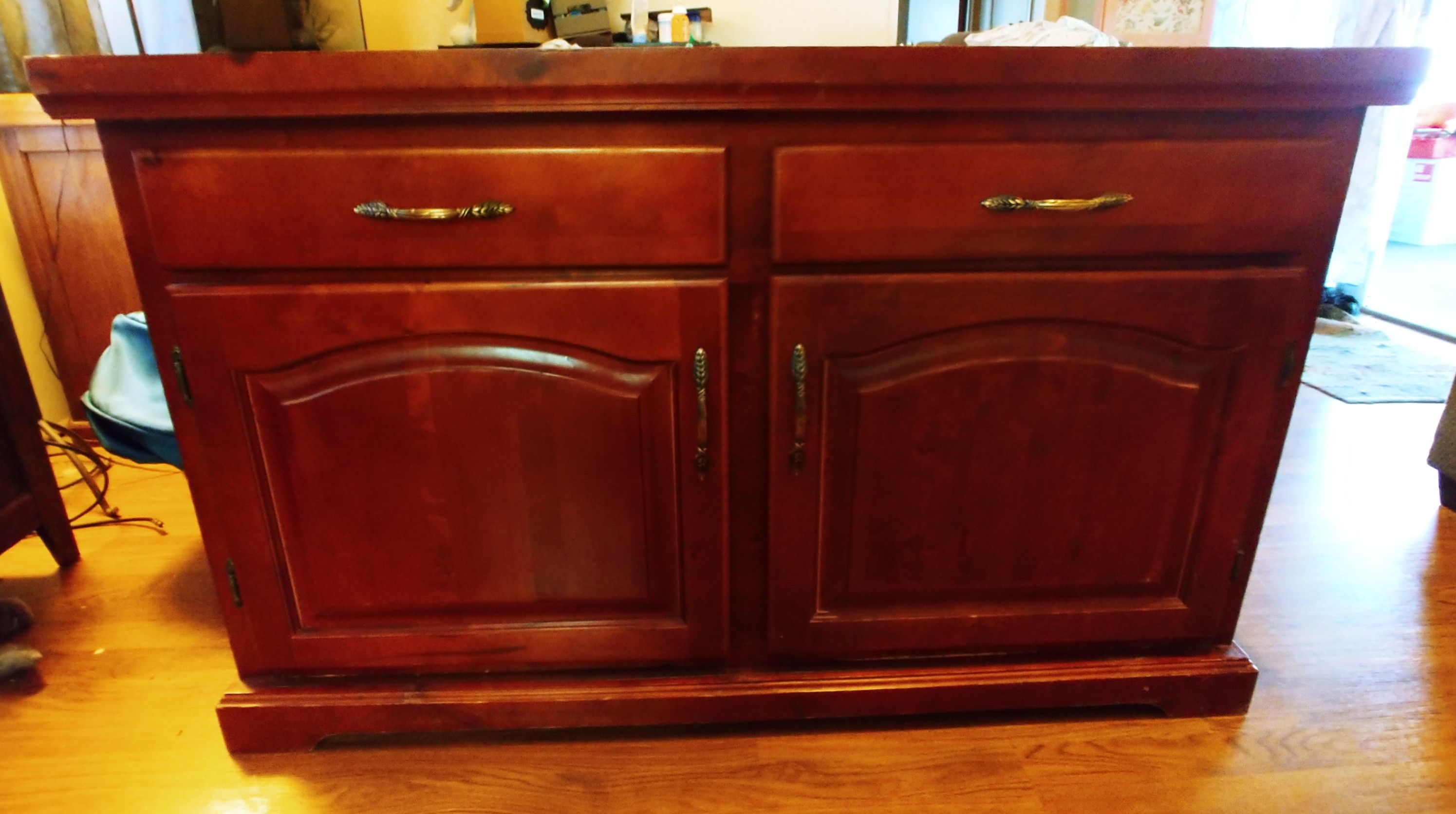 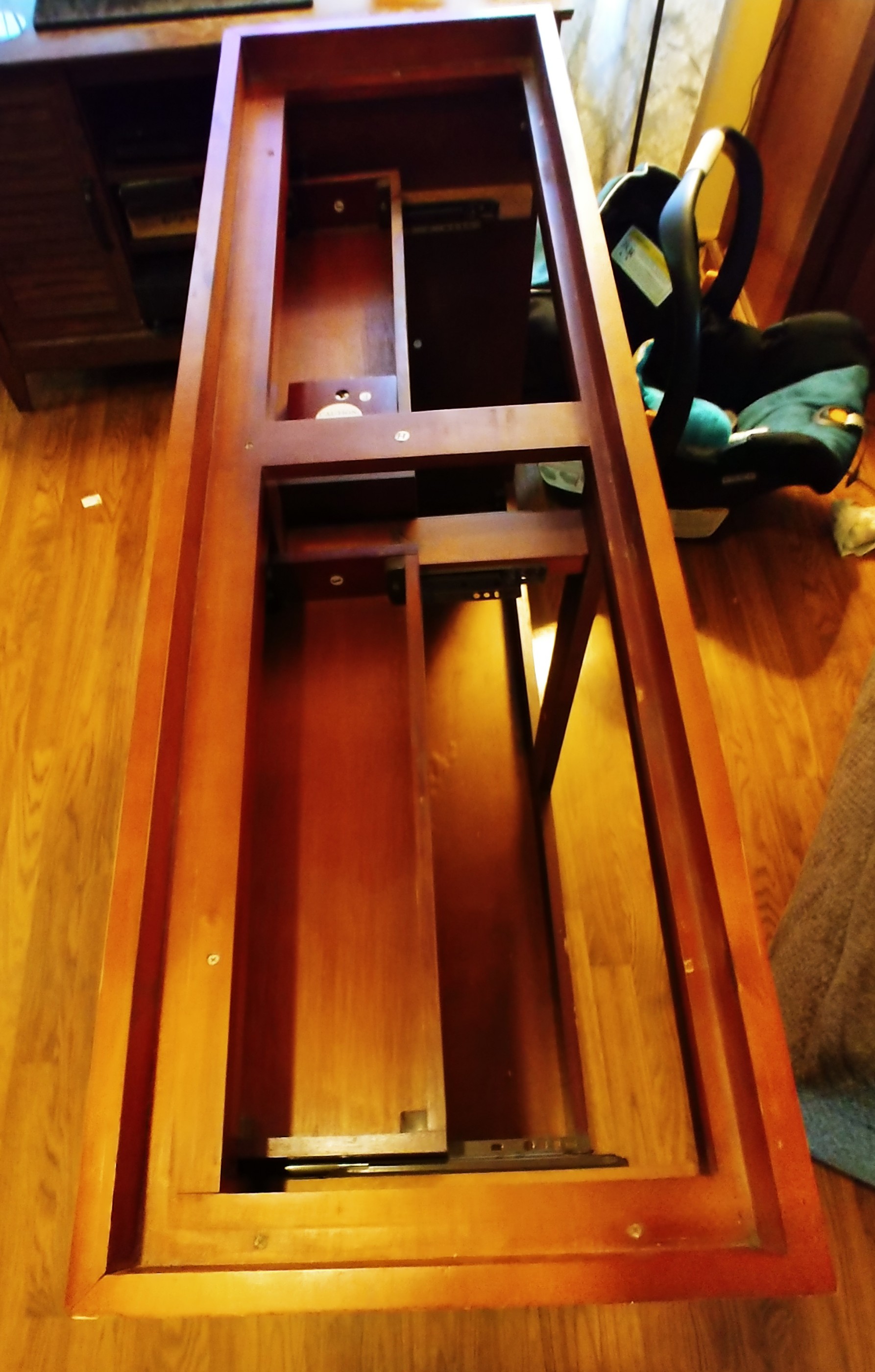 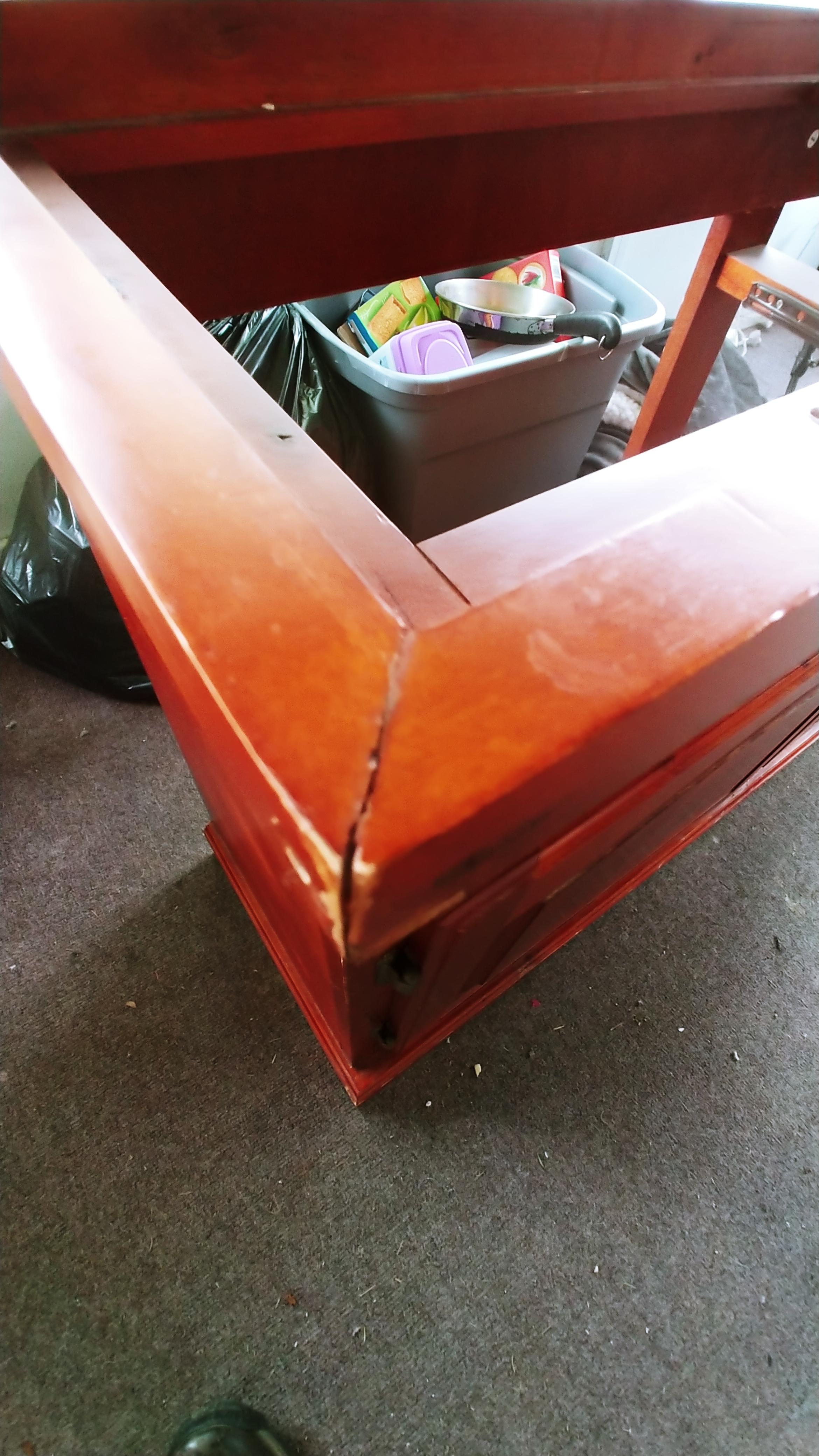 
(View User Tanks)
PTrader: (0/0%)
Join Date: Mar 2019
Location: PNW
Posts: 970
Not sure if I would personally use it however if I was it would be wood glue in the crack and a couple of screws at a angle to pull it together. I just get leery of things that are starting to separate like that. If it seems sound however may be worth a shot. Wipe the glue off that comes out while its still wet.

I have a couch that this happened to and I did the above method which has held for the past year.

Ofcourse its always hard to recommend a fix for something like this when you have 500lbs + sitting on it.
Quint is offline
Quote Quick Reply
post #3 of 7 (permalink) Old 05-21-2019, 03:17 AM
Newbie Tankard
Planted Member

(View User Tanks)
PTrader: (2/100%)
Join Date: Dec 2018
Posts: 171
I don't believe given the pictures that the piece you are worried about is supporting any weight. The tank sits inside the lip correct? If so that piece there is essentially trim, cosmetic and you can fix however looks good for you.
Caution with screws however, if that's actual wood you may want to predrill holes since near the end you could just split it and make yourself more problems.
Newbie Tankard is offline
Quote Quick Reply
post #4 of 7 (permalink) Old 05-21-2019, 09:24 AM Thread Starter
Blackheart
Planted Tank Guru

(View User Tanks)
PTrader: (0/0%)
Join Date: Mar 2016
Location: Perth, Australia
Posts: 87
My trim has separated a bit from last move - bit leery as wondering what else happened but tank has been solid as a rock for several months (touch wood

(View User Tanks)
PTrader: (2/100%)
Join Date: Jul 2010
Location: United States
Posts: 12,314
Not a big worry but this is a common problem with commercial stands that use this design, so I move on to how to fix it and wind up looking good. Rather than screws which are then a problem to hide, I would go with common wood glue like Elmer's which is made specifically to soak into the wood fibers and set up, making the joint almost like a solid piece.
To do this, I suggest buying a couple lightweight but handy tools, if not on hand. First is a saw to remove enough of the existing glue to let new glue go down in the crack. Once glue is in the crack as well as possible, I would then use a couple items called pipe clamps. These are simple sets of "jaws made to screw onto pipes to make a super long clamp.
Something like this is good enough if for one time use but there are lots of various options on which is best:
https://www.harborfreight.com/2-piec...BoCkJIQAvD_BwE
Then with glue in the joint, use the two sets of clamps to go front to back as well as side to side and pull the joint totally close to set up solid. This will likely squeeze some of the glue out but one of the nice things about elmer's is that it cleans up with water. Easier before it dries but still okay after it sets. Use a matching marker, putty stick or crayon to hide the new joint?
With a bit of work, it looks like a good find!!
evil8 likes this.
PlantedRich is online now
Quote Quick Reply
post #7 of 7 (permalink) Old 05-22-2019, 08:45 PM
KayakJimW
Wannabe Guru

(View User Tanks)
PTrader: (8/100%)
Join Date: Aug 2016
Location: Richmond VA
Posts: 1,424
I have that Identical stand! Actually matching 29 and 90 gallon stand/ canopy combos and I love them. No joke I've had them since the late 1990's and they aren't going anywhere. They are by Marineland but I forgot what that exact series was called. As stated above, what has separated is not structural so you're all good. The stand is assembled by Cam Locks so since it's second hand I would go around and make sure they are all tight. If you're not familiar with cam locks they use a phillips head screwdriver and lock a post from the adjacent piece they're closest to, so you give a quarter turn clockwise and see that it's snug, that's all. Not to be a downer but they aren't solid wood. It's a veneer over MDF (or similar). I found out when I drilled into it for light hangers. That being said I've had an open top 20 gallon sump under my 90 for 20 years and have zero signs of moisture damage. It's nice furniture, just not solid wood but I wouldn't have known without drilling it. $50 is a steal for that! Did the canopy come with the tinted glass tops? or just open rectangles up there?
92% of all statistics are made up on the spot.
KayakJimW is offline
Quote Quick Reply