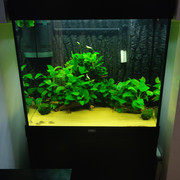 Aquarium cohabitants: 6 sterbay corrydoras, 2 ottocinslus, a couple of amano shrimps as well as 2 or 3 RCS, 2 neritines and a some pesky snails that came with the plants(these are on borrowed time as I will bring some Assasin snails to get rid of them but first I want to sort out my issue).
This is what left after an amonia posining and PH crash due to adding to many fish at the same time

- stupid me.
Initially there were 10 sterbay,10 black venezuela corry, 6 ottocinslus and a little bit more shrimps.
Now I have a seneye in my aquarium and I keep everything under control.

Very fine sand on the bottom and a lot of Anubias on some bog wood.
Feeding once a day either: Omega One. Shrimp Pellets , King British Catfish Pellets complemented with 1/4 of King British Algae Wafer every 2 or 3 feedings- this is for the otto.
Maybe once a week some frozen blood-worms.

Water:
I am doing weekly water changes around 20-25L with full RO water remineralised with Sachem Equilibrium and buffered with Sachem Alkaline and Acid Buffers(3:2 ratio).
In this way I keep my PH very close to neutral, but still having some buffer capabilities.
TDS of this water is around 180-200ppm from which half is from the buffers and the other from minerals.
When I do my water change I am adding an almond leaf into the aquarium and I am removing one that was added 3 weeks ago,
so I always have 2 leaves in my aquarium mostly for the blackwatter effect, food for the shrimps/otto and the tannin. 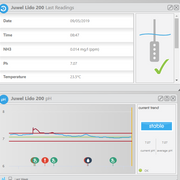 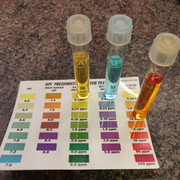 On the seneye screenshot the PH raise was false reading because I've just changed the probe and it wasn't fully calibrated yet.

I know that it sounds silly but my problem is that I can't get my water free of small particles and please let me tell you what I've tried.

My Fluval 406 setup is -> Prefilter coarse sponges original ones. From bottom to top the trays are filled with:
1st -> medium sponge original one,
2nd -> bottom half JBL Symec Filterwool with Siporox ceramic rings (I had this from my previous aquarium to have some of the beneficial bacteria to speed up the cycle)
3rd -> Sachem Matrix.
4th -> Sachem Matrix
Juwel internal filter -> I had this stetted up with the
top part with Sponges(coarse/medium/filterwool in various order because of the fluval BioFlow bypass design)
bottom part some bags of Sachem Matrix. At some point I have also used some JBL SymecMicro inside this but without too much success.

With this setup I could see a lot of small particles floating in my aquarium as well as on the surface.
I've tried to change the flow of the Juwel filter to point in different directions.

I've set the Fluval outlet using a spray bar or without pointing into different positions.
Initially I used Fluval original intake with the Eheim External Prefilter but I had like a small dust floating so I've replaced it with JBL Top Clean 2 and got rid of that dust.
I used the Top Clean with and without height extension.

Whatever I did my water was still having small particles or debris floating around.


After all of these strategies I've decided last weekend to do some serious changes(I was thinking that 2 different flows might cancel each other):

I've removed the Juwel powerhead (not the whole filter just the powerhead) and put the Fluval outlet there ( the white one that came with the filter) and removed the spray bar from the aquarium.
I've removed the JBL Top Clean and switched to Fluval original intake inside the Juwel internal filter and used all the Juwel sponges just like a prefilter in this order: coarse,medium and filterwool.


The attached picture represents this new setup, with the mention that the sponges order is : coarse,medium and filterwool. With this setup my surface was full of dust so this is why I've added the Eheim surface skimmer.

It made my surface dust free in minutes but I still have the pesky small dust or fish poo or debries floating around.

I had a couple of aquariums in my life and I always had the water crystal clear and never had this issue.
The only difference with this aquarium is that is the biggest one, it's taller and more like a cube and it has fine sand as substrate.

I couldn't get a decent photo with phone so you can see the small particles but I will try to take a better picture with my camera this evening.

Do you have any ideas or advice to get my water crystal clear ?

(View User Tanks)
PTrader: (2/100%)
Join Date: Jul 2010
Location: United States
Posts: 11,987
Perhaps just jumping at things but is it possible the cories are doing more stirring than expected or what you are used to seeing? Would seem the filtering is good enough but if they are constantly working like little beagle pups, maybe they are constantly adding to the small bits floating? Perhaps watch to see if they are leaving a trail as they go around?
PlantedRich is offline
Quote Quick Reply
post #3 of 8 (permalink) Old 05-11-2019, 04:33 PM
mrjbacon
Planted Member

(View User Tanks)
PTrader: (1/100%)
Join Date: Jul 2003
Location: Rock Hill, SC
Posts: 1,657
If you want truly crystal clear water you'll need to use a product like Purigen to remove dissolved organics from the water and/or using a diatomaceous earth filter for super-fine suspended solids in addition to keeping your filter clean. If that's too much for your desires, keep up with filter cleaning to maximize flow and trapping of particulates.
Phil Edwards is offline
Quote Quick Reply
post #5 of 8 (permalink) Old 05-15-2019, 03:28 PM Thread Starter
mariusc
Newbie


(View User Tanks)
PTrader: (0/0%)
Join Date: May 2019
Location: United Kingdom
Posts: 3
@Phil Edwards I don't want to use Purigen because I would like to have my water a little bit brown from the almond leaves and the Purigen will filter the tannin that makes it like that.

@PlantedRich and @mrjbacon Personally I can't believe that 6 little corries cant be handled by that Fluval 406. I am suspecting that the filter might have a bypass.
Another reason that this might not work as expected is that corner box from the Juwel that breaks the flow of the water in a way that the filter doesn't pick up all the particles.

Anyway today I bought an Oase BioMaster 600 which I will set up this week-end (hopefully my 4kg of BioHome Ultimate media will arrive by then) as an addition to the Fluval 406 and see how things are going.
I will keep the 45ppi foams from the prefilter( which I intend to clean every 2 weeks or maybe monthly ) and I will fill the bottom tray will JBL Symec Filterwool and the other 4.5 trays with biological filtration.

They say that there is not such thing as overfiltration in aquariums ? I might hit that level

Later on I will add more fish ( which some of them will be corries) but first I want to make sure I can handle the filtration properly with clear water, tinted a little bit by some almond leaves.

(View User Tanks)
PTrader: (1/100%)
Join Date: Jul 2003
Location: Rock Hill, SC
Posts: 1,657
Quote:
Originally Posted by mariusc View Post
@Phil Edwards I don't want to use Purigen because I would like to have my water a little bit brown from the almond leaves and the Purigen will filter the tannin that makes it like that.
A diatomaceous earth filter looks like your best bet then. It'll remove particles you didn't even know were there and reduce turbidity without affecting the tannins you want. I used on extensively when I participated in competitions and was always amazed at how much clearer the water got when I thought it was already clear.
Phil Edwards is offline
Quote Quick Reply
post #7 of 8 (permalink) Old 05-15-2019, 04:38 PM Thread Starter
mariusc
Newbie


(View User Tanks)
PTrader: (0/0%)
Join Date: May 2019
Location: United Kingdom
Posts: 3
Quote:
Originally Posted by Phil Edwards View Post
A diatomaceous earth filter looks like your best bet then. It'll remove particles you didn't even know were there and reduce turbidity without affecting the tannins you want. I used on extensively when I participated in competitions and was always amazed at how much clearer the water got when I thought it was already clear.
Thanks for the tip but this sounds too complicated and I don't have much space left inside my cabinet and I don't want to add more stuff into aquarium. Hopefully my second external filter will handle this. Fingers crossed.
mariusc is offline
Quote Quick Reply
post #8 of 8 (permalink) Old 05-15-2019, 04:41 PM
Phil Edwards
Wannabe Guru

(View User Tanks)
PTrader: (1/100%)
Join Date: Jul 2003
Location: Rock Hill, SC
Posts: 1,657
Check around, there may be micron media options for the new filter. One filter brand here in the US makes canisters and HOB filters that can take a micron pad that pretty much does the same thing. I hope you're able to achieve your goals somehow!
Phil Edwards is offline
Quote Quick Reply