(View User Tanks)
PTrader: (0/0%)
Join Date: Jul 2017
Posts: 77
Alien white fungus
Well I'm guessing this stuff came from my manzanita wood but no clue how to get rid of it or what it is .
The crazy stuff moves around the tank like a snail at night . I kind of like the way it looks but would like to research more about the fungus.
Any help would be great
Thanks 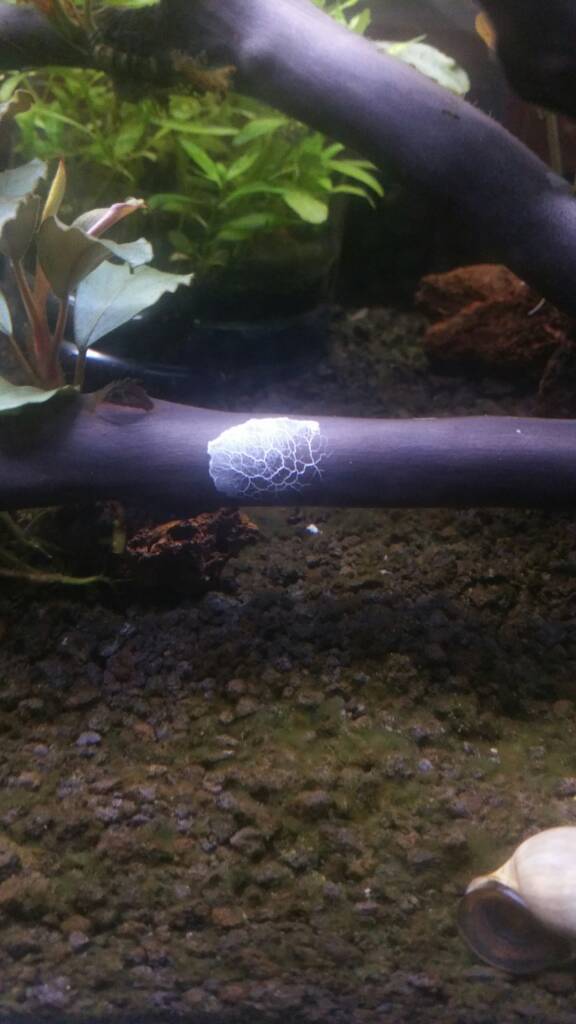 
(View User Tanks)
PTrader: (0/0%)
Join Date: Aug 2018
Posts: 12
I had similar stuff in my black water betta tank back in August, I removed the wood and scrubbed it off but it came back within a week.

It now seems to come and go every now and then, I kind of like the way it looks and it doesnt seem to be doing any harm so I just tend to leave it.

I would still be interested to know what it actually is though. 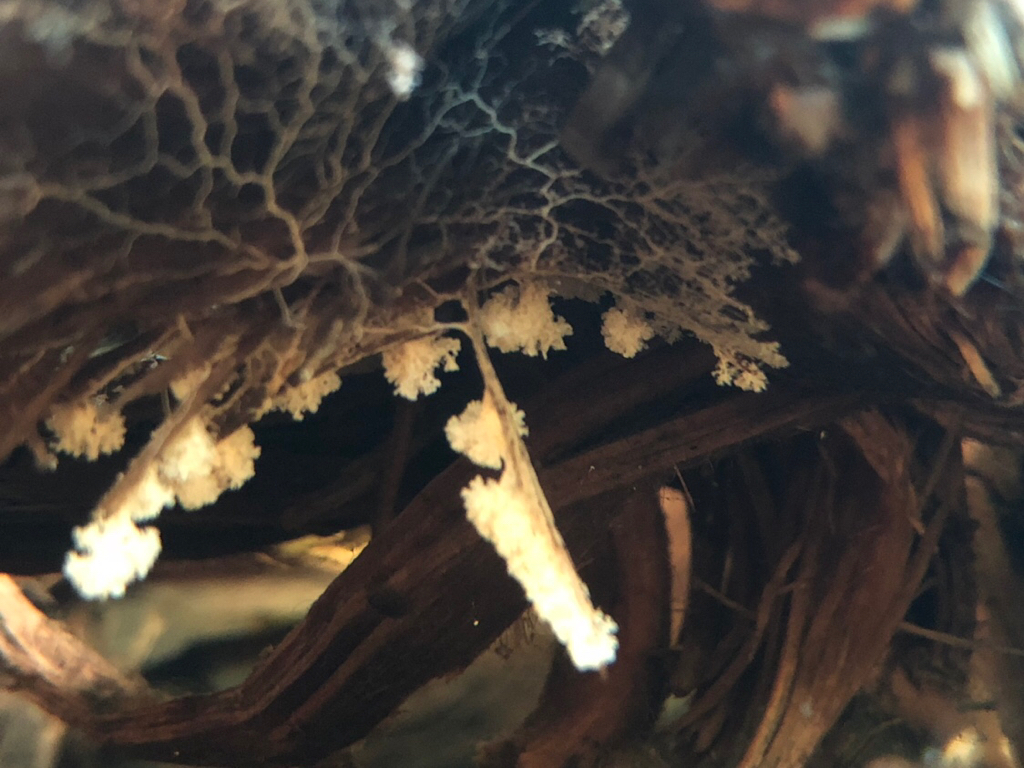 
(View User Tanks)
PTrader: (1/100%)
Join Date: Sep 2008
Location: Palm Bay
Posts: 536
I had this in one of the tanks I take care of. After quite a bit of research I figured it out to be a type of plasmodial slime mold and that not much at all is known about it to science, just that it is not known to be dangerous.
Snapdragon likes this.
Quesenek is offline
Quote Quick Reply
post #5 of 10 (permalink) Old 04-06-2019, 03:25 PM
PlantedRich
Planted Tank Guru

(View User Tanks)
PTrader: (2/100%)
Join Date: Jul 2010
Location: United States
Posts: 11,987
There are lots of small things that we will never fully understand as they are constantly evolving and changing and I lump a lot of these into general groups of mold/fungus/ slime that are no real problem. I do often find them on wood and one reason that I have found seems to make sense as it does seem to be something that comes with newer wood items rather than after long use. It has been proposed that there are sugars in wood and they serve as a food source for this item until the food runs out. This can be days, weeks, or longer but I have not read of it ever being a problem except when we let it be one. I did not like the appearance at first but found that some of my fish did eat it without harm, so I now no longer fight it. Rather than me working, I have now let my attitude evolve so that it no longer bothers me and I don't need to work to remove it!
Evolve your thinking or use mechanical means like a toothbrush to fight it to remove it until it no longer has a food source? I do find a good long bleach soak that lasts long enough to let the bleach fully penetrate to the center of the wood is one way to avoid it as the chlorine does react with all organics like the sugars in the wood. If it is in the tank, I do not remove it and do that long term soak but simply leave it be. The long term soak to get wood fully soaked is a weeks/months long project that I just don't normally do.
evil8 likes this.
Last edited by PlantedRich; 04-06-2019 at 03:27 PM. Reason: correction
PlantedRich is offline
Quote Quick Reply
post #6 of 10 (permalink) Old 04-06-2019, 03:36 PM Thread Starter
Aku Sakana
Algae Grower

(View User Tanks)
PTrader: (0/0%)
Join Date: Jul 2017
Posts: 77
Thanks for all the help. It seems that it's a fungi from the manzanita. There was a little bark left on when I put the wood in the tank and this aloud the fungi to thrive . I usually let my wood set in a hot tube in the summer but this tank was set up over winter and I put the manzanita in without the HOT bath.
I find it very interesting in behavior and appearance, will let it go in the tank and see what happens.
One crazy thing that it does , when it reaches the end of a branch it will float out in the water with just a small hold on the wood . Weird things in our tanks : )

(View User Tanks)
PTrader: (0/0%)
Join Date: Aug 2018
Location: North West WI
Posts: 162
I've gotten some snotty white stuff with both mapani and manzanita. The first time I pulled out the wood and boiled it a second time only to have the slime reappear. Then as PlantedRich said above some of the fish were eating it so I just don't worry about it any more. My new 45 was starting to form a film at the surface and had a bit of a smell. I added a surface skimmer inflow pipe and it cleared up in 2 days.
To view links or images in signatures your post count must be 10 or greater. You currently have 0 posts.
3 planted nano community fish tanks.
evil8 is offline
Quote Quick Reply
post #8 of 10 (permalink) Old 04-06-2019, 06:18 PM
PlantedRich
Planted Tank Guru

(View User Tanks)
PTrader: (2/100%)
Join Date: Jul 2010
Location: United States
Posts: 11,987
There are very few truly guaranteed safe things in most of what we do and that does always leave some small point that may get to us but much of the time, it does work out okay. Thinking of the things we do know change quickly, like flu virus, I feel it normal to think that many of the small things that we might call fungus will be changing and evolving constantly. That leaves me to go the easy way and not try very hard to ID any one specific item as it is possible it may back next year in a different form!
I've found it just about impossible to keep track of the scientific names of my favorite fish and I'm certain that learning the names of fungus is never going to happen with me.
That would be certain to take ALL the fun out of the game.
I collect and soak wood for tanks in a big barrel out back and there are lots of that unnamed/unknown stuff on some of the wood if I leave it too long. I try not to leave wood soaking much longer than a week as it does tend to get slimy and ugly to work with, even though I try to keep a cup or so of bleach poured in the tank every week. Once all the chlorine in the bleach has reacted with the wood or gassed off, all the little creepies begin to grow again and I can wind up opening a barrel of mosquito larva!
PlantedRich is offline
Quote Quick Reply
post #9 of 10 (permalink) Old 04-07-2019, 09:13 PM
irishspy
Planted Tank Obsessed

(View User Tanks)
PTrader: (0/0%)
Join Date: Oct 2007
Location: Los Angeles, third door on the left
Posts: 374
I once had this just cover a piece of mopani wood. I added some ghost shrimp (not because of this. I just wanted some) and they turned into little lawn mowers. It was gone in 1-2 days.
----
2x20-longs, one heavily planted. Platy rancher. They. Won't. Stop. Breeding.
To view links or images in signatures your post count must be 10 or greater. You currently have 0 posts.
irishspy is offline
Quote Quick Reply
post #10 of 10 (permalink) Old 04-08-2019, 12:07 AM
Snapdragon
Algae Grower

(View User Tanks)
PTrader: (0/0%)
Join Date: Mar 2019
Location: Gresham, OR, USA
Posts: 21
That's really cool! Would love to see a picture of it reaching out into the unknown if you happen to get one!
Snapdragon is offline
Quote Quick Reply