(View User Tanks)
PTrader: (0/0%)
Join Date: Dec 2017
Posts: 100
Weird growth on leaves
Any idea of what these stringy things growing on the leaves are?
Can see them better on the upper leaves. 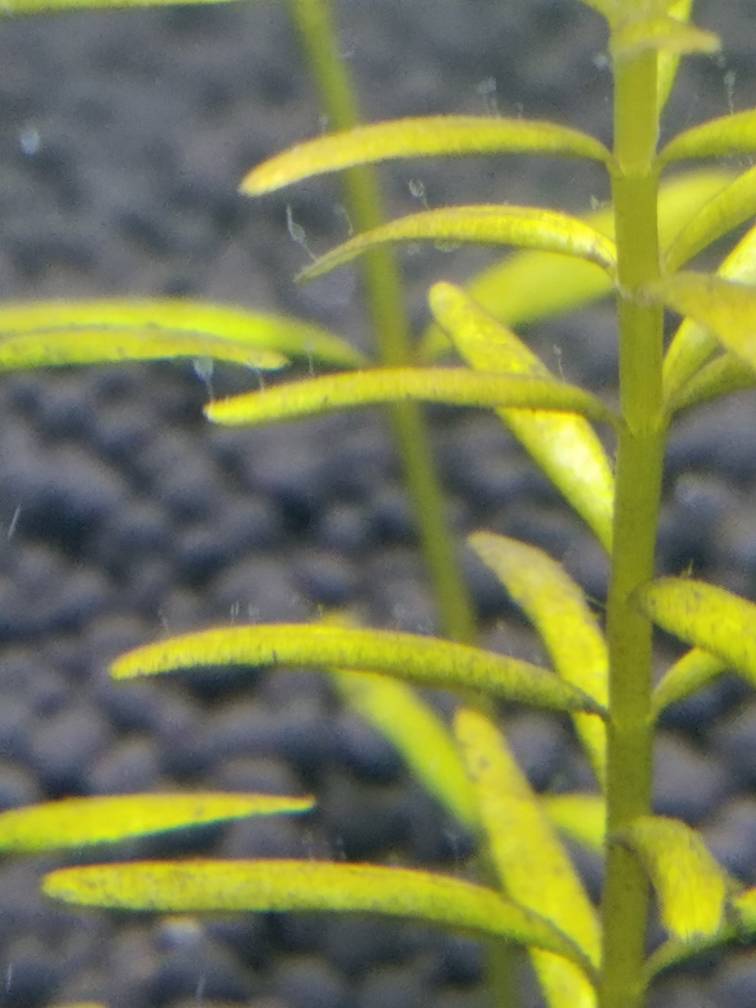 Small organisms looking for something to eat.
Cut down their food supply and they will diminish just like snails.
To view links or images in signatures your post count must be 10 or greater. You currently have 0 posts.
Growing is not that difficult.
Maryland Guppy is offline
Quote Quick Reply
post #3 of 8 (permalink) Old 01-11-2018, 03:29 AM Thread Starter
Aquarium_Noob
Algae Grower

(View User Tanks)
PTrader: (0/0%)
Join Date: Oct 2017
Posts: 373
Hydra can eat small bacteria that float in the water as well as larger organisms such as copepods. Although that doesn't quite look like hydra, the heads are too bulbous. It looks more like a fungus of some sort to me.
Last edited by JusticeBeaver; 01-11-2018 at 04:52 AM. Reason: sp
JusticeBeaver is offline
Quote Quick Reply
post #5 of 8 (permalink) Old 01-11-2018, 04:08 AM Thread Starter
Aquarium_Noob
Algae Grower

(View User Tanks)
PTrader: (0/0%)
Join Date: Jan 2010
Location: Mississippi
Posts: 542
It's been a while since I've experienced Hydra, but if I recall correctly, they generally aren't a problem unless you're trying to raise small fry. They supposedly favor polluted water conditions (like some worms used as fish food), probably due to the increased abundance of microscopic food sources, but I've seen them in healthy tanks, so don't panic. Other than feeding on very small fry and live food intended for your fish, I know of no other harm they cause. Think of them as tiny freshwater anemones (to which they are closely related). Like anemones, they can expell water from their bodies and shrink to a fraction of their inflated size, so trying to eliminate each one by visual methods is unlikely to succeed, and even if you were able to see every single one, if even one tiny arm or bud broke off while you were removing an individual, that one tiny body part would develop into a complete new individual, which would start an entirely new population. Gouramies are said to quickly eliminate a Hydra population in an aquarium (if other food is withheld), and other fish may eat them as well. Other than that, you could always sterilize the tank or, if you want to leave the tank and plants undisturbed, and because you have no fauna in it, you may try draining the tank completely and refilling with untreated tap water. The chlorine/chloramine levels should be enough to kill the Hydra without harming the plants, and if they aren't all gone by the next day, do it again. Also, keep in mind that they can be spread to other tanks via nets and other equipment. If you have a microscope, you might find it interesting to examine them before getting rid of them all.
"May the Fish be with you."
Olskule is offline
Quote Quick Reply
post #8 of 8 (permalink) Old 01-11-2018, 05:11 AM
snarkinturtle
Algae Grower