(View User Tanks)
PTrader: (0/0%)
Join Date: Jan 2018
Posts: 2
Just wanted a floating plant
Ordered frogbit from azgardens.com. And some shrimp. I ordered from them for the first time only because for some reason Amazon wouldn't deliver frogbit to me - I live in California. I don't know exactly why they won't ship it here. Maybe because Frogbit is an invasive plant?
Anyway, I paid $118. It took them more than two weeks. I expected to get twenty shrimp, instead I got eighteen barely shrimplets.
And this: 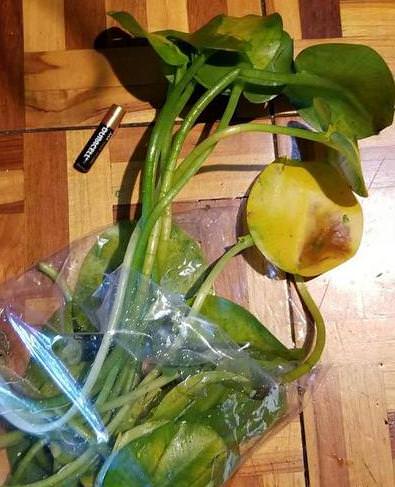 This is huge. Probably taller than my 29G tank. Apparently, instead of Amazon Frogbit (limnobium Laevigatum) I accidentally have ordered American Frogbit (Limnobium spongia).
Now I don't know what to do with it. I don't have a pond. I don't think I can return it (who the hell sends a plant back by mail?). And I don't want to pay huge shipping cost and wait for another two weeks for the plant to arrive.

(View User Tanks)
PTrader: (3/100%)
Join Date: Dec 2015
Location: Northern Va
Posts: 2,405
Theres plenty of people here that have amazon frogbit and a lot of people here are in Ca. Get it from this forum.
Just a noob


To view links or images in signatures your post count must be 10 or greater. You currently have 0 posts.
Nlewis is offline
Quote Quick Reply
post #3 of 5 (permalink) Old 01-06-2018, 10:46 PM Thread Starter
ilemming
Newbie

(View User Tanks)
PTrader: (0/0%)
Join Date: Oct 2017
Posts: 373
Amazon frogbit isn't explicitly illegal to ship into California but it's cousin Limnobium spongia is definitely illegal. Companies can face major fines and penalties if they're caught shipping this stuff so most don't bother because the risk doesn't outweigh the reward. However there is a bit of a loophole in that you can get it from people in your state since it's not crossing borders. Also if they sent you 18 shrimp instead of 20 shrimp then you definitely got ripped off by them.
JusticeBeaver is offline
Quote Quick Reply