(View User Tanks)
PTrader: (0/0%)
Join Date: Jun 2016
Location: Maryland
Posts: 46
Tank neglect at its finest :(
So, this is my 20 high, and it has been through a lot. For the past few months, the tank gas begun deteriorating because of my neglect.
It went from this: 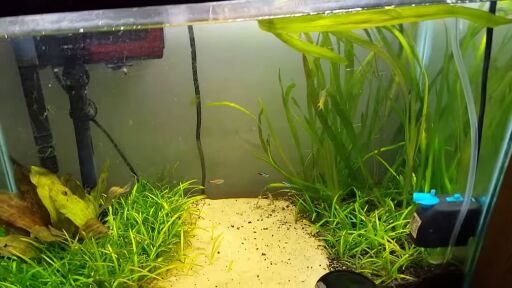 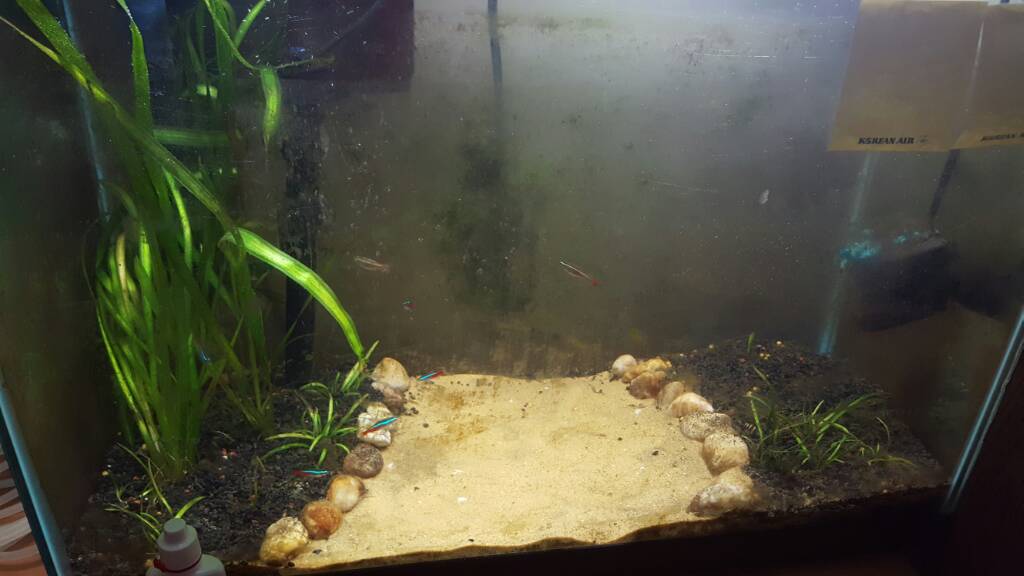 Gruesome right?
I am now in the process of restoring it.
What are your worst tank neglect mishaps?


(View User Tanks)
PTrader: (2/100%)
Join Date: Jan 2013
Location: United States
Posts: 598
I suppose this counts as neglect. I was young, had just gotten into the hobby probably a few months or a year before this incident. Did little to no research because I had no idea wonderful places like this existed.

Anyhow, I lived in upstate NY at the time and went to the city to visit my grandparents for what I think must have been an extended weekend. I fed the fish extra prior to leaving because I was so afraid they would starve and then tossed in one or two of those vacation feeders. A few days later I come back to an unimaginable sight. Algae covering nearly all the walls. Grime and gunk I can't imagine littering the substrate and some slime at the top of the water. Fortunately, I don't think I lost anything. If I did, it wasn't much. And it's nothing that a few water changes and some scrubbing couldn't clear up. But dear god what a sight.

This next one unfortunately did result in a death and comes to us courtesy of my sister and father. Somehow we both had what I think were called "firebelly newts." I'm sure they have another name now and probably did back then as well. We were both younger than in the previous story, but coincidentally, this still involves a trip to my grandparent's house. First of all, I feel regret to this day when I think of how those critters were kept and I wonder how they even survived as long as they did. One of these little Critter Keepers served as a home for this poor creatures entire life. A sloped gravel bed to allow the newt to stay dry and probably an inch or two of water if he wanted to get wet. I remember being told that was sufficient. Newt pellets were its sole source of nutrition. And forget about any basking lamp or UVA/UVB contraption. I would rinse the gravel/change the water when I remembered.

So my sister also had a newt, same sort of situation. It was winter and in the winter we turned off the heat when we left for the weekend to save on electricity. That meant poor little newt was going to have a hard go of it. So my father decided to stick the little critter cage on the window sill to get the guy some sun. Well, he got sun. Too much sun. The water evaporated and my sister came back home to a dried out and very dead newt.

As I said, this story happened before the other. I couldn't have been older than ten, meaning this happened a good 20 years ago now. But I still cringe and feel terrible for how I took care of these guys. In my childhood I've also kept goldfish, like most of us, in less than ideal conditions.

These are all stories of neglect in their own way. I do better these days but I still feel great regret when I think of how I treated those newts and poor Goldie the Goldfish. Somehow, however, each survived many years with me and helped to nurture my love of both aquatics and small pets in general. My wife laughs (and sobs) when she finds out how much I spend on my tanks and fish, but thankfully indulges me within reason.
Last edited by psych; 08-14-2016 at 09:25 PM. Reason: Another story
psych is offline
Quote Quick Reply
post #3 of 17 (permalink) Old 08-14-2016, 10:31 PM
ichy
Wannabe Guru

(View User Tanks)
PTrader: (3/100%)
Join Date: Apr 2015
Location: United States
Posts: 1,461
my 20l blew up on me with hair algae while i was gone last month. Needed a lawn mower to knock it back. It trashed my S repens carpet but...the algae was so thick it burned itself out!

(View User Tanks)
PTrader: (3/100%)
Join Date: Apr 2015
Location: United States
Posts: 1,461
Quote:
Originally Posted by jeffkrol View Post
Got to ask.. which 5 up board and are the pull down resistors attached?
pull up resistors and a lot of water changes is all I needed!

Opp's didn't think the above posted..
Suspended for 30 days for being awful to other forum members
jeffkrol is offline
Quote Quick Reply
post #7 of 17 (permalink) Old 08-15-2016, 12:38 AM
sohankpatel
Wannabe Guru My tank has had everything ripped out for a fresh start.
A 17-year old that faces parental opposition in this hobby


To view links or images in signatures your post count must be 10 or greater. You currently have 0 posts.
sohankpatel is offline
Quote Quick Reply
post #8 of 17 (permalink) Old 08-15-2016, 01:09 AM
Altheora
Algae Grower

At one point, my mother told me to clean it. I definitely cleaned it with handsoap. Fish was dead the next day.
Altheora is offline
Quote Quick Reply
post #9 of 17 (permalink) Old 08-15-2016, 03:17 AM
sohankpatel
Wannabe Guru

At one point, my mother told me to clean it. I definitely cleaned it with handsoap. Fish was dead the next day.
That happened to me when I was 6 or 7 as well, although general neglect killed the betta, not handsoap.
A 17-year old that faces parental opposition in this hobby

(View User Tanks)
PTrader: (1/100%)
Join Date: Oct 2011
Location: BC, Canada
Posts: 908
My tank turned into a clado forest, there was more clado than plant. I pulled out a softball sized wad of it. It was absolutely gross. Could barely see through the glass. It's a totally gorgeous ADA setup too. I would turn the light off when people came over...
Jaguar is offline
Quote Quick Reply
post #11 of 17 (permalink) Old 08-15-2016, 06:00 PM
AbbeysDad
Wannabe Guru

(View User Tanks)
PTrader: (0/0%)
Join Date: Apr 2016
Location: Central New York, USA
Posts: 1,360
1) Looking way back I remember in my youth having a 10g with an undergravel filter...and in those days we didn't test for ammonia, nitrites or nitrates, didn't gravel vacuum, and only rarely did water changes. I suspect that in time, the nitrates in that tank were through the roof.

2) I remember another time years ago when at about 5 years old Abbey had a goldfish name Gracie (later dubbed 'Gracie the wonder fish). I setup an auto feeder in her 10g tank and we went on vacation. We came home to find the water level at all of 2-4" deep and Gracie not moving or breathing. I struggled to tell Abbey her fish had died (the time before when her Beta passed it was a tragedy with buckets of tears.) She seemed to handle it okay, but wanted to say goodbye. I took her to the tank and as she was about to say goodbye, Gracie sprang to life! It was as if when conditions got very bad, she went into a kindof suspended animation. Anyway it was a scramble to get her into good water, tear down and reset the tank. Gracie lived another few years and was a big beautiful goldfish. Eventually she passed from a swim bladder disorder we just couldn't resolve. She was Gracie, the wonder fish.
Note: I do not know where the water went as the carpeted floor all around was as dry as a bone. It was winter, but I couldn't imagine losing that much water in a week to evaporation.
I do not know how the fish survived in such little foul water that had to be depleted of O2!
It was/is a wonder.

3) I have high nitrates in my well water most likely from the 95 acre farmers field across the road. I had been filtering water for water changes using API Nitra-Zorb, but also using reclaimed water from my basement dehumidifier. I never bothered testing the reclaim water, after all, it was moisture extracted from the air and should be nearly as pure as distilled water (I merely added Replenish for minerals and adjusted for pH. At a partial water change I used 5g of filtered water and 15g of reclaim water. Many of the fish showed signs of extreme stress...clamped fins, flashing, gulping air at the surface...I quickly treated with Prime but was confused. After testing, I came to realize that the reclaim water from the dehumidifier had very high AMMONIA! I have lost a couple of the fish and a couple of others don't look good. I suspect some burnt gill tissue and don't know if this can heal. Interesting that some fish seem relatively unaffected.
Anyway, yet another foot shot.


What came first, the chicken or the egg. It was the egg, but not the egg from a chicken.

To view links or images in signatures your post count must be 10 or greater. You currently have 0 posts.
AbbeysDad is online now
Quote Quick Reply
post #12 of 17 (permalink) Old 08-16-2016, 12:25 AM
Savetheplants
Algae Grower

(View User Tanks)
PTrader: (0/0%)
Join Date: May 2016
Location: Los Angeles
Posts: 133
My 20 gallon Eclipse 2 had two T8s. In the beginning we had Anubias, Java Fern and Java Moss. I dosed once a week with Tropica Master Grow with no CO2. The Anubias went crazy and grew up the back of the aquarium. But then one of the light fixtures failed and I was left with only one T8. After that the weekly dosing fell by the wayside and the Java Fern died and the Anubias languished. The tank suffered years of neglect.

It has been recovering for the past three months. The plants suffered but the fish made it and are both over five years old. It's never too late to recover.
Savetheplants is offline
Quote Quick Reply
post #13 of 17 (permalink) Old 08-16-2016, 04:09 AM Thread Starter
Potassium Nitrate
Algae Grower