(View User Tanks)
PTrader: (22/100%)
Join Date: Jan 2010
Location: NYC
Posts: 379
My tanks (warning: many pics)
I get asked to share my tanks, and usually I'm pretty reticent but since I'm asking for help to build that Kindergarten tank, it's probably best that I let you get to know me better.

This was a 5.5 that was sold to a new member here. It was home to some yellow Neos with the racing stripe. They were pretty awesome. Also had a dragonfly larvae mishap. Larvae was removed and raised separately (and emerged over summer as a dragonfly btw). Great learning experience all around for the kid. She certainly learned what dragonfly larvae eat... I'll be honest, I miss this tank.

This was a 10 that I recently tore down. I had six tanks (MTS hit me hard). I'm trying to get down to three (but upgrade one of them to a bathtub of a 125, heehee). It was my least maintenance tank, had a substrate level Mattenfilter before I even knew what a Mattenfilter was, and was the healthiest of all my tanks. I mounted epiphytes to the emerged driftwoods, occasionally spraying them and they bloomed for me this spring. The filter cascaded down the driftwood for some waterfall aeration, and kept some lovely mosses alive. It was a neat tank for something that was thrown together of extra supplies. It was specifically set up for a dragonscale plakat betta. He is mean and amazing. And orange.

Here is the betta again. He is named Rocket. He was moved to a 30 tall where the water is kept at half level because I use the top half as something of an orchidarium. When I get my 125, it is replacing this and will be home to Rocket (who has mellowed in his old age), a school of CPDs and hopefully yellow racing stripe Neos. Plants tend do do annoyingly well in this tank. Annoying because they're not my target. Again, low maintenance, even neglected because I found cladophora in it and that made me sad. The tank is right by the kitchen sink so Rocket gets to say hi every day. I drop seed shrimp in for treats and blackworms populate the substrate so care is negligible (I judge feeding time based on how fat Rocket is, he begs when he's hungry too). Mostly top-offs.

View from the other side with a bit more water in the tank. 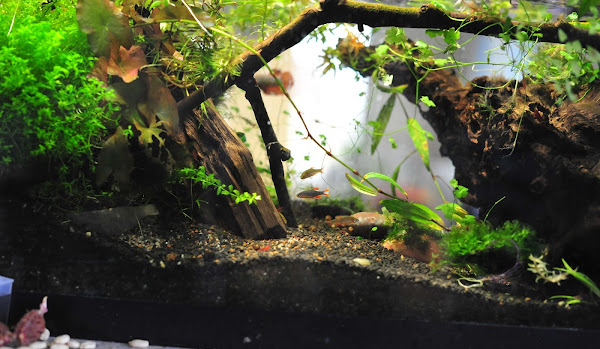 And my green tank. The lights turning on is the morning alarm clock. I'm always elbow deep in this tank. Home to lots of Sakuras (which I will be thinning for the classroom tank), Tangerine Tigers, Blue bees, and some fish, cory pygs, least killies (until they get moved to the classroom tank), otos cocama and vittatus, and lots of blackworms.

Is anyone still reading? If you are, thank you.

I set up these two tanks simultaneously, I wanted more mini catfish <3 so they are sand tanks. MTS capped with sand. All my tanks use MTS in some form)
This one is an experiment with natural light. Used to home 12 Hara jerdoni. 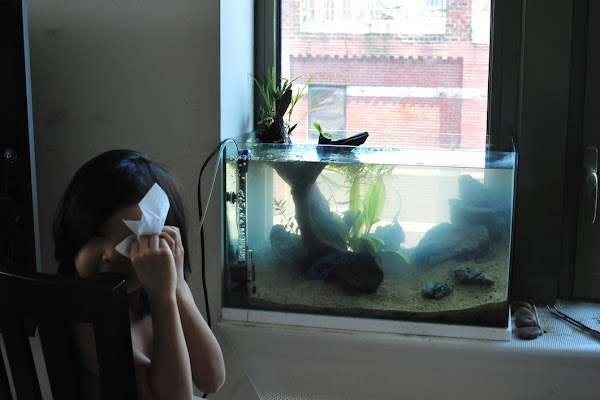 And this one is seeded with peat for Barbus hulstaerti. The H.jerdoni got moved here eventually.

And later:
Now it's a shrimp tank, home to C.babaulti stripes, Blue pearls, Blue bees, and I recently added OEBTs. And many many seed shrimp that are harvested for my fish. 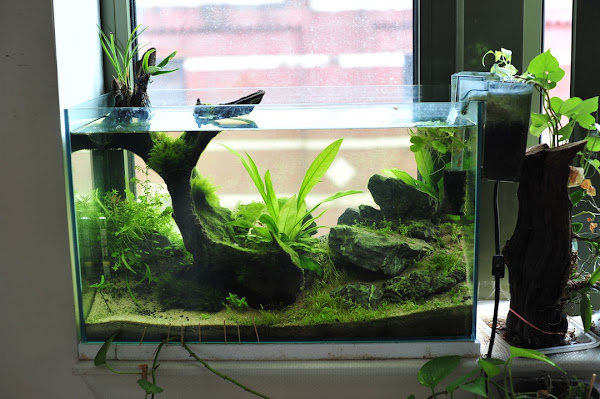 Home to 12 surprisingly active Hara jerdoni, 9 Barbus hulstaerti (all I could afford at the time), and 5 Rivulus speciousus. They LOVE seed shrimp and blackworms. Feeding time is fascinating! The worms are certainly bigger than any of them but the wrestling match always favors the fish. The H.jerdoni literally get tossed around a bit. I love their little mustaches. (I will try to get more pics) 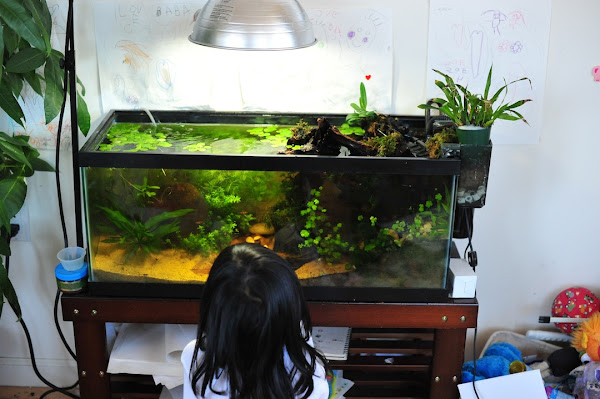 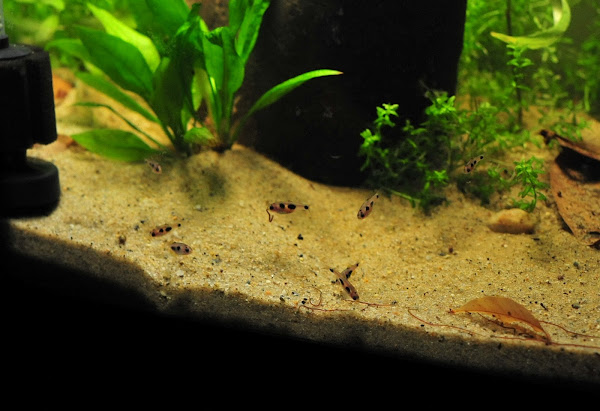 And that's The End. I hope it was enjoyable. Thank you My goodness. Now I want to get another tank, or three. These are amazing
-Calvin
cprash is offline
Quote Quick Reply
post #6 of 28 (permalink) Old 09-24-2012, 04:39 PM Thread Starter
jellie
Planted Tank Obsessed

(View User Tanks)
PTrader: (22/100%)
Join Date: Jan 2010
Location: NYC
Posts: 379
Quote:
Originally Posted by ryu1 View Post
Hmmm.... this tank looks familiar, from heartnet? Glad it went to a good home if it is, sell it back to me if you decided that you have too many tanks.

I remember that series and my sister owned a book

Nice tanks you got there! I wish my tanks could look so vibrant...

Seeing all of these tanks makes me think feel like I'm doing it all wrong...

this is my 35 gal and there's nothing in there currently. I put my crs's in there too early and well bad things happened. Then I moved my blue velvets into my Sakura red tank. /IMG]
She has the wand too, it jingles and lights up when you angle it down, one of the very few battery operated toys she's allowed to have.
Thanks for sharing your tank. Believe me, it takes practice... and you have blue velvets?!? *melts

Yup I got them from speedie. started with 7 ended up keeping 2 alive D: *my fault for not knowing ADA Amazonia takes 2 months to cycle...* I was had one really nice one that was berried but she died because she didn't molt correctly. Like she had some eggs stuck to her. during the molt. I tried my best to help it but in the end i couldn't do anything. I want to get them again because i only have 2 males but man a college student's budget is really tight... and 4-5 dollars a shrimp +10 dollars SnH is a killer.

(View User Tanks)
PTrader: (11/100%)
Join Date: Apr 2012
Location: Houston,Tx
Posts: 764
Really like that tank by the window! Do you have algae problems with it receiving natural light?

(View User Tanks)
PTrader: (22/100%)
Join Date: Jan 2010
Location: NYC
Posts: 379
Quote:
Originally Posted by mistahoo View Post
Really like that tank by the window! Do you have algae problems with it receiving natural light?
Sent from my spaceship using Tapatalk 2.
Sending to the spaceship....

I don't call it a problem because the tank is pretty much zero maintenance (only top-offs), stays pretty, the algae is really easily removed (if I plant it out or block lighting, it just goes away), and the baby shrimp loooooove it. Mad shrimp in that tank, & that's how I finally felt ready to try OEBTs.

Aw, thanks again, all. I'm gobsmacked. I hope the shrimp give you lots of love, aokashi.

Heartnet: ASAP as long as it's reasonably priced. I missed one on craigslist by 4 hrs last week

But I do think it's a good thing because I have to focus on this classroom tank.
Not today
jellie is offline
Quote Quick Reply