(View User Tanks)
PTrader: (0/0%)
Join Date: Jun 2020
Posts: 24
Problem or normal growth?
So I have some very young java fern I placed in my 20g bout 2 months ago. They are all new sprouts off the mother plant, which completely died out due to my lack of knowledge bout lights and ferts. I trimmed most of the old dying leaf off young java fern and only left enough to glue/tie to driftwood in new aquarium. I have since changed my lights and started adding ferts(2ml of seachum flourish once a week) and most everything else in the aquarium seems to be doing alright. I even have some moneywort that has morethan tripled its size in the last month. The plants in the aquarium are java fern, narrow leaf and the trident shaped one, one large anubias, one anubias nana, moneywort, and lots of java moss. Now my question is, the tips of a couple the baby shoots I put in there are turning clear. Not new growth, but the leaves that were present when it was glued to the driftwood. Actually I have not seen any new growth on any of the baby shoots in either tank I have... but only one or two getting clear leaf tips in one aquarium. Also a couple leaves died on the trident leaf java, but there also was a few new shoots on a few leaves aswell. The only other issue I see in this tank is a fuzzy algae of some kind that started growing on a couple of the moneywort leaves but that usually comes off when I run the siphon over the leaves during water changes. So is the clear java tips a sign of a deficiency or is this normal?
RogueZ is offline
Quote Quick Reply
post #2 of 5 (permalink) Old 06-26-2020, 06:55 PM
Seattle_Aquarist
Planted Tank Guru

You have no doubt heard the expression 'a picture is worth a thousand words'. I think a picture would help us answer your question.

-Roy
Blue Ridge Reef likes this.
Roy_________
To view links or images in signatures your post count must be 10 or greater. You currently have 0 posts.

Here the tip is darker than the rest. This java fern hasn't changed in 2 months

Here is another that isn't doing well. But have a larger one in same tank looks great but not in pic.
Last edited by Darkblade48; 06-27-2020 at 03:20 PM. Reason: Please use the edit function for back to back posts to keep threads cleaner
RogueZ is offline
Quote Quick Reply
post #4 of 5 (permalink) Old 06-29-2020, 04:54 PM
Seattle_Aquarist
Planted Tank Guru

The clear tips on the java ferns (Microsorum pteropus) are normal. The leaves grow from the tips and the clear areas are new cells that have not yet started to create chlorophyll which gives the leaves the green color. The leaves do not have the healthy green color I would expect. Since you are only dosing 2 ml in your 20 gallon once a week I suspect insufficient nutrients. Since Seachem says once or twice a week I would dose twice a week and see if the new leaves emerge more quickly and are healthier looking. A better all-in-one fertilizer is Nilocg.com Thrive. Once you use up the Seachem Comprehensive change over, you will get better and healthier growth.

My 30 gallon with Microsorum pteropus 'Trident' and 'Windelov' 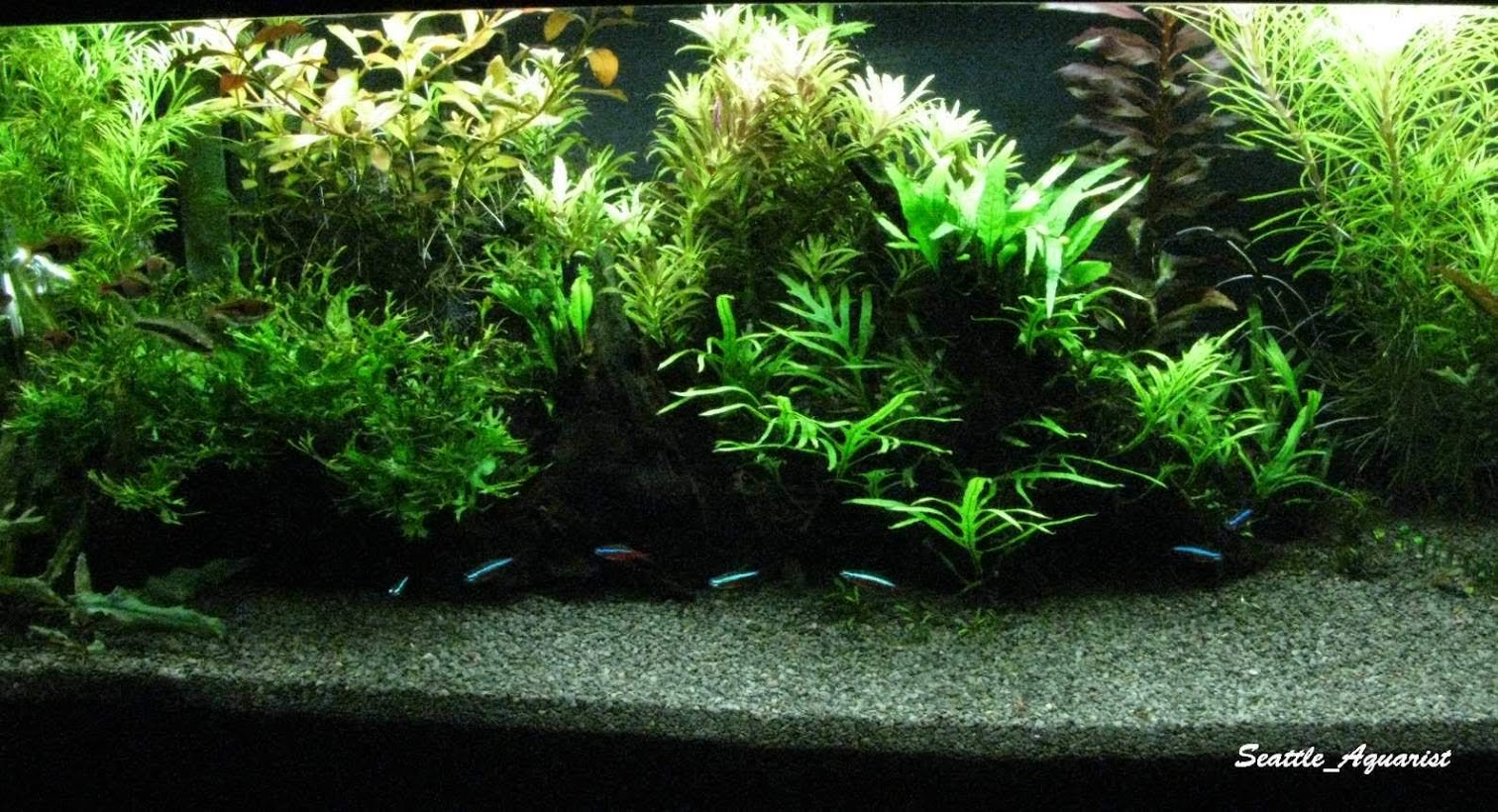 Roy_________
To view links or images in signatures your post count must be 10 or greater. You currently have 0 posts.

(View User Tanks)
PTrader: (0/0%)
Join Date: Jun 2020
Posts: 24
I was actually looking into getting thrive all in one. I have a slight nitrogen deficiency in my shrimp tank due to lack of bio load. Seen it has been highly recommended by many experienced aquarists
Seattle_Aquarist likes this.
RogueZ is offline
Quote Quick Reply