I have read somewhere that with these soils it's best to have a very low KH (1).

I use RO water which I remineralize to KH=2 (with Dennerle KH+) and GH=5 (Sera Mineral).

The measured KH is always around 1.

Also iron (JBL measurement kit) is always lowish at around 0.05 despite trying to raise it with EasyLife Profito.

The tank has been started fish and plantless without lights for 1 month and now planted only since Feb 14.

Plants are growing very well, even though the slower (Anubias and Cryptocorynes) have a very fain trace of dark (maybe BBA ?) on their perimeters (noticeable on the Anubias while on the crypto you only see them when they make O2 bubbles which cling to the filaments).

Any suggestions on handling KH and PO4 and Fe in this situation?

I think you may have slightly misinterpreted the material you read about KH and clay-based substrates. While it is true that most soft/blackwater aquariums (and by extension most planted tanks) should have a fairly low KH- I aim for a KH of 2-3, what you need to watch out for is that baked clay substrates, aquarium soil, turface, etc. all strip hardness from the water. This is an attractive feature of the substrate when you are using harder water from the tap, but must be managed when using RO water. If you dont remineralize the water you can end up with a KH of zero, which can lead to significant ph swings caused by co2, tannins, and other organic acids commonly found in planted tanks because the water will not have any buffering capacity.

This is easily addressed thru regular testing of KH and appropriate re-mineralization of ro water, cutting ro with dechlorinated, preferably carbon filtered, tap water, OR (and I would only suggest this if you test often and have some baseline for the effect it will have on your tank) by adding a few rocks, aragonite, or shells that do leach small amounts of carbonates in to the water- Ive only done this in larger tanks where the KH tended to run close to zero, and where the relatively minor buffering capacity it afforded me did not raise KH to the point that it was counter productive.

Like everything else in planted tanks the key is stability and balance. Active soils will by their nature strip KH from your aquarium water, but if you test your KH regularly and are aware of those properties, you can easily amend your water to keep the KH at the ideal range of 2-3. The rate at which your substrate pulls KH from the water will lessen over time, and usually levels off completely after 1-2 years depending on the substrate, so youll need to test continually to make sure youre adjusting the waters hardness accordingly.

Initially I would re-mineralize your water to a KH of 3 or 4 to help offset the KH stripping properties of the soil, and drop that down to 2 once the soil has aged and is less actively stripping KH from the water. The key is regular water changes of 25-50% a week for the first few weeks until things level out. This will also help keep ammonia from spiking to dangerous levels. After a few months, the tanks inherent KH lowering properties will begin to level off as the system stabilized. At that point you can begin to remineralize your makeup water to a level closer to the target KH of the aquarium.

Right now I am mineralizing the RO with Sera Mineral for the GH and Dennerle KH+ for carbonate hardness aiming for 3 and usually changing 35 liters liters of the 125 net each week.

Right now the tank is still fishless and NO2 are always 0 and NO3 are slowly diminishing and are now somewhere between the 12.5 and the 0 of the Sera testing kit (as a wild guess I'd say around 8).

So I'm worried that changing more water will abate nitrogen further with problems for the plants.

As a matter of fact I'm seeing the new leaves on the Anubias being quite paler than those of the plants when bought. Will try uploading pictures to see if they give clues to elements lacking. 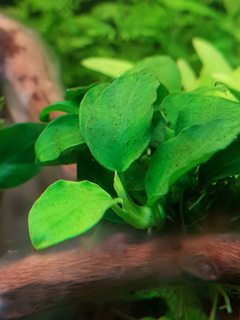 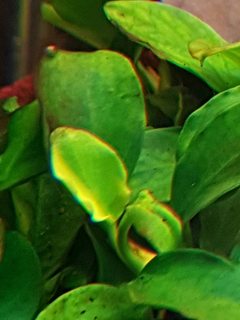 Also these are my Hygrophila Siamenses 53b and you can see the new leaves are larger and yellower: 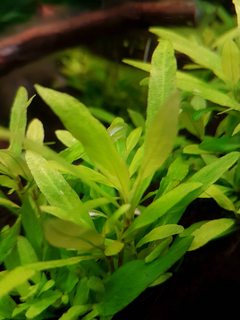 And last but not least the Cryptocorine Wendtii "green" are showing brown discolorations of the leaves as in the center of this pic: 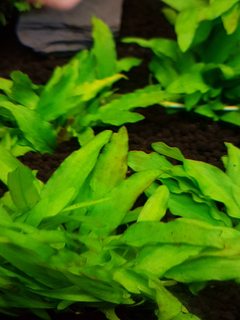 Don't stop doing water changes, just add some root tabs under the plants and consider moving the anubias to a more shaded area in the tank. If you are running medium to high light and supplementing co2, you are going to have to add ferts to keep everything in balance. You have to keep light, co2, and nutrients in balance or youll constantly be fighting some kind of issue. Without any fish in the tank, the plants are going to quickly use up all of the available nutrients if you dont supplement.
rjalex and rjalex like this.
AdamRT is offline
Quote Quick Reply
post #5 of 5 (permalink) Old 02-28-2018, 06:10 AM Thread Starter
rjalex
Algae Grower

(View User Tanks)
PTrader: (0/0%)
Join Date: Feb 2018
Location: Rome, Italy
Posts: 46
Thank you very much.
I am trying to find the right dosing of Easylife nutrients.
So far I am measuring every 3-4 days and giving Profito for Fe (aiming for 0.1) and trace, Fosfo for PO4 (aiming for 1), Kalium for K (not measuring it yet).
Lights are two t5 Dennerle tubes (an Amazon Day and a Plant special) for 70W total (for 125 liters net).