(View User Tanks)
PTrader: (0/0%)
Join Date: Mar 2020
Location: TX
Posts: 19
Spec V Shrimp tank
Hi everyone - I thought I would start a journal for my Spec V kitchen tank. I just picked up the hobby earlier this year and this is my first attempt at any kind of aquascape, still have a long ways to go to catch up with some of the amazing tanks on here but it's a step up from where I started with fake decorations from Petco. (here's a link to my other tank: https://www.plantedtank.net/forums/1...-post2144.html)

A couple of things I learned - I think it was a mistake not doing a dry start. For at least the first two weeks I was constantly replanting uprooted HC.. I tried reducing/redirecting the flow and they would still come up every day. Then the tank started getting hair algae, and several clumps would uproot at a time all strung together (forget manually removing it, tugging on it at all would just uproot the HC again). I wish I would have taken some pictures of the tank at its worst in the first month - I was almost ready to scrap it and try a different plan, but kept stubbornly replanting and eventually it took.

Also somewhere around a month in, the HC started turning yellow and everything pretty much stopped growing. I was only dosing Flourish at the time and think the tank ran out of macros - I switched to Thrive+ and it almost immediately turned back around and started healthy growth again. It's been going a lot better since doing that and getting the Co2 dialed in, here's some progress pictures: 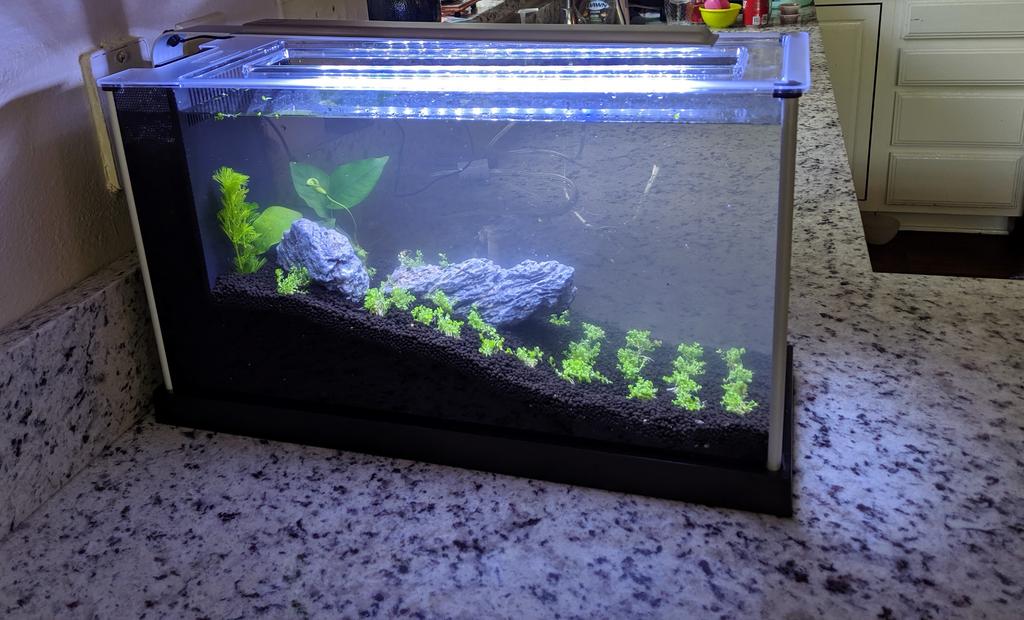 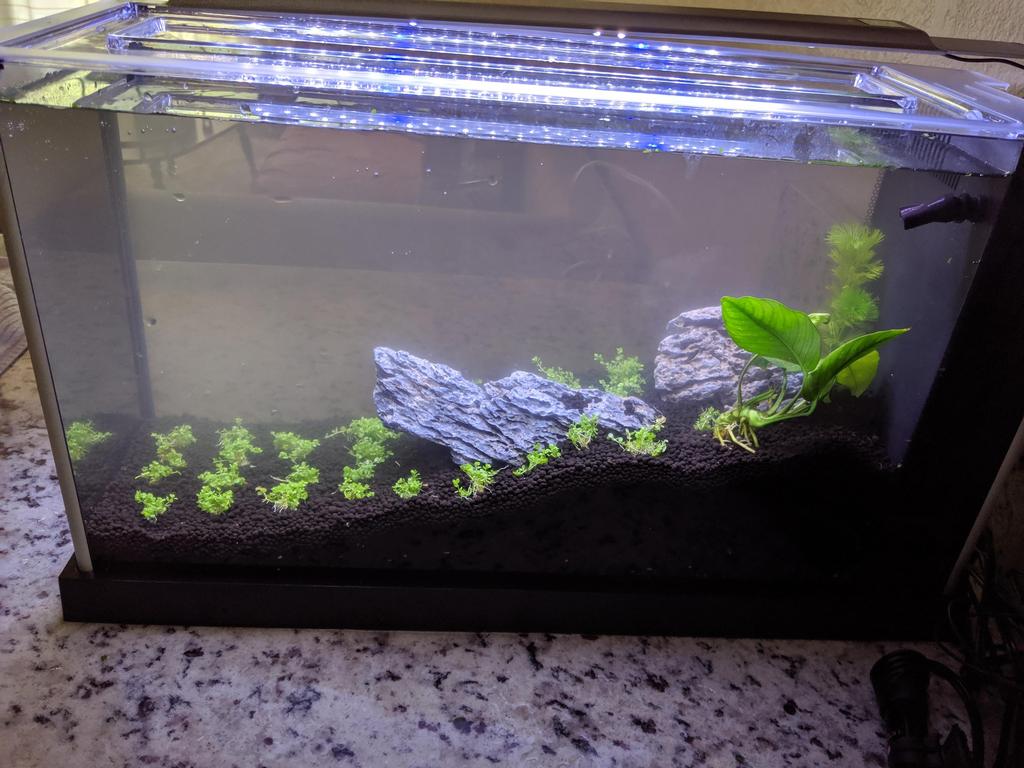 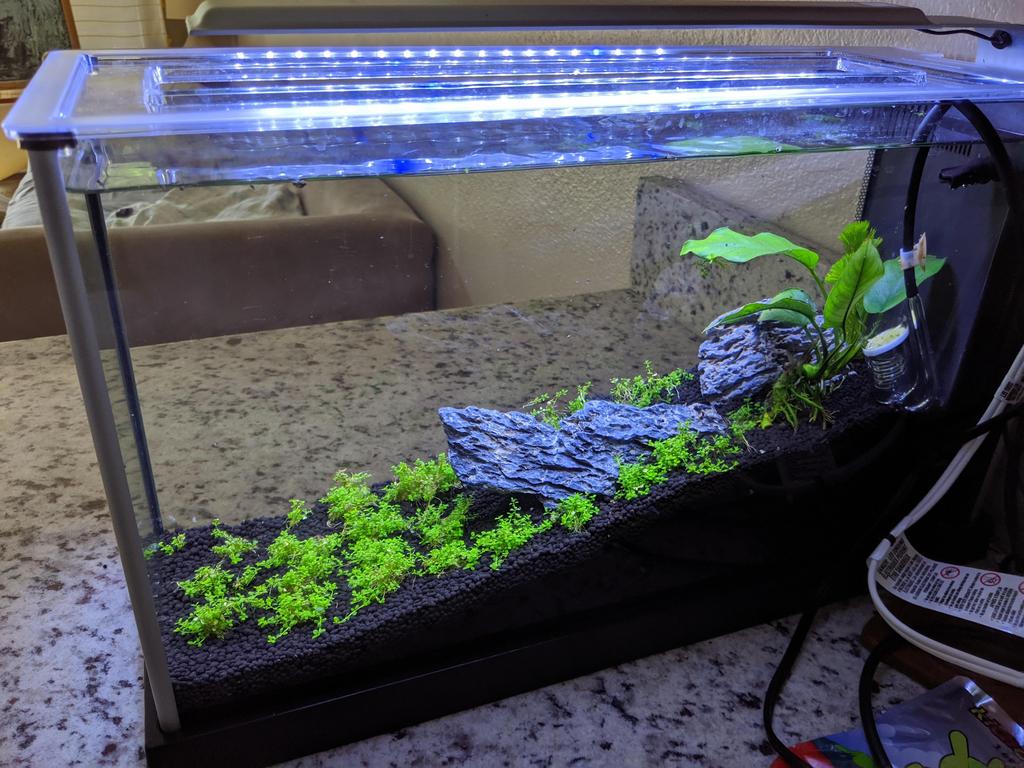 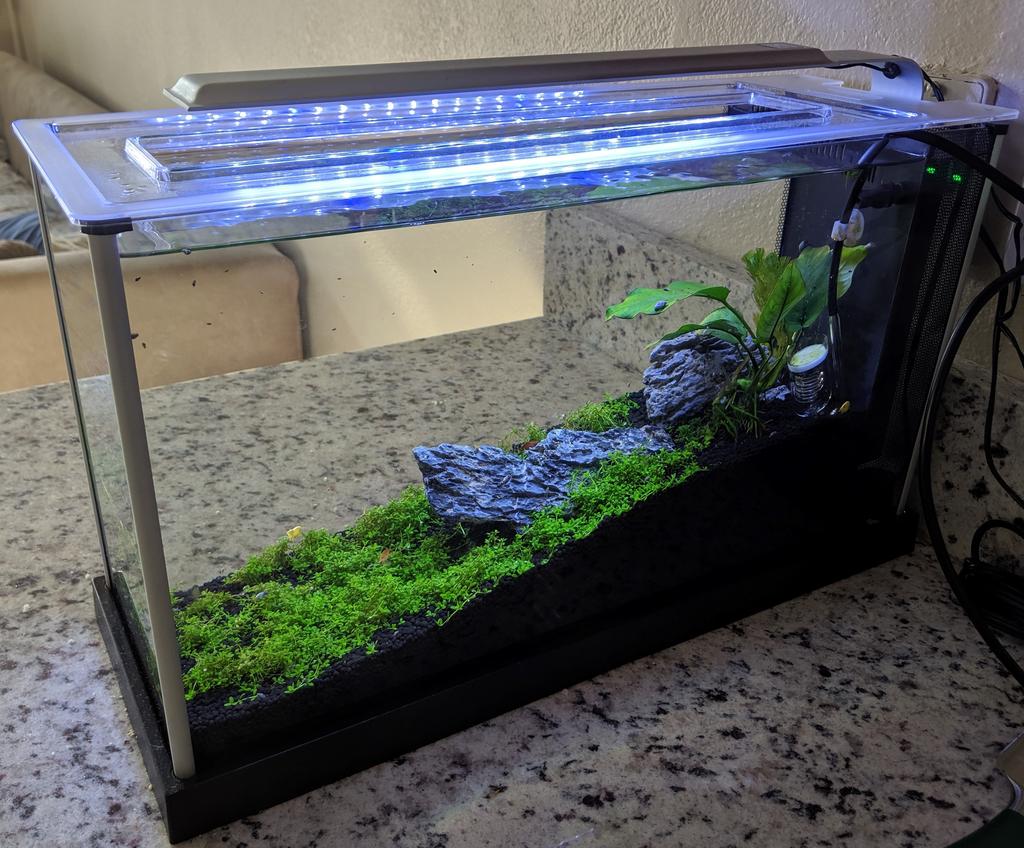 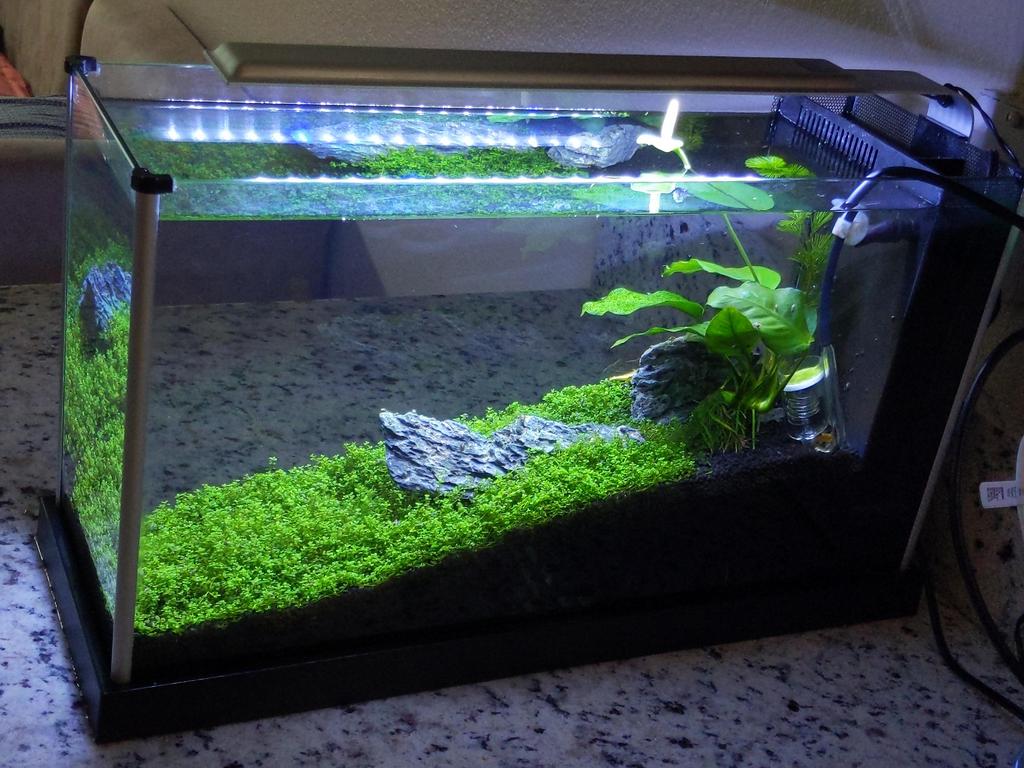 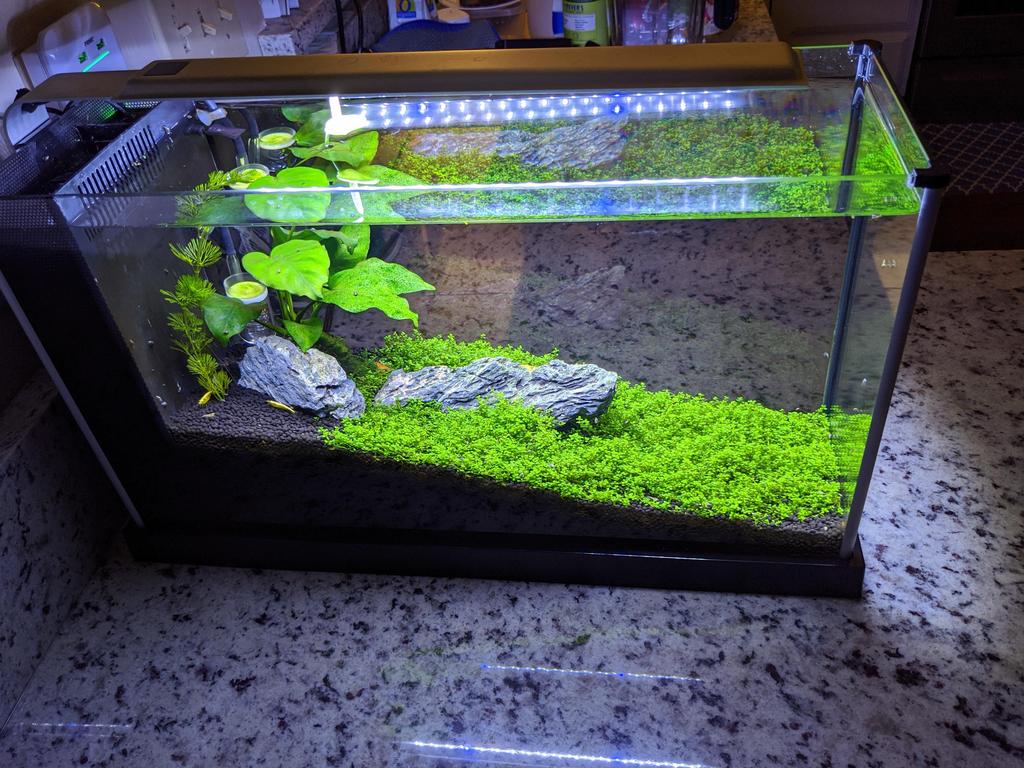 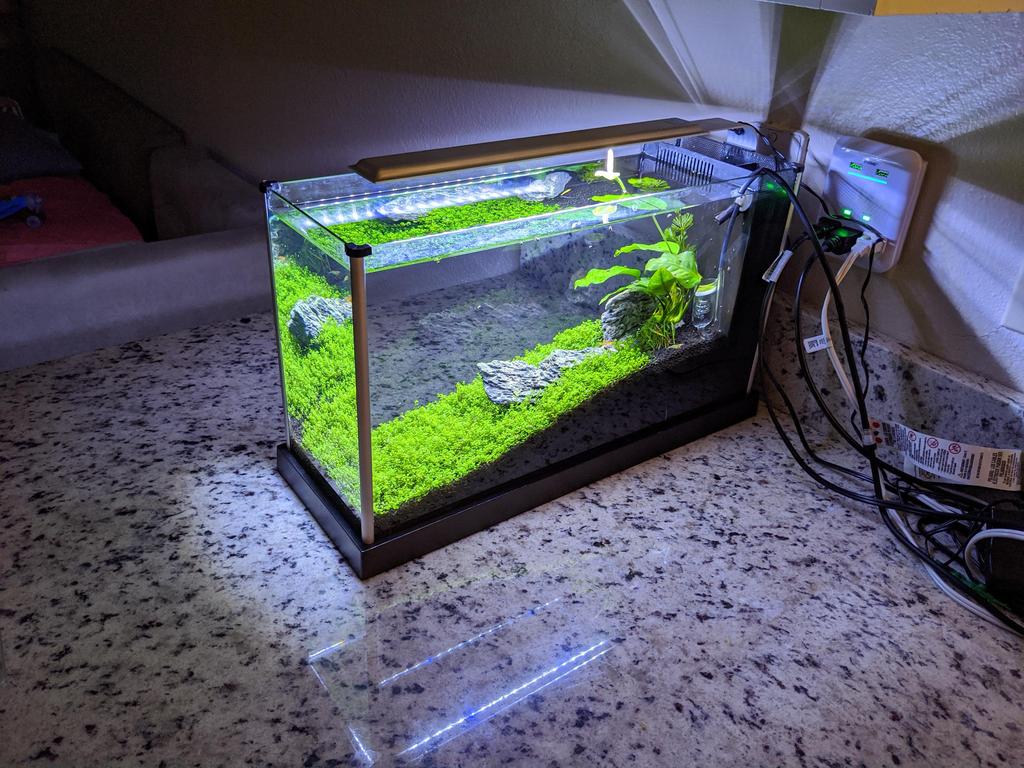 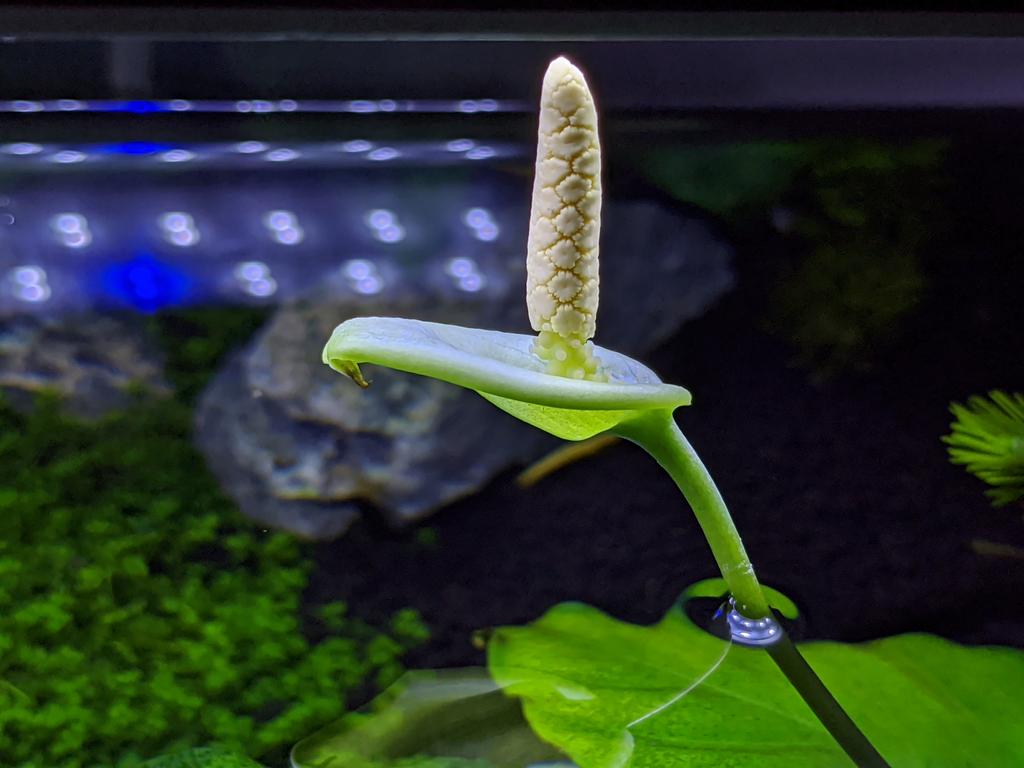 Yellow golden-backs (I got these from @Discusluv on the for sale board here - there's about 50 shrimplets now!): 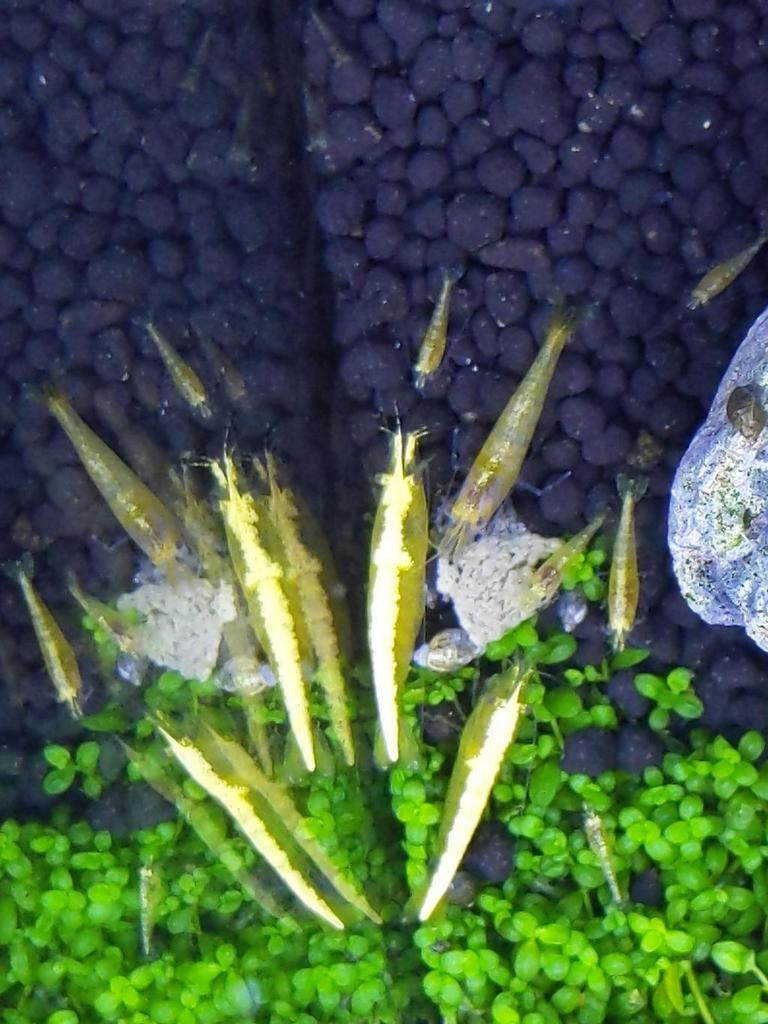 (View User Tanks)
PTrader: (4/100%)
Join Date: Dec 2017
Location: Elk Grove, California
Posts: 5,356
The yellow-backs look fabulous in all the green in that tank! Because the shrimp have thrived in such a short time under your care tells me you are a shrimp "natural"- lol!
I think your tank looks amazing. It is simple, but striking.

Thanks for the pictures and update.

(View User Tanks)
PTrader: (0/0%)
Join Date: Aug 2020
Location: Upstate NY
Posts: 5
I love the dark substrate contrasting with the bright green. Beautiful stone too. The slanted bottom is so interesting to look at. Well worth the work. The shrimp are gorgeous.
I've been hoping to start my own shrimp tank, and I've gotten all caught up in this huge list of plants I want to put in. Your simplistic tank has made me realize I don't have to go crazy. Thank you. Your tank... It's beautiful.
Good luck and keep us updated!
Discusluv likes this.
Last edited by BreadLoach; 09-02-2020 at 05:36 PM.
BreadLoach is offline
Quote Quick Reply
post #4 of 15 (permalink) Old 08-31-2020, 09:22 PM
Raith
Wannabe Guru

(View User Tanks)
PTrader: (35/100%)
Join Date: Jun 2014
Location: Edison, New Jersey
Posts: 1,653
For not having done a DSM, you are pulling it off! Looks great.
Discusluv likes this.
To view links or images in signatures your post count must be 10 or greater. You currently have 0 posts.
20 Gallon jungle tank
2 Gallon Sparkling Gourami underworld
2 Gallon jungle val madness bowl


(View User Tanks)
PTrader: (0/0%)
Join Date: Mar 2020
Location: TX
Posts: 19
Thanks for the kind words! I still have a lot to learn, going by this old post: https://barrreport.com/threads/the-1...aquascaper.25/ I'm barely out of step 1 (and not really, both me and my wife were super happy when we found the first new shrimplets and the tank starting to thrive).

The HC hasn't been trimmed yet and I think I may need some curved scissors to do a clean job with it, I'll post an update on how that goes.
Econde, Discusluv and BreadLoach like this.
chrisg is offline
Quote Quick Reply
post #6 of 15 (permalink) Old 09-02-2020, 06:10 PM
BreadLoach
Algae Grower


(View User Tanks)
PTrader: (0/0%)
Join Date: Aug 2019
Location: Michigan
Posts: 171
Looks great! How did you keep the substrate in place for the slope? Are you happy with the tank so far?
BreadLoach likes this.
Fish+Plants thanks you!!
Michigan
fish+plants is offline
Quote Quick Reply
post #8 of 15 (permalink) Old 09-12-2020, 06:45 PM Thread Starter
chrisg
Algae Grower


(View User Tanks)
PTrader: (0/0%)
Join Date: Mar 2020
Location: TX
Posts: 19
I had been meaning to do an update sooner but life got busy in the past couple of weeks. A day or two after my last post I was fiddling with the Co2 and broke my diffuser trying to re-attach the hose, so the tank went about a week and a half without any. The plants managed OK but hair/string algae started growing again and on a closer look I found hydra too: 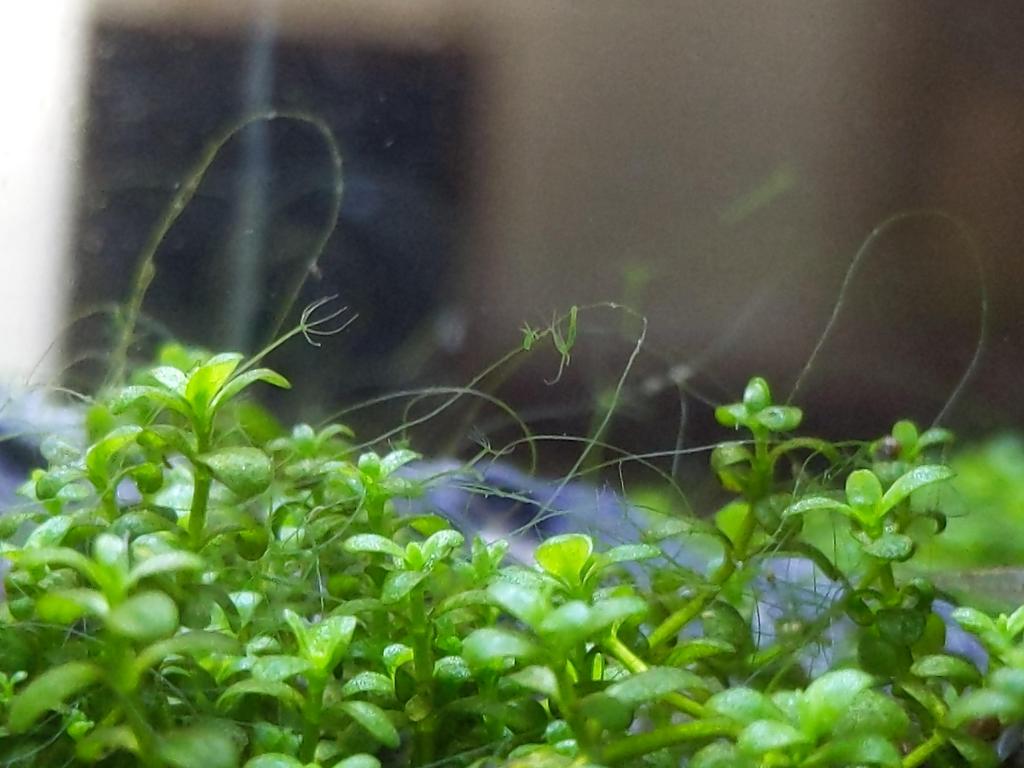 I think was able to take out most of the algae/hydra manually with a trim, I'll have to keep a close eye on it and make sure there aren't Hydra still hiding down in the HC. It's hard to say if I'm losing shrimplets to them but it seems like there's been more tiny newborns than juveniles in the following weeks so it seems likely. 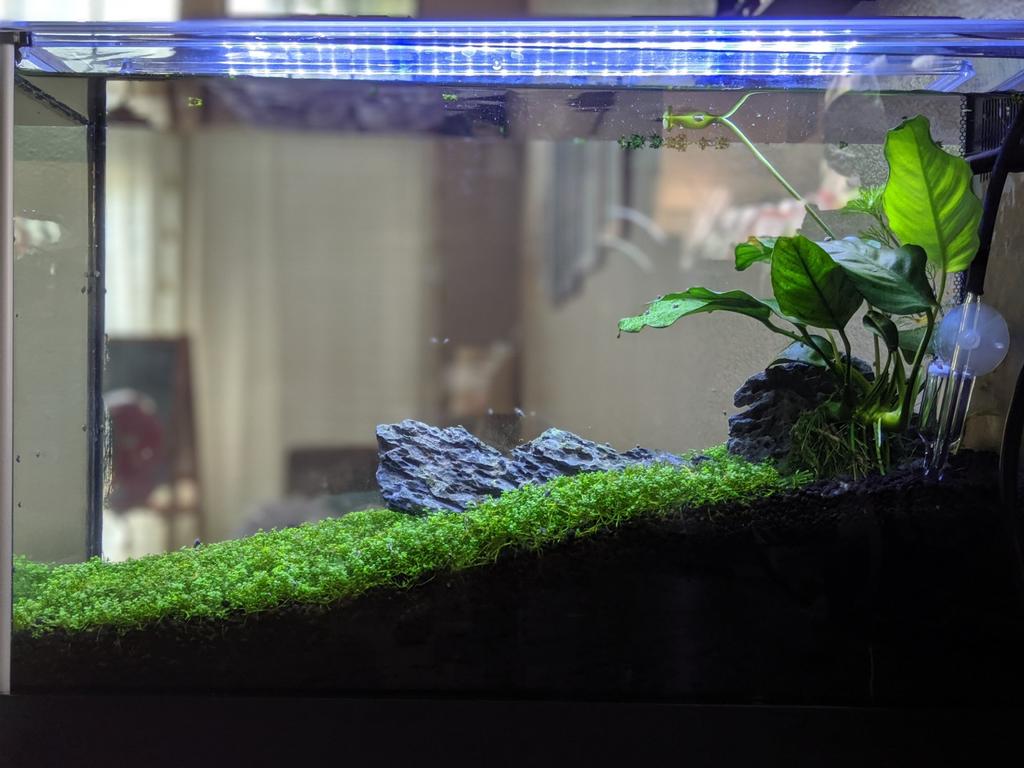 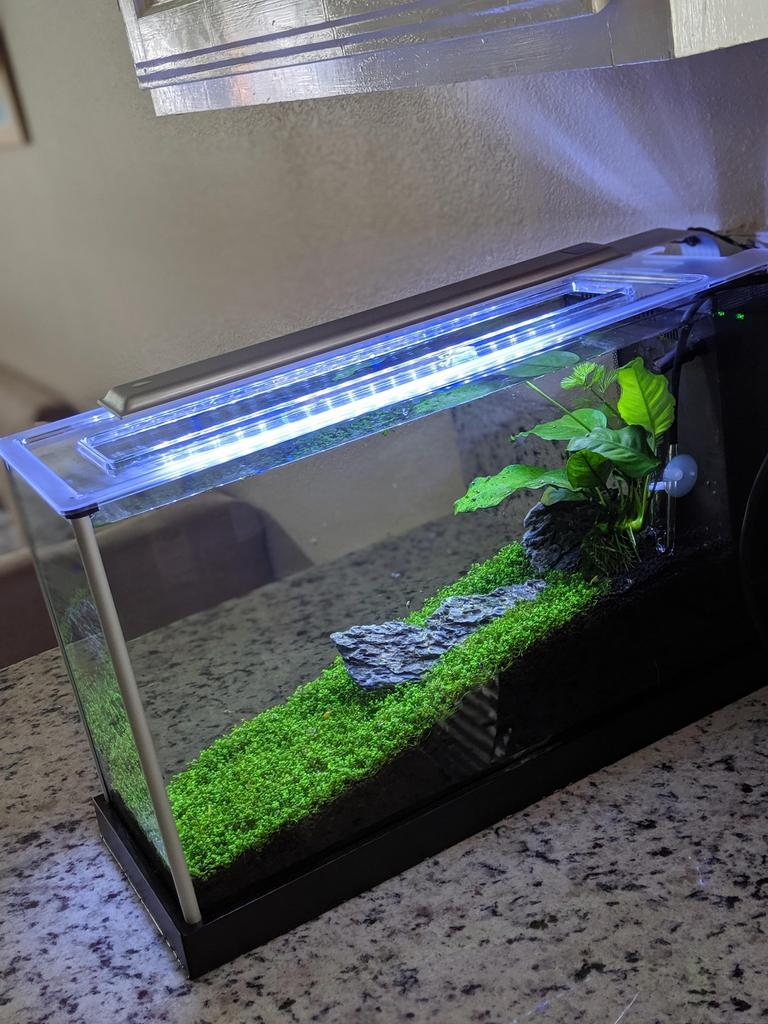 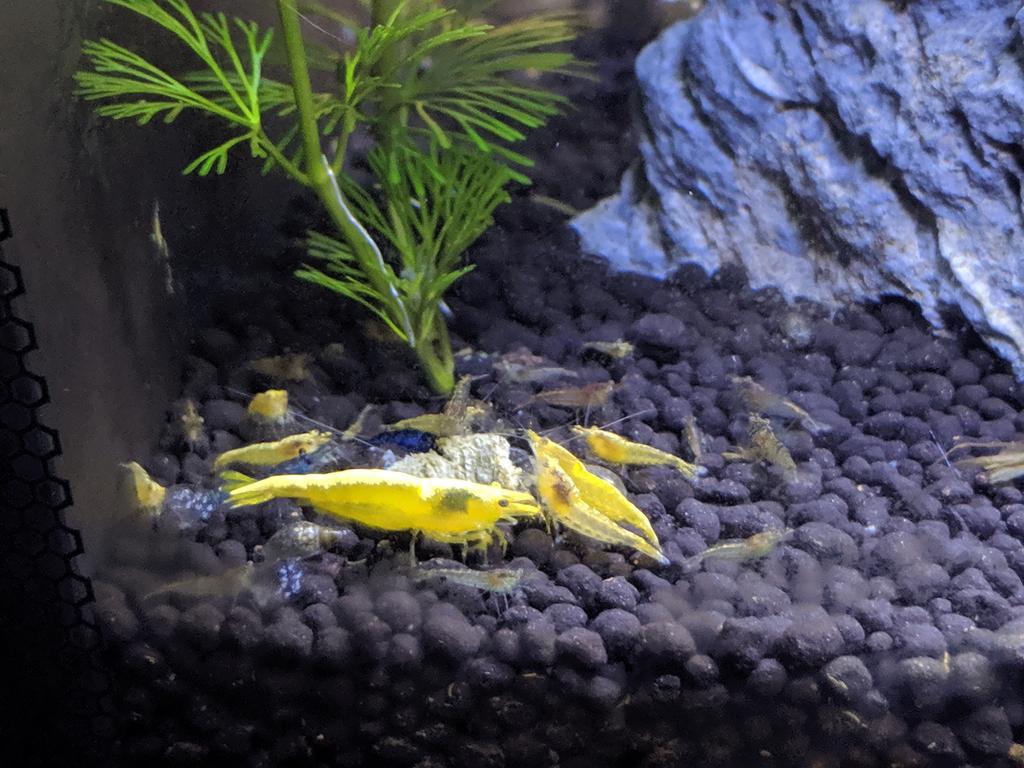 I'm pretty sure the wild-type colorations came from a low grade cherry male that was in the tank (the only adult losses I've had were two store bought cherry shrimp) - I will probably move these 'culls' over to my other tank as they get older and try to keep the yellow line breeding.

Quote:
Originally Posted by fish+plants View Post
Looks great! How did you keep the substrate in place for the slope? Are you happy with the tank so far?
Thanks! The substrate was pretty easy, I just poured it in and made the slope before flooding the tank, and did not rinse the stratum contrary to the packaging. No-rinse seems to be the way to go with this stuff and I didn't have any problems with cloudy water. I would say I'm pretty happy with it, I know there's nothing groundbreaking here but it's fun watching it grow out to roughly what I was envisioning. I feel like getting some first hand experience with carpeting plants helps 'unlock' that as a building block I can incorporate into more complex tanks in the future too.
Econde and Discusluv like this.
chrisg is offline
Quote Quick Reply
post #9 of 15 (permalink) Old 11-15-2020, 08:00 PM Thread Starter
chrisg
Algae Grower


(View User Tanks)
PTrader: (0/0%)
Join Date: Mar 2020
Location: TX
Posts: 19
It's been a while since I've done an update, thought I would share some of the problems and successes I've been having on this tank.. hair algae has really taken over in the past month, it's embedded in the HC and grows out to this each week between maintenance: 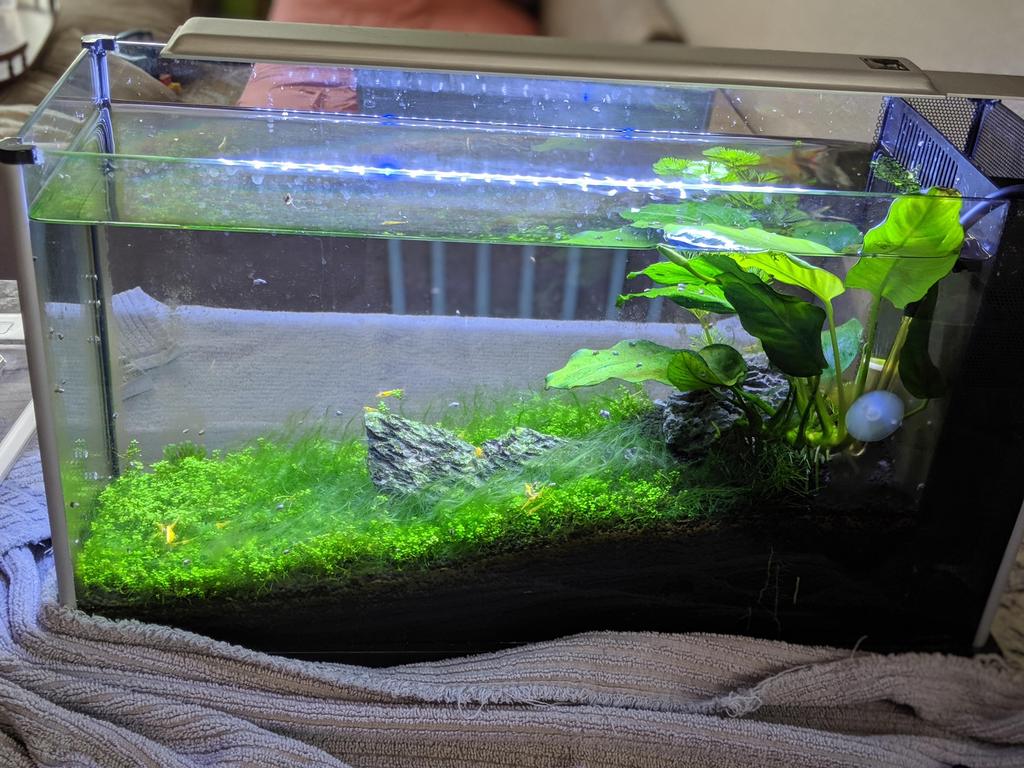 I had let the Anubius leaves grow in front of the powerhead which caused some problems getting Co2 diffused throughout the tank for a while, fixed that and have cut back lights to about 6 hrs a day with a siesta for the past couple of weeks, but I also think there's too much dissolved organics or maybe nutrients in general in the tank. There's a good layer of mulm under the carpet that can't be vacuumed and I'm hesitant to use either excel dosing or large water charges to combat algae since the yellow neo colony is thriving - either might hurt the population and the livestock takes precedence. 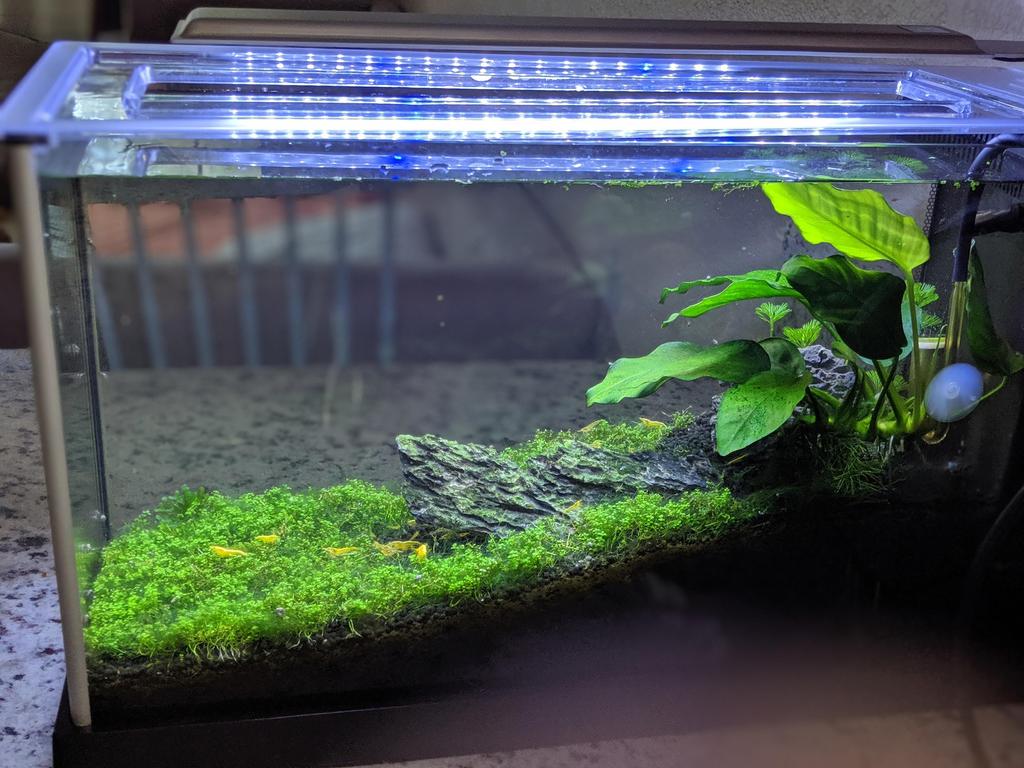 It cleans up pretty well for a couple days after a trim but algae is still strung all throughout the carpet, so I think it might be time to pull it up, (carefully) vacuum out the substrate and try something new. If it persists, it's at least easier to manually remove off other types of plants and I'll be able to keep the tank cleaner in general.

On the other hand, the colony is doing great - I had just started with 3 yellow neos and a couple low-grade cherries in the tank. They threw a bunch of wild-types at first, I've moved 4 containers of about 20 culls each over to my other tank and have good branch of yellows breeding, the little ones are all F2s now: 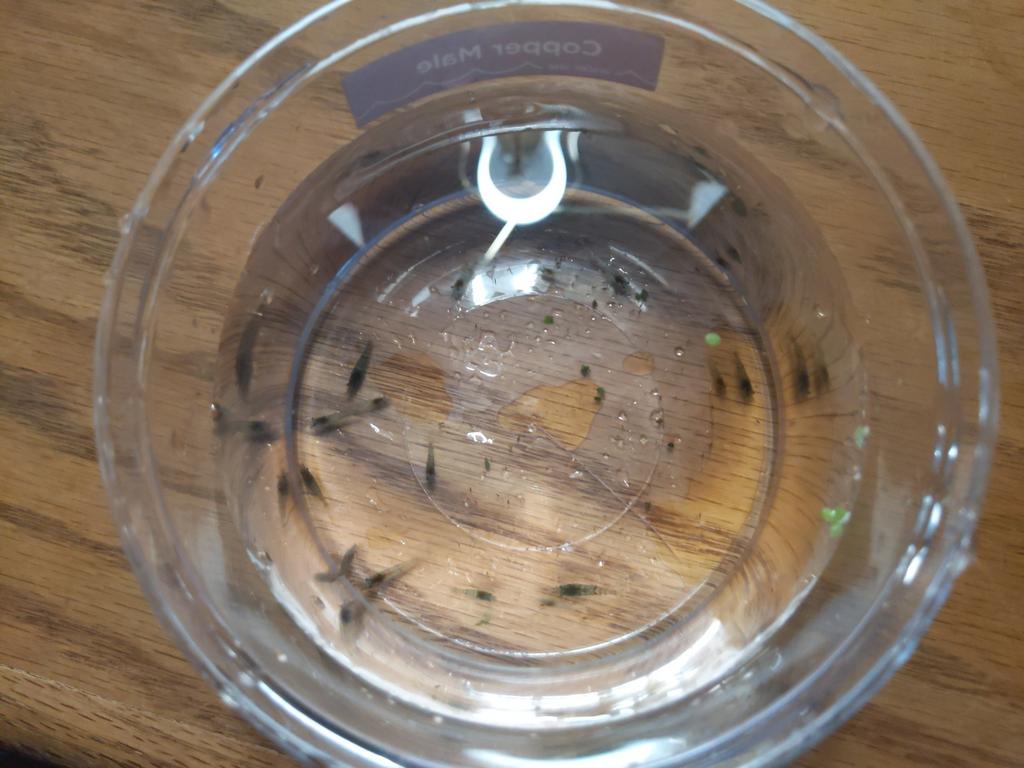 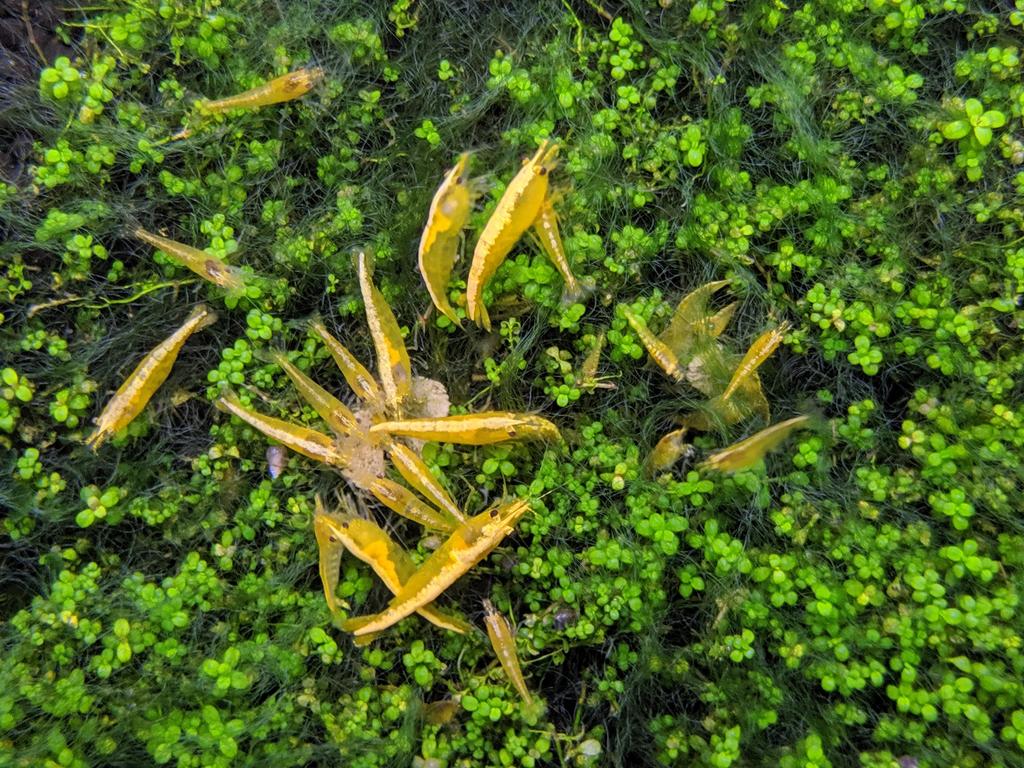 Next update will probably be a re-scape of the tank, still need to figure out what to do next but that's part of the fun.
Raith likes this.
chrisg is offline
Quote Quick Reply
post #10 of 15 (permalink) Old 11-16-2020, 12:26 AM
Raith
Wannabe Guru


(View User Tanks)
PTrader: (0/0%)
Join Date: Mar 2020
Location: TX
Posts: 19
Quote:
Originally Posted by gtu2004 View Post
Nice tank. Did you put any mesh over the slits on the filter compartment housing? Or how are you keeping the shrimplets out from the filter compartment?
Thanks! I've read this about Spec V's but never really found it to be a problem, the foam filter block past the slits covers that whole compartment and doesn't seem like it has enough of a gap around it for even little shrimplets to get stuck in. I've watched them climb in there to scavange around and they seem to make their way out OK, there isn't enough suction from the pump to trap them there. I'm not sure if they've changed the tank design at all from previous years, I just picked this one up a few months ago.
chrisg is offline
Quote Quick Reply
post #13 of 15 (permalink) Old 11-18-2020, 05:23 AM
David Henry
Newbie


(View User Tanks)
PTrader: (0/0%)
Join Date: Mar 2020
Location: TX
Posts: 19
So I decided to overhaul the tank this weekend - didn't really have a plan ahead of time, but my LFS has a good selection of stuff so I just tried to get some different colors/leaf types for some variation and I'm pretty happy with how it turned out so far. I also added 5 chili rasboras and 2 otos (I've read all the threads about chilis and shrimplets and know there may be a risk there, I'll add my experience to the pile and plan to transfer them to my 20G if it becomes a problem). They are tiny, adult neos are about twice their size so I'm hoping they go together OK. A couple of females have been berried for a while already so I should be able to gauge that sometime soon. The substrate was/is incredibly dirty after a few months with only shrimp and bladder snails, I vacuumed up about half of it in a go but didn't want to overwhelm the shrimp with more than one 50% water change at a time. I think the HC carpet really needed to be removed or the tank might have ran into problems with more than algae down the line. I may also trim the Limnophila down a couple inches, here's how it looks now: 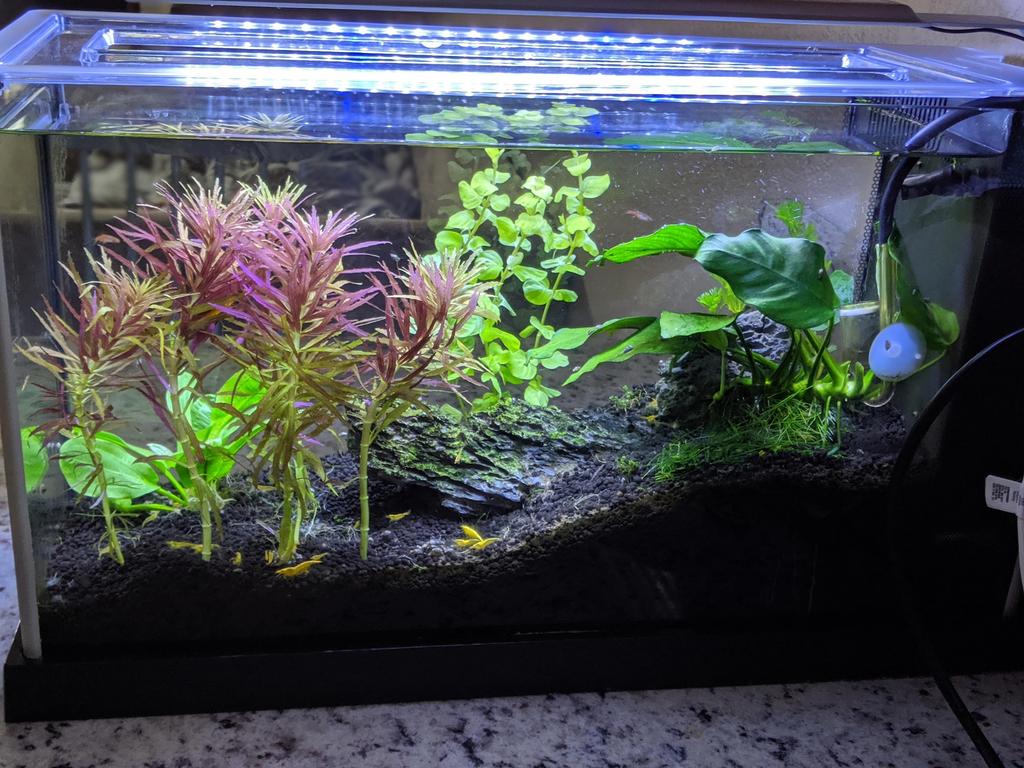 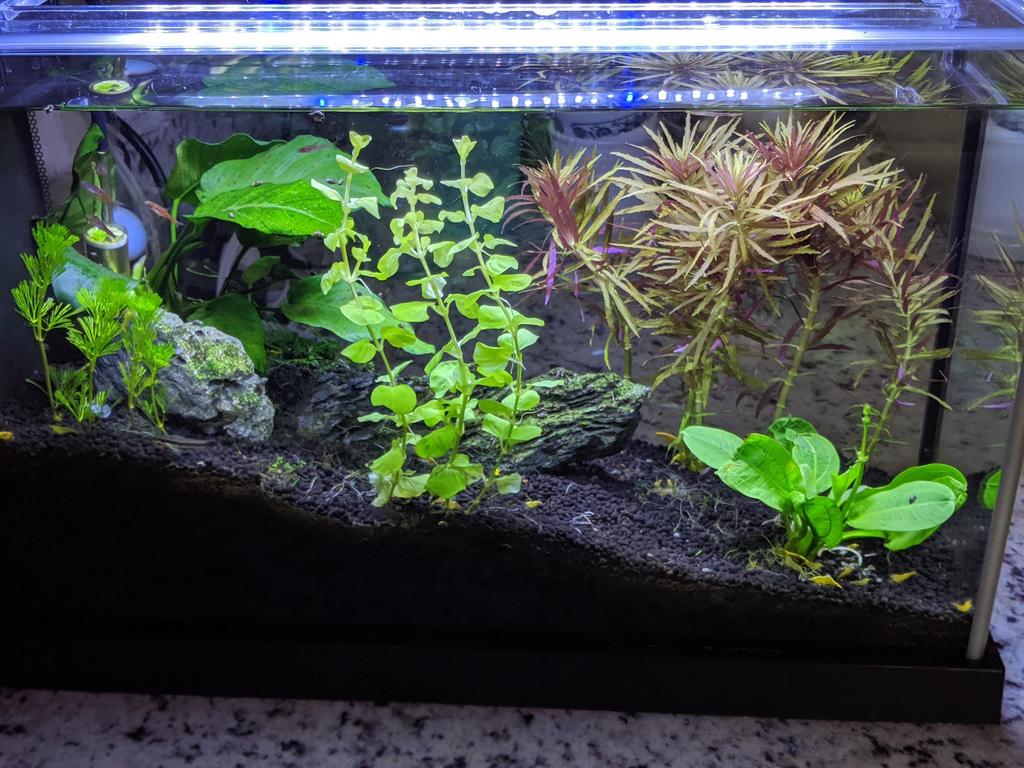 And in a first for me, I got to use some trade-ins as currency! These guys came from my other tank and paid for most of it: 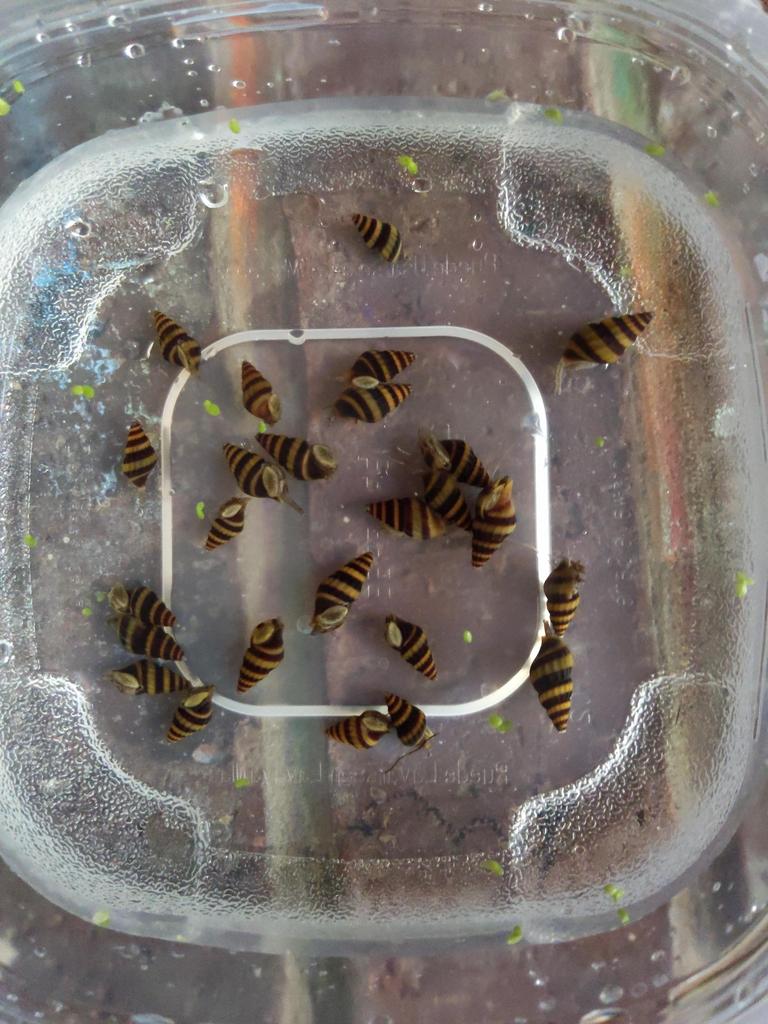 
(View User Tanks)
PTrader: (0/0%)
Join Date: Nov 2020
Posts: 1
What type of tank is that? Any specific name or where you bought it with?
Aidan Phan is offline
Quote Quick Reply