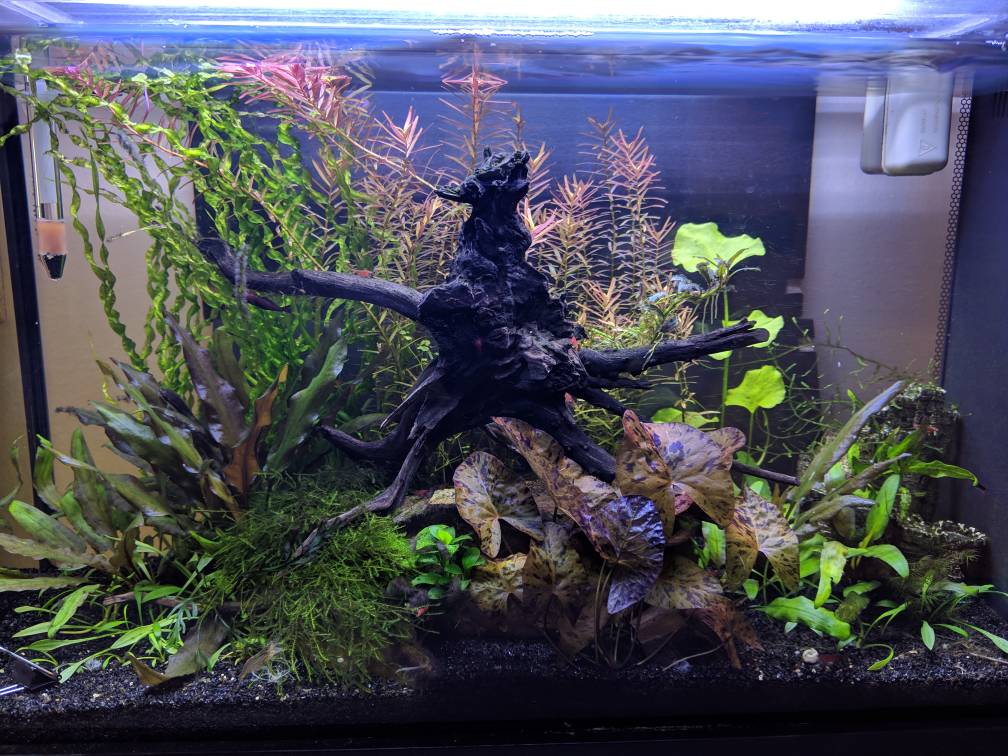 Hard to believe I've only been in this hobby for a year, but I got bit by the bug hard. I keep updating my 12 g long journal with Spec V updates so I figure it's time to give it the attention it deserves, especially since the other tanks are in grow out mode right now with no need for updates.

So here's the history of this tank:

I got it for $50 off Craigslist in September 2018. It already had eco-complete in it so I stuck with that substrate. I used some rocks I found on a hike and some Manzanita branches, with only "low tech" plants, like anubias, crypt becketii, Java fern, and a random dwarf lily I picked up from the discount bin at the LFS. I don't think I have any pictures of that version anymore, but long story short the anubias got covered in BBA and the tank was a nightmare to clean due to the excessive hardscape. In December 2018 I took it apart and set it up with worm castings, osmocote and Mexican clay capped with BDBS. At the same time I turned it in to an island scape.

I had a castle that my girlfriend loved, so I worked it in to the island scape: 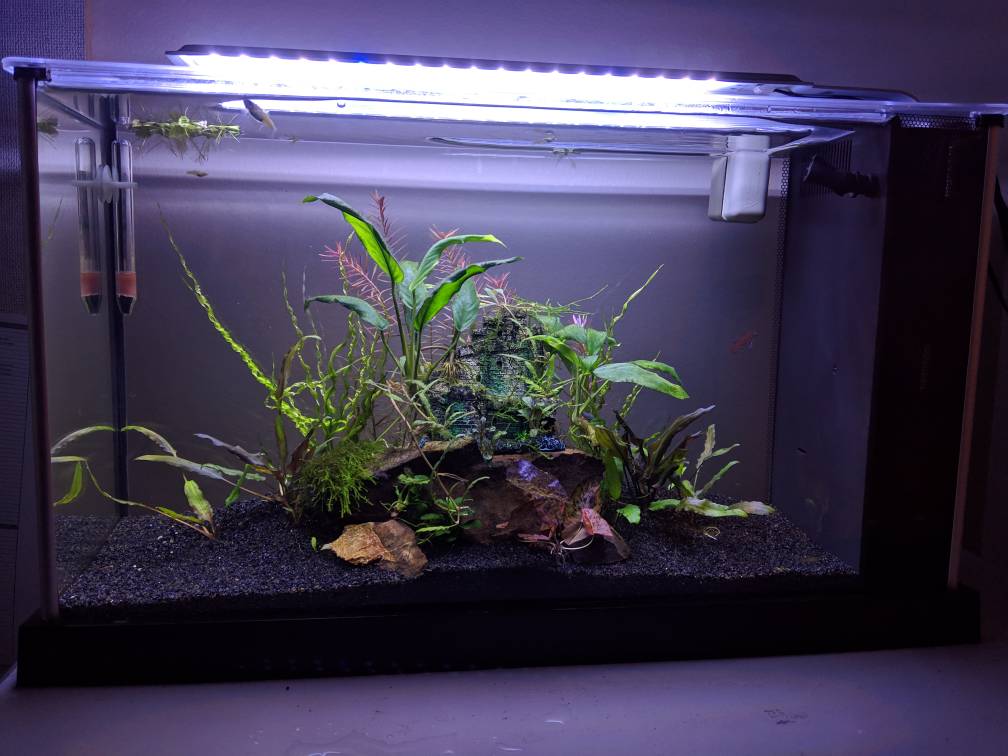 At the time, I just had a scarlet badis and my red cherry shrimp in there. 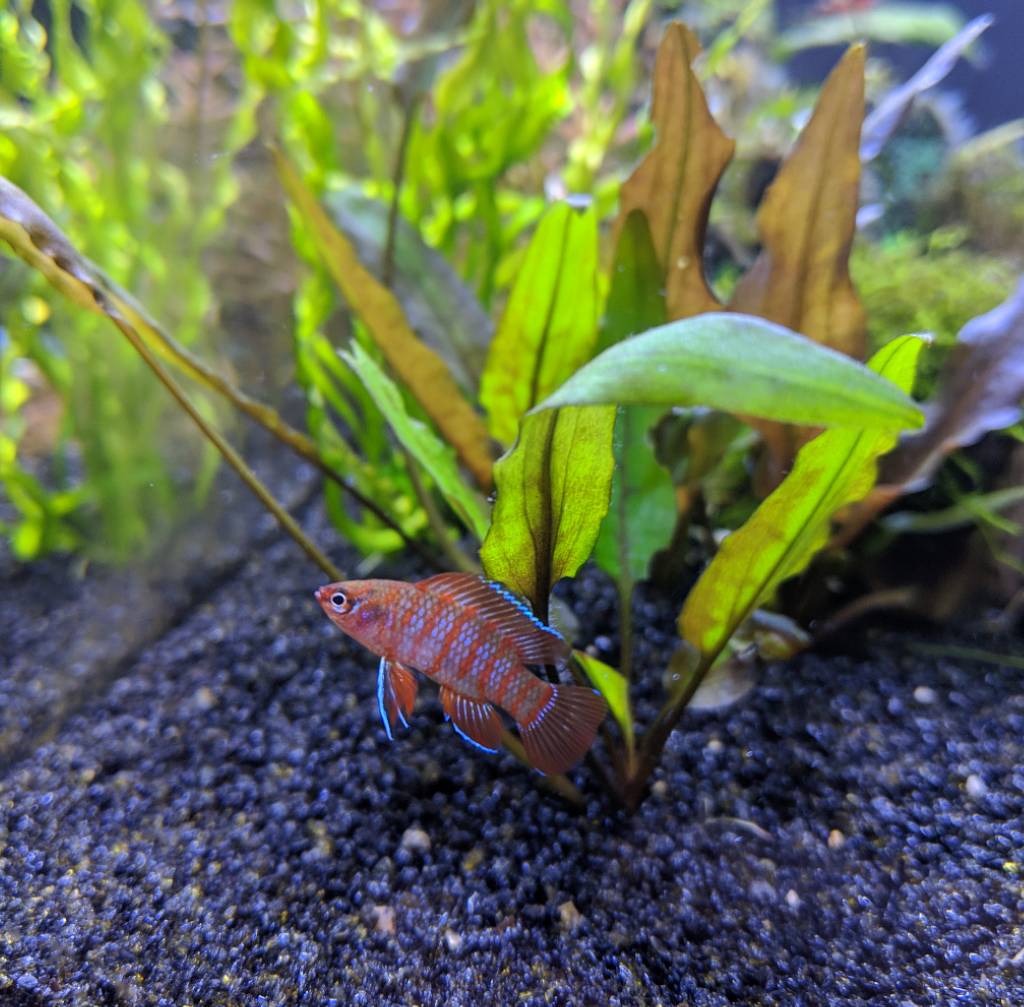 I kept collecting plants, and the tank started to get crowded. It was a dream as far as maintenance though, just a weekly water change and a little easy green every day. 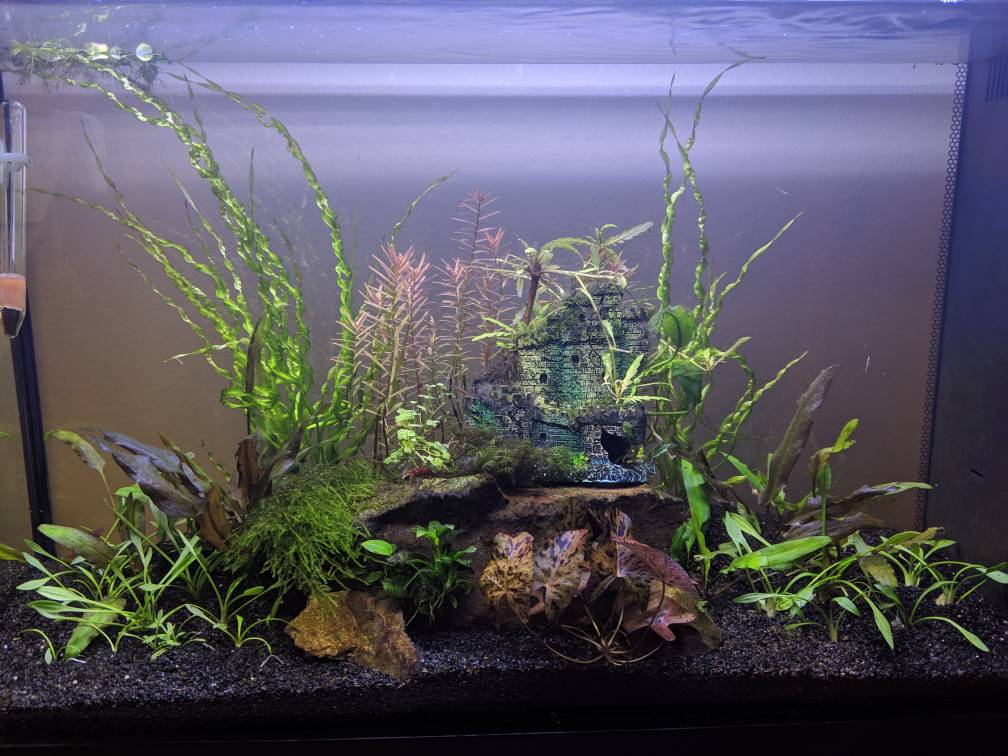 After my girlfriend moved to a different company, I decided to replace the castle with some spider wood. As you can see, the plant mass is pretty crazy. By this point I had moved the scarlet badis home to give him a bigger hunting ground, so there were only shrimp in the tank.

I realized all I really wanted to do was grow plants, and the island was taking up a lot of substrate space. So I removed all the hardscape and went full Dutch. I also added a betta since the coworkers thought I was weird for having a shrimp only tank... 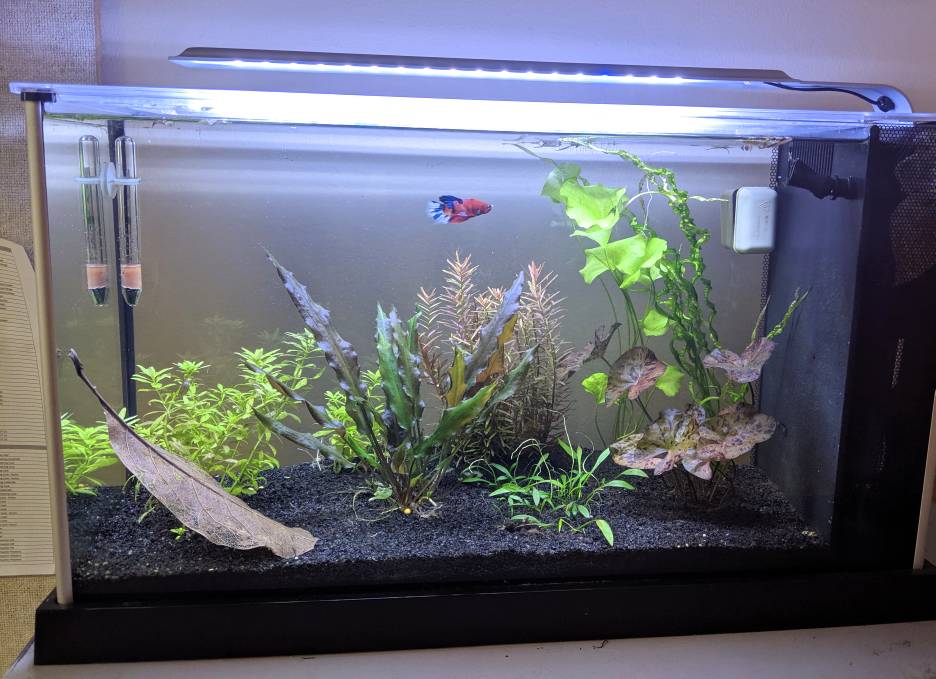 I had someone else do a water change while I was out of town, and it stirred up the substrate pretty badly. The plants didn't seem to mind, but the tank just looked very dirty. 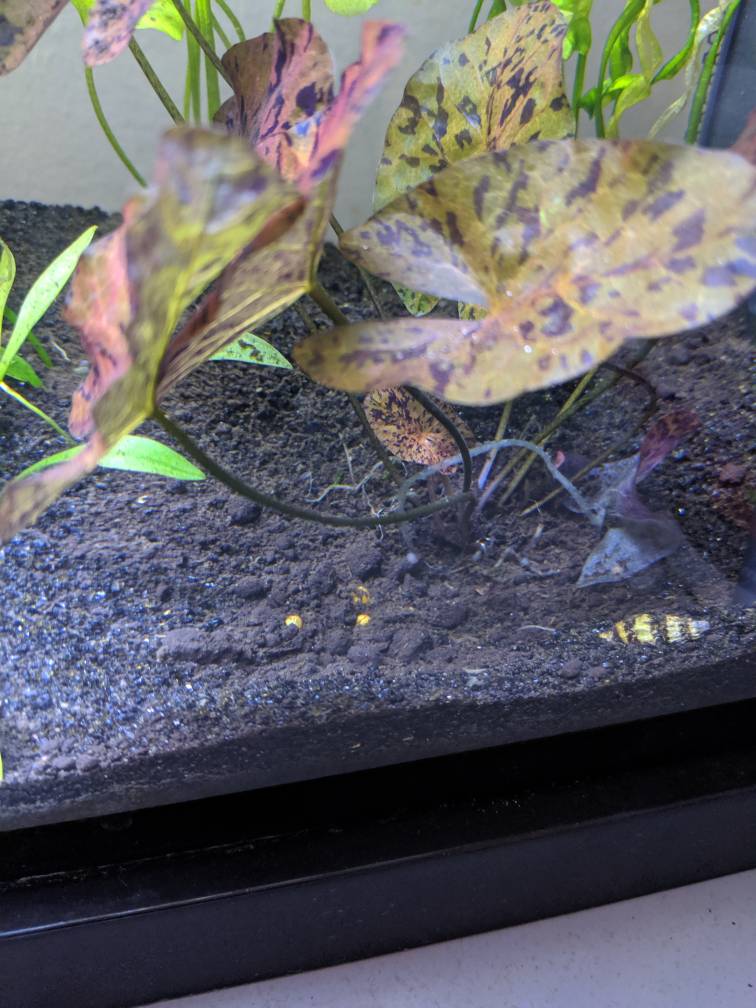 In order to make sure I could continue uprooting plants without pulling up a bunch of dirt, I gave it a thorough vacuuming and added another 1/4" of BDBS today. All the plants were trimmed and replanted, and hopefully they'll be looking good again in about a month!

The goal right now is to do a Dutch tank like someone in the '80s might have. I think it's a lot easier to comprehend what's going on in a low tech tank, where in a high light, high tech tank you might get a sudden algae bloom, or have one plant stunt, and have no idea why.

This journal will most likely be infrequently updated, and is as more for me than the reader. So forgive me if I ramble on and don't proofread, and thanks for checking it out! 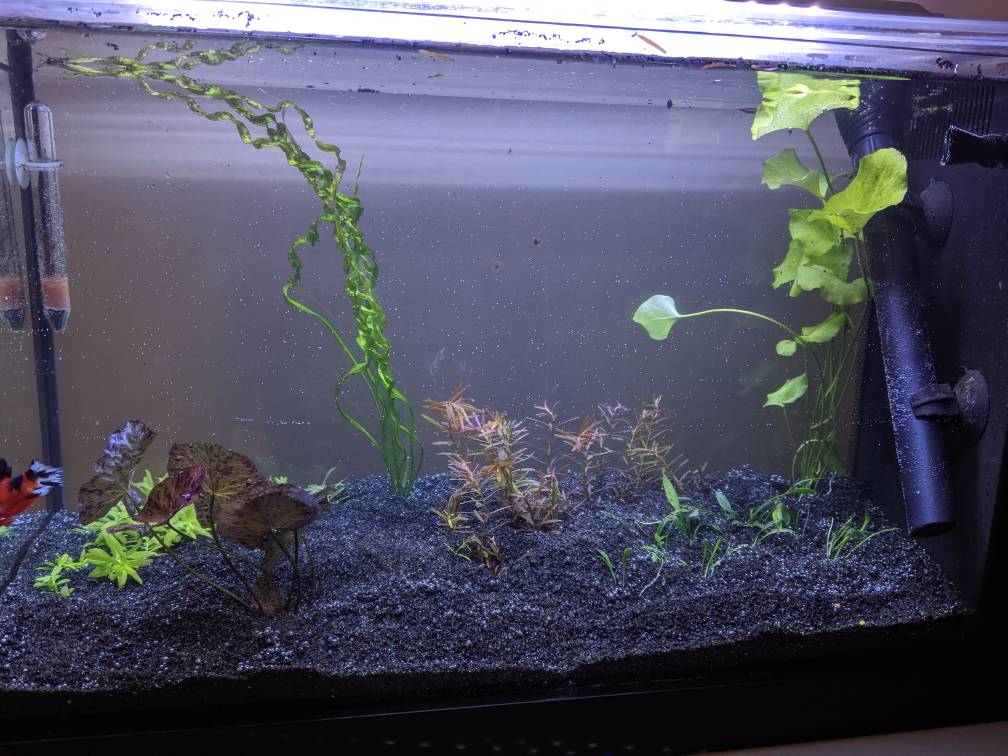 (View User Tanks)
PTrader: (0/0%)
Join Date: Dec 2018
Posts: 95
After the rescape things have not been going perfectly. I had to aggressively trim the Vesuvius sword and Nymphoides Taiwan as they were struggling, but the sword is already bouncing back.

The tank had GDA and brown diatom algae, which I assume is due to disturbing things when I did the rescape. I'm going to bring in a nerite to do some cleanup on the plants. You can see the diatom algae on the Limnophila aromatica "mini" here, it should be a bright lime green: 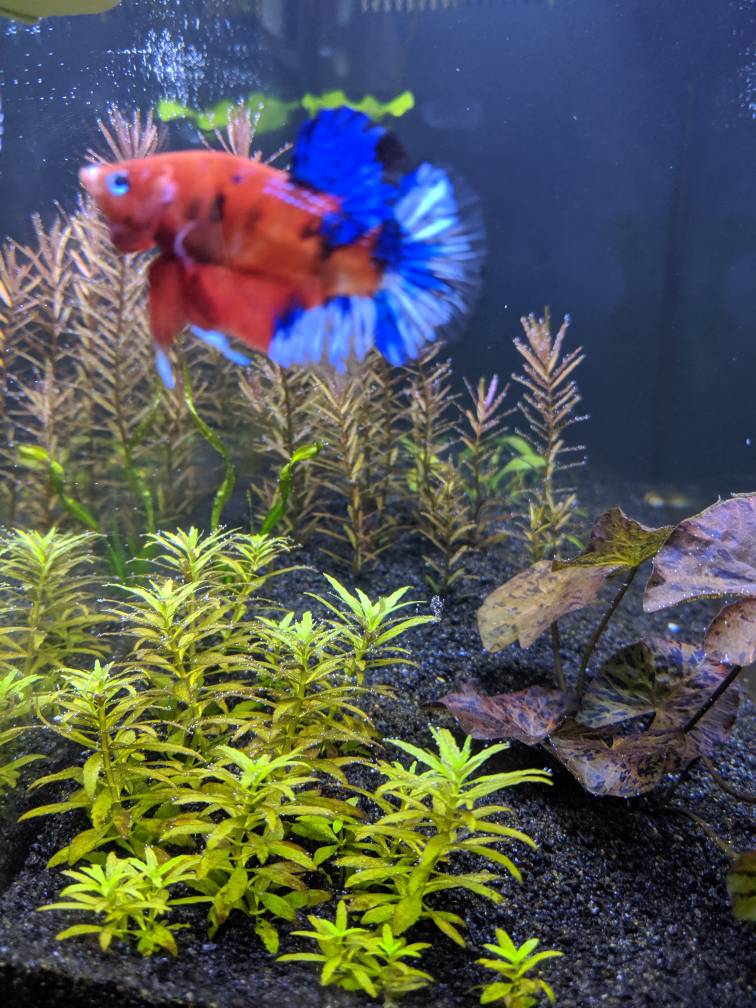 Everything continues to grow in. I'm considering going with staurogyne repens rather than crypt parva as I'm not sure I want to wait another year for it to mature. 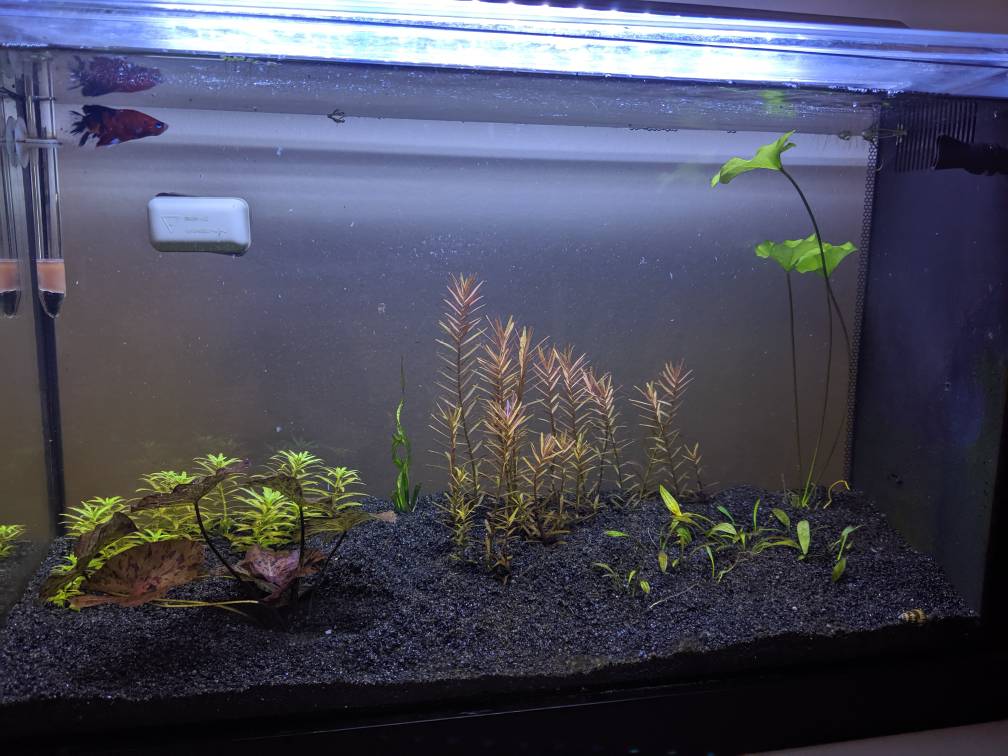 (View User Tanks)
PTrader: (0/0%)
Join Date: Dec 2018
Posts: 95
I fought the brown algae for another month, but every Monday I would come in and it would be back. The plants just weren't healthy enough to fight it anymore. Yesterday I pulled all the plants, did a thorough cleaning, and replanted with some healthy plants I had on hand. I also added CO2, just so I could eliminate that as a potential cause of the algae.

I think in the last rescape, when I added the layer of BDBS it prevented the roots from reaching the soil layer so the plants were not getting adequate nutrition. I'm going to keep maintenance up heavily for the first few weeks with these plants and see if they take off, if not it's time to replace the substrate with Amazonia. First three are the algae problem, last is the new setup. 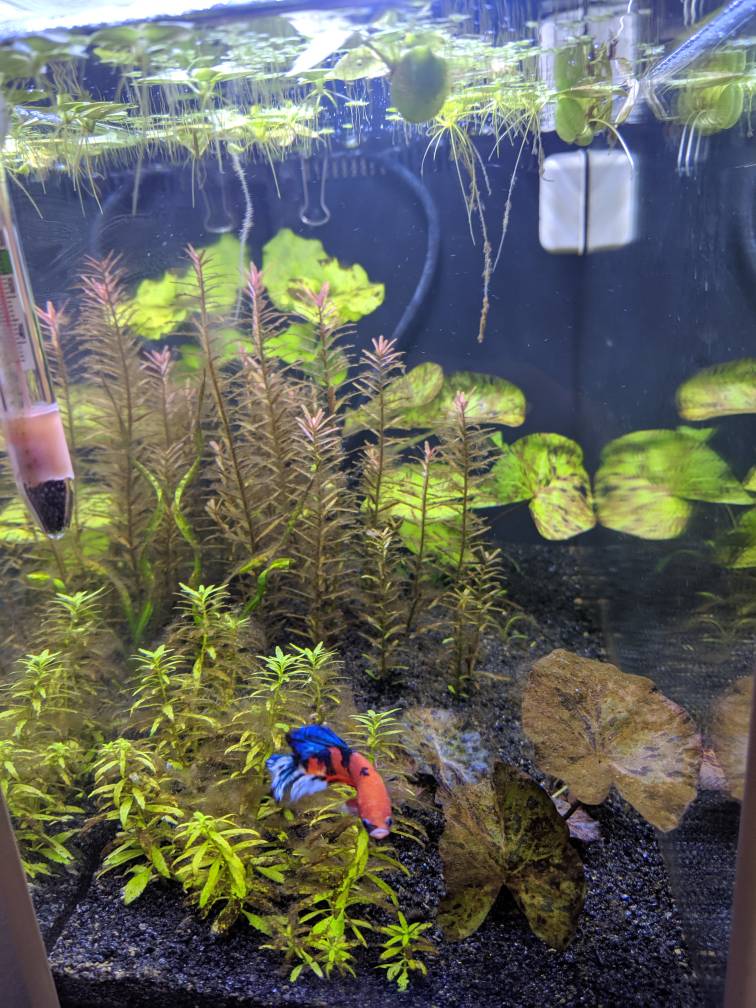 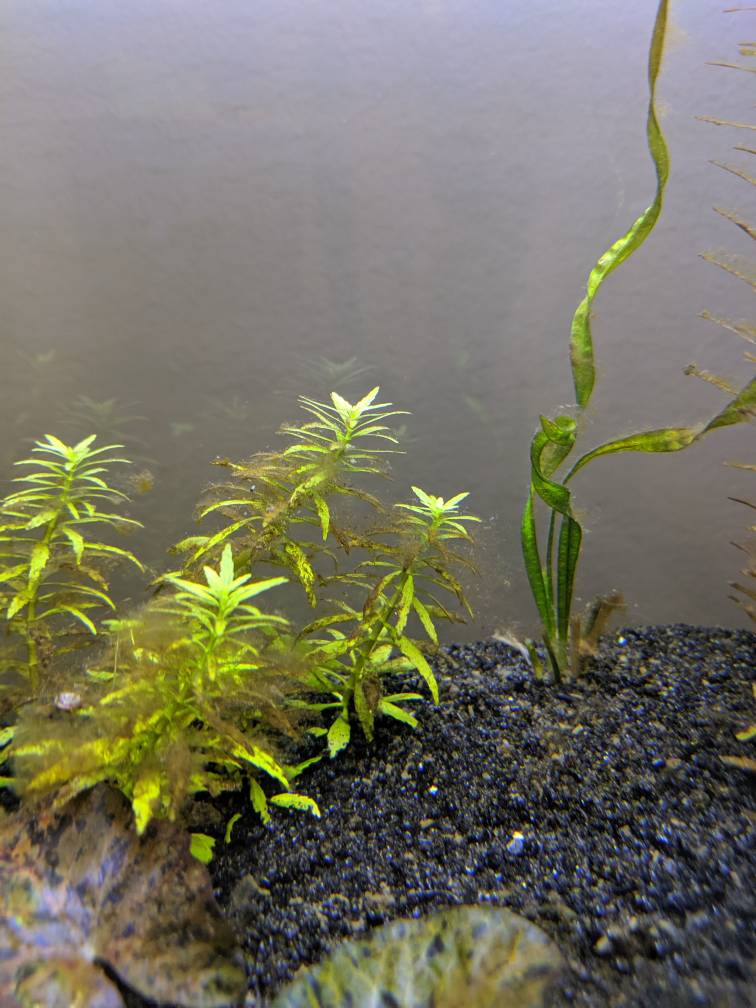 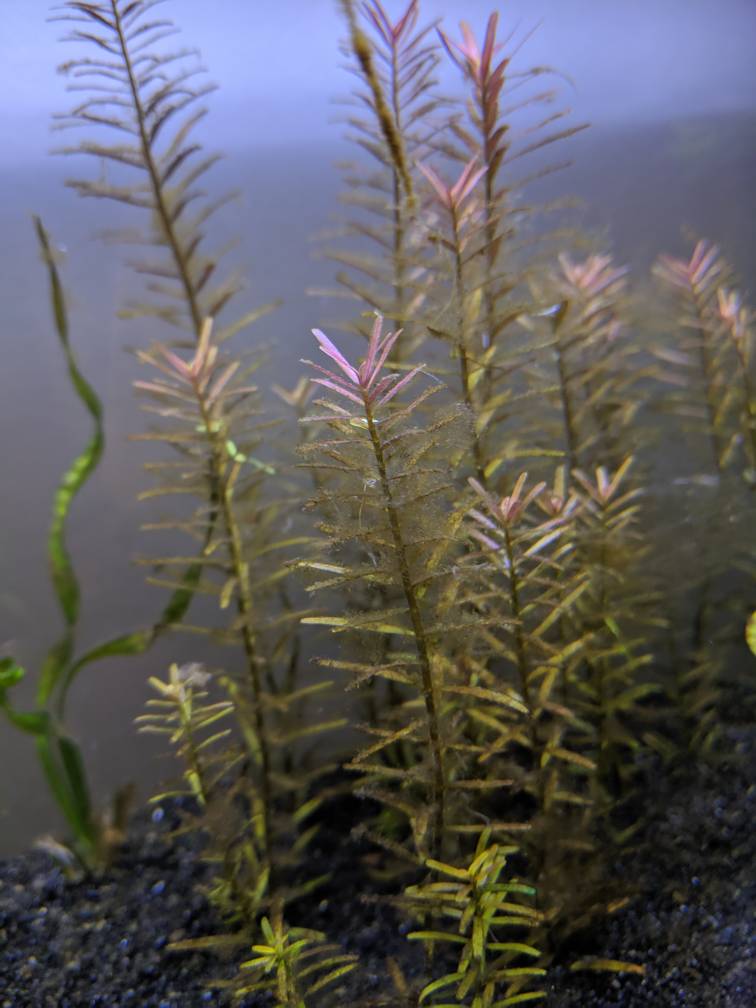 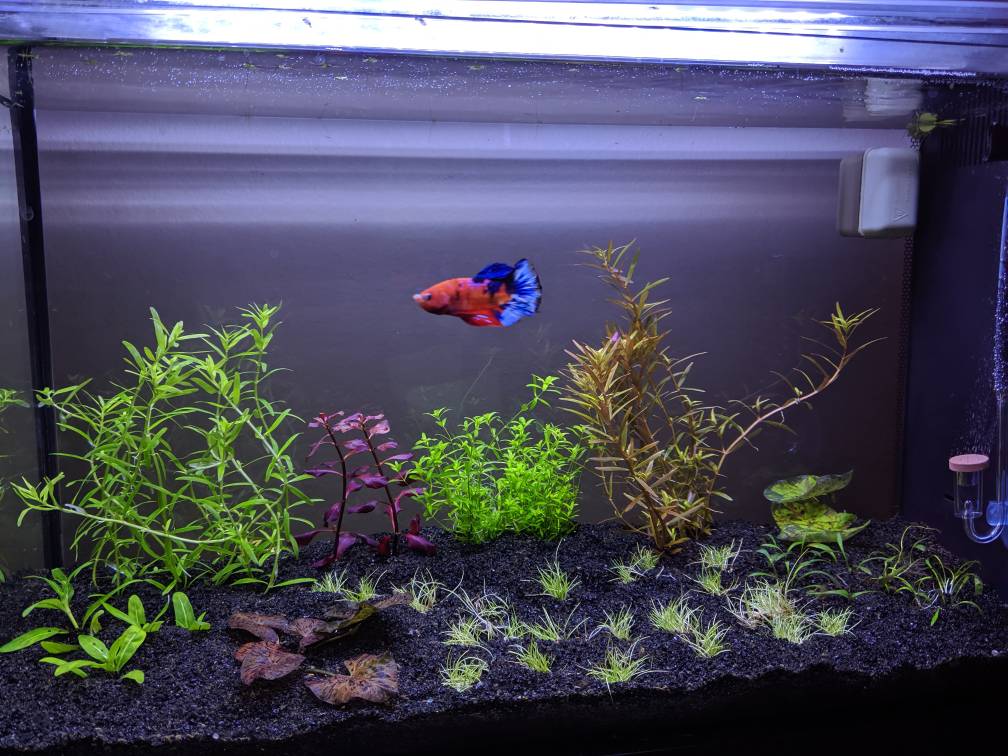