(View User Tanks)
PTrader: (0/0%)
Join Date: Dec 2017
Location: a small NYC studio
Posts: 2
no filter Walstad 5.5 gal - criticism wanted!
I'm excited to share with you my Walstad style 5.5 gal tank that began early October 2017. After being inspired by watching a video of a no filter aquarium on youtube I eagerly dived into the hobby wanting to get set up as fast as possible whilst having no prior experience with aqauriums. I went on craigslist, purchased a bundle of random plants and from what I have identified, the tank began with

java moss
udwigia repens
blyxa japonica
java ferns
Brazilian elodea
What other plants were in this bundle (see photo below)?

After acquiring the plants I set up my 1 inch of organic soil at the bottom and a substrate cap of 1.5 inches (perhaps the substrate is too thick?). I purchased driftwood, frogtbit and salvinia let the tank sit for weeks under a 5000k lamp until adding 3 RCS and 1 horned nerite. I had an old heater lying around and added it to the back. I did weekly bi water changes and never had issues with turbidity as I made sure to disturb the substrate as least as possible.

Here's what it looked like for a few weeks whilst the plants were getting established. 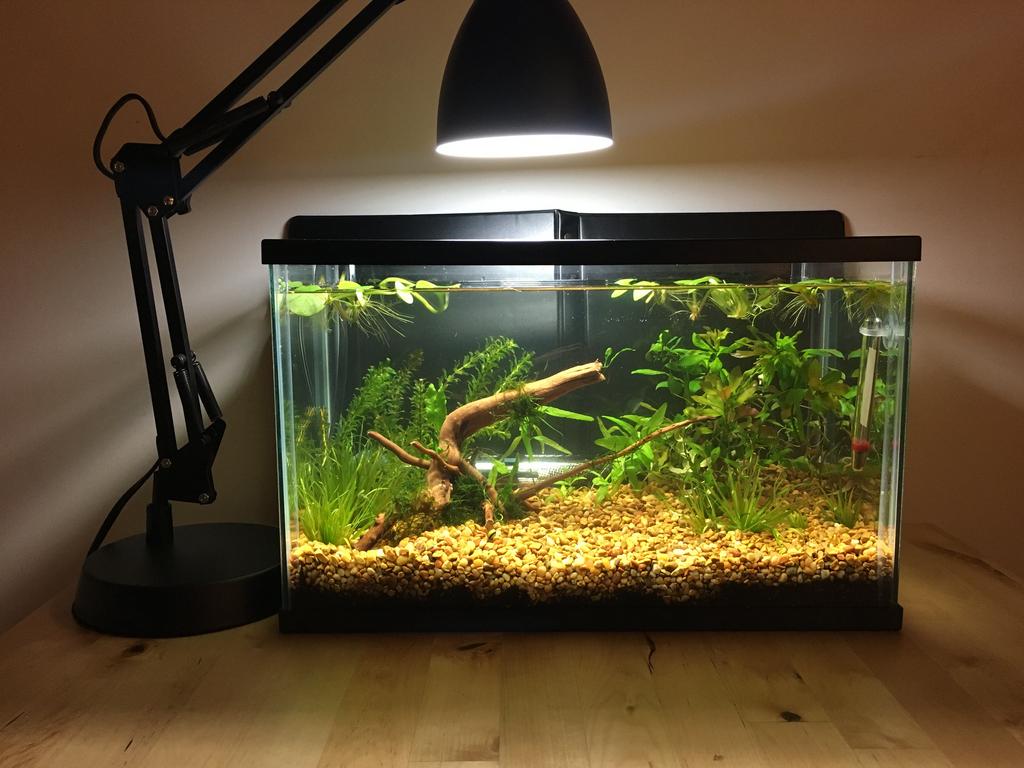 Added livestock where you can see one shrimp and the horned nerite near the bottom right wood. 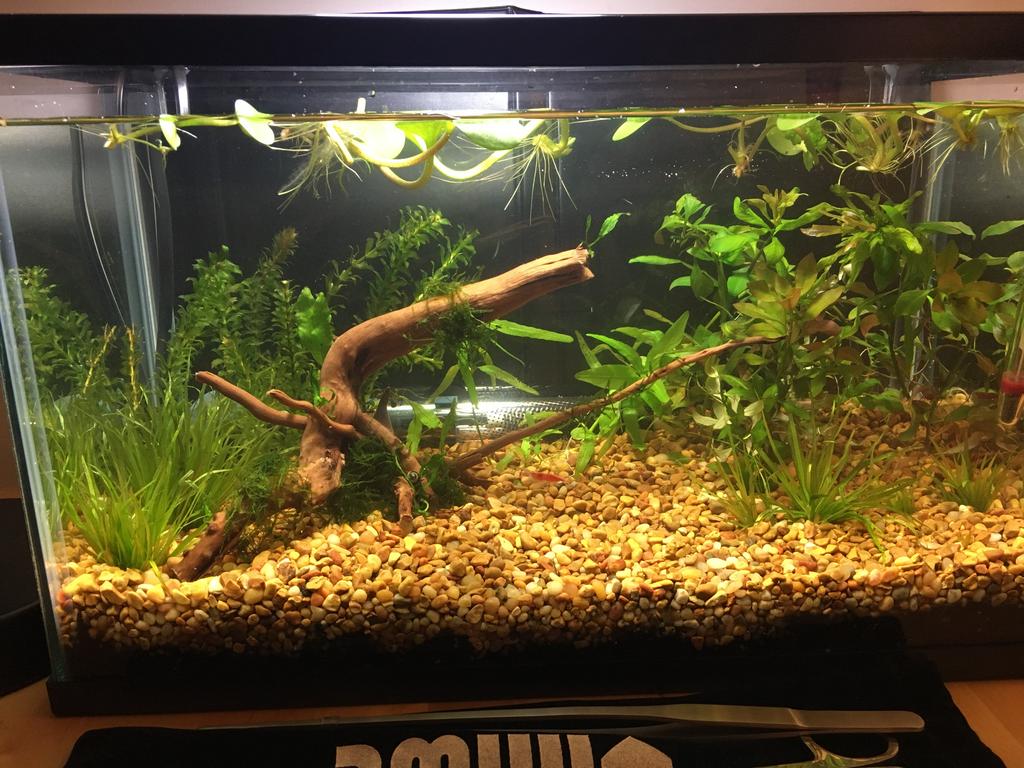 At the end of November (tank is a month old) the horned nerite and one of the RCS didn't survive so I decided to replace with a juvenile betta bought from a major pet store and somehow a guppy frye snuck in.

Here's where I'm looking for criticism and help... I now do 40% weekly water changes and added a cover to the tank to help limit evaporation and maintain heat during the winter. My tank normally runs at 78-80F but during the winter I've noticed the range has increased to 80-82. This may be due to my heater which is uncovered, old, and too large for this size tank (can go up to 100W). The plants have grown in nicely but they are budding aerial roots which is slightly unappealing. The java moss kept falling off the driftwood so I used bonsai wire to pin it to the wood and floor (to create a mat). Because of the central lighting and the uneven spread of light the plants have been pulled the the center of the tank so a different method of lighting may be more beneficial. I added a red variety plant which has started to revert to green on the tips as well as some long grass type (both from petco).
The baby betta is very active and is constantly rubbing on the glass. He's fed fluval bug bites typically twice a day a small pinch of bug bites or until I see his belly bulge slightly. The 2 RCS still in the tank are grazing all day, however they're not terribly lively. I do have pest snails (trumpet and ramshorn) but they are minimal and they assist with the algae control. I've never had too much issue with algae, but I did have a problem with hydra and planaria which was resolved with safeguard. 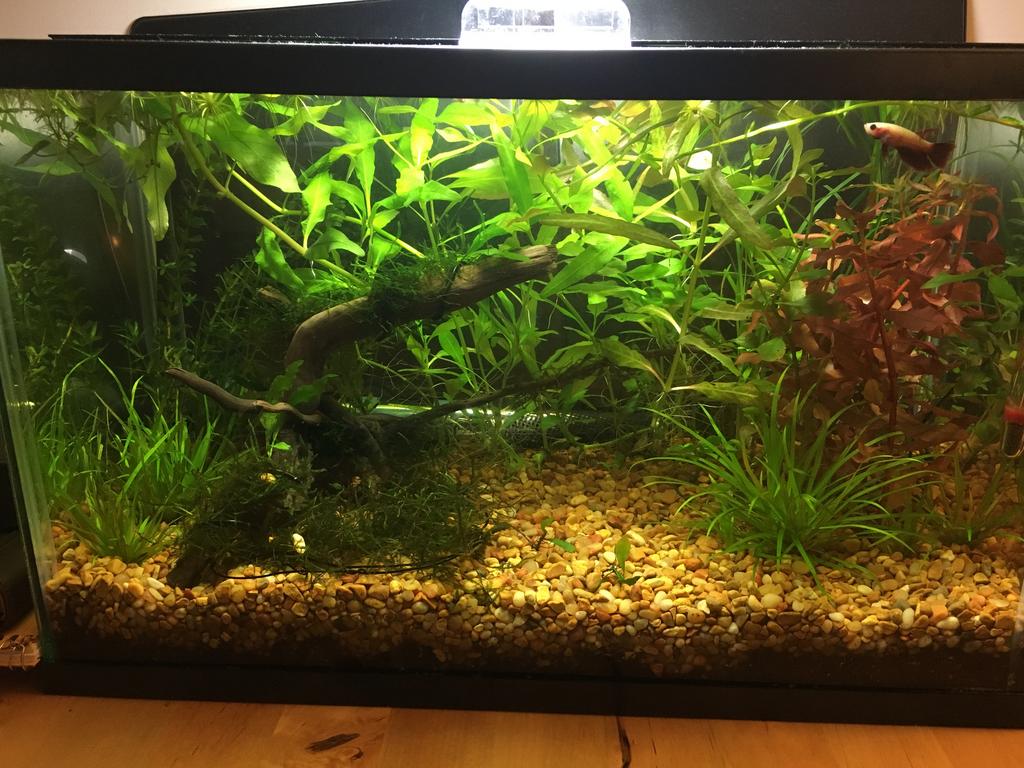 (View User Tanks)
PTrader: (33/100%)
Join Date: Jun 2014
Location: Edison, New Jersey
Posts: 1,571
I like it! I used to have that sort of gravel until things under it just, well, rotted. I even added root tabs. I'll stick with sand for now!
To view links or images in signatures your post count must be 10 or greater. You currently have 0 posts.
20 Gallon jungle tank
2.8 Gallon Fluval Spec