(View User Tanks)
PTrader: (0/0%)
Join Date: Aug 2016
Location: TX
Posts: 25
fish deaths inside DIY shrimp trap
I used a regular 500mL plastic water bottle to make a DIY shrimp trap - that is, cutting off the top 1/3 of the bottle, invert and lay it on top of the remaining 2/3. I put some shrimp food inside the bottle to lure the shrimp inside.


I returned after 3 hours and found the DIY shrimp trap full of shrimp, as expected. To my horror, there were also inside the trap 2 otos, 6 pygmy cories, and 1 chili rasbora - all laid belly up, all dead!

No shrimp was dead. The remaining cories and rasboras outside the trap were alive and healthy.


I have used this type of DIY shrimp trap before without any fish getting trapped inside, so never experienced this kind of catastrophic event. I could not come up with a good reason: I guess the fish died from a lack of oxygen inside the bottle because they were crammed with ~ 50 juvie red cherry shrimp inside a water bottle; there was also the unconsumed food, the wastes from shrimp and fish, and the CO2 expelled from their mouths. But 3 hours seemed really short for them to run out of oxygen, especially considering that the bottle was open to the water column of 20G tank.


I wonder if anyone else had similar experience and possibly better explanation for fish deaths inside a shrimp trap.
milingmiles is offline
Quote Quick Reply
post #2 of 11 (permalink) Old 05-14-2017, 07:14 AM
PierreSchoon
Algae Grower

(View User Tanks)
PTrader: (0/0%)
Join Date: Feb 2017
Location: Pretoria, South Africa
Posts: 50
I think that stress might have caused the deaths here. Being trapped inside the bottle got them spooked. I know cories can give of a deadly toxin when stressed, reason why breaders pack them indevidually when shipping, which might have poisoned the fish. Not sure if this is toxic to fish though.

(View User Tanks)
PTrader: (3/100%)
Join Date: Sep 2014
Location: Virginia, USA
Posts: 2,811
Make some holes in the sides of your bottle trap for water to flow through, then it won't happen again. Some of my fish are shy so if I need to catch them set the trap at night. With holes and water flow, they are fine in the morning- stressed, but alive.
JJ09 is online now
Quote Quick Reply
post #4 of 11 (permalink) Old 05-14-2017, 03:51 PM
Krispyplants
Planted Tank Enthusiast

Quotes:
"All species in the genus Corydoras exude a white milky substance from below the gill area, possibly connected to the pectoral spine. This substance is extremely toxic to all fish, and kills within minutes. The release of the substance is triggered by severe stress, such as often occurs during netting and capture. Mr. Fuller includes a photograph in the article of this substance on a C. sterbai, and he notes that it is the only existing record as far as he is aware. In the confines of a bag of water, the substance kills the cory quickly. Small bubbles will appear at the water surface, and if the cory is taken out of the bag of water immediately and placed in fresh water, it may recover."

I didn't check their gills for white milky substance or look for small bubbles on water surface. But this explanation sounds more convincing than the lack of O2

@JJ09: Did you have Cories in your tank? If PierreSchoon and Mr Fuller were right, this phenomenon may only affect the genus Corydoras. If the holes are too small, flow may not be strong enough to remove the toxins; it holes are too big, the juvie shrimp will just escape from the trap. Pretty tricky to decide the size of holes.

(View User Tanks)
PTrader: (3/100%)
Join Date: Sep 2014
Location: Virginia, USA
Posts: 2,811
no, I don't have Cories or juvenile shrimp, so I don't know how small the holes would have to be. I made mine with the heated end of a sauterung iron, done it before with a point of a nail or knife heated in candle flame, too- smaller nail for smaller hole. I feel like I overdid it on holes in my trap, to be honest. Pic: 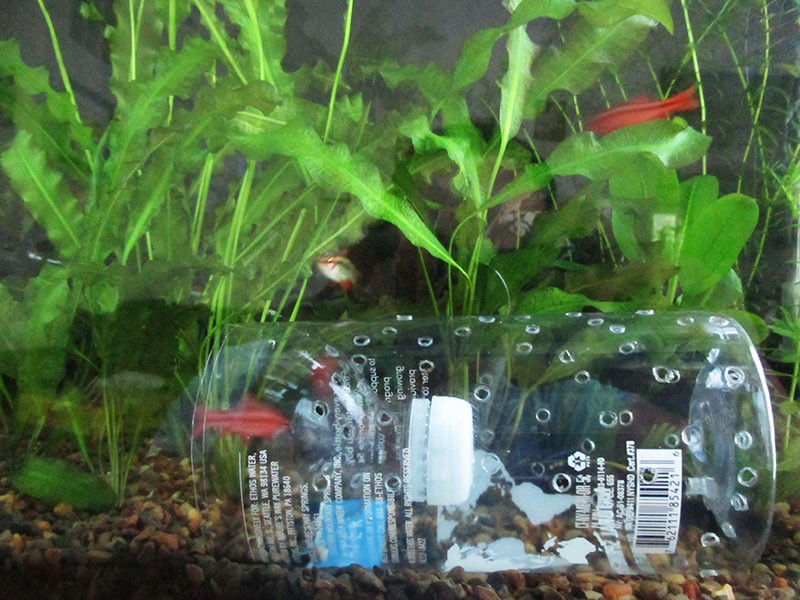 (View User Tanks)
PTrader: (3/100%)
Join Date: Sep 2014
Location: Virginia, USA
Posts: 2,811
Forgot to mention earlier- see how my bottle trap has the original lid on it? I made a small hole in the cap that just my kuhli loaches can fit through, so I can catch them and exclude the fish. If I want to catch everyone, I take the cap off. So you can make a small entrance hole just for your little shrimps, and keep the cories and other fish out. 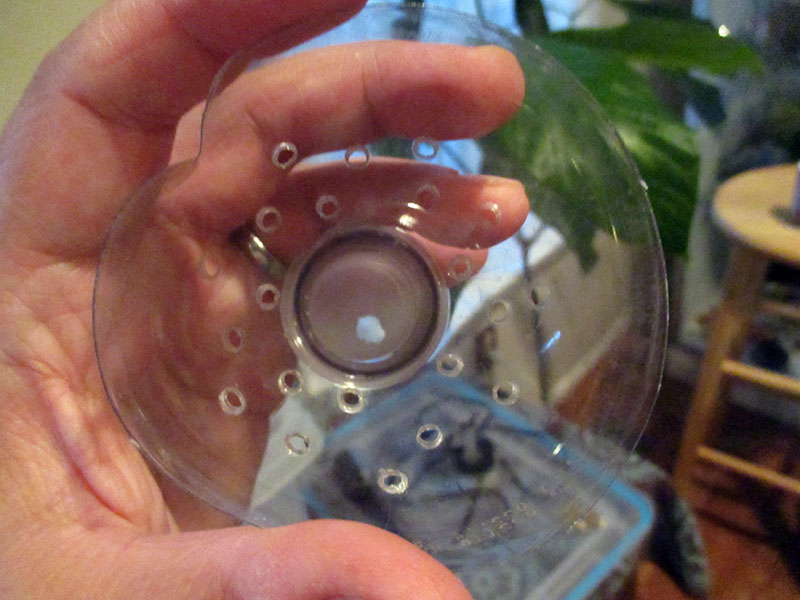