(View User Tanks)
PTrader: (0/0%)
Join Date: Oct 2016
Location: 77072
Posts: 8
where did you print or build this board from file PCB
Quote:
Originally Posted by diztly View Post
thanks mr.man
this my board with mr.man schematic, but uln 2003 ic not fit inboard feet to small, but is ok.

(View User Tanks)
PTrader: (0/0%)
Join Date: Jul 2003
Posts: 82
Don't know if anyone is interested, but I am clearing out a ton of IoT related stuff that would be useful for anyone doing a DIY Aquarium Controller.

Atlas-Scientific stuff and an absolute ton of Arduino Stuff in two separate auctions.. It just seems wrong not to point it out to the DIYs here building their own aquarium controllers... So you will have to send me PMs to ask about the auctions as it is against policy to include the links here..

So there are two auctions of interest:

The first is for all of the Automation and Controls / Internet of Things:

The second auction is for all of my Atlas-Scientific Water Quality instruments / sensors / transmitters:

I hope someone is able to make use of all of this great material. Maybe I’ll sell some tools too (soldering stations, electrical meters, cradles, etc…) at some point..

I'm building my own controller using a RaspberryPi4, Node-RED, and Atlas-Scientific i2c Sensors and NCD i2c Expansion boards... so yeah.. I don't need the stuff above. I'll post a separate thread about this thing shortly... It's just in it's infancy... But above is a link to the Gallery here where I have a snap shot from a few days ago of it's quick and dirty Node-RED dashboard on the small 7" PI4 screen (when I'm done, it will be run in Kiosk mode and loose all of the Chromium stuff that is taking up so much real estate).
ajmckay likes this.
Peter
learning never stops...
Last edited by FischAutoTechGarten; 04-07-2020 at 01:09 AM. Reason: added pictures
FischAutoTechGarten is offline
Quote Quick Reply
post #2134 of 2143 (permalink) Old 04-12-2020, 10:11 AM
Sokonomi
Algae Grower

(View User Tanks)
PTrader: (0/0%)
Join Date: Oct 2019
Location: Netherlands
Posts: 19
Oho, a Pi controller, was waiting for one of those to pop up!
I've been beating myself up with hard to chew arduino code,
Node-RED seems a bit more pleasant to deal with.
Hook me up with a link if you have a thread somewhere.

(View User Tanks)
PTrader: (0/0%)
Join Date: Jul 2003
Posts: 82
Quote:
Originally Posted by Sokonomi View Post
Hook me up with a link if you have a thread somewhere.

I mainly posted to show the Arduino stuff I have for sale for anyone building the iAqua (Auction closes in 5 hours, looks like I'll get $200usd for the Arduino stuff... someone's getting a great deal)....

I wont' elaborate more on my controller on this thread... I'll start another thread soon.... Just look for my User Name. For now, I have some initial code posted on a thread I started on SimplyDiscus (DIY Control - RaspberryPi4 - Raspbian - NodeRED - AtlasSci Inst - NCD ExpI/O over i2c) ...
Peter
learning never stops...
FischAutoTechGarten is offline
Quote Quick Reply
post #2136 of 2143 (permalink) Old 04-22-2020, 09:19 AM
osmancel
Newbie

(View User Tanks)
PTrader: (0/0%)
Join Date: Jul 2003
Posts: 82
Quote:
Originally Posted by Sokonomi View Post
Oho, a Pi controller, was waiting for one of those to pop up!
I've been beating myself up with hard to chew arduino code,
Node-RED seems a bit more pleasant to deal with.
Hook me up with a link if you have a thread somewhere.

Started a Controller build thread on the Node-RED forums. It's very focused on the Atlas-Scientific i2c sensors and getting data in and out. Lots of progress has been made. I'm even doing control over relays on an i2c expansion board as well... So presently no GPIO on the Raspberry Pi is being used... it's all networked sensors/devices on the i2c bus.

(View User Tanks)
PTrader: (0/0%)
Join Date: Oct 2019
Location: Netherlands
Posts: 19
I already have most of the materials for this laying around so im just gonna push through with it for the hell of it. :')

Some details about this O2Surplus board have me a little confused though.. 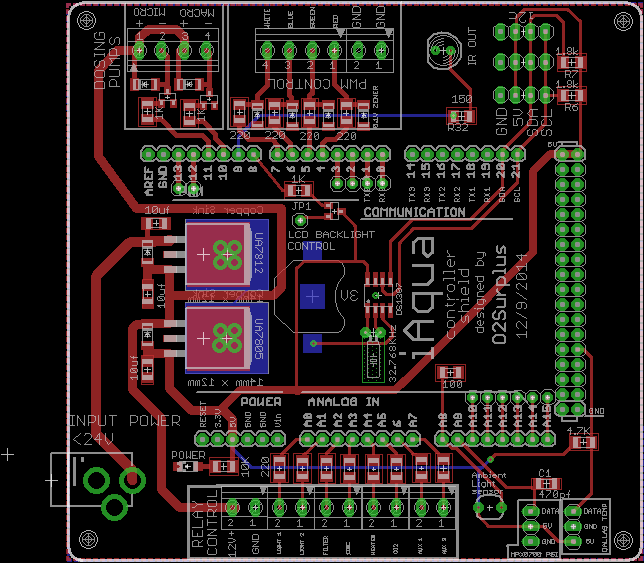 So here's the circuit. A few things struck me as a little odd about this design;

1. Why does it take 24v? Wouldn't it be easier to just omit the UA7812 and run the whole thing on a single 12v powersource along with the arduino mega? Personally I'm thinking I will just leave that regulator off, jump the legs and run a wire to the arduinos VIn pin. That way I can just feed it 12v and let the power aggregate from the shield to everything else. Only one powerjack needed, and one less heatsource. Would there be any reasons not to do this?

2. Which leads me to the second thing I found odd; Why is the shield feeding power to the arduino 5V pin? If this is intended to bypass the arduinos 5v regulator and power the board, isn't this generally considered a bad idea?

PWM was designed to run either Meanwell LDD's or his own drivers.
sooo sure using digital MOSFETs is prob fine.
Strips run constant voltage though and constant current drive is preferred.

(View User Tanks)
PTrader: (0/0%)
Join Date: Oct 2019
Location: Netherlands
Posts: 19
Quote:
Originally Posted by jeffkrol View Post
Think the input power is "less than (or equal)" to 24v.
max input voltage on the 5v and 12v regulator is 25v. 30v respectively.
min for 12v reg is 14.5
sooo.
Limit on the on board voltage regulator(s)
http://www.ti.com/lit/ds/symlink/ua7...=1588909844326
I know it wont let me use a 12v powersource unless I simply bypass it. So my choices are running this with 2 different power supplies, or just omitting that 12v regulator with a bypass and powering the whole thing on a single 12v. ..I presume? I do have 24v available for my lights, but for both wiring and heat generating it seems nicer not to use the 7812?

Quote:
Originally Posted by jeffkrol View Post
PWM was designed to run either Meanwell LDD's or his own drivers.
sooo sure using digital MOSFETs is prob fine.
Strips run constant voltage though and constant current drive is preferred.
What circuit is meant to go on that PWM output then?
I didn't come across it reading this thread?

Quote:
Originally Posted by jeffkrol View Post
Believe Aduinos 5V bus current is limiting..
I'm not sure what you mean by that?
The 5v on the shield should not connect to the 5v on the ardruino I think?
The shield 5v is meant to replace the arduino 5v?

(View User Tanks)
PTrader: (0/0%)
Join Date: Oct 2019
Location: Netherlands
Posts: 19
Well obviously the Arduino is not gonna power the tanklights all by itself, that's why you use the PWM signal to control the gate on an N-channel MOSFET, I think?

This example is for 3 channels, but its all the same. Plus ofcourse the power being drawn from an external supply (shared GND!).

I thought you had to use a servo driver board to unpack the PPM-train into individual PWM signals, because the code involves PCA9865. But apparently that's just an option, and the channel PWM signals are available on pins 2 ~7 anyway.
Last edited by Sokonomi; 05-08-2020 at 06:59 PM. Reason: incomplete.
Sokonomi is offline
Quote Quick Reply