(View User Tanks)
PTrader: (84/100%)
Join Date: Dec 2005
Location: Sacramento, CA
Posts: 21,015
Cheapest PAR Meter DIY
A PAR meter is nice to have, but, for most of us, there is no way to justify paying $350 for one, or even $150. This caused me to design and make a lot of DIY PAR meters that I sold for $50-$60 on the For Sale forum. But, even that is more than many people want to spend for something that is nice to have, but far from essential. Since I am also bored with making those PAR meters, I stopped, and decided to see just how cheaply I can make one that is usable for our planted tank purposes.

Amazon, Ebay, and a few other internet shopping sites sell Lux meters from China, specifically the LX1010B model, which looks like a PAR meter, and does exactly the same thing, but reads out in Lux units instead of PAR units, and is not waterproof, so it can't be dunked in an aquarium. But, it is cheap - as cheap as $13.50 on Ebay, but rarely more than $15, with shipping included in the price. That should be affordable for almost anyone with a planted tank.

The really ghetto way to make one of these Lux meters work as a non-waterproof PAR meter is simply use filters to adjust the sensitivity of the photodiode it uses, so the readout will be the same as a PAR meter.

This is the LX1010B Lux Meter (Don't even think of using the ones that are red, and that have the most listings on Ebay - I have not been able to make one of them work for this.)

If you remove the two screws on the back of the sensor module, you get this:

The little green glass square is the built-in filter that makes the photodiode read out in Lux units. The spectral response of this diode/filter combination is essentially green light, around 550 nm wave length. The numbers it gives on the read-out module are about 60-80 times as much as the equivalent PAR numbers. To shift the spectral response a bit away from green and make it a little bit wider in response you can use Rosco gel filters: http://www.rosco.com/filters/roscolux.cfm If you have a local dealer for Rosco filters you can get a free sample book of almost all of their filters, in roughly 1 1/2" x 3 1/4" pieces. Or, you can often buy a sample book on Ebay at a reasonable price. Using a Rosco #4730 Magenta and a #98 Grey, taped over the opening to the photodiode, makes the readings very close to those a PAR meter would give.

The spectral response of this "ghetto PAR meter" is:

The green curve is the basic Lux Meter response, and the pink line is the response with the filters. You can see this doesn't even come close to matching the response of the Apogee Quantum PAR meter, the black curve, but, as long as you use it just for typical fluorescent or LED aquarium lights, it is reasonably accurate. It reads "PAR" with the range selector on the meter read-out set at the middle, 20,000 range.
The calibration of the meter, compared to a Quantum meter is:

There is no way to improve the spectral response if the original photodiode is used, but that little diode is almost identical to an easy to obtain Excelitas VTB8441BH photodiode. 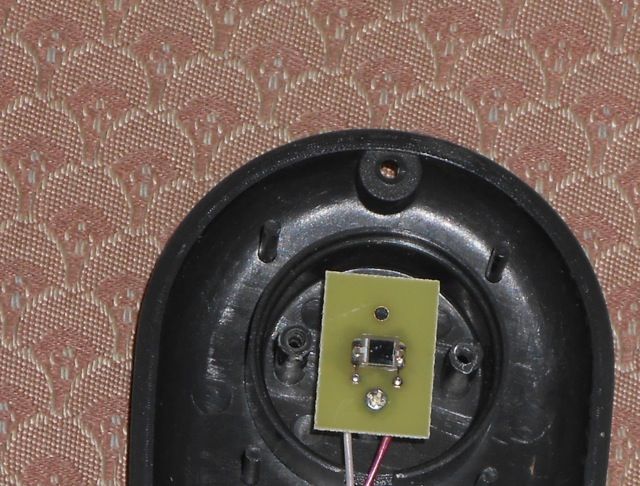 Remove the two screws that hold the green filter and cap on the sensor, and you see this. Remove the one screw holding the diode circuit board and you get this:

The Excelitas diode has the same lead spacing and size, so you can remove the original diode, melting the solder and/or cutting the leads next to the board, and prying it out. Now, you can put the Excelitas diode in its place and solder the cable wires to the leads - red wire to the side marked with a "+" on top of the diode.

Now, you have a "Lux" meter with a diode having a wider spectral response, which can be modified with filters to make it come closer to the Quantum PAR meter response.

That is the combination giving the spectral response shown above. And, this also requires the read-out module be set to the middle range, 20,000.


(View User Tanks)
PTrader: (84/100%)
Join Date: Dec 2005
Location: Sacramento, CA
Posts: 21,015
Waterproofing something like this requires more than a plastic bag. I made one attempt to water proof a sensor by using my old reliable WeldOn #16 acrylic cement. That worked perfectly to seal the white diffuser dome to the dark grey sensor housing. I just put a bead of the cement on the housing groove and pressed the diffuser dome in it, and held it for a minute to set up. But, when I tried the same thing for the two halves of the readout grey housing, it leaked badly when I tested it in a glass of water. That was because there is a notch at the dome end, where it is hard to get enough cement in to close up the notch. I think my next try will be with silicone for that joint. Using silicone can result in a very sloppy looking job, so I haven't decided yet how to avoid that. The hole where the electric cable enters the housing, which is really a notch in each of the housing halves, should probably also be sealed with silicone. The only remaining "holes" are the places where the two halves are held together with two screws. It looks like WeldOn #16 would work fine there.
Hoppy
Hoppy is offline
Quote Quick Reply
post #4 of 65 (permalink) Old 12-24-2013, 11:14 PM
Corrie
Algae Grower


(View User Tanks)
PTrader: (84/100%)
Join Date: Dec 2005
Location: Sacramento, CA
Posts: 21,015
No buttons to operate except the on-off-hold switch, which you only use to turn it on before sticking it in the water. The problem would be the trapped air in the bag would make it hard to push it down to the substrate, and your hands and arms would interfere with the light. Sealing the sensor would only be hard once, not every time you try to use it.
Hoppy
Hoppy is offline
Quote Quick Reply
post #6 of 65 (permalink) Old 12-25-2013, 01:53 PM
Corrie
Algae Grower


(View User Tanks)
PTrader: (84/100%)
Join Date: Dec 2005
Location: Sacramento, CA
Posts: 21,015
The Starbrite stuff looks like a winner! I can get it at the local hardware store in one ounce size - a little costly at about $7, but every visit to a hardware store is now costly. I still like the acrylic cement for sealing the diffuser dome to the housing, since it is clear, but this should work well for the rest of the sealing. Maybe tomorrow I will get some to try.
Hoppy
Hoppy is offline
Quote Quick Reply
post #8 of 65 (permalink) Old 12-25-2013, 04:15 PM
Corrie
Algae Grower

I worry about the chemicals in those products being fish safe. Here is a link to some black silicone aquarium adhesive. This one is only 3oz, but it can be had in a larger squeeze tube, and in a caulk tube. Source is Big Al's Online. Very few aquarium sources carry the black, or if they do, you must buy a box of 12 or 24 tubes.

I worry about the chemicals in those products being fish safe. Here is a link to some black silicone aquarium adhesive. This one is only 3oz, but it can be had in a larger squeeze tube, and in a caulk tube. Source is Big Al's Online. Very few aquarium sources carry the black, or if they do, you must buy a box of 12 or 24 tubes.

http://www.bigalspets.com/black-sili...bber-3-oz.html
As far as I know, the only cured plastic substances that are harmful to the occupants of an aquarium are those containing mildew inhibitors. Those are designed to allow a chemical to "leach" out after they are cured. The others are just solid plastic of some form once they cure. But, of course, one would have to check the ingredients or msds for whatever substance was in question to be sure. The other significant fact is that a PAR meter will be in the tank water for only a few seconds, not for hours on end, and leaching takes time.
Hoppy
Hoppy is offline
Quote Quick Reply
post #14 of 65 (permalink) Old 12-28-2013, 04:07 PM
jeffdenney
Planted Member

(View User Tanks)
PTrader: (0/0%)
Join Date: Jun 2013
Location: always dosing
Posts: 288
Is this a new and improved diy par meter?? I own one of your older ones with the different filter housing. Does that read the same as this model??

Like filter wise is it the same and will it read the same spectrum? I never saw any graphs with the older model.
jeffdenney is offline
Quote Quick Reply
post #15 of 65 (permalink) Old 12-28-2013, 04:41 PM Thread Starter
Hoppy
Planted Tank Guru


(View User Tanks)
PTrader: (84/100%)
Join Date: Dec 2005
Location: Sacramento, CA
Posts: 21,015
Quote:
Originally Posted by jeffdenney View Post
Is this a new and improved diy par meter?? I own one of your older ones with the different filter housing. Does that read the same as this model??

Like filter wise is it the same and will it read the same spectrum? I never saw any graphs with the older model.
As I said, my goal is to find a less expensive way to make a usable PAR meter. That starts with using one of the LX1010B lux meters, but with the fewest added parts, and least labor, to keep the costs down. One approach is to use the photodiode that is standard with the lux meter - that is the cheapest approach. But, that gives you a meter that basically measures the intensity of the green light in the spectrum, which can give you an accurate PAR reading as long as you don't try to use it to compare different types of lighting - it requires that each light you use it with have about the same percent of its spectrum in the green area, so measuring just the green light gives a reading proportional to the PAR for that light.

The other approach is to replace the luxmeter photodiode with the one I used on my other PAR meters, which measures a much, much larger part of the spectrum. That approach makes the meter work accurately for a lot more lighting types, and should be essentially as accurate as the other PAR meters I made, but it also costs more to make.

I'm still thinking about whether I want to make these to sell, and if I do, which version I would want to make.

And, I still haven't gone back to the problem of making the sensor waterproof, without spending much money.
Hoppy
Hoppy is offline
Quote Quick Reply