I bought a second hand Aqua One AquaReef 2ft cube off gumtree a few months ago which had a 2 inch cut off standpipe, original return line hole sealed and new return line drilled in back panel to the weir (with pvc tubing carrying it to the tank). As you can imagine it sounded like a constantly flushing toilet so I started a crash course on sumps and due to my general inexperience decided on a durso instead of removing the silicon in the bottom return hole and trying for a herbie.

After lots of googling I discovered I have an AquaReef 275 and the replacement pipe set is $150. Ouch. My local hardware guy did interpretive plumbing to help me rig up a mini durso out of 40ml plumbing parts (we cut 20ml off the t fitting and elbow to allow it to fit in weir next to modified return hose) and I've connected it to the original standpipe with a flexible pvc sewage coupling (secured by metal washers top and back) for around $20. Win! Except I need advice.

First up, the initial standpipe I put in was cut too small, so the weir was only half full and still noisy. I got a longer piece this morning, removed water from the sump and pulled the first standpipe extension off, which dumped half the weir down the original standpipe to the sump below. Then replaced with longer extension and refilled weir. With the extra water in the weir the blue union under the tank (not bulkhead) developed a leak from its top and about half the weir's water level dropped, most going down standpipe, some leaking out the union. Definitely not the bulkhead itself, so I'm wondering if the dump of water from the weir just caused a temporary leak? I've fiddled with it (although it felt tight to me) refilled weir, turned pump on and it's not leaking now but is there anything I should do here? Also, noob question, do they tighten to the right? The original owner has used duct tape, I should probably try put a ball valve there shouldn't I? Any advice on how to do that without paying Aqua One a fortune? The pipes are smaller than 40mm and custom sized (of course). 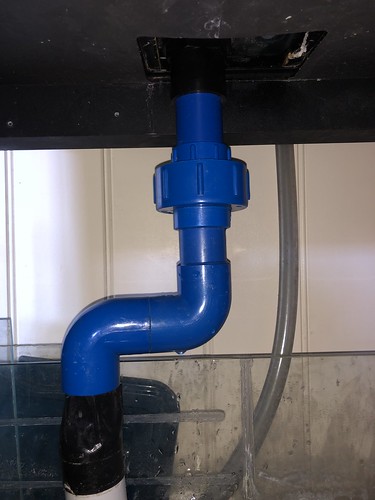 Secondly, I couldn't really measure down the weir very well so had to guesstimate the length of the standpipe. I thought it was just about right, but am now worried it's too high. The elbow sits at least 1 inch below the weir combs but when pump is on even lowest setting the flow brings it higher than I thought. Is this OK or am I running flood risk? I really, REALLY don't want to have to remove it again to cut it off but will figure it out if I'm being stupid. As the pics show I also adapted the durso design slightly to use a flat cap joined with a 40ml pipe offcut to seal off the t-fitting instead of a cap as it fit better, this reduces the air pocket above the water flow, is this also a flood risk?

Thirdly, as the standpipes are joined with a flexible coupling there is some wobble on the durso with the water flow. Not huge but it's there. Is this likely to cause too much wiggle and leaking issues down below? Ie should I undo this and deal with the flushing toilet until I can afford the $150 aqua one kit? 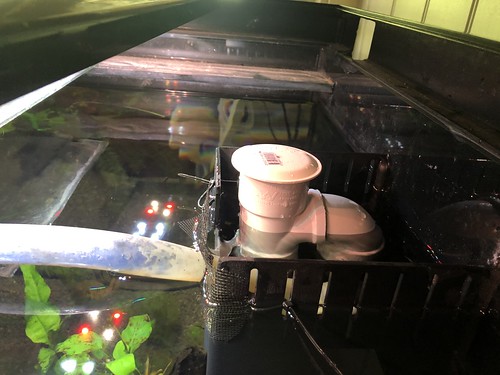 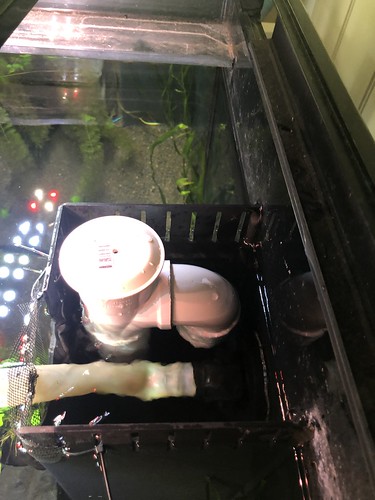 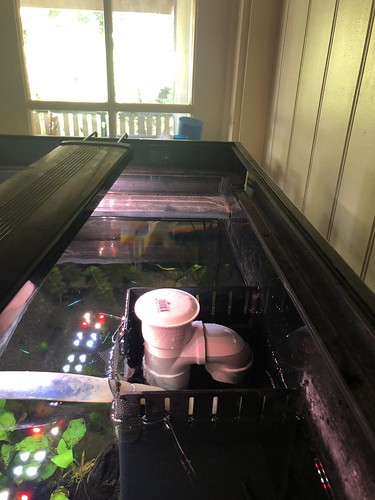 Thank you kindly for any and all advice