(View User Tanks)
PTrader: (4/100%)
Join Date: Sep 2014
Location: Oregon
Posts: 608
BioCube LED Retrofit with Finnex Planted+ and Splash Guard
My old Oceanic BioCube PC bulbs exploded inside the hood, and so it was time to change out the lighting. Sorry, I didn't take many pictures along the way.
This is not a "budget" build, if so I would've just bought a single Planted+ and stuck it on the existing rim of the tank. (Which I did while I planned out this project)
Hopefully someone will find it useful, much like those that have gone before me.

*a brief historical dive* After much looking I found an old RapidLED Nano-reef kit with drivers, heatsink, LEDs, etc of craigslist. I replaced some of the 10K white and royal blues with reds, cyan, 6000k, and green LEDs. Got them all put together and didn't like the huge drivers and 10V dimmer requirements, so I was shopping for some nano drivers for the array. Around this time (about a year ago) I saw that RapidLED had the Aurora Freshwater Puck and scrapped everything in favor of the puck. I get everything mounted to the heatsink and mounted it in my hood with new drivers and fan from Steve's LEDs. It was great and I had dimming capability on the 4 channels, until the screw mounts in the hook gave way due to the brittleness of the plastic and weight of the heatsink and the Aurora puck melted holes in the acrylic cover.

Given that spare parts are no longer available for Oceanic products, I turned to Google and followed the wisdom of those before me in creating my own splash cover from ReefCentral. I used my local TAP Plastic retailer and they cut everything for $13.50. I glued everything together with acrylic cement and aside from my novice attempt at gluing acrylic it went really well all things considered. The measurements for the cover are spot on in the referenced thread, except that the factory screws are #7, and 2" is WAY too long. So I used both 1.25" and 1.75" #7 pan head screws for the cover (depending on what was needed) with a small brass washer. I highly recommend using the exact thread on plastic so you don't cross thread. My hood was also VERY brittle from the bulbs exploding so breaking off screw mounts was a problem I had to deal with.

I had previously looked at the threads from Mattinmd, and Mark in MD on Finnex Planted+ dimming and Biocube LED retrofits. I used these threads as inspiration.

I measured and determined that the 16" Finnex Planted+ would fit with some space on either end, and I could fit 2 of them in the area in the hood, and keep the original moonlights as well. So I stripped everything from the Aurora Puck failure out of the hood and installed the dimmers. I drilled 2 holes in the top and secured the nuts, and knobs. 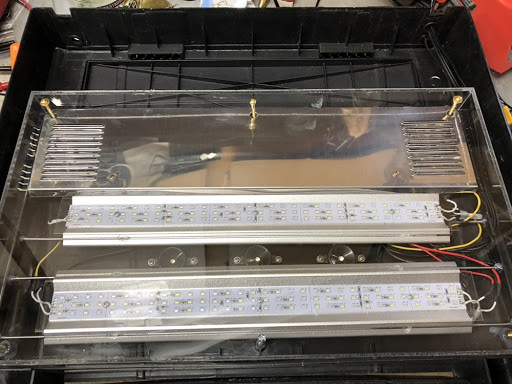 Next item of note was to figure out some mounting option for the Planted+. I stripped everything off the Planted+ housing until all I had were the aluminum extrusions. I had hoped to use the original end covers, but this wasn't going to work with the screw mount locations in the hood. I measured the holes in the aluminum housing and a 7/64 drill fits perfectly. I purchased a 36" - 7/64 drill rod and used that as the mounting rails for the Planted+. I cut them down to size approximately 4.5", beveled the sharp ends and put them into the housing and positioned it in the hood. The rear light placement was a little bit of a bugger as the holes from the original cables was right where the mounting rails were supposed to go. I heated 2 of the rods until they were red, and then bent them at 90 so that I could get away from the existing holes into some solid plastic. This worked perfectly and created a very secure mount for the housings. I then marked the locations for the holes using a Sharpie and removed the lights. I didn't have enough clearance for my drill to make the holes, so I simply heated a spare piece of drill rod and melted holes in the sidewalls of the hood about 3/8" from the top edges. 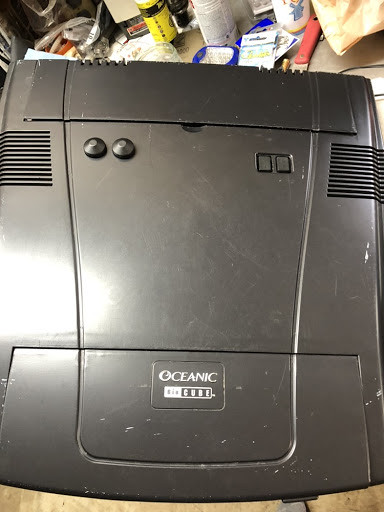 After that was completed, I installed the housings, and extended the rods until they went through the holes and I secured each one with a dab of hot-glue. I then put the light strips back onto the housing after putting some new thermal paste on the housings, and soldered the connections to the dimmers. I wanted the option of using the moon lights on the Finnex as well, so I used the original power switches on the BioCube and connected so I could turn off/on the blue LEDs while the rest of the LEDs were in use. I opted for using the dimmer knob as the on/off switch for all the Finnex LEDs so the blue LEDs are tied to the same power supply and therefore part of the same daylight spectrum (I just have the option of turning off the blue to make the light warmer, or on for making it cooler)

Everything went together well, and I tested along the way to make sure I didn't leave anything out. Put it back on the tank and my fish are happy! I do like being able to change the lighting intensity for the front or back of the tank even though with the 120-degree LEDs, it shouldn't matter that much on a BioCube29, but at least I have the option of turning one row off depending on the plants.
Here's the completed tank! 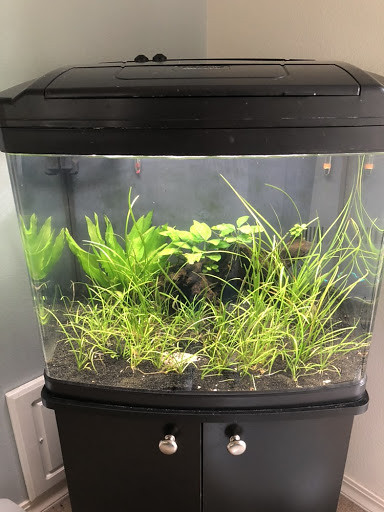 YouTube (Short URL)
Quesenek likes this.
"A man with a watch knows what time it is. A man with two watches is never sure."
jeffkrol is offline
Quote Quick Reply
post #3 of 3 (permalink) Old 07-11-2019, 11:06 PM Thread Starter
grizzly_a
Planted Tank Enthusiast


(View User Tanks)
PTrader: (4/100%)
Join Date: Sep 2014
Location: Oregon
Posts: 608
Ha! I'm going to enjoy at least 2 nights with the current setup before I get any whims for changing it up!
grizzly_a is offline
Quote Quick Reply