(View User Tanks)
PTrader: (0/0%)
Join Date: Mar 2019
Location: Maryland
Posts: 1,251
Quote:
Originally Posted by PlantedRich View Post
Can be done and certainly feel free to try but I give some thought to projects of this type that I think about. If it is that easy, why do we not see it done more often?
Are you the first bold person to want to build a large tank cheaply?
Are you the first to think of concrete as a material for tanks?
Are you sure that you will be better than the others who have tried?
If so, throw down the money and go for it!
There may just be a "better mousetrap" in your future!
We probably haven't seen it done on a small scale (as discussed its done all the time on large scale) because:
1) Most people prefer the look of glass, you have to really want at least one side to look like concrete before this is even something worth pursuing
2) Even assuming this works perfectly, the build will be significantly more difficult then a glass tank build since you need to make a mold, mix the concrete, pour it into the mold, let it set, sand the concrete, seal the concrete, and let it cure all before you ever get to assemble it
3) This build is cost effective (assuming it works) only because I can buy premade tempered glass panels at a fraction of what custom cut annealed glass panels would cost, if it were not for that one issue there would be little to no cost savings
4) GFRC concrete has really only become popular in the public eye in the last 10 or so years, so there would have been less public awareness of this even being possible before that
5) With all of that taken into account we also would only hear about it if someone posted their build and or experience on a popular aquarium forum

So that is probably why we haven't seen more of these builds. Then again the whole thing could fail spectacularly at several different points. So maybe that is why? I really can't claim any degree of certainty in success at this point in time. I can say that I am very interested in people's experiences who have worked with gfrc concrete to create furniture or other similar objects and also interested in anyone's experience attaching glass to concrete. If folks haven't done either, I admit I approach their recommendations with a large grain of salt.

I can promise the people here only that 1) I plan to make some test boards and assuming that works to make this aquarium as laid out, and 2) That success or failure I will post my results.
minorhero is online now
Quote Quick Reply
post #17 of 26 (permalink) Old 04-26-2019, 08:04 PM Thread Starter
minorhero
Wannabe Guru

Just finished pouring the concrete so I thought I would post a small update.

I looked locally for "GFRC" specific blends of concrete mix and simply could not find one. I can buy these online and have them shipped, but shipping is expensive. Specifically it costs between 35 and 40 dollars per bag of concrete to have it shipped. This effectively doubles the price of GFRC specific mixes to 70-80 dollars per bag. I decided that since a primary purpose of this exercise is to save money, I simply would not be able to use GFRC specific mixes. Instead I would need to use a different mix. This boiled down to the big box hardware stores. I chose Home Depot and bought a single 50 lb bag of Rapid Set Concrete Leveler. I chose this mix because it advertises 1150 psi of flexion strength. To give some perspective RTV 108 advertises 400 psi tensile strength. It is also a mix designed to be extremely loose since it is supposed to be "self leveling". I then poured 3 test pieces that are each 3 inches wide and 48 inches long.

The first test piece is a half inch thick and is only Rapid Set Concrete Leveler with nothing added and mixed to package directions.

The second test piece was supposed to be a half inch thick but I think ended up slightly thicker. It also has added to it 1/2 inch glass fibers. 4% by weight.

The third test piece is 1 inch thick and also has added to it the glass fibers.

Here is a picture of all 3 pieces. 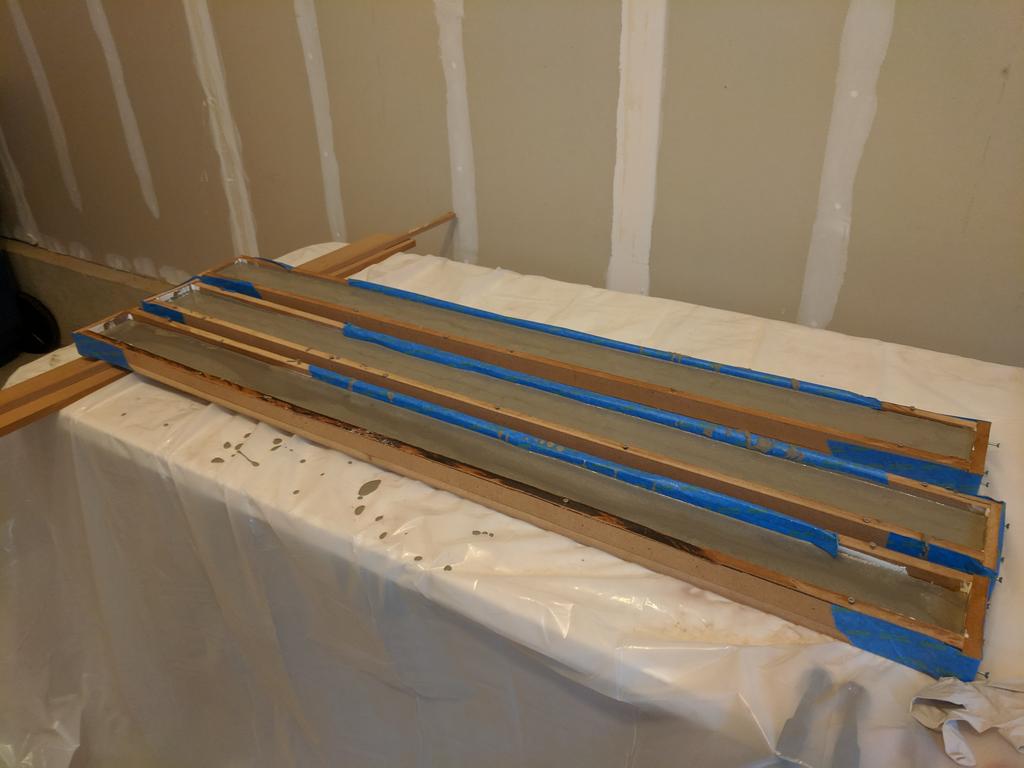 My forms are super rough and also warped since I didn't have a flat surface to work from. I am not stressed about either since this is just to give me a rough estimate of strength. I frankly expect these test pieces to be significantly stronger then a similar piece of tempered glass. If they are I will proceed with this build. Next up is a lot of waiting. It takes 28 days to cure fully. Tomorrow I can take them out of the form and frankly they will have achieved around 70% of their strength by that time. I may get impatient and test them before the 28 days we shall see.
minorhero is online now
Quote Quick Reply
post #18 of 26 (permalink) Old 04-26-2019, 08:31 PM
jeffkrol
Planted Tank Guru

Quote:
The problem with using glass fibers as reinforcement for concrete is that glass breaks down in an alkaline environment--and there's almost nothing more alkaline than concrete. You may have heard of concrete being damaged by alkali-silica reactivity (ASR) when there is reactive silica in the aggregate. Glass is primarily silica. The original GFRC in the 1940s rapidly lost strength as the glass was destroyed by the alkaline environment. In the 1970s alkali-resistant (AR) glass fibers were perfected by Owens-Corning and by Nippon Electric Glass (NEG) leading to a rapid increase in applications.
http://www.buddyrhodes.com/understan...isan-concrete/
"A man with a watch knows what time it is. A man with two watches is never sure."
Last edited by jeffkrol; 04-26-2019 at 08:59 PM. Reason: edit
jeffkrol is offline
Quote Quick Reply
post #19 of 26 (permalink) Old 04-26-2019, 09:26 PM Thread Starter
minorhero
Wannabe Guru

(View User Tanks)
PTrader: (0/0%)
Join Date: Mar 2019
Location: Maryland
Posts: 1,251
Yep that's the exact glass fiber I purchased. There was a competing brand but it really wasn't cheaper.
To view links or images in signatures your post count must be 10 or greater. You currently have 0 posts.

(View User Tanks)
PTrader: (2/100%)
Join Date: Oct 2017
Location: Michigan
Posts: 117
I suggest you spend the extra $240 to make the bottom and back side glass as well. It will be extraordinarily easier to follow tried-and-true tank construction methods than to try and save $100 with concrete.
To view links or images in signatures your post count must be 10 or greater. You currently have 0 posts.


To view links or images in signatures your post count must be 10 or greater. You currently have 0 posts.
SpringHalo is offline
Quote Quick Reply
post #21 of 26 (permalink) Old 04-26-2019, 10:13 PM Thread Starter
minorhero
Wannabe Guru

(View User Tanks)
PTrader: (0/0%)
Join Date: Mar 2019
Location: Maryland
Posts: 1,251
It would be slightly more actually since I would also need to do euro bracing if using 1/2" glass. That said, the build itself is fun. So why not break new ground as it were?
To view links or images in signatures your post count must be 10 or greater. You currently have 0 posts.

you know one of the fun advantages of this would be pouring a free form base (w/ glass mounting groove) and a patterned back slab..possibly even stained i.e like fake sandstone ect..
"A man with a watch knows what time it is. A man with two watches is never sure."
jeffkrol is offline
Quote Quick Reply
post #23 of 26 (permalink) Old 04-27-2019, 01:43 AM Thread Starter
minorhero
Wannabe Guru

(View User Tanks)
PTrader: (0/0%)
Join Date: Mar 2019
Location: Maryland
Posts: 1,251
Exactly, there are definitely some advantages to this if it works. You can also make your groove deep enough that you won't see the substrate cross section which would simplify both layout and cleaning since you wouldn't need to credit card scrape the glass below substrate level. You can also form the concrete around any plumbing you might otherwise need to drill a tank for.
To view links or images in signatures your post count must be 10 or greater. You currently have 0 posts.


To view links or images in signatures your post count must be 10 or greater. You currently have 0 posts.
minorhero is online now
Quote Quick Reply
post #24 of 26 (permalink) Old 04-27-2019, 09:14 PM Thread Starter
minorhero
Wannabe Guru

I took the forms off today but sadly the results were not good.

First off I made the mistake of using MDF for my forms. Others I have seen online used melamine. This would have been a better choice because it wouldn't have bonded to the concrete like my darn mdf did. I applied a silicone spray lubricant to my mdf in the hopes it would provide a release agent but I either didn't do a good enough job applying it or it flat didn't work because the MDF stuck extremely well to the mdf making removal very difficult.

On the first form the one with no fibers the concrete broke in several places while trying to remove it. On the second form, the half inch with fibers I was able to remove it intact. I then broke the darn concrete in half when I leaned down on it just a little bit. I am guessing less then 20 lbs of weight. The third test piece was successfully removed and remains intact.

So what does this mean for the experiment?

Well its certainly not good news. I still have enough concrete to go forward but I am doing so with a LOT more skepticism. While it takes 28 days for the concrete to fully cure and its only been 24 hours, I really did expect the concrete to be tougher at this point. So now its just a waiting game. I have enough small pieces of concrete that I can actually test its strength at multiple time points to see how the curing is coming along. That said, I am not going to bother doing anything more with this till at least a week from now.
minorhero is online now
Quote Quick Reply
post #25 of 26 (permalink) Old 04-28-2019, 12:03 AM
livebearerlove
Planted Tank Enthusiast

(View User Tanks)
PTrader: (0/0%)
Join Date: Aug 2013
Location: Minnesota, USA
Posts: 680
Sorry to hear your first experiment didnt work out.
If you can get ahold of glass bubbles made by 3M and fiberglass.... it makes the concrete stronger, cure faster, and lighter. I used it for a tank... I only made 'floating concrete spheres' with some feeder fish for show....but you get the idea:

You Tube
Giving back creates a virtuous cycle that makes everyone more successful (as long as they cycle!)
7 Tanks and counting..... plus all these critters to feed critters
livebearerlove is offline
Quote Quick Reply
post #26 of 26 (permalink) Old 05-23-2019, 10:42 PM Thread Starter
minorhero
Wannabe Guru

So today was testing day. Technically 27 days instead of 28, but I had time today and none tomorrow.

So I tested the pieces by putting a a small 2x4 to distribute wight on the concrete then putting various sizes of plywood and melamine on the 2x4 and looked to see when it cracked.

Both of these numbers are worse than glass the project is thus a non starter. All is not lost though since the wife has agreed to a 120 gallon rimless tank.

Anyone have recommendations? So far I am considering planet aquarium and glass cages.

Here is a picture of the test in process: 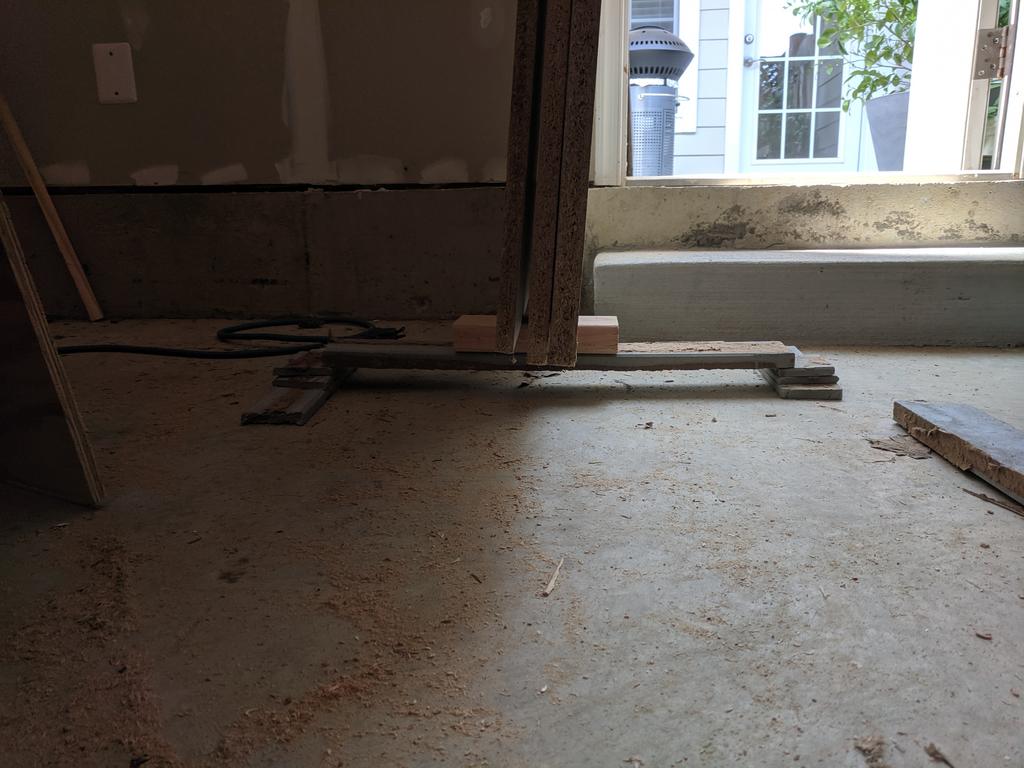 And the sad ending: 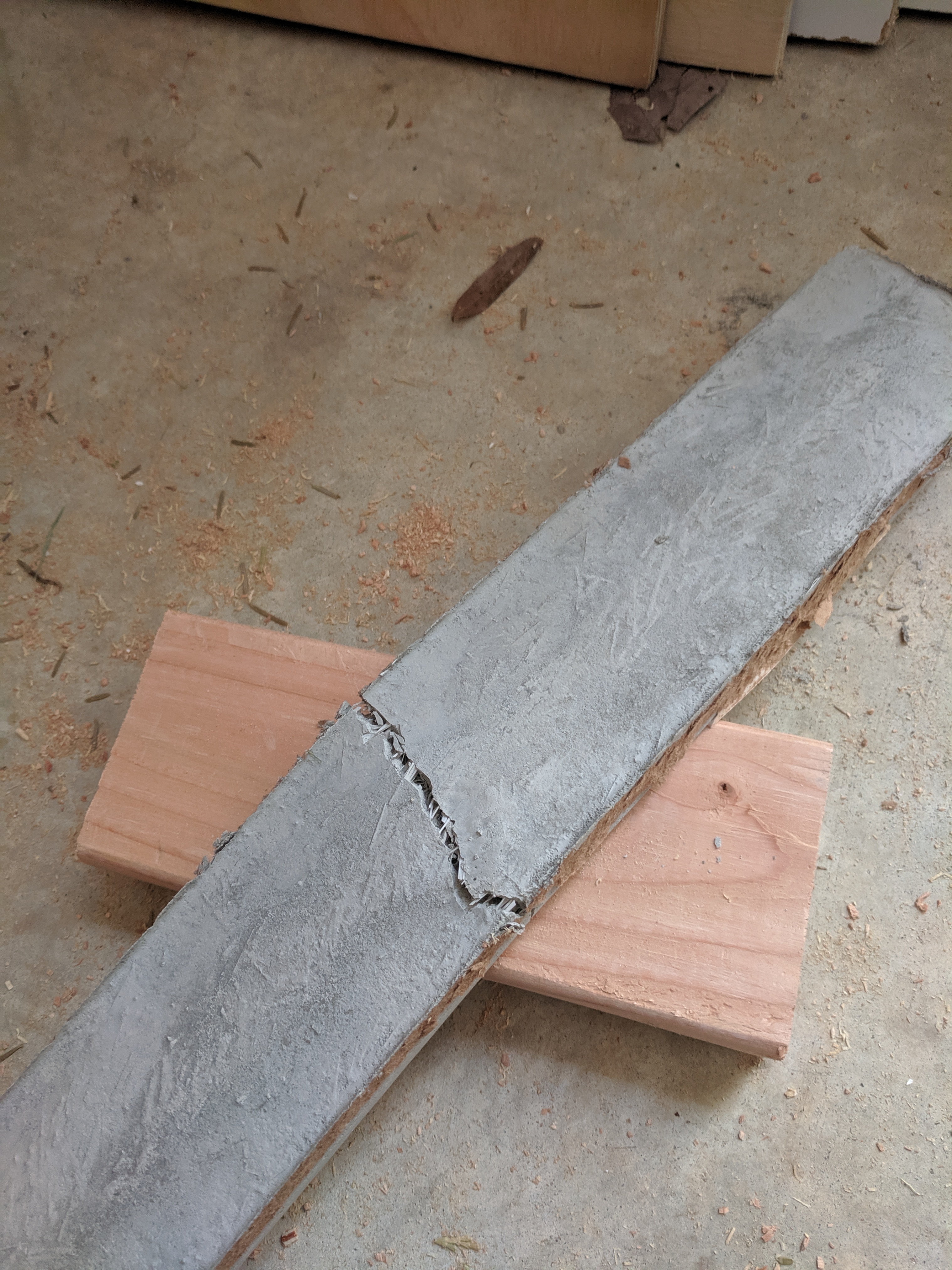