This has been a slow project for me but has been steadily progressing. I have always wanted a dim-able LED setup so I could simulate the Dawn and Dusk periods of a "Natural" day. This way the fish can adjust to the increasing light unlike an ON/OFF timer. About a month ago I decided to bite the bullet and dove in.

In a nutshell, I have created an LED fixture and a timer that displays the current time and the current brightness as a percent of full bright on an LCD screen. I am using a Rotary Encoder, like the volume knob on your stereo, to manually control the brightness level of the LEDs as well as set the time and program transition intervals.

The Hardware;
For power, I am using a PC ATX PS (power supply). Its rated at 12A on the 12v rail and more than I will even need on the 5v and 3.3v rail. PC power supplies can be found on the cheap too. I went this route because I am creating my own light timer that will dim or brighten the LEDs at programmed intervals and the hardware for that requires 5V.

For the LEDs, I found some 10 watt ebay LEDs that are perfect for my needs. Search ebay for "12V 10W 600Lumen White Led Energy Saving Lamp NEW" to see them. $7 each and they are rated for 12V at 1A, I am feeding them around 900mA and they are plenty bright. I am also very pleased with the color, somewhere around 7000K, much whiter then standard T8 6500K. They are not the best LED you can get, but the price is right and they are super easy to mount.

For the fixture, I needed something that would allow for easy tank maintenance and act as a heat sink for the LEDs, at 10 watts each they get hot. I went to Lowes and bought some L and U-Channel aluminum and made the following. I kept the fixture to two separate pieces so I could have full access to one side of the tank while still having good light over the other side. I used banana plugs and jacks for easy disconnects when I want to move stuff around 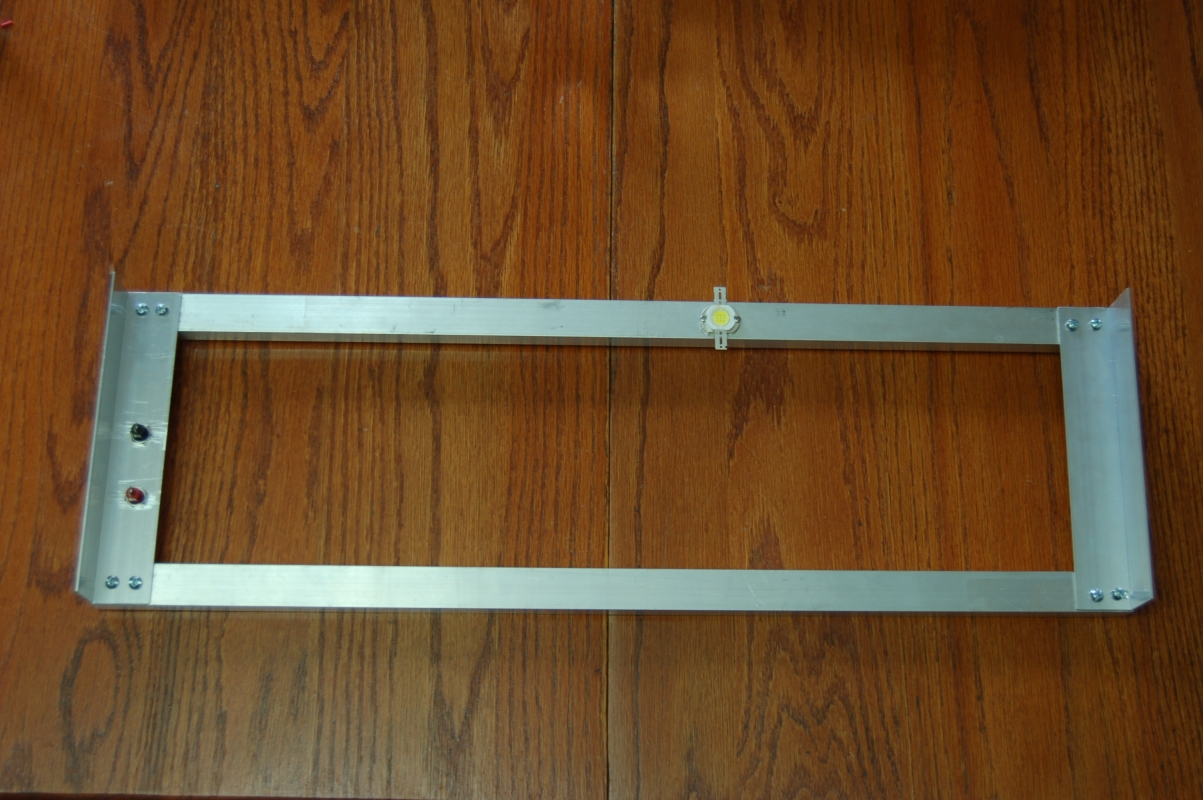 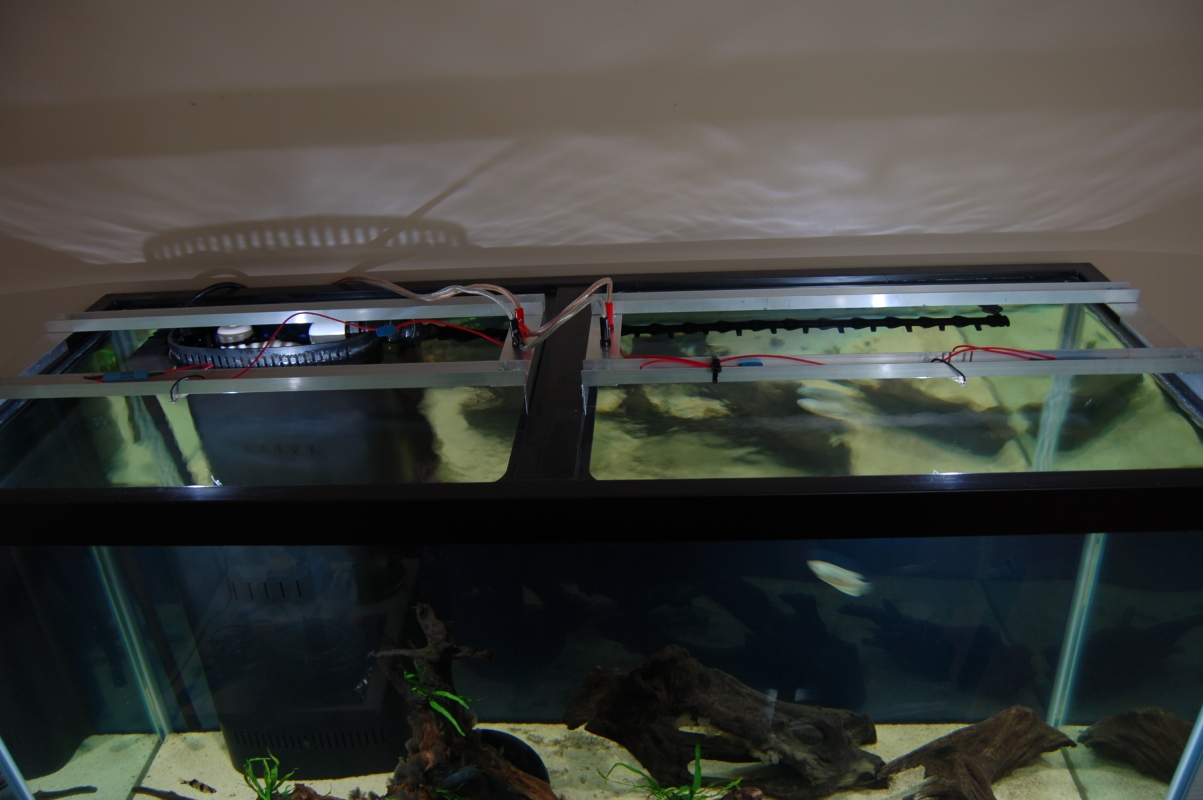 Pardon the messy tank. I am waiting to move so the tank has been in limbo for a while now. Just been working on getting all the hardware I need together.

Anyways, to keep the LEDs running at 900mA from the 12V PS, I put a 2.2Ohm 10Watt wirewound resister in series with each LED. Each LED is wired in parallel with the 12V PS, this way if one LED ever buns out the others will still work and not get overloaded.

My plan is to use 8 of them for OK coverage while still maintaining the shimmer effect. So far I only have two hooked up for testing and I am happy with the results. 8 of them will be BRIGHT (theoretically 80 Watts)!! Good enough for a low light setup on my 90 Gallon if not better. I can say that the two LEDs are about as bright as one 2xOD 48" T8 with an icecap T5 reflector. 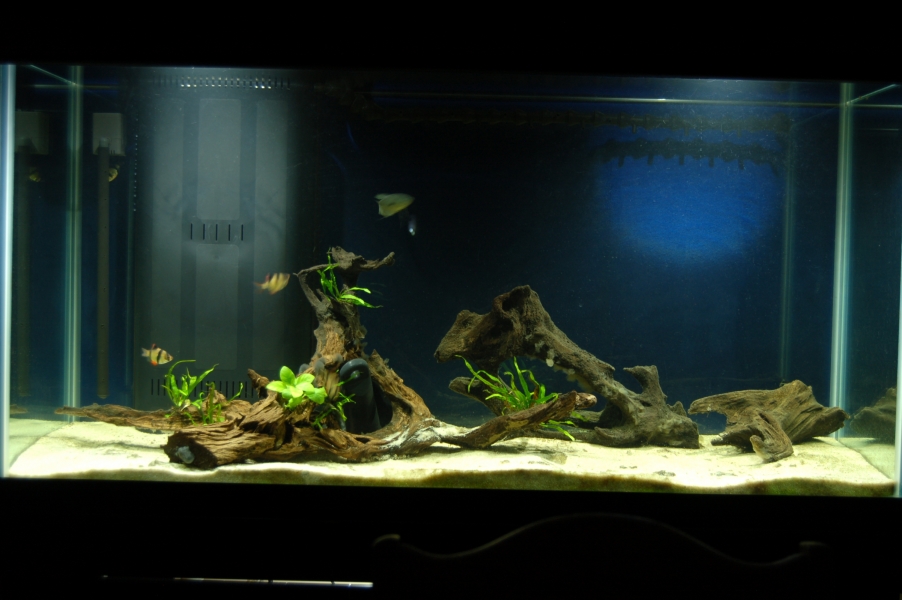 For the timer, I am using an ATMega16 Micro Controller. It needs a 5v input and using the power supply 5v output eliminates the need for 5V voltage regulator. I am also using the 3.3v rail for the LCD back light. The ATMega16 controls a MOSFET via PWM (pulse width modulation) to dim or brighten the LEDs. The LEDs get their power from the MOSFET. 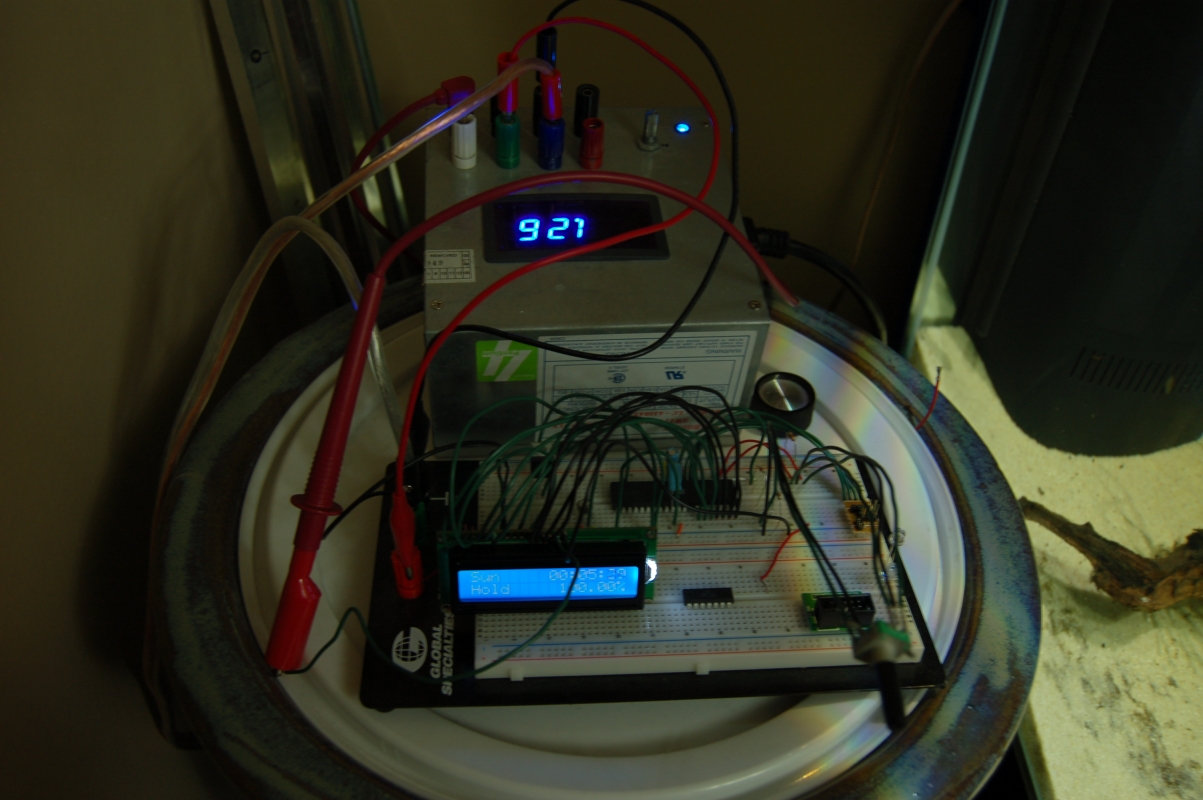 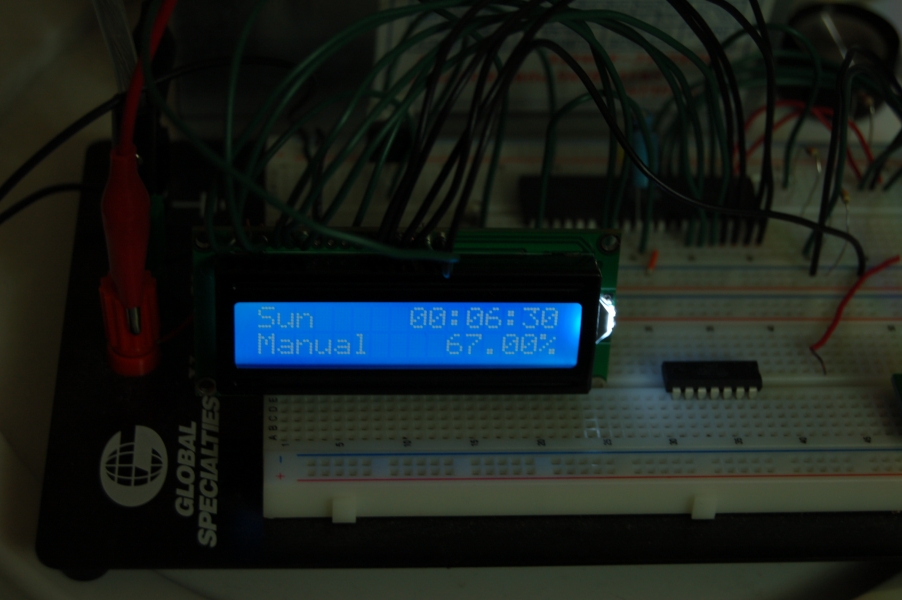 The Software;
The timer is like those digital ON/OFF light timers you can find at Wal-Mart or wherever but it also allows me to set a "light level" and a "Transition Length". The "light level" is a percent of full bright (0.01% to 100%), and the "Transition Length" is the time span in minutes (1 to 30) over which the brightness will be adjusted. The timer can also act as a ON/OFF switch if I choose.


Here is an example of how it works.
Say its 5PM and I have a current light level of 75% of full bright.

I can also manually adjust the brightness at anytime by tuning the Rotary Encoder clock-wise or counter clock-wise to brighten or dim the LEDs.

I uploaded a crappy video of the LEDs transitioning from off to 100% over two minutes.

I still have a lot of work to do like adding 6 more LEDs to the fixtures (4 per fixture) and I need to finish writing the code for the Micro Controller but Im happy with were this project is at so far. When I get some more LEDs mounted I will upload another video.
madhatter4 is offline
Quote Quick Reply
post #2 of 41 (permalink) Old 11-17-2010, 03:01 AM
Green Leaf Aquariums
Planted Tank Guru

I tried making a fade-able LED setup as well but it randomly would go crazy once in awhile like turned on in the middle of the night. My guess was a power surge would disrupt the PWM cycle. Let me know if you have the same issue or if you know why that happens.
To view links or images in signatures your post count must be 10 or greater. You currently have 0 posts.
mistergreen is offline
Quote Quick Reply
post #7 of 41 (permalink) Old 11-17-2010, 04:23 AM
bigboij
Planted Tank Enthusiast

(View User Tanks)
PTrader: (1/100%)
Join Date: Jul 2009
Location: Denver, CO
Posts: 885
amazing setup if that is the light with only two bulbs that thing will be insane bright with all 8.
To view links or images in signatures your post count must be 10 or greater. You currently have 0 posts.

I tried making a fade-able LED setup as well but it randomly would go crazy once in awhile like turned on in the middle of the night. My guess was a power surge would disrupt the PWM cycle. Let me know if you have the same issue or if you know why that happens.
Yeah, thats my testing power supply. I tied the +12V and -12V rails together with an LM317 to give a variable 1.25 - 22V output. I threw in a digital voltmeter on the output so I can keep my good voltmeter free for other things.

I have worked out most of the bugs in my software but I know some still exist. I did have some weirdness with the LEDs at first but it seems to have settled down.
madhatter4 is offline
Quote Quick Reply
post #9 of 41 (permalink) Old 11-17-2010, 04:42 AM
Cuchulainn
Planted Tank Obsessed


(View User Tanks)
PTrader: (3/100%)
Join Date: Dec 2007
Location: Plano, Tx
Posts: 142
Quote:
Originally Posted by Cuchulainn View Post
K, so when will U be putting these into production? I want one!

Funny you should mention that. If I can make a decent build out of this and a few people are interested, I will make a production run of timers.

There are some things I want to add like a 3v coin cell battery backup for brown/black out protection. I am thinking about adding another PWM channel or two for supplementing blue and/or red LEDs too.

Quote:
Originally Posted by GitMoe View Post
Total build cost? Really awesome....
So far, not including things I already have like the PS and the ATMega16, with all 8 LEDs it will be around $100.

Some parts could be had for cheaper, like the resistors, but were out of stock when I placed my order.

The 8 LEDs may be over kill as well but I can always just dim them to fit my needs. I thinks its better to have to much light and dial it back as needed then trying to work with to little light. After all, light is what drives the whole cycle and this setup will give me fine gran light control.
madhatter4 is offline
Quote Quick Reply
post #12 of 41 (permalink) Old 11-17-2010, 03:45 PM
CptanPanic
Algae Grower

Integrating the readout/controls into the exterior side of the stand would be pretty cool. Even better yet would be to go REALLY baller and use some sort of touch-screen interface (ie... iPod touch) to change settings, control, etc.

Way over my head, but I'm in to see this little project!!

J
To view links or images in signatures your post count must be 10 or greater. You currently have 0 posts.

I understand part of the electrical stuff: resistors in series with bulbs in parallel I get; MOSFET, not so much, but you don't have to tutor me here...
By using the computer power supply that is rated at 12A on the 12v rail, you could power up to 12 of your bulbs? So why is everyone messing around with $20 buckpucks that will only power 4 LEDs and non-computer power supplies? If I could salvage my old computer parts and buy some resistors, it seems a lot cheaper.
tzen is offline
Quote Quick Reply