(View User Tanks)
PTrader: (15/100%)
Join Date: Apr 2012
Location: Maryland, USA
Posts: 390
Cheap PVC Lighting Fixture
I was getting really tired of having these bulky ugly things holding my lights up OR just having too much light on my tanks. I decided to go to Home Depot and picked up some PVC pipes and some joints to create a little cheap stand. I applied to to two tanks, a 20G Long and a 150G.

I first cut off part of the PVC so it could sit flat, then used the cut part to help it stand up. Just taking hot glue, I attached it to the counter top like this: 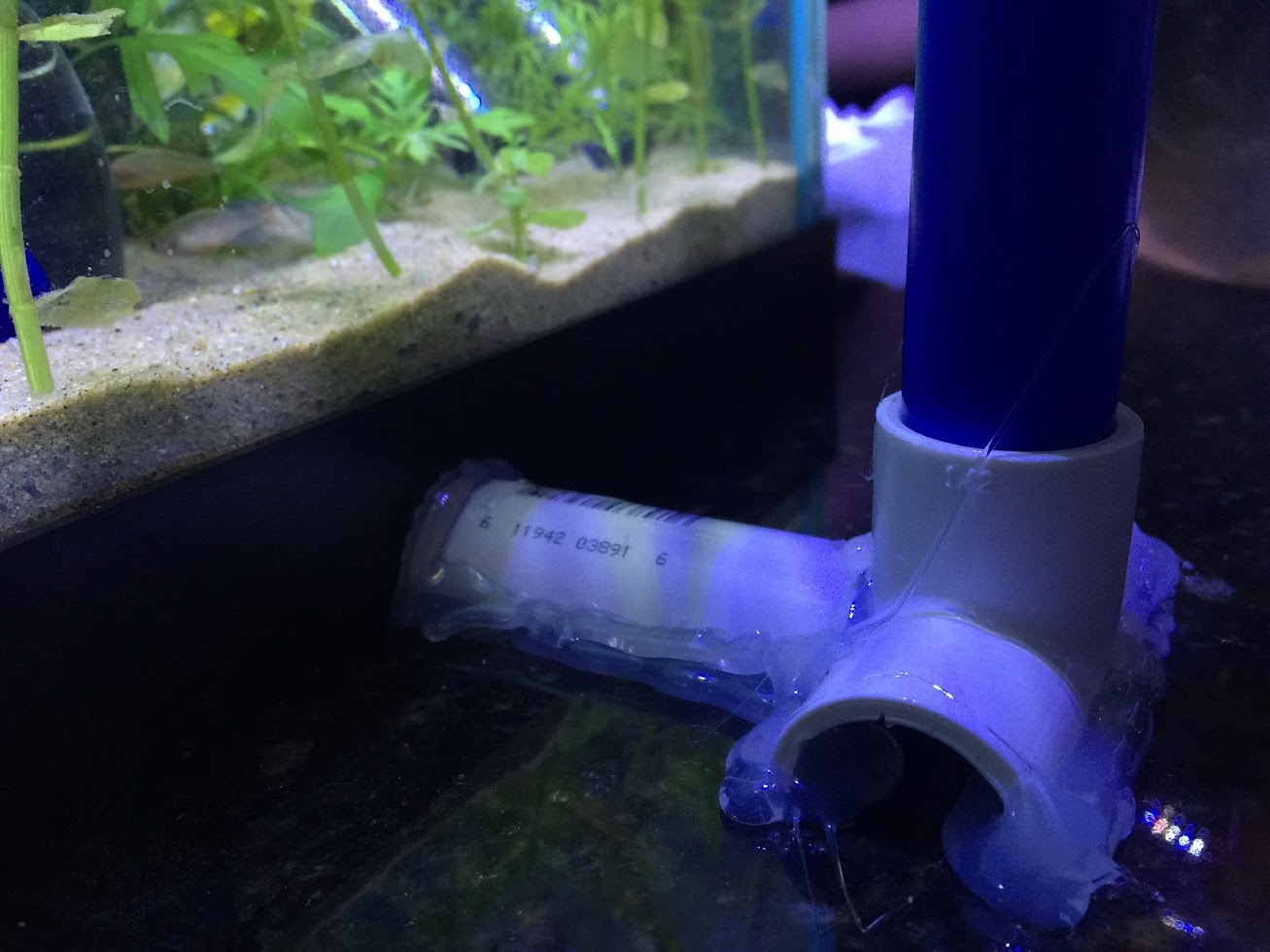 The top part where the light fits in was pretty easy. I just cut a slit to let the bar fit and it sits perfectly: 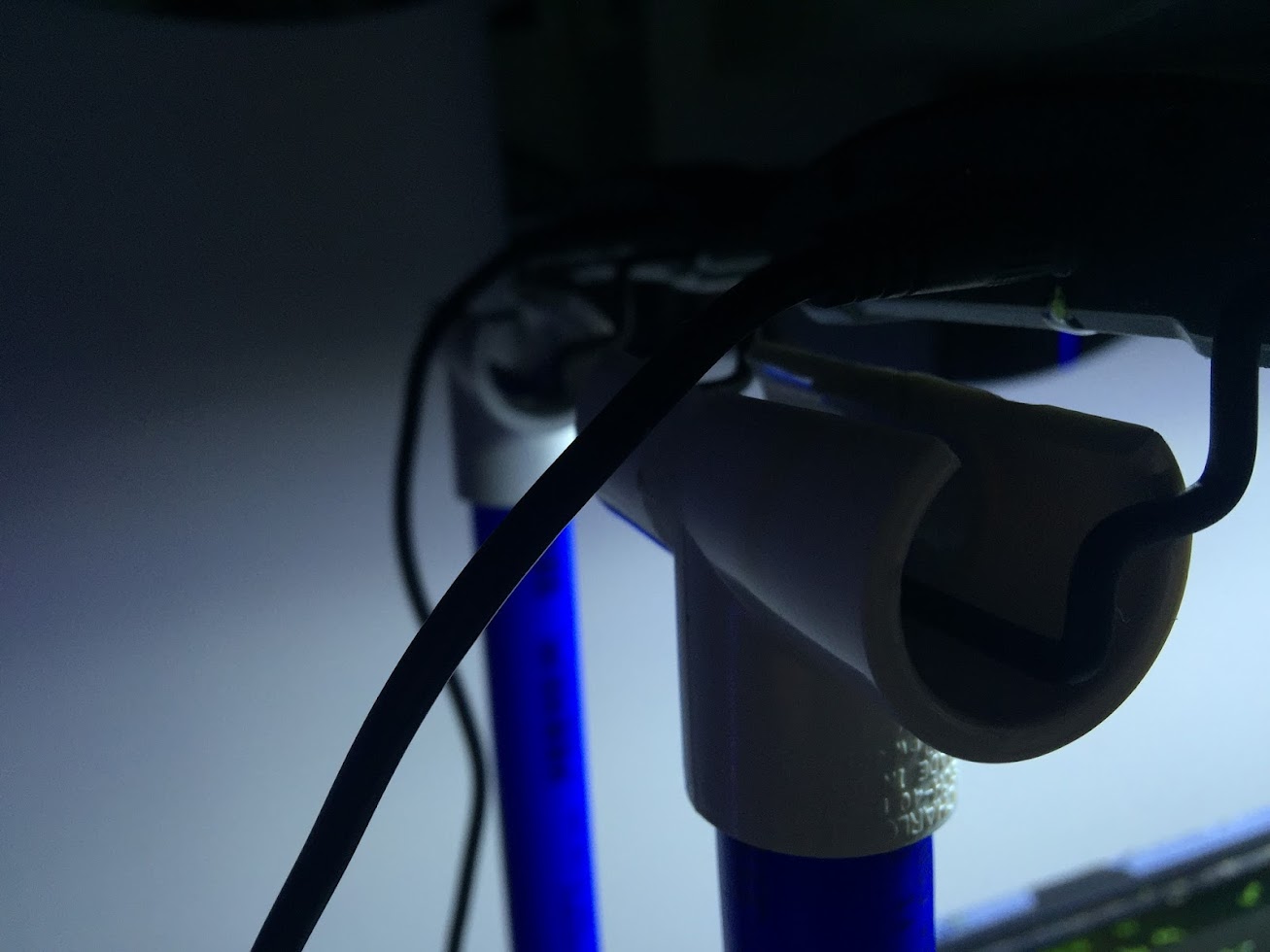 And I attached the other end to the wall with command strip coat hangers: 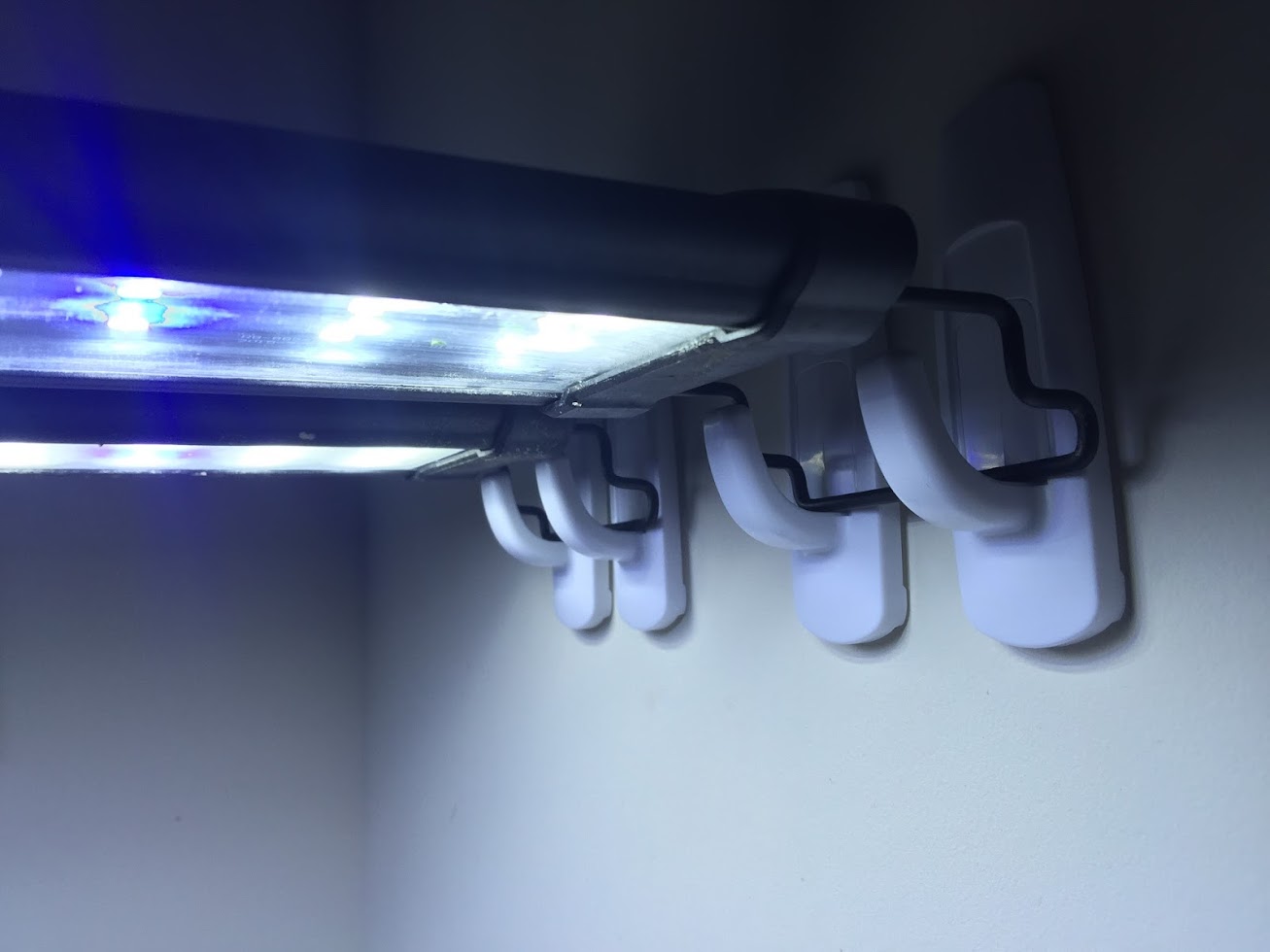 On the 150G I couldn't glue the PVC right onto the tank because it wouldn't stick. It would have been a very poorly constructed stand. I took a wooden ruler and glued the PVC to it. That allowed me to glue the flat wider bottom of the wood to the tank like this: 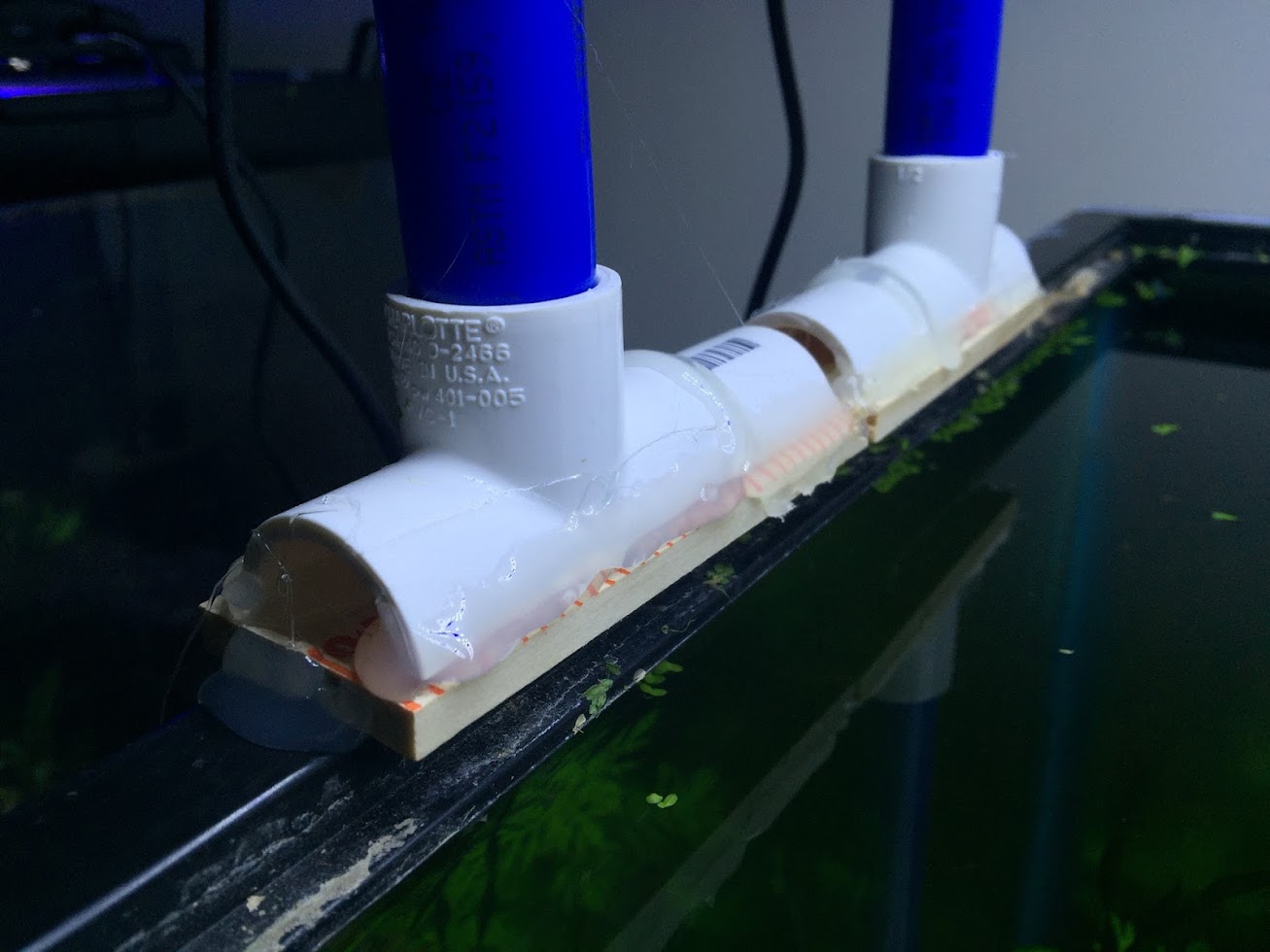 I'm REALLY happy with the results. It's looks really nice in comparison to what I had and now all I have to do is paint it or color it. I know, I should have painted it before...but I'll get there. I'm going to make it look really nice later on. I just wanted it set up because I was using the weirdest things. 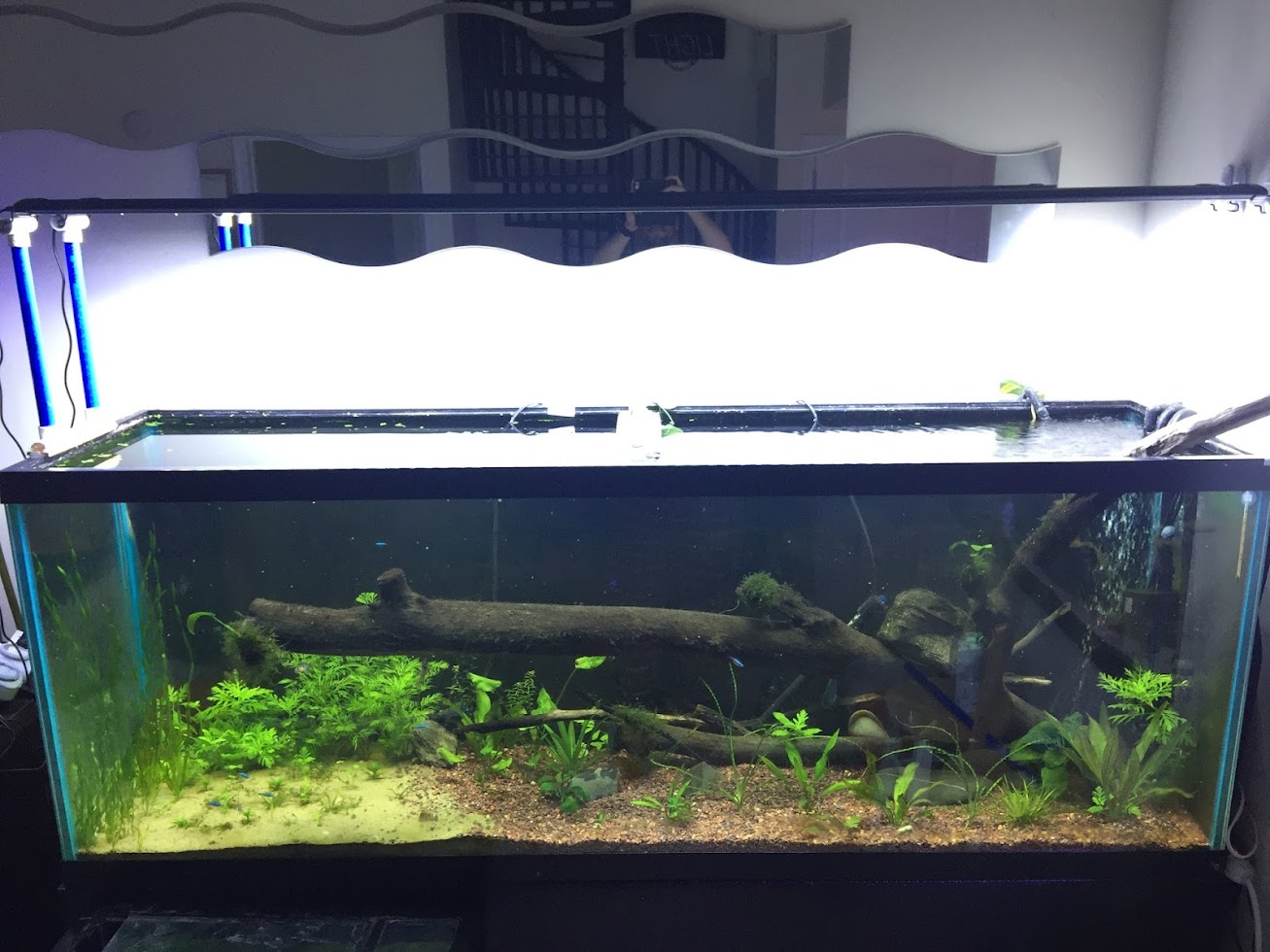 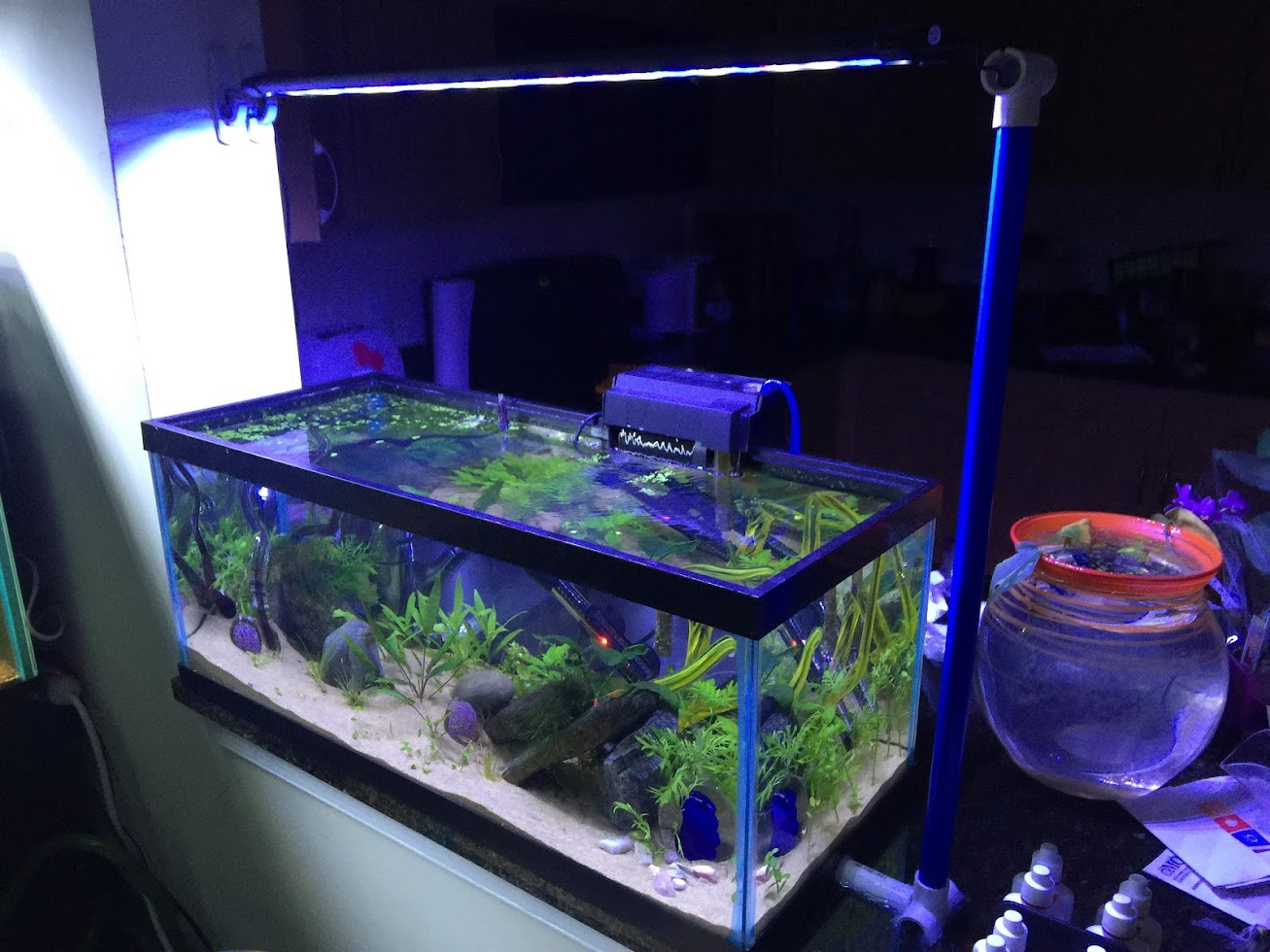 Cost of materials:
That's pretty damn cheap for what I got. Wow...I just thought about running the wires down the PVC pipe to hide them...we'll I'll be doing that at some point.
The Fish Apartment
YouTube - Termato

(View User Tanks)
PTrader: (15/100%)
Join Date: Apr 2012
Location: Maryland, USA
Posts: 390
One warning on this is that the hot glue I used to glue it to the counter top wasn't a good idea. Didn't stay like that long. Tape was a much better solution. The hot glue on the tank was fine though--held up well.
The Fish Apartment
YouTube - Termato

Someone who asks for advice, then does the exact opposite.

To view links or images in signatures your post count must be 10 or greater. You currently have 0 posts.
The Big Buddha is offline
Quote Quick Reply
post #4 of 4 (permalink) Old 09-06-2016, 05:22 PM
PlantedRich
Planted Tank Guru

(View User Tanks)
PTrader: (2/100%)
Join Date: Jul 2010
Location: United States
Posts: 12,306
Missed your first posting but I'm glad to see what others do to get where they want to be. Good use of the old noggin?
Not sure if you've got past that point in the last few months but something that might make hiding the wire? Since you have shown you can cut PVC, have you thought about just cutting a slot the full length of the uprights to slide the cord in out of sight. Might be easier than rewiring?

Hot glue on the counter top didn't work? Sounded good but then I might have gone silicone as I use it for a lot of things.
Looks like it works and that is always a good thing!
PlantedRich is online now
Quote Quick Reply