(View User Tanks)
PTrader: (0/0%)
Join Date: Aug 2008
Location: Springfield, PA
Posts: 75
Sorta newb 29G Build Thread
Hi everyone. Let me start by saying thank you to those of you who have already helped me along getting started.

The sorta newb part comes from some experience I already have but from years ago with a planted tank. Back then I had a 45g tall and used to make my own CO2 plus a 10g nano that was totally low tech but really looked nice with some harlequins and lotus plants.

Other then that I have been keeping reef tanks for the last 7 or 8 years now which can actually get in the way of thinking about how to set up a planted tank believe it or not!

ok, I guess if you're still reading then it's time to get on with it! And of course post some pics!

A friend of mine had heard me complaining about how I hated the little acrylic Eclipse6 I had. Between the scratches and the less then clear view if I found it frustrating. SO he had a 29G tank in his garage that had been used as a sump at one time and he brought it over and dumped it and a wet/dry on the floor and said have fun. Hmmm....

My brother helped me to build a stand and canopy for my 125G so I felt confident enough that I could handle this one.

First things first, I needed coffee, plans and some tools! 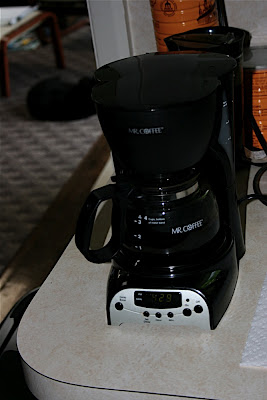 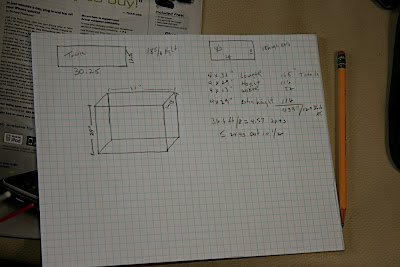 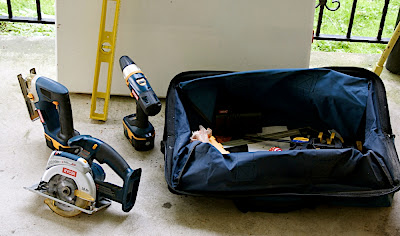 Cut the wood, drill, screw and hammer...viola! A stand frame! 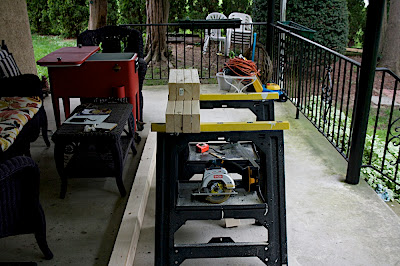 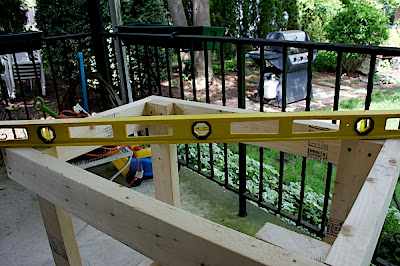 Whew! That was a long afternoon! After thinking about where it was going to go and how I would be setting up the wet/dry I decided I wanted to make the stand a little deeper. So I took apart the sides and added some depth to them and also put in another 2x4 horizontally so that the tank weight would be supported entirely. This would also give me room in the back of the tank for electrical wires, tubing and whatever else needed to go from underneath up to the tank without having to have it exposed.

It's a little hard to tell from this angle what I'm talking about but here is a picture. 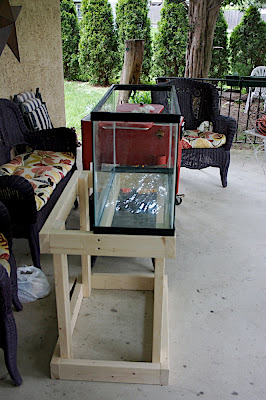 I used 1x2s and lauan for the sides and front. Glued on the back and nailed on the front. Of course being me I can't have anything plain so I shopped until I dropped and found some bamboo table mats. The it was off to H.D. again for some liquid nails and paint. This is what I came up with..... 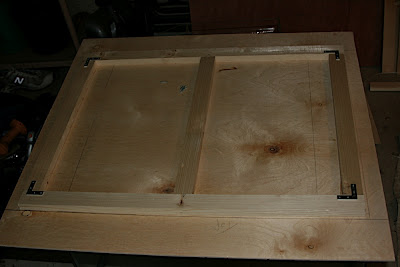 Then an undercoating of paint followed by the bamboo 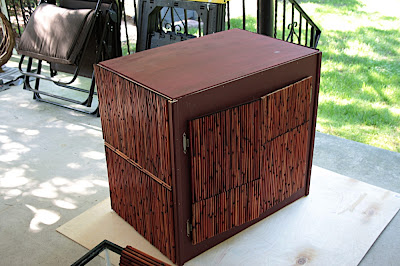 On the top of the stand behind where the tank will sit I used a whole cutter and jig saw to make a slot for all the wires and tubing to go. 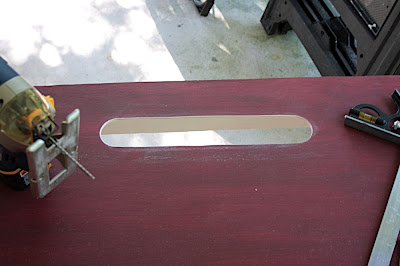 Finally I moved it into the house and added water! 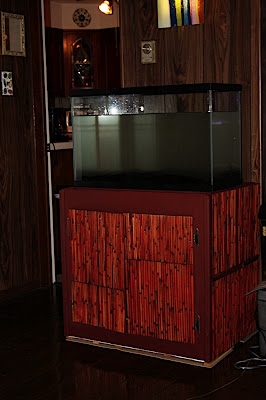 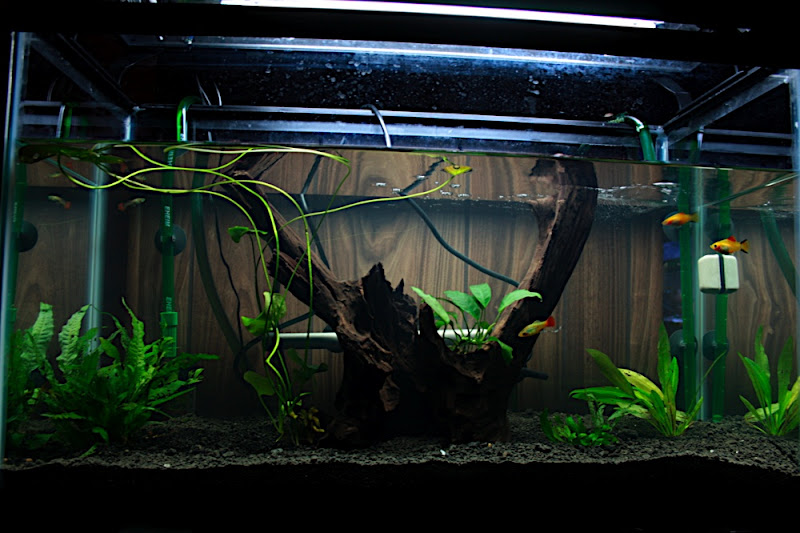 I am in the process of getting the co2 worked out. I am having a heck of a time trying to find a tank though. I have a regulator but it's for o2 and I need to switch out the fitting for a cga320 used on co2 tanks.

Comments and critiques are welcome and thanks for looking.

The stand looks great!
To view links or images in signatures your post count must be 10 or greater. You currently have 0 posts.
blair is offline
Quote Quick Reply
post #6 of 9 (permalink) Old 05-24-2009, 06:17 PM
bartak
Planted Member

(View User Tanks)
PTrader: (39/100%)
Join Date: Feb 2008
Location: Brooklyn, NY
Posts: 1,211
Nice. The bamboo looks great. I recently had thoughts about using bamboo boards for a litlle woodworking projects, but I can't find bamboo anywhere. Anyway, great stand. I remember having Ryobi tools when I started doing construction- everyone laughted at me and 3 years later my impact drill still going strong (I am using it at home now)
Ckeck out my photography&travel blog

Thanks
To view links or images in signatures your post count must be 10 or greater. You currently have 0 posts.


(View User Tanks)
PTrader: (0/0%)
Join Date: Aug 2008
Location: Springfield, PA
Posts: 75
Thanks everyone! I am happy with the way the stand turned out but I'm still not sure if I should completely cover the front or just leave it with the doors only in bamboo.

Marcinsmok, the bamboo was either hard to fond or when I did find it, it was expensive. Then for some reason out of the blue we were driving past the Pier1 store and I thought Hey! Lemme look at place mats. It was my brainstorm for this year I guess!


(View User Tanks)
PTrader: (0/0%)
Join Date: Aug 2008
Location: Springfield, PA
Posts: 75
So I want to bump this back up. I started classes at the end of May so I haven't had too much time to spend on the tank other then routine water changes. Mostly I have been trimming the plants I have in there and the only additions are a couple of cherry shrimp and 2 ottos.

I was able to get a pressurized CO2 but I have no diffusion method right now so it's really just a tube sitting in the tank running at about 3 bubbles a minute.

I have been testing my water parameters and my pH, GH and KH are still high. I'm not sure what to do. I think it might caused by the Eco-Complete substrate....or worse scenario the tank belonged to a friend who used it in his saltwater set up. I cleaned it out well and even used vinegar but could this still be causing the problem?

Any help, thoughts or ideas would be great. I would like to ultimately have a koi angel in this tank but now I don't know if that's going to be possible.