(View User Tanks)
PTrader: (13/100%)
Join Date: Oct 2010
Location: Hercules, CA
Posts: 875
Quote:
Originally Posted by Immortal1 View Post
Have a feeling I am going to have to do a major trim this weekend. As some of you may have seen in the Garage Time thread, I now have access to RO water. Not going to say that it has made all the difference in the world, but there are atleast a few plants that seem happier. Will have to admit, I am happier not having to rely entirely on the water flowing down the Mississippi river. Anyway, hope to post a few "cleaned up" pics this weekend :-) oh, and yes I have trimmed the various plants on the left once already since the previous FTS was taken

Nice... I think the best thing about RO is the stability... and of course knowing that nothing else is in your water unless you added it. Ive had issues with seasonal changes in my tap. GH anywhere from 0-1 to 5.


Sent from my iPhone using Tapatalk
Greggz, chayos00, Immortal1 and 1 others like this.
To view links or images in signatures your post count must be 10 or greater. You currently have 0 posts.

(View User Tanks)
PTrader: (1/100%)
Join Date: Feb 2015
Location: Iowa
Posts: 3,174
Quote:
Originally Posted by vvDO View Post
Nice... I think the best thing about RO is the stability... and of course knowing that nothing else is in your water unless you added it. I’ve had issues with seasonal changes in my tap. GH anywhere from 0-1 to 5.
Sent from my iPhone using Tapatalk
Agreed - stability is what I am looking for. As our tap water is derived from the "muddy" Mississippi River, we are somewhat at the mercy of what the various watersheds that feed the river provide us. During times of flooding from snow melt, we get pretty good water. Other times we get a lot of fertilizer run off from the surrounding farm land. As you stated, your GH is 0-1 to 5. During flooding mine has dropped to maybe 7dGH. Right now it is running 14dGH and a lot of that is from Calcium.


My hope (goal?) is to try and control as many variables as I can. As @Greggz has stated many times, find someones tank you like and learn what they are doing to get there. The Share Your Dosing thread https://www.plantedtank.net/forums/1...ng-thread.html has given me a lot of useful input as to various nutrient levels that seem to work.


Hopefully this weekend I can document a few changes that I have already noticed. The Lagenandra meeboldii "Pink" from Burr740 has been an interesting plant. For the longest time it would produce a new leaf but the would quickly get covered by algae. The leaf stems seemed rather short and the leaves stayed close to the substraight. In the picture above I have noticed that the leaves and stems are much more vertical. Almost like the plant has transitioned from slumped over to tall and happy (best I can explain it). Look at the picture below and compare it to the picture above - Lagenandra looks a lot happier. 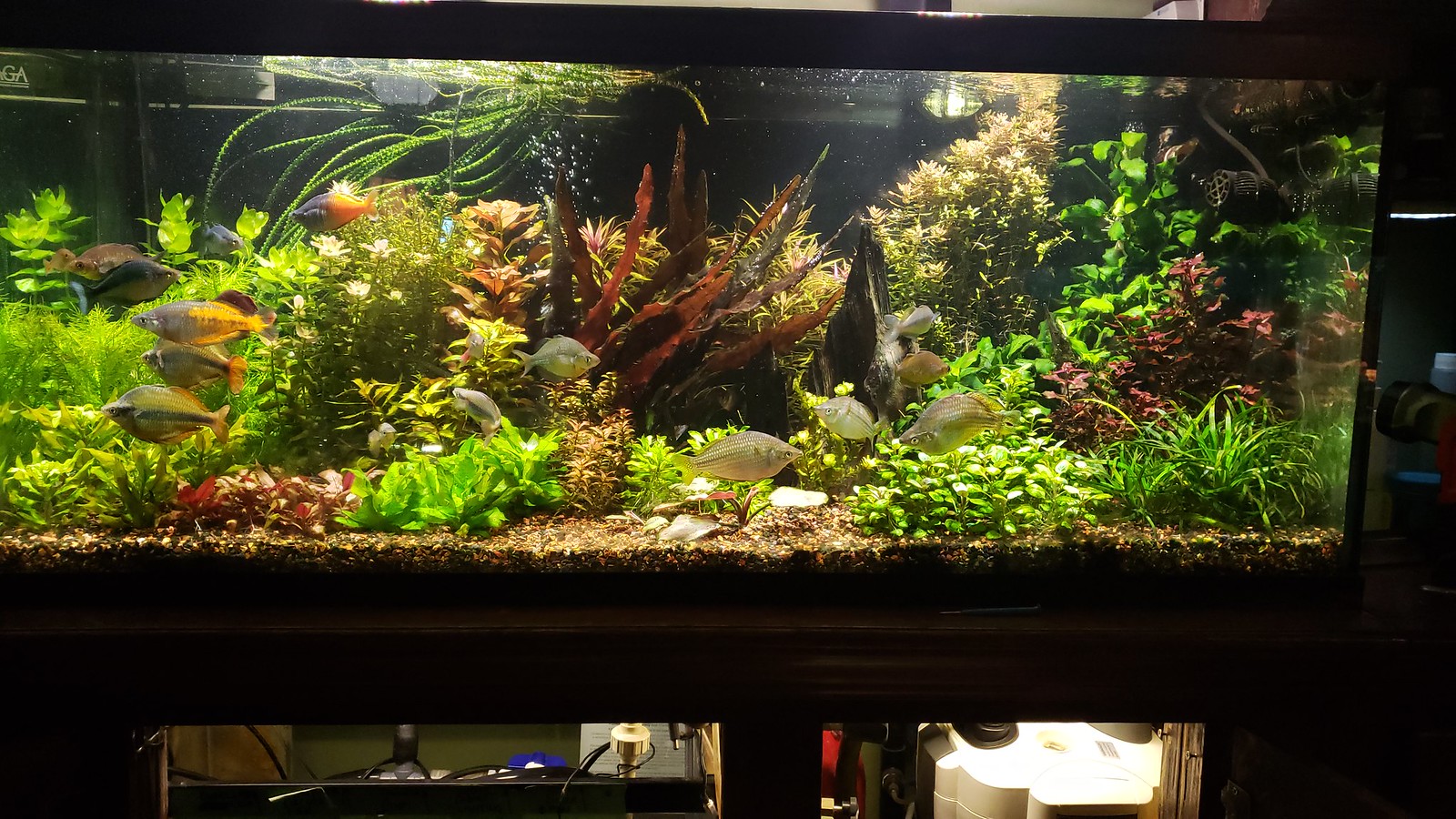 The Rotala Sri Lanka Bronze in the back right corner seems to be growing at a faster rate and with a bit more color.
The Rotala Rotundafolia and the Rotala Magenta seem to have bigger leaves and straighter stems.

The other thing I was noticing several weeks ago is the Erio Vietnam was getting covered by a lot of GDA and just looking unhappy in general. Last weekend I pulled all of it, separated the various clumps and saved what I thought was the best portions. With any luck a few weeks in better water will return it to a nice lush green appearance.


One of my other "standards" is the Mermaid weed that I have had forever. Last summer and fall I noted that the lowest leaves looked healthy and were well attached to the stem when I was doing my weekend trimming. This past December and January I noted that most of the lower leaves were getting covered with algae and the lowest leaves weren't holding on as well - obviously something was up.


Ok, so I have rambled enough. Stop back on Sunday and hopefully I will have more to add

Greggz, chayos00, Maryland Guppy and 3 others like this.
To view links or images in signatures your post count must be 10 or greater. You currently have 0 posts.

(View User Tanks)
PTrader: (1/100%)
Join Date: Feb 2015
Location: Iowa
Posts: 3,174
Well, spent a few hours hacking down the forest. In person, it's visually looking better. Moved a couple plant groupings around again trying to get a better layout of textures. As usual, I like the right hand side of the tank, but the left hand side just seems to be more of a muddled group of similar colors and textures. The middle is looking better at least.

During the hack fest I also drained of about 20 gallons and replaced it with pure RO water. Still need to do some testing to see where the numbers come in at (later today?).

As for pictures, figured I would start off with some fish pics. The wife calls this one "horn dog" as it seems every time I do a water change he wants to get frisky with the girls. The bright yellow stripe just glows in person. Getting a good picture of it - not so much. (sorry for all the flecks in the water - filter had not caught up yet)

I kinda chuckled with the wife this morning - "this fish is my most expensive - it's gold plated, lol"

As for a few plant close ups...

Greggz, rzn7z7, chayos00 and 4 others like this.
To view links or images in signatures your post count must be 10 or greater. You currently have 0 posts.

Tomorrow I will do my regular 50% water change, re-check the data and hopefully get things balanced out a little better.

Interesting thing of note to @burr740. Somewhere along the line you suggested to go back to dosing what made the plants happiest. So, in looking back thru my spreadsheet of Ca_Mg ratios I noted on 4/7/2019 that the my tap water tested out at Ca 35 and GH 7 which resulted in 9.15 Mg (lots of flood water on the Mississippi due to snow melt). I think I am on the right track :-)
Greggz, chayos00, burr740 and 1 others like this.
To view links or images in signatures your post count must be 10 or greater. You currently have 0 posts.

(View User Tanks)
PTrader: (1/100%)
Join Date: Feb 2015
Location: Iowa
Posts: 3,174
Sunday water change update. So today I did the typical 50% water change except this time it was with 100% RO water. Was kinda hoping to bring the Ca levels back down from the previous 70ppm nose bleed levels, not to mention the TDS of 450+ppm.

Well, mission accomplished. The TDS is now running 147ppm, Ca is 25ppm, Mg is 9.5ppm, GH is 5 and KH is 2. I also tested the NO3 & PO4 levels after the water change so I could better judge how much to add for the week. Tank NO3 was 10 and the PO4 was 1. Considering I added 8ppm PO4 last Sunday I am guessing my tank really likes some PO4. Either that or the Eco Complete has been depleted of what ever reserve it "may" have absorbed. Regardless, I think my numbers are finally where I would like them. Will have to look back on this post in a month or 2 and see if I was correct

Bump:
Quote:
Originally Posted by ipkiss View Post
@Immortal1 , I better see a miniature cow in your next tank
It would seem my wife has a pretty good sense of humor...

Greggz, vvDO, ipkiss and 6 others like this.
To view links or images in signatures your post count must be 10 or greater. You currently have 0 posts.

That she put the toy cows in the tank......or the fact that you have toy cows readily available!!

I guess that's the way they roll in Iowa!

That she put the toy cows in the tank......or the fact that you have toy cows readily available!!

I guess that's the way they roll in Iowa!

Curious. Up above you have a couple of Bow pics that you commented on that they came out particularly well. Any idea why? Change any settings?
Just the way we roll

As for the pictures, well, yes there was a small change for the group of pics. I grabbed my large LED flood light and set it on the table shining into the tank. This highlighted the various colors on the bows very nicely. But, I also just finished trimming and re-arranging almost 1/2 of the tank so the water was not as clear as I would have liked. Add to the fact that horn dog was particularly flirty with the girls and really had little interest in sitting still for a pic. I probably took atleast 20 pics of him before I got 2 that I even considered saving.

As for the later bow pics - they were taken probably 2 hours later when the tank cleared up.
Greggz and Maryland Guppy like this.
To view links or images in signatures your post count must be 10 or greater. You currently have 0 posts.

Greggz, ipkiss and Immortal1 like this.
To view links or images in signatures your post count must be 10 or greater. You currently have 0 posts.
Growing is not that difficult.
Maryland Guppy is online now
Quote Quick Reply
post #850 of 850 (permalink) Old Yesterday, 06:18 AM
ipkiss
Wannabe Guru

It would seem my wife has a pretty good sense of humor...

the crazy part is.. if u ignore the fish and squint a little, it really doesnt look out of place!
Greggz, Maryland Guppy, Immortal1 and 1 others like this.
To view links or images in signatures your post count must be 10 or greater. You currently have 0 posts.
ipkiss is online now
Quote Quick Reply