I'll be using this thread for update and as history / log

I had a 150g reef tank with SPS about 6-7 years, maybe more, which I had to shut it down due to leaks and eventually lost everything. I had it at one point it basically running itself with automations setup and very well balanced so I did't had the need to do water change.

Now coming back to fish tanks again, I figure I'll try something new. since I have lots of equipment from the reef days so I saved a quite a bit here. My controller is Aquacontroller II from Neptune Systems, which controls x10 modules, this is like a grandpa controller but it still works for me. I also have PH probe for Calcium reactor control, however I brought a new lab grade probe since it was reading ph wrong by about 1 degree. figured it was defective from drying out, but the new probe was still doing the same even after recal with hanna solution 3+ times. ended up buy another 2 meter to verify PH reading.

Had a CO2 system with electronic regulator and a 10lb tank, traded in for a 5 lb since I won't be needed nearly as much as the reef tank i had. used to refill about 1-2 month. Lets see how long this lasts in the 12g planted tank runnign 24/7.

Here are some of pictures of the tank from original setup, I'll post more recent ones later.

Maybe a High Tech planted with high grade CRS tank is a little too much for me just coming back to the hobby and no prior knowledge about planted tank or shrimps, but I like challenges and hope I can find a good balance to keep them both strive... soon... If anyone with knowledge of this setup, your advice is greatly appreciated.

Here is when its almost filled in a month later

Harrisgo, the lights i got from Amazon. here is the link:
http://www.amazon.com/Off-road-Headlight-Driving-Mounting-Bracket/dp/B00G620ZVU/ref=sr_1_3?s=automotive&ie=UTF8&qid=1421195471&sr=1-3&keywords=2x+4%22+18w+6+Cree+LED+SUV+Off-road+Boat+Headlight+Spot+Driving+Fog+Light+%2B+Mounting+Bracket
I remove the reflectors to have a good spread. Here is the picture. I've a value for PAR for these lights as well if you like. 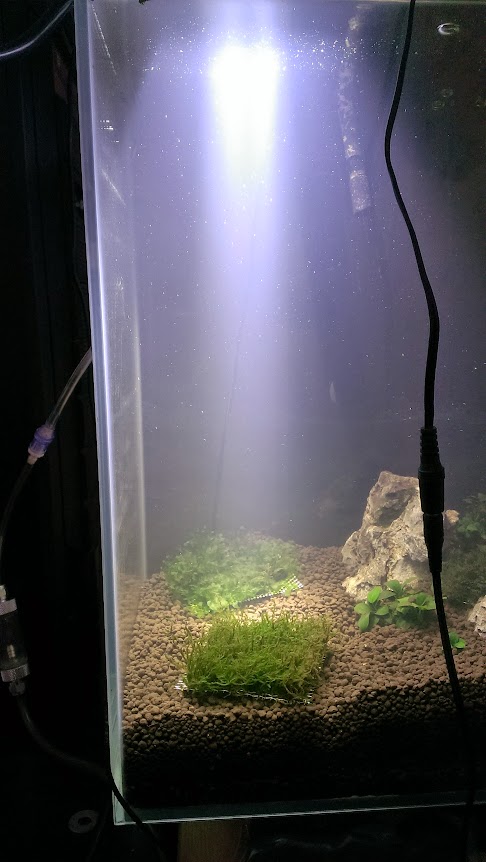 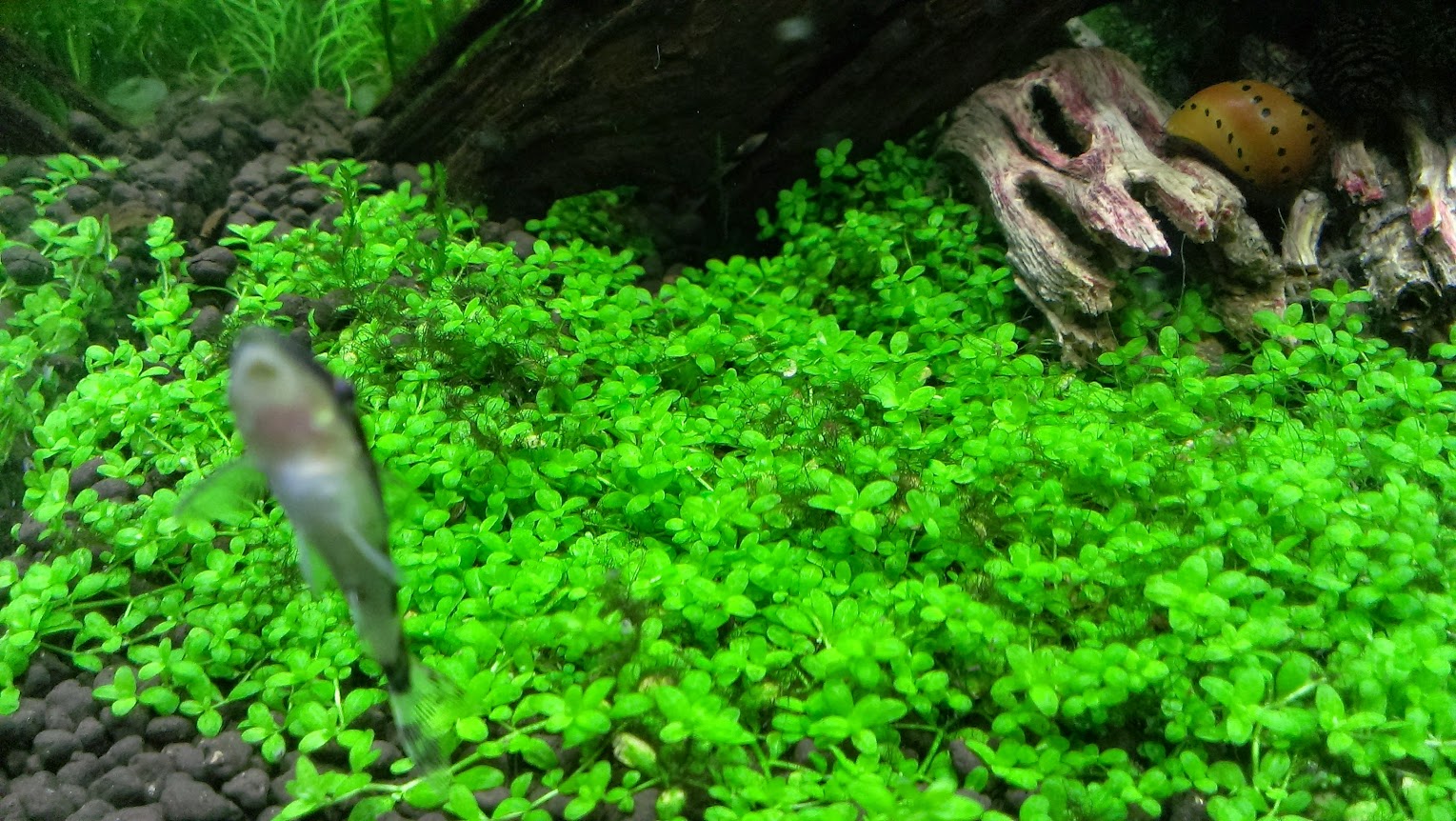 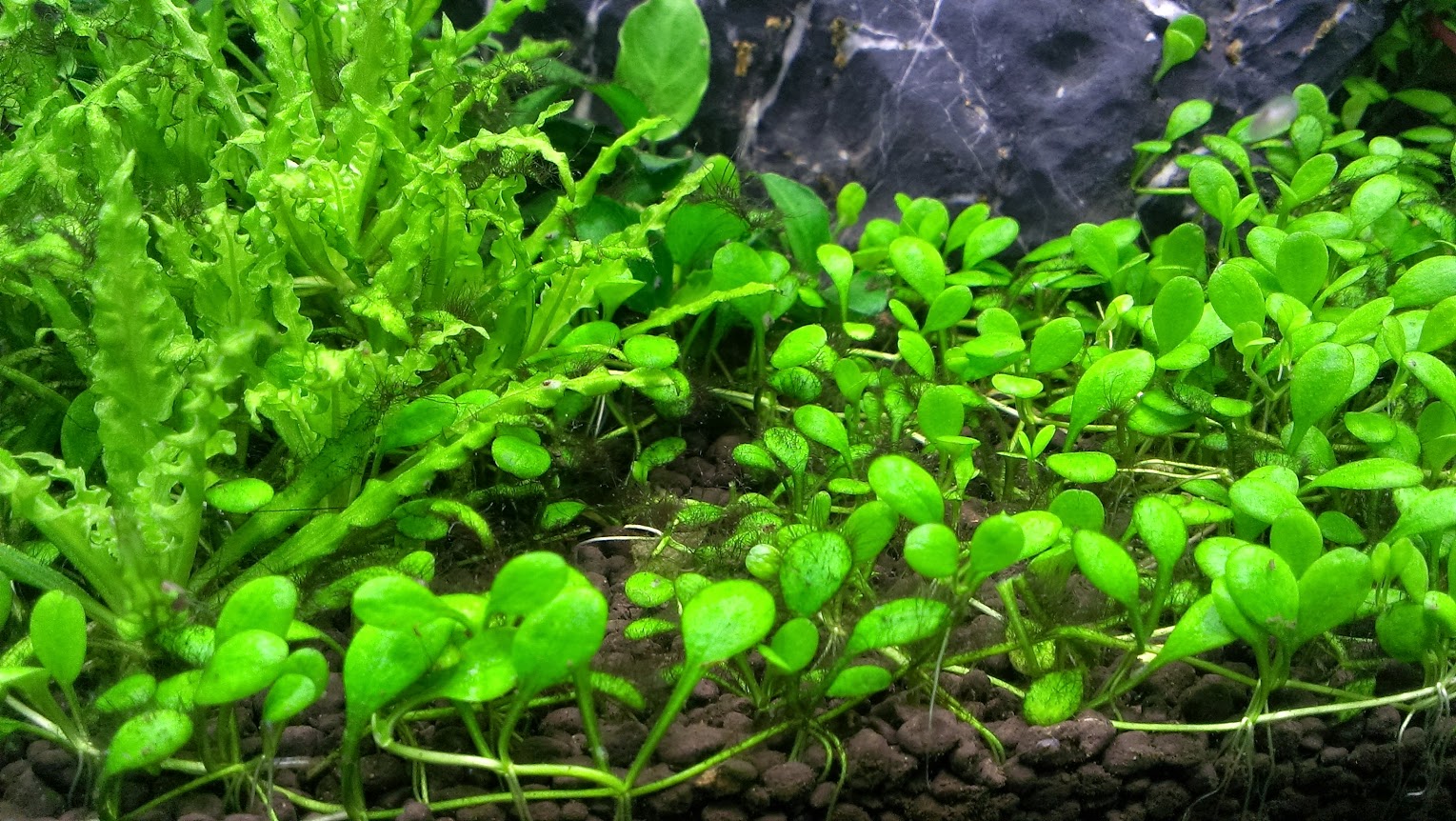 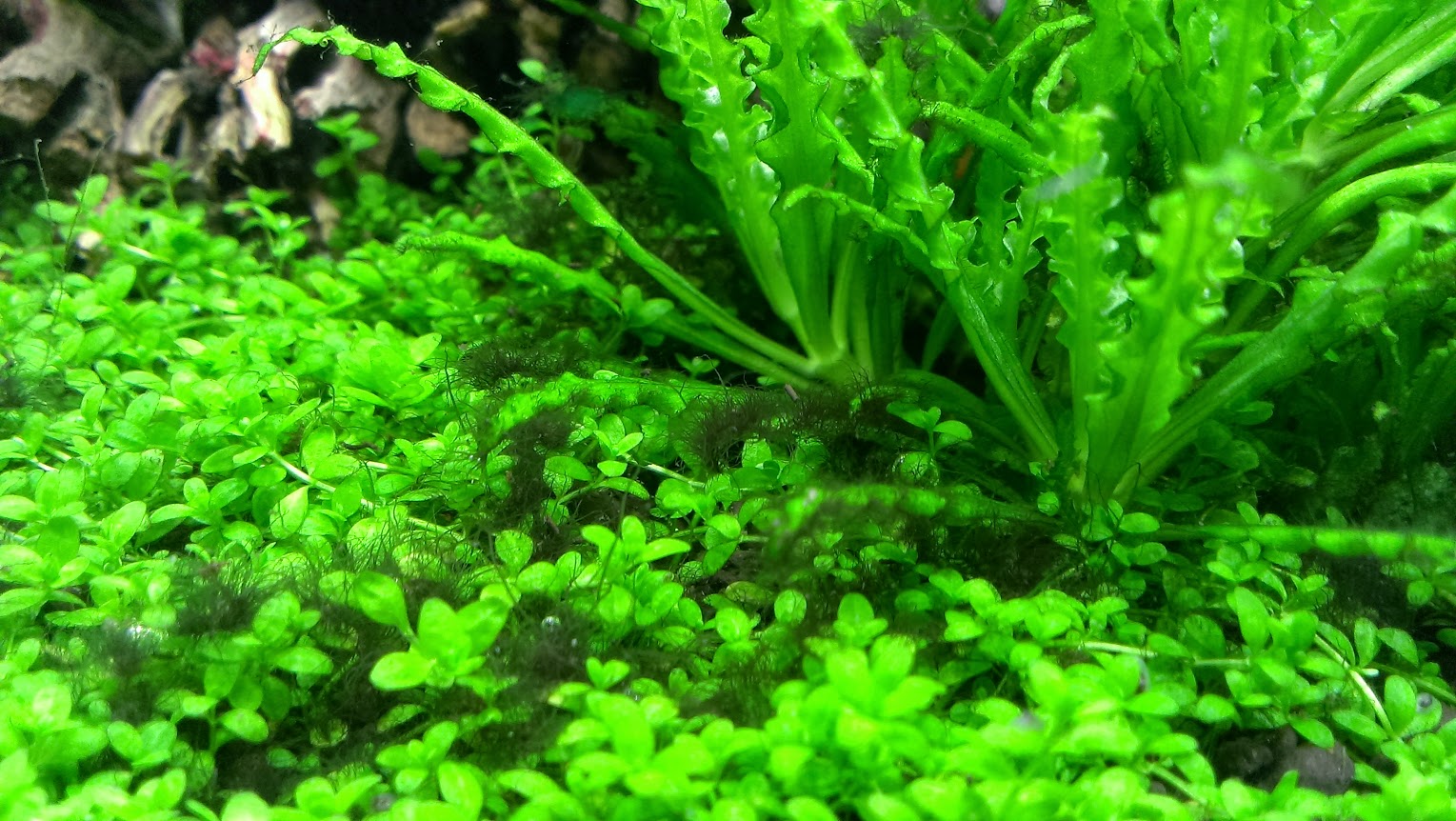 and just about everything else 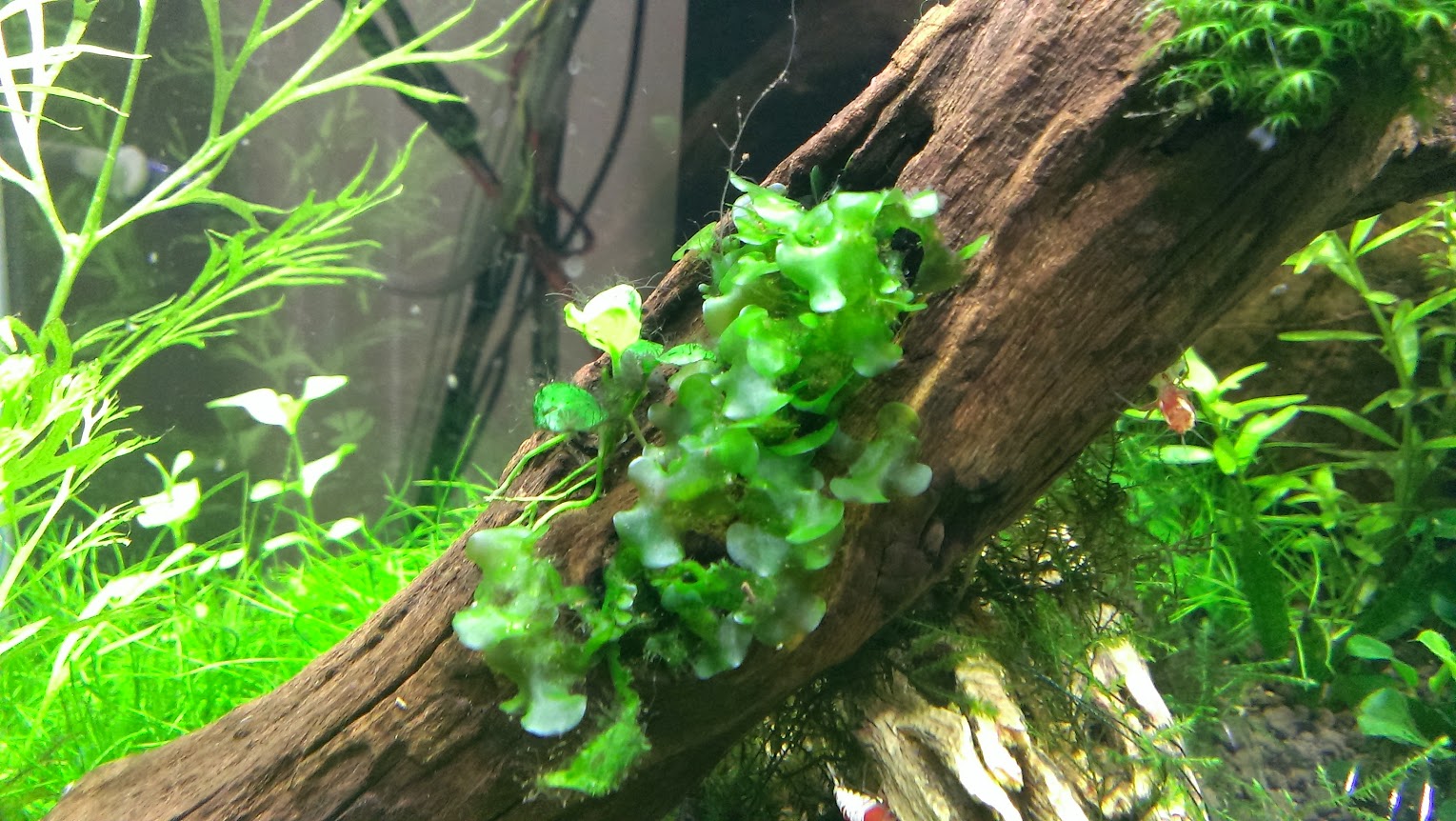 Tried increase CO2,, fert etc... end up killing half of my CRS.
I tried different methods to achieve 30ppm. Big mistake with PH/KH chart. This could be due to my kH is really low. ~1
I should've stopped when my Drop checker turned yellow even thought PH/KH chart shows that I could go lower.

As you can see, spots treated turn pink/red and eventually white then melt away. 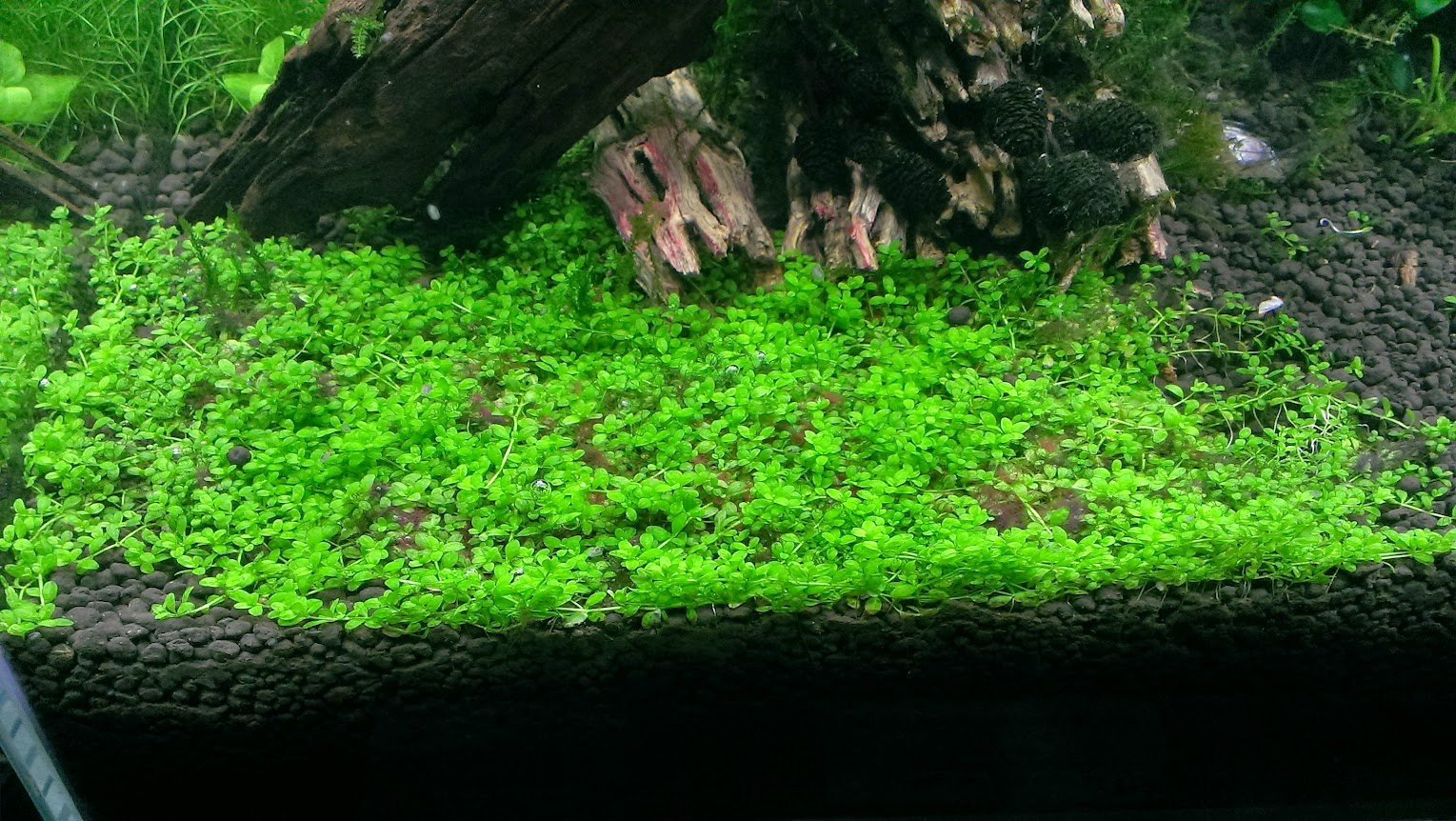 Ripped out most of plants that was badly infected. 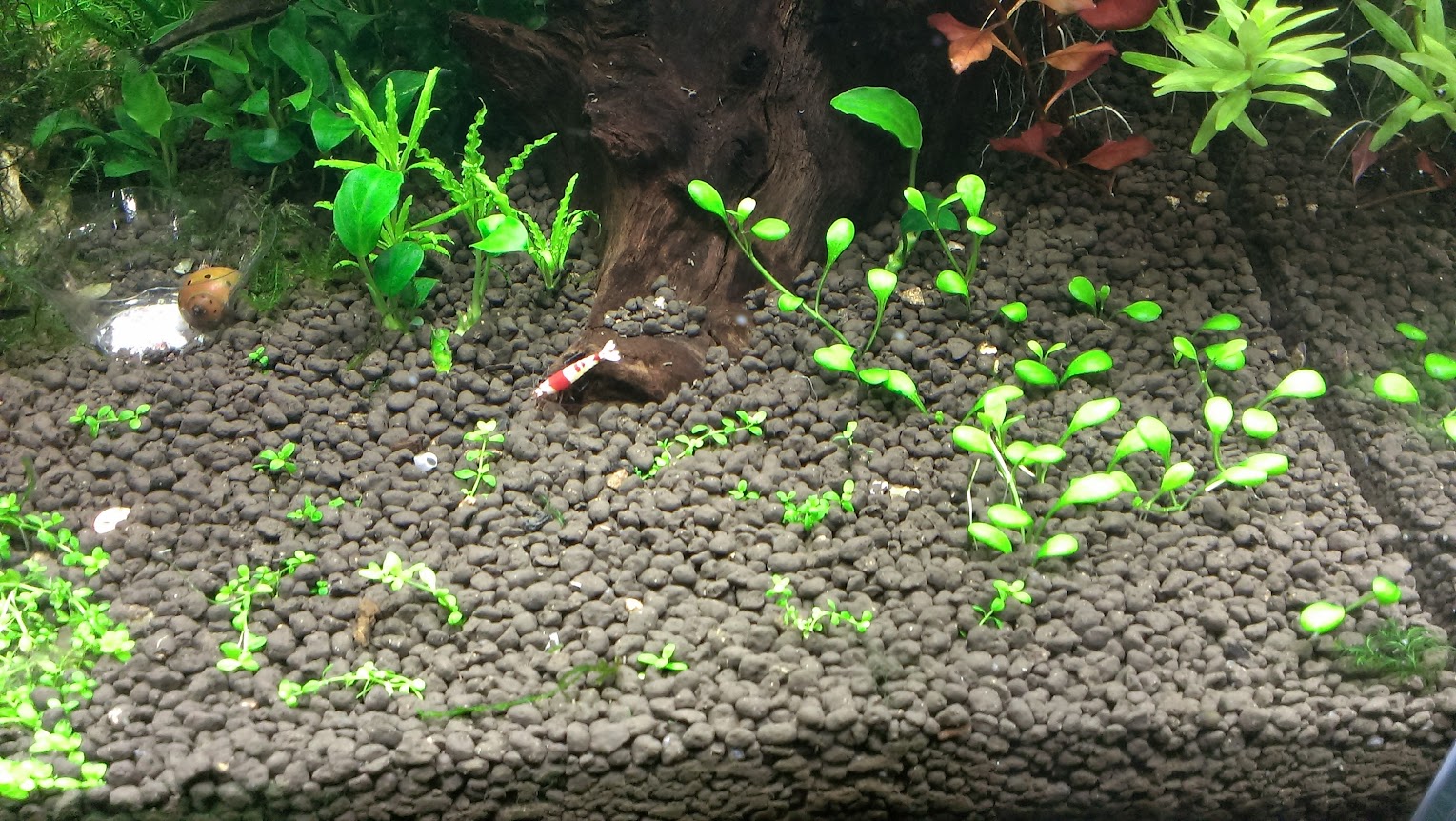 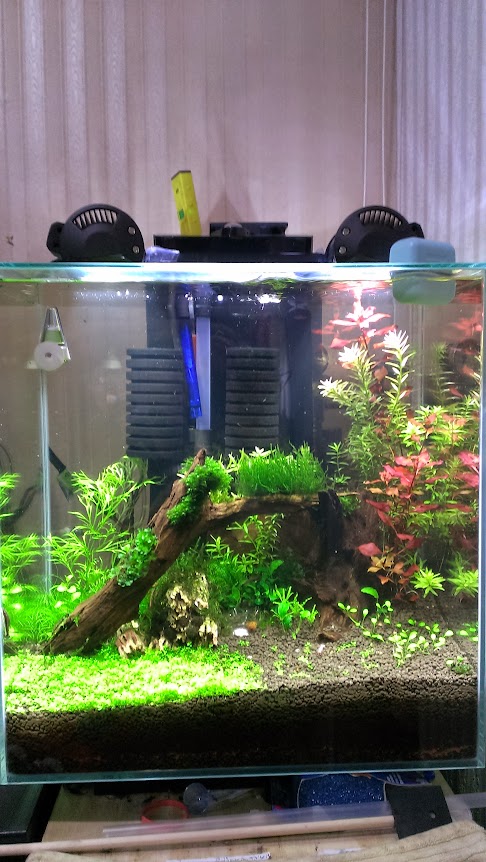 Instead of risking killing fish and shrimp, I moved them to my other tank, its a regular 10G tank(It's always a good idea having another tank set up in case something like this was needed. I actually had BBA on my 10g tank as well, so I tested on 10g first to see how well this works. 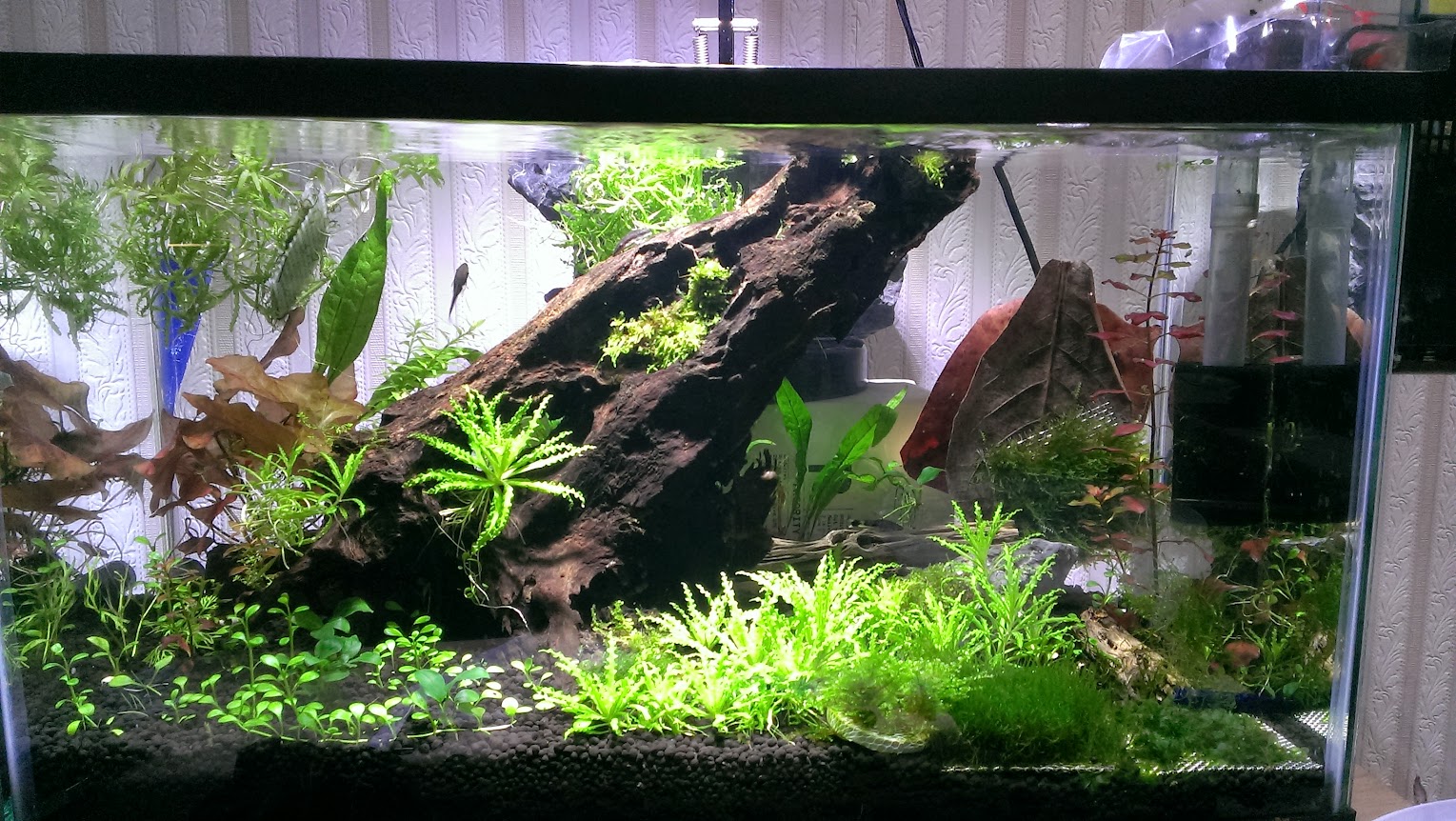 After 1-2 punch on my main tank. which effectively wipe out all known algae, it also damaged HC, and this one (not sure the name, let me know if you know what its called).
Picture taken 1/6/15 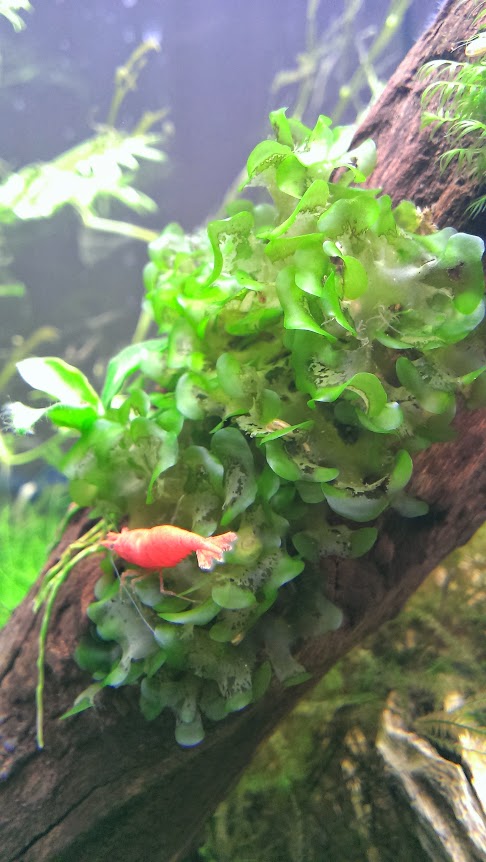 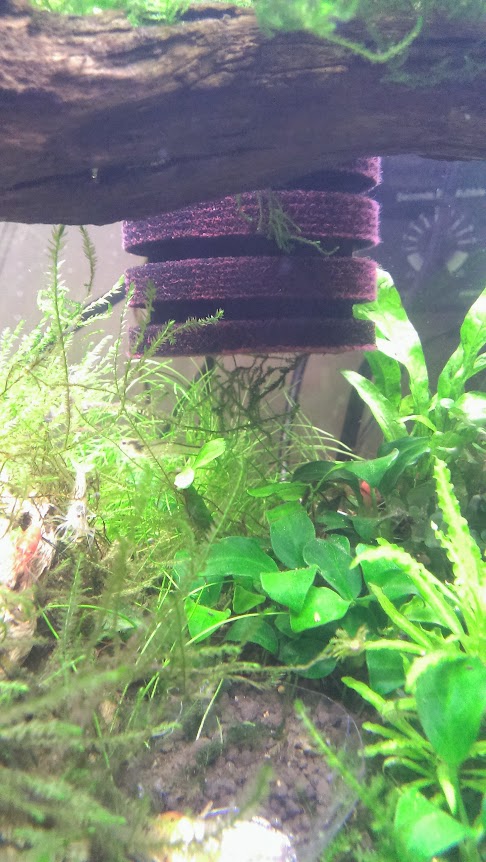 Another pic on driftwood 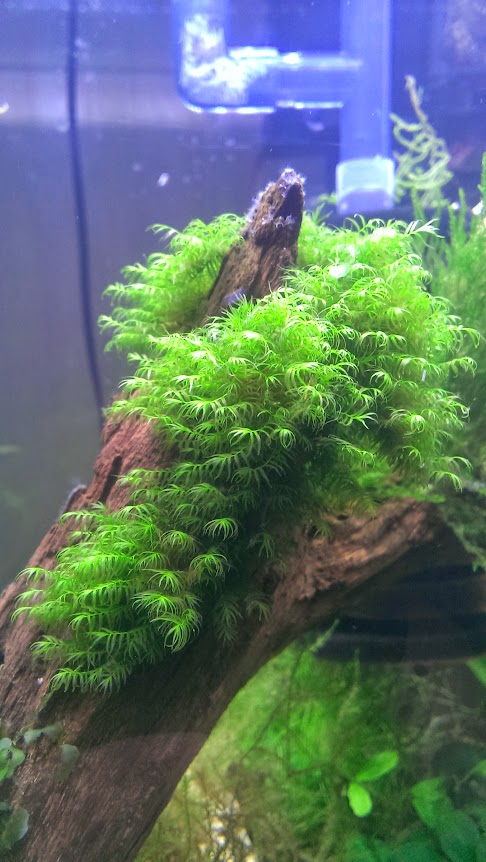 I would like to know the PAR values for those LEDs if you dont mind.

It tooks about 1 week to really recover, since I have HOB filter (with tiny sponge for bio filtration perhaps) the tank seems to went into mini cycle. I don't have ammonia spike or any ill symptoms, just the water smell different for about a week. Everything was great, no more BBA, its like running a "System Restore" on your computer back to the date before the virus infection. Plus I have Purigen, not sure if that makes any differences, but it probably prevented an actual mini cycle.

However like i stated above, some plants didn't take it too well. 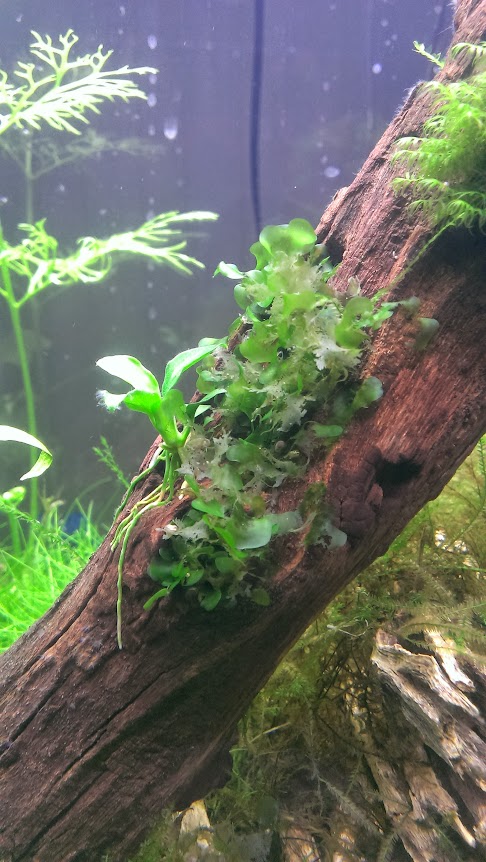 While others cleaned up really nicely. 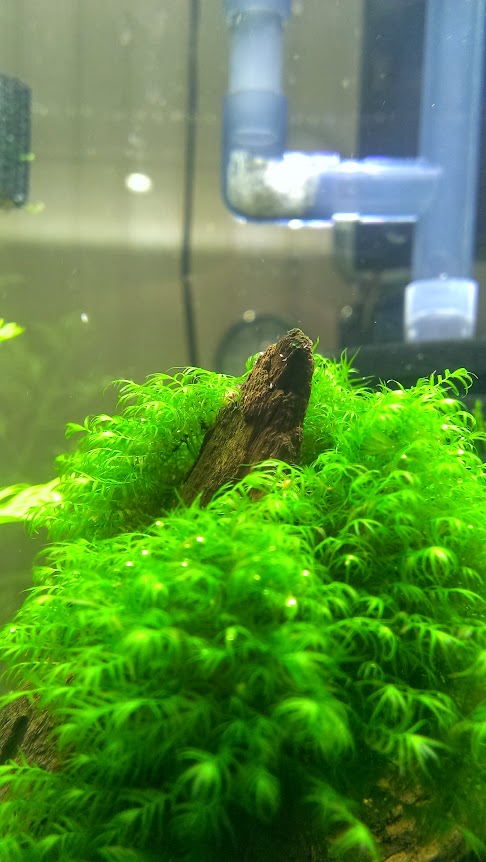 
(View User Tanks)
PTrader: (0/0%)
Join Date: Oct 2014
Location: United States
Posts: 10
Removed the top glass
Like others with Fluval Edge, the top glass became a real pain in the you know what, so I followed a direction on Youtube and removed it. Much better now when it comes to trimming, also you have the whole back area for probe,heater and stuff (without having them sit right in the middle of the tank.

I've also upgraded (sort of) my lighting to Finnex Planted+. The red spectrum is definitely higher than my old ones, but not much. however, PAR value was lower. 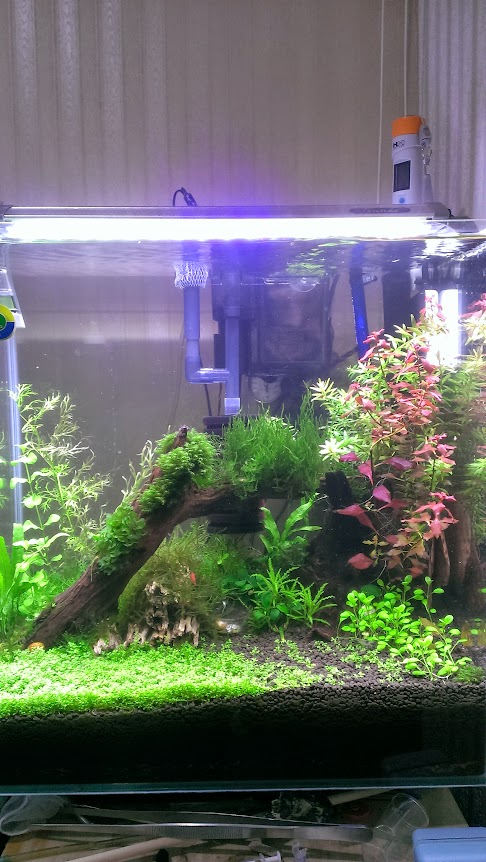 
(View User Tanks)
PTrader: (0/0%)
Join Date: Oct 2014
Location: United States
Posts: 10
PAR Reading comparison
As requested here are the picture of actually reading using Seneye. Based on my research, there are few people that compared Seneye with Apogge par meter with almost identical result, so if Apogge is your baseline, Seneye is just as accurate.

Note: these reading were taken after top glass was removed. I built a mini fixture which raise it (CREE) about 3" above water.

PAR reading was done with probe directly under the light. 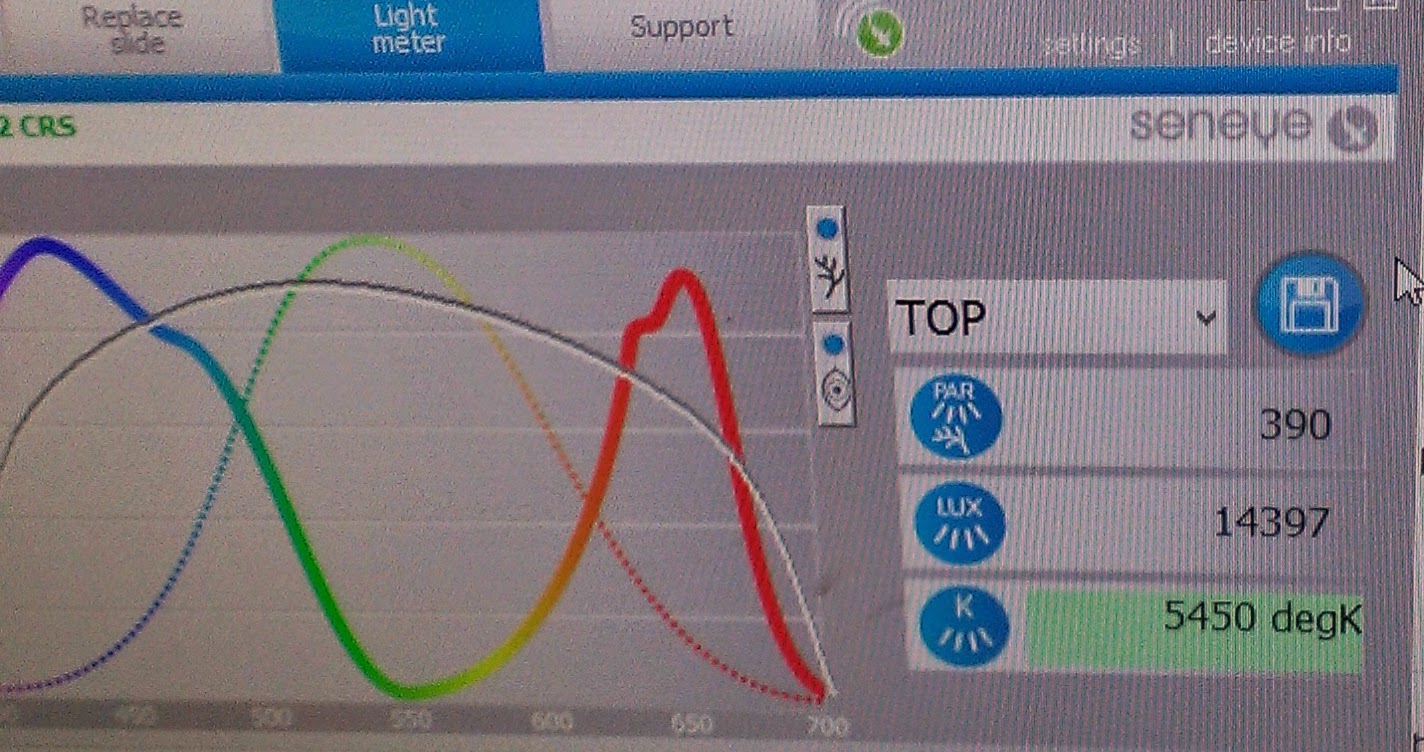 Now the Finnex Planted+ PAR reading
Note: the fixture came with mount, which was just about 1" above water. 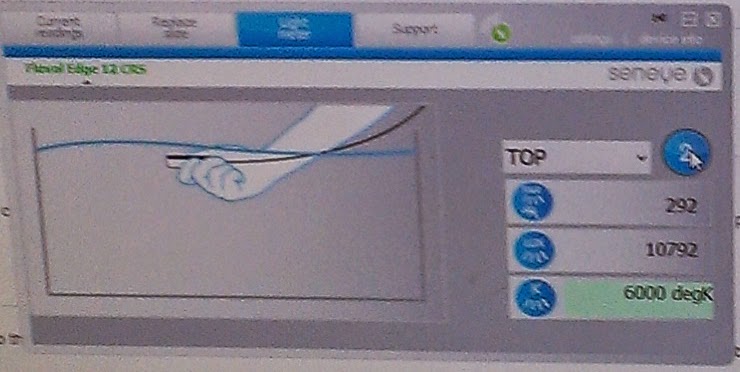 Note the red spectrum is higher on the Finnex planted+, however they have lower PAR value. BUT, the CREE Lights are 18 Watts/ 32 Watts total (PAR reading was done right under one light) , while Planted+ only uses 11.9 watts, that's pretty amazing. not to mention it runs alot cooler.

I only had the light for about 2 weeks or so, plus the 1-2 punch was just performed so growth differences might not be accurate since some plants might still be recovering, however my plants are pearling daily, so I'm happy. Based on what I've read Tom Barr states that with PAR value of 50 at substrate level, you can grow just about anything, HC included, given that CO2 is ~30ppm and firt are suffice. There's another thread stated that's the PAR value of most tanks at ADA shops are lower than most people expected, this information was from few years back so I'm not sure if its still valid. However, IME they doing just fine.
Last edited by jasonchi; 01-14-2015 at 05:48 AM. Reason: spelling correction
jasonchi is offline
Quote Quick Reply
post #11 of 12 (permalink) Old 01-14-2015, 06:28 AM
burr740
Planted Tanker

Thanks for the info. Looking forward to see the furutre progress.

Took me awhile to get it, there was only two in LFS and some issue with algae. 1-2 punch dipping with excessive dosage, because I really don't want to deal with algae with my tank now, now its 100% algae free.

After dipping, I trimmed the browned leaves and removed 1/2 of root. Minutes after introducing it to the tank, shrimps (CRS,Amano, Fire Red shrimp) gave me a hand on cleaning it up. I should also mention that they do a much better job than I ever could cleaning algae off leaves.

If you click to enlarge the pic, you'll see lot of algae on it, hope my dipping method killed them off. I guess I'll know for sure in the few days. 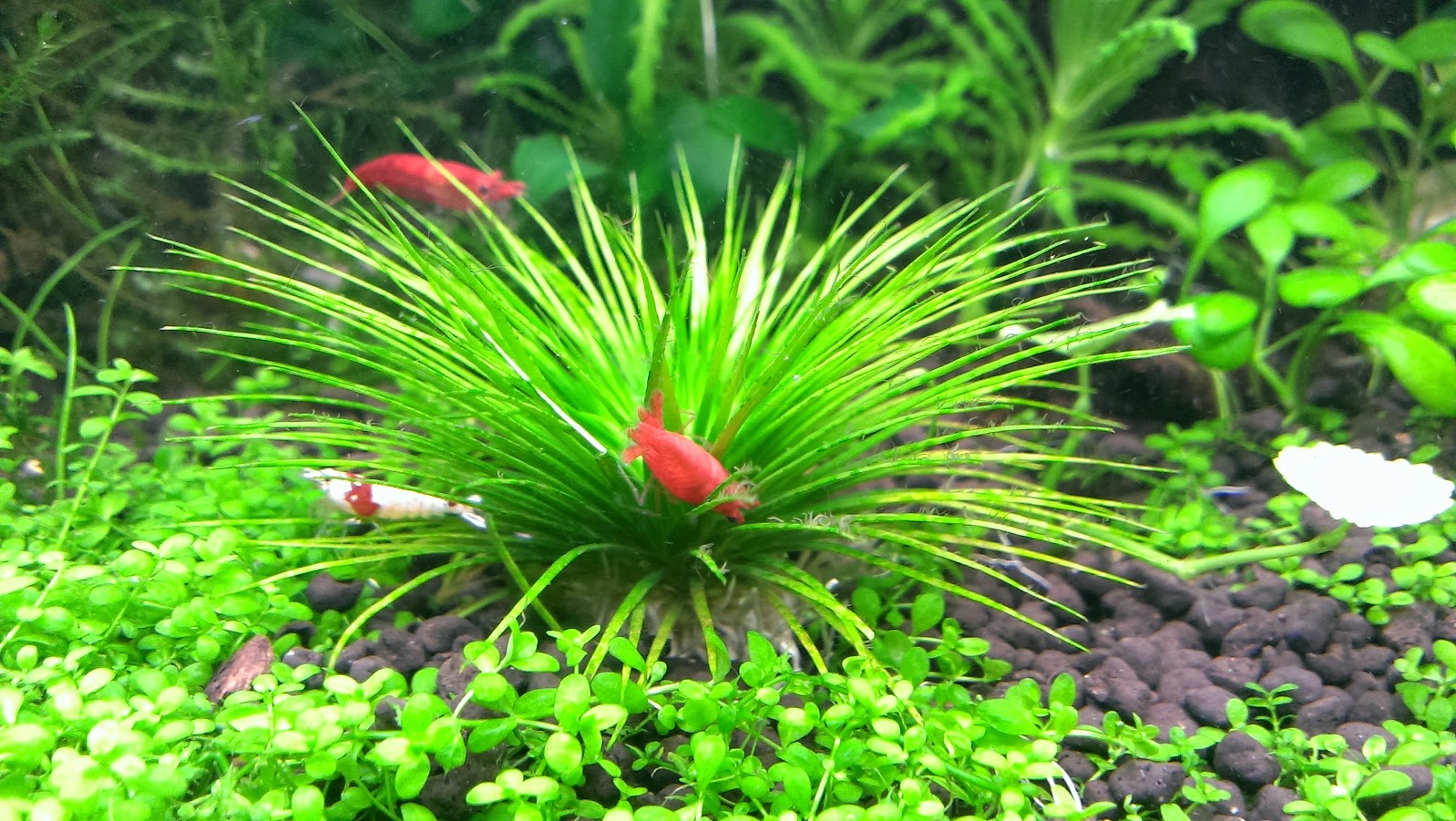 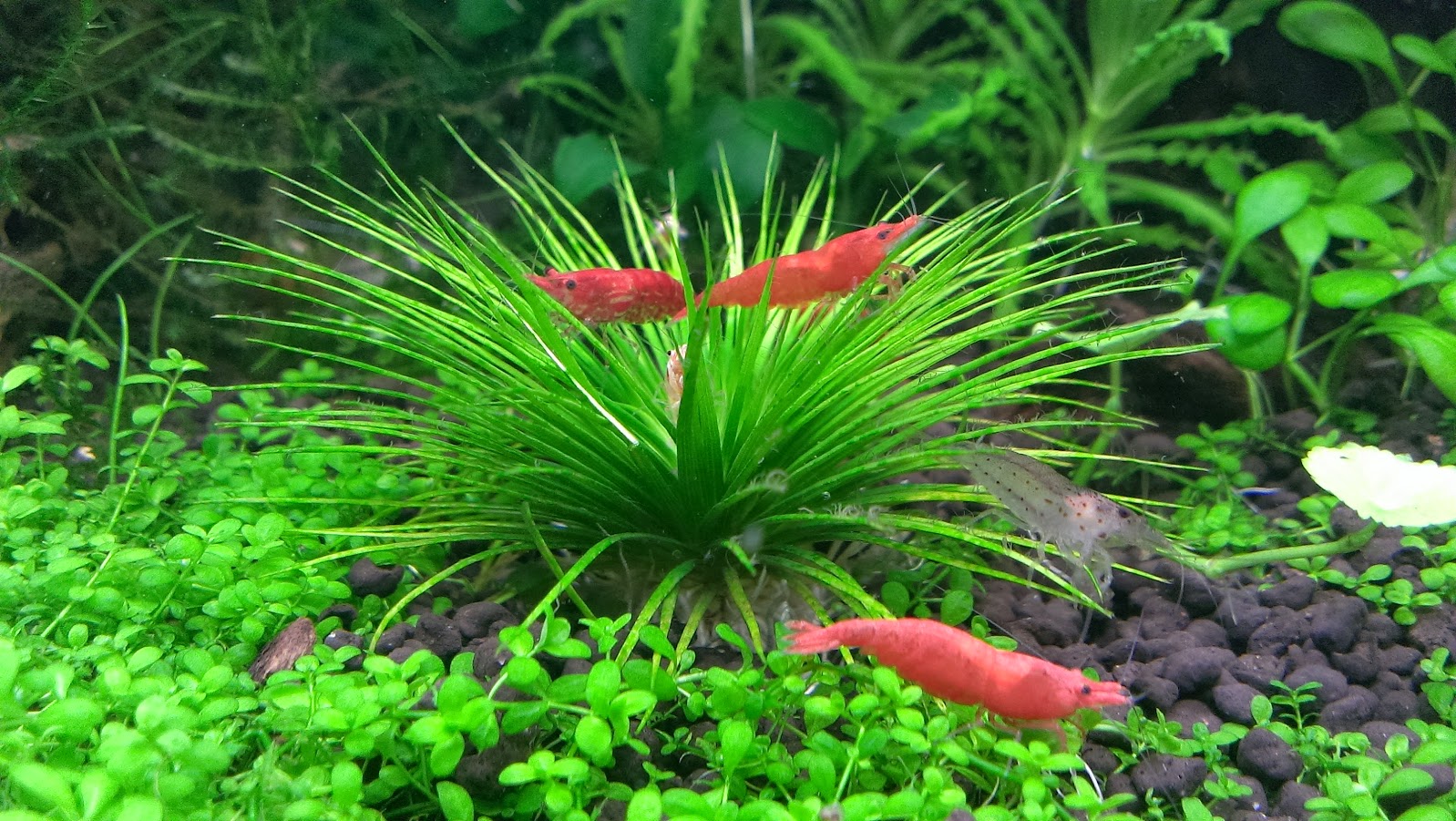 Full shot of lower half of the tank. Shrimps working on the new plant: Eriocaulon Cinereum 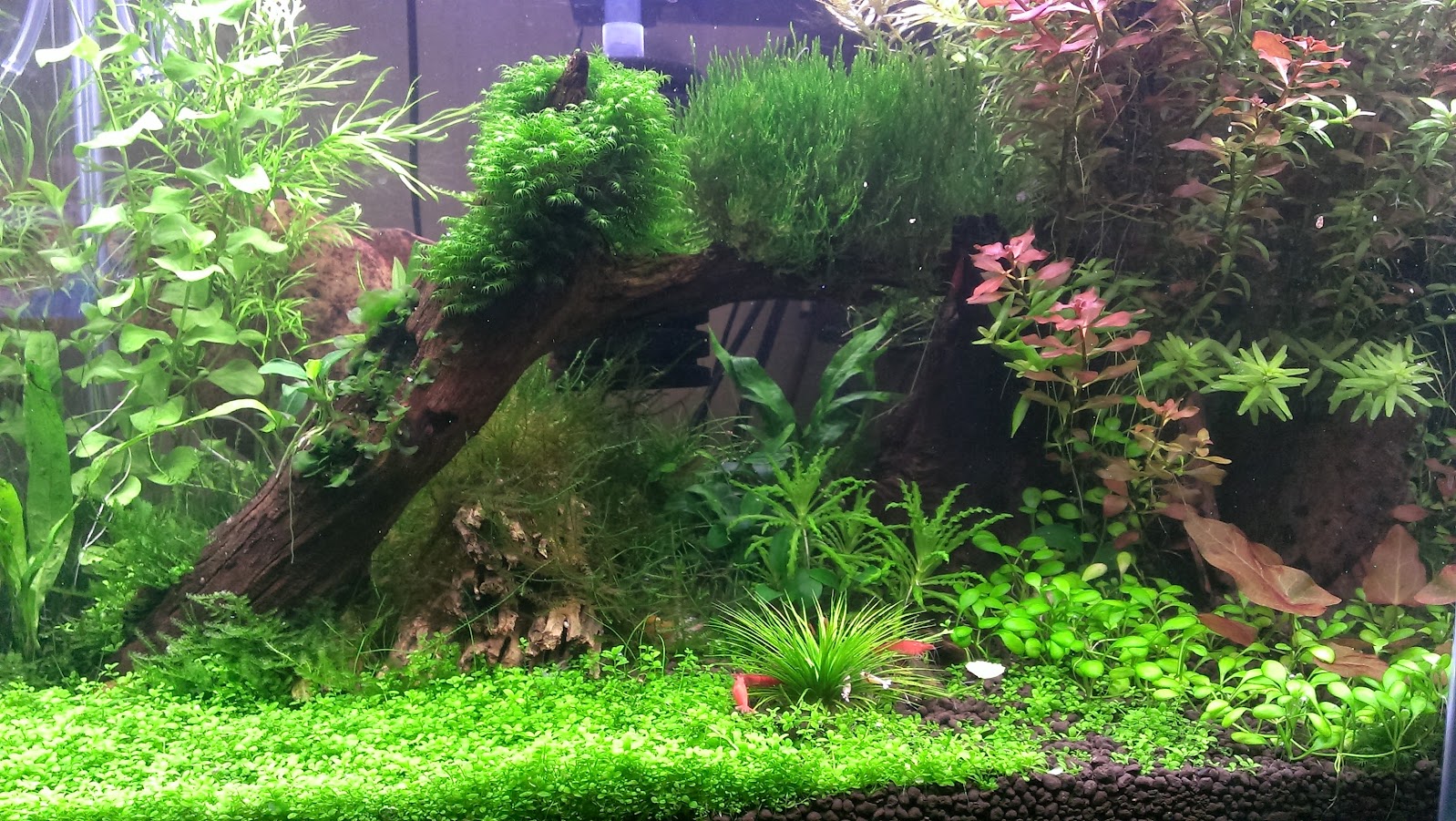