(View User Tanks)
PTrader: (0/0%)
Join Date: May 2014
Location: Northeastern USA
Posts: 17
5g DSM shrimp tank
~ UPDATE 21 Dec. 2014 ~
No further issues with mold. HC is browning slightly. Glosso is doing well but I haven't been keeping up with trimming so it's gone up instead of over. A. reineckii has new leaves. All are rooting. 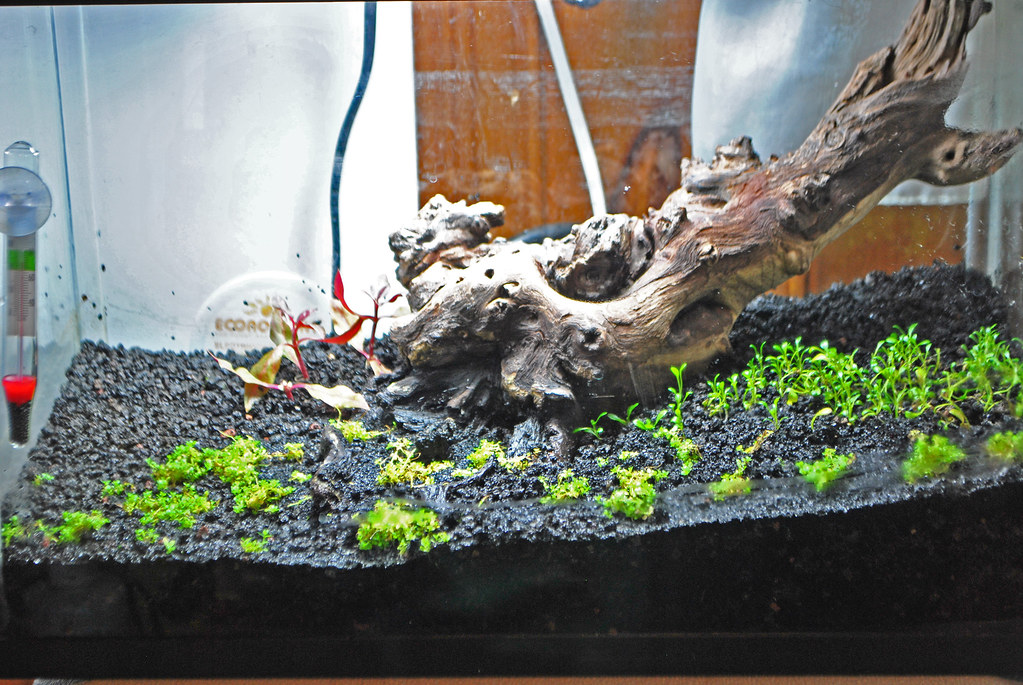 After a failed first attempt, I took the tank apart and am now trying a DSM. I hope to grow out a decent carpet of dwarf baby tears, though I'm still waiting on the HC to arrive. I'm fairly new to keeping a planted tank, so any and all advice is appreciated, especially in regards to DSM... and all of the questions I have down below

Current plants:
-Rosette sword
-Dwarf sag
-Glosso
-Brazilian fern (runner from a huge one my mother has sitting around, it's fairly beat up but I tossed it in anyway)

Waiting on:
-HC
-Marsilea quadrifolia
-May add DHG as well if I find it at Petco.

Substrate is Eco-Complete with a bit of black sand on top and a total of 3 Flourish root tabs. Should I crumble them up or will they do a good enough job jusr sitting in there? I need to put more sand around the glosso.

I added a bit more water and there's finally some condensation now (16h after setup). The rosette sword and dwarf sag were looking a bit shriveled and brown on the edges, which concerned me. Someone suggested putting a bowl with a wet sponge in there, which I think I'll try since I've heard of people getting mold/fungus with stagnant pools of water.

Lighting is a 6500k 60W equivalent flourescent bulb in an 8" reflector sitting on the glass top (probably 8" from substrate) on a 14h photoperiod. Is that too much? I have a 40W equivalent I can switch it to.

The glosso is turning a bit yellowish in areas with some brown spots. Too much light? Or could it be due to the lack of humidity overnight? I'm spraying plants as needed with distilled water. Should I put something (Flourish Comprehensive?) in the water to make it a nutrient spray?

The room temperature stays between 68 and 72 degrees, as does the tank. Is it necessary to heat the tank further? If so, what would be the cheapest way? Working with a college student budget here

(View User Tanks)
PTrader: (6/100%)
Join Date: Aug 2012
Location: South Hill, WA
Posts: 259
Quote:
Should I crumble them up or will they do a good enough job jusr sitting in there?
Did you place them below the plants? If so they'll be fine.

Quote:
Someone suggested putting a bowl with a wet sponge in there
You'll be fine with the water in the substrate. Make sure that the water is up to the lowest part of the substrate though. You're not getting condensation because of the temperature. I buried a small submersible heater in the substrate to keep the correct temp in the soil and steam up the tank. It works perfectly. Spray water around the top rim of the tank and cover it in plastic wrap for an air tight seal.

Quote:
Lighting is a 6500k 60W equivalent flourescent bulb in an 8" reflector sitting on the glass top (probably 8" from substrate) on a 14h photoperiod. Is that too much?
That's the going rate for lighting on the DSM.

Quote:
Too much light? Or could it be due to the lack of humidity overnight? I'm spraying plants as needed with distilled water. Should I put something (Flourish Comprehensive?) in the water to make it a nutrient spray?
It's lack of humidity and adjusting to growing out of water. Making a nutrient spray would help a lot right now. With distilled water and an inert substrate the plants aren't getting any nutrients. Their roots have not grown down to the tabs yet.

I'm also currently in the process of using the DSM with my 30g Stone Roots build.
Brandon

To view links or images in signatures your post count must be 10 or greater. You currently have 0 posts.
BHolmes is offline
Quote Quick Reply
post #3 of 8 (permalink) Old 12-09-2014, 08:01 PM Thread Starter
NomNomPony
Algae Grower


(View User Tanks)
PTrader: (0/0%)
Join Date: May 2014
Location: Northeastern USA
Posts: 17
Update
Thanks for the advice, BHolmes! I do have Eco-Complete; the sand is a thin layer only where necessary to help keep the tinier plants in place. I'm ordering a mini heater to bury in the substrate soon, but the tank actually did build up a decent amount of humidity after a few days. I spray it daily or every other day and there's plenty of condensation on the glass.

Still waiting on the HC. The seller went on vacation shortly after I placed the order and I must have missed the cutoff. It should be shipping in the next few days, fingers crossed!

The glosso seems to be doing pretty well to my naive eyes. Most plants are putting out one or more runners, and leaves are a nice bright green.

Dwarf sag doesn't seem thrilled, though. I just trimmed the dead ends off.

Since the dwarf baby tears has yet to arrive, I'm thinking of redoing the scape a bit. I have this piece of mopani wood from before I redid the tank.....

I think I may partially bury the big end in the substrate and have the tapered end leaning up against the right side of the tank, at an angle. Rosette sword on the partially buried end, HC in front, glosso on the left, marsilea quadrifolia on the right and behind the wood. Perhaps I'd add moss (maybe flame moss) on the log and some hairgrass to the background, but not until after submersion.


(View User Tanks)
PTrader: (3/100%)
Join Date: Jul 2007
Location: Gallatin, TN (Near Nashville)
Posts: 54
Be careful about the amount of water in the substrate. I had a bad "spider-web" algae outbreak that caused quick death of many plants due to excess water. I had water just to the top of the substrate. As long as the humidity stays high, the height of the water doesn't need to go all the way to the top of the substrate. Just me lesson learned.
To view links or images in signatures your post count must be 10 or greater. You currently have 0 posts.


To view links or images in signatures your post count must be 10 or greater. You currently have 0 posts.
cashman is offline
Quote Quick Reply
post #5 of 8 (permalink) Old 12-09-2014, 10:10 PM Thread Starter
NomNomPony
Algae Grower


(View User Tanks)
PTrader: (0/0%)
Join Date: May 2014
Location: Northeastern USA
Posts: 17
Cashman, I'd been wondering a bit about that. When I was having trouble with humidity at the very beginning a few people told me to add more water (not flood, just add a few cups) but I hesitated because I was concerned about algae, fungus, and other tank-murdering horror stories, lol. Now that you mentioned it, I'm very glad I didn't add more and I'll siphon up a bit of the water!
NomNomPony is offline
Quote Quick Reply
post #6 of 8 (permalink) Old 12-15-2014, 11:30 PM Thread Starter
NomNomPony
Algae Grower

Finally received my HC. Yay! It's all planted, as well as a few stems of Alternanthera reineckii mini. I misread the ad and wasn't expecting it. The last week I've been thinking of what I could put in to add some red, so I was tickled pink when I unwrapped it!

I'm considering this the "real" start of my tank.

In somewhat unrelated news, the Amazon frogbit I have in a 1g bowl is exploding. Had to take about half of it out and trim the roots... some were nearly reaching the substrate. It's nice to know at least 1 plant can flourish under my care, lol! The myrio wasn't doing too bad either, had to trim it back a bit.
NomNomPony is offline
Quote Quick Reply
post #7 of 8 (permalink) Old 12-21-2014, 09:45 PM Thread Starter
NomNomPony
Algae Grower


(View User Tanks)
PTrader: (0/0%)
Join Date: May 2014
Location: Northeastern USA
Posts: 17
1 week in (a day off, but close enough). Most of the change is from things shifting when I moved the tank home for winter break. I mvoe some HC a bit as I'm figuring out where to fit the filter, heater, and co2 diffuser. No dieoff of the HC so far, and there has been a small amount of growth. The glosso is doing great... I've heard some say it does not do well in DSM setups, but if you compare the difference a week has made you'll see it's grown quite a bit. 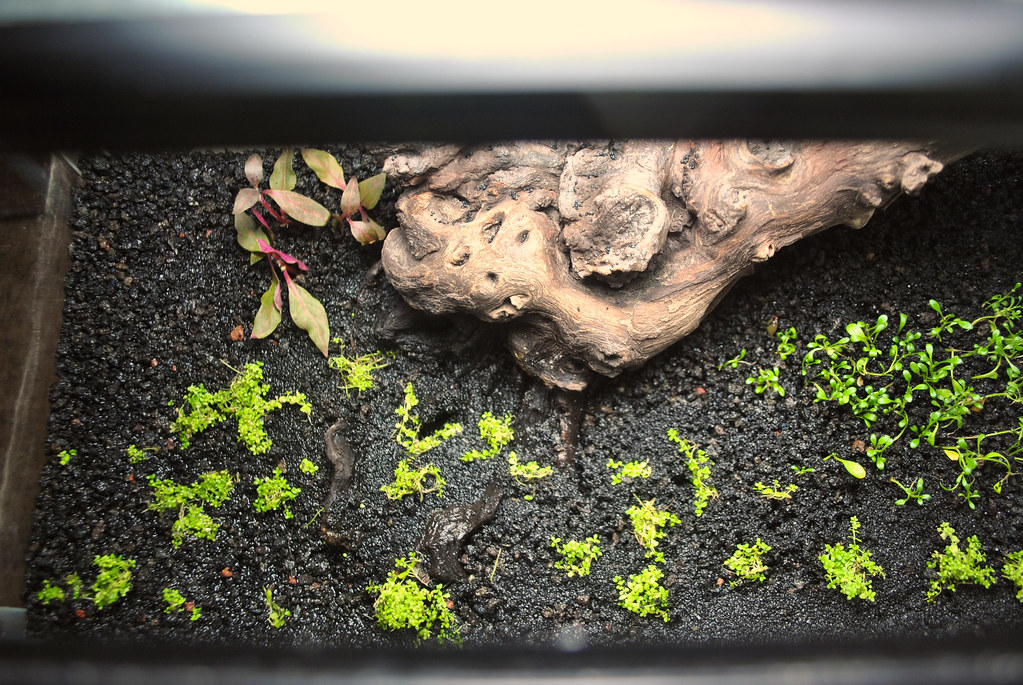 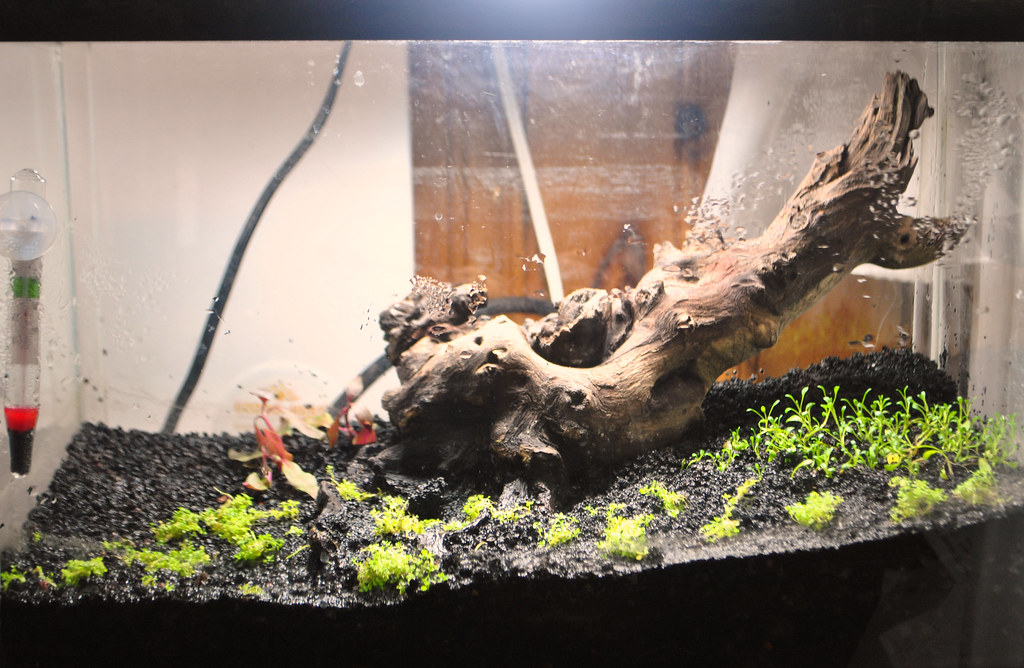 I didn't open the top up to air out at all yesterday, and this morning I found what seemed to be a dusty mold growing on the driftwood. No signs of any mold/fungus on the HC, thank goodness. I've added more Excel to the solution I spray the tank with, and doused the wood in it. I think I'll try to leave the lid open for 10 minutes a day now instead of just opening it up and blowing air in.
Any other suggestions?
NomNomPony is offline
Quote Quick Reply
post #8 of 8 (permalink) Old 01-04-2015, 11:25 PM Thread Starter
NomNomPony
Algae Grower


(View User Tanks)
PTrader: (0/0%)
Join Date: May 2014
Location: Northeastern USA
Posts: 17
About 3 weeks in now. The glosso tends to want to grow up and I haven't been keeping up with trimming and replanting as I should. The dwarf baby tears started showing some browning roughly a week ago; I think it's because I was misting less often. Not much change at all from the last update. The a. reineckii mini is doing well. 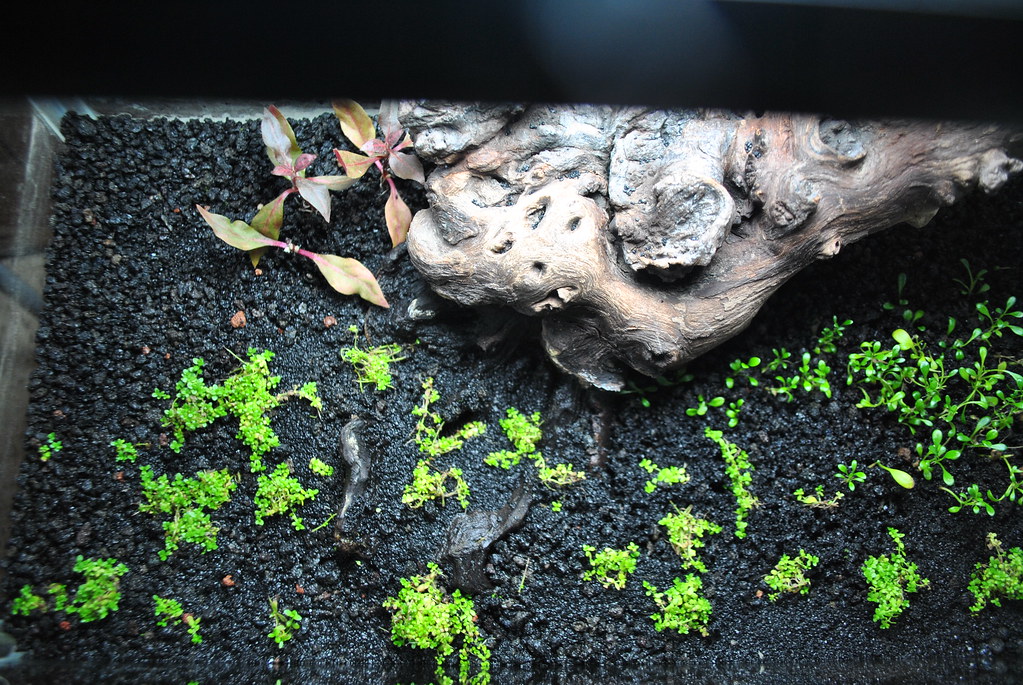 The lack of change is a bit disheartening, but I've read that HC often spends the first few weeks establishing its roots system before spreading. And, indeed, some parts are definitely rooting.... 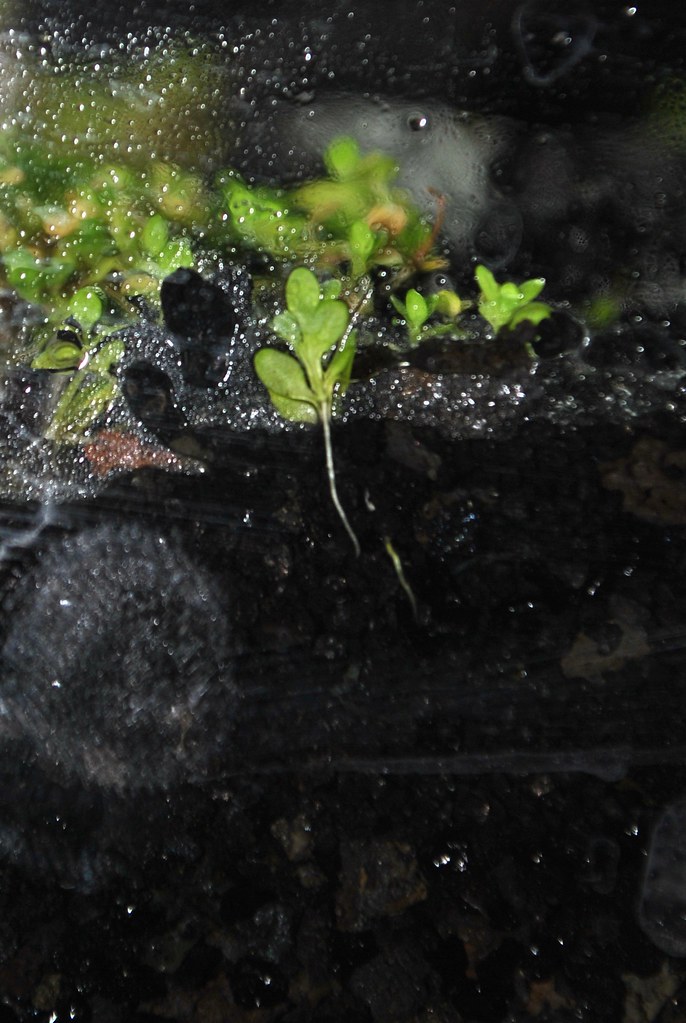 There's a piece of glosso that I must have accidentally buried when rescaping. In any case, it's doing fine.... So I imagine the rest whose roots I can't see are doing even better 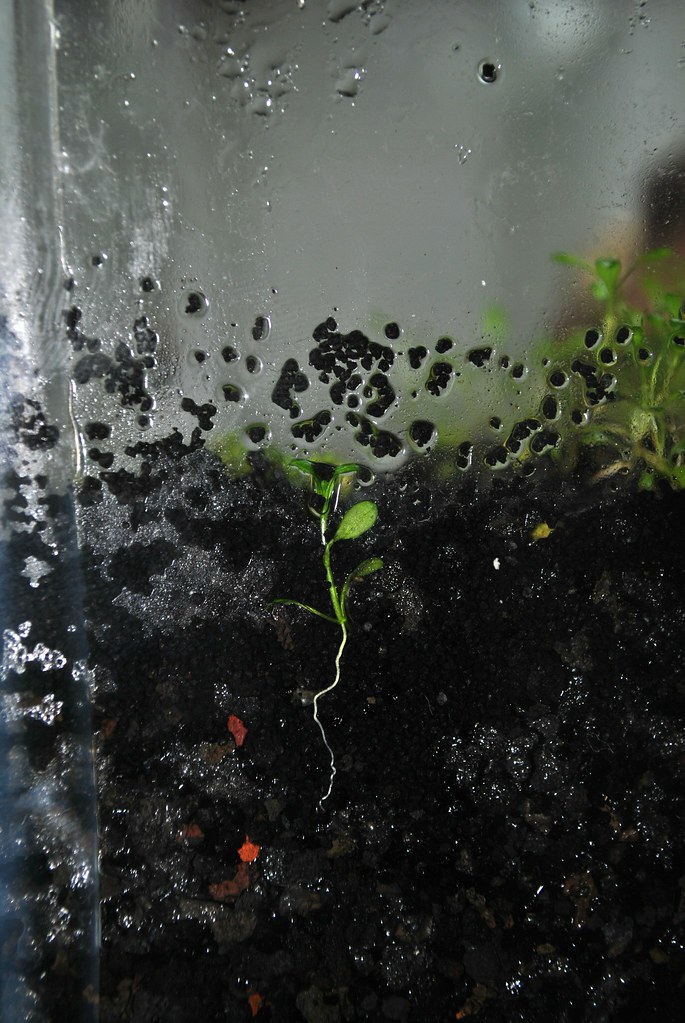 I'm debating what to put behind the driftwood. There's some green myrio sitting in a bowl I could use, as well as some brazilian pennywort. The m. quadrifolia isn't doing too well... Maybe one stem is growing more leaves; the rest have browned and died