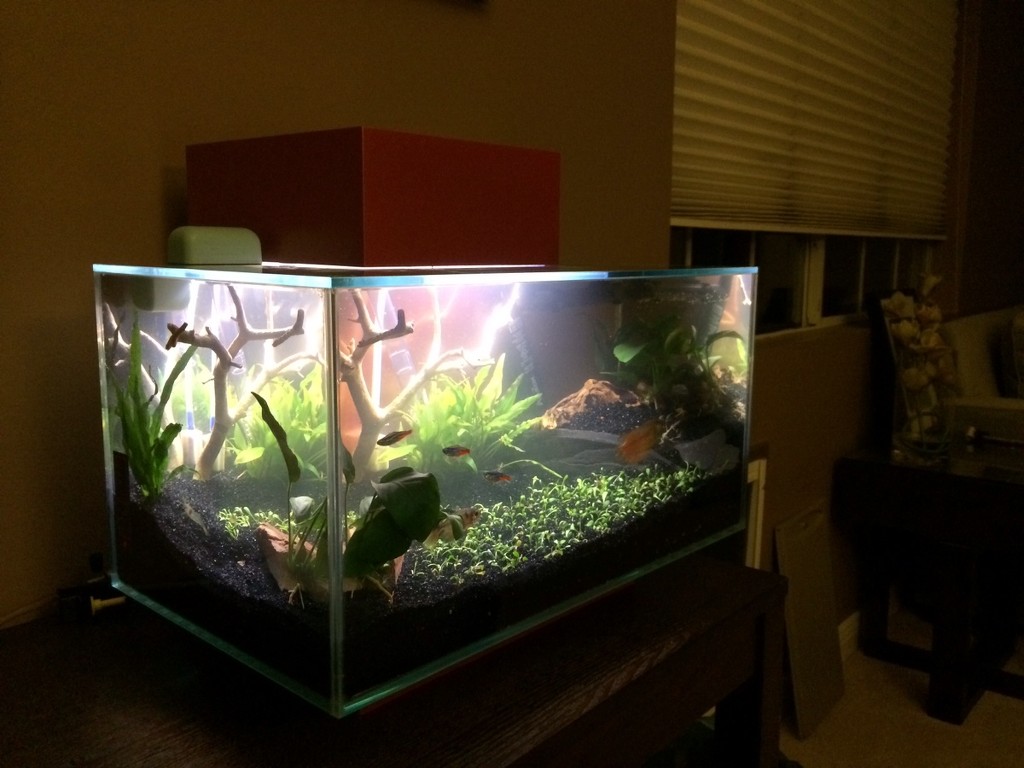 (water was a little cloudy for this shot due to some work I had done; it's normally crystal clear)

Anyway, it seemed more than time to start a tank journal for my somewhat heavily modified Fluval Edge (6 gal) tank.

A thread on the early days of this tank can be found here:
https://www.plantedtank.net/forums/sh...d.php?t=512145

Here's the best, most current shot of the tank as it is now. I'll try to keep a current shot up here in this opening post, as long as the board lets me continue to edit it: 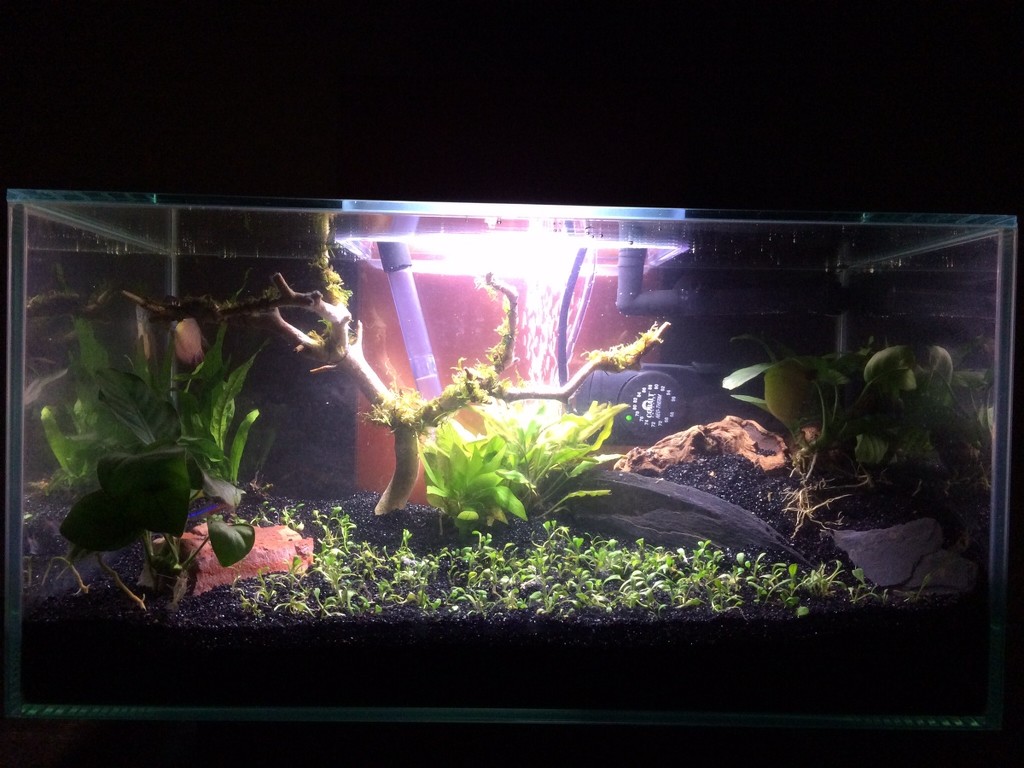 
I've gone through quite a few changes, considering the relatively short time I've had this tank.

Here's a shot of the tank in it's very first incarnation, with the OEM Halogen lighting: I ditched the OEM halogen lighting right away, and purchased a Fluval Nano light (84 LEDs!) to replace it, instead of the more common upgrade to the light arm that comes with the 12 gallon Edge tank (only 42 LEDs, twice the 6 gallon tank's 21 LED light, which is still better than the stock halogen lighting). More on that later.

I originally started the tank with Eco-Complete. The look was ok, although I never liked that it wasn't totally black, and a lot of red volcanic rock mixed in, too. My biggest issue was how light the stuff was. Very hard to plant in, let alone hold onto small roots like Glosso.

I've had Anubias since the start, although I've added more. The Crypt I had from the beginning, too, and I added the Hygrophilia and Glosso a little later, feeling like I needed more plants. I've rearranged my Glosso a couple of times, to the current hand-planted semi-carpeted state, too (hopefully to be fully carpeted before too long!).

I had a large (well, as large as will fit through the small opening in these tanks!) piece of Mopani wood in the beginning, too, which you can see in the photos above. I removed it when I put in the Manzanita branch. The Manzanita was a hassle! First, finding a good branch that actually has structure at the small level of this tank is a real challenge. Further challenging is the tiny opening at the top of the tank, which the branch has to get through! I actually had to purchase a larger piece that had the twisty look I wanted, even smaller bits of it, and break it into pieces. I used one piece in my Spec tank at the office, and another here. I still have several bits that would be ok in a bigger tank, but the best bits have definitely been used up at this point. I actually accidentally broke the stick in this tank at one point, the right half broke off, but I nailed it back together and it seems to be holding for now. I may need a better solution at some point in the future.

I started off with a 10w non-adjustable heater, which was nice because it could hide inside the HOB filter. But it seemed like it was struggling to keep the tank temps stable with our typical SoCal temp swings, so I upgraded to the Cobalt NeoTherm 50w heater, which has been rock steady, holding firm at 78 without a flicker. I look forward to my plants growing some more, so I can hide the heater, though, as it's kind of obnoxiously large (at least, in a tank this small).

Here's another shot of the early tank, while I was starting to collect more plants and experimenting with the new light. The light worked well but I couldn't close the hood properly, which was essential for aesthetic reasons: Anyway, after ditching the OEM halogen lighting, I tried a number of things to make the Fluval Nano light I purchased to replace it work. The problem was the Nano light was just about 1/2" too big to fit comfortably in the tank... with the stock HOB filter, that is. (Fluval uses a rebranded AquaClear 20 for the stock HOB filter) So I finally ditched the HOB filter entirely, and hooking up a canister I had, the Finnex, instead. It was a bit of a challenge figuring how to position the output so as to not blast the inside with continuous heavy current, given the non-adjustable output and small tank, but I finally realize that if I use the spray bar, and positioned it along the back upper corner, but pointing at the BACK of the wall, it diffuses and deflects the water nicely, and I no longer have fish fighting to keep in place.

This was all part of a major re-scaping that I did. I pulled out all the Eco-Complete, converted to the canister filter, permanently installed the light, yanked out the Mopani root and put the Manzanita branch in instead, and planted the Glosso carpet, all in one big weekend.

BUT: A problem almost immediately arose due to some unique characteristics of the Edge tank. Because there only a very small opening at the top, under the hood, and the rest is closed glass, there is very little room for air exchange. The HOB filter does a great job of keeping the water aerated... but after I swapped in the canister filter, unfortunately, that was no longer the case. The first night I did this I lost a several of my tetras, including the one larger serpae tetra that I've had for years (he's in one of the shots above). The rest were gasping at the surface! Sad to lose the serpae, although he was a jerk to the other fish anyway. The neons were purchased just to start the tank anyway, and considered sacrificial, so not a huge loss, but still sorry they died. I lose a ghost shrimp, too, oddly. Fortunately, the rest of the neons were fine, and the Gourami and the snails. An emergency water change later, and everyone was doing better.

A simple airstone, and a pump, seems to have solved the problem completely. Adds plenty of aeration, and no further problems with the tank denizens. Although I very much dislike the noise... even with a very quiet pump, the airstone itself is pretty noisy. And of course it's pretty clear that I won't be able to add co2 to this tank anytime soon unless I come up with a better way to do this. Not certain that co2 is really necessary in a small tank like this, however, and it's certainly simpler without it, but I liked having the option and had been toying with the idea of a simple DIY setup. I'll continue experimenting with the airstone, however. I was thinking it would be cool to have a super-fine mist of bubbles, and it might be quieter and dissolve into the water better, too. I saw a video once of someone who hooked air up to a ceramic co2 diffuser, and that seemed perfect! I bought a nice looking one on Amazon, but unfortunately, the quiet little pump I've been using for the airstone doesn't seem to have enough pressure to get bubbles through the ceramic. That was a wasted $10.

Anyone have thoughts on this?

At this point, the tank seems pretty stable, my water parameters are great, and I hope plant growth starts taking off soon. I'd really like the Glosso to carpet, but yeah, no co2 so it'll have to be slower with just Fourish, Excel, and root tabs to help. At least the Activ-Flora holds the plants in place a LOT better than the Eco Complete did! (despite my mystery snail's best efforts, LOL!)

Here's a better shot of the Glosso "carpet" I planted. That sure takes forever, breaking up the pot into individual plants and then planting them one at a time with long tweezers! I hope they start putting out runners soon, and really carpeting the area... that'll look great. 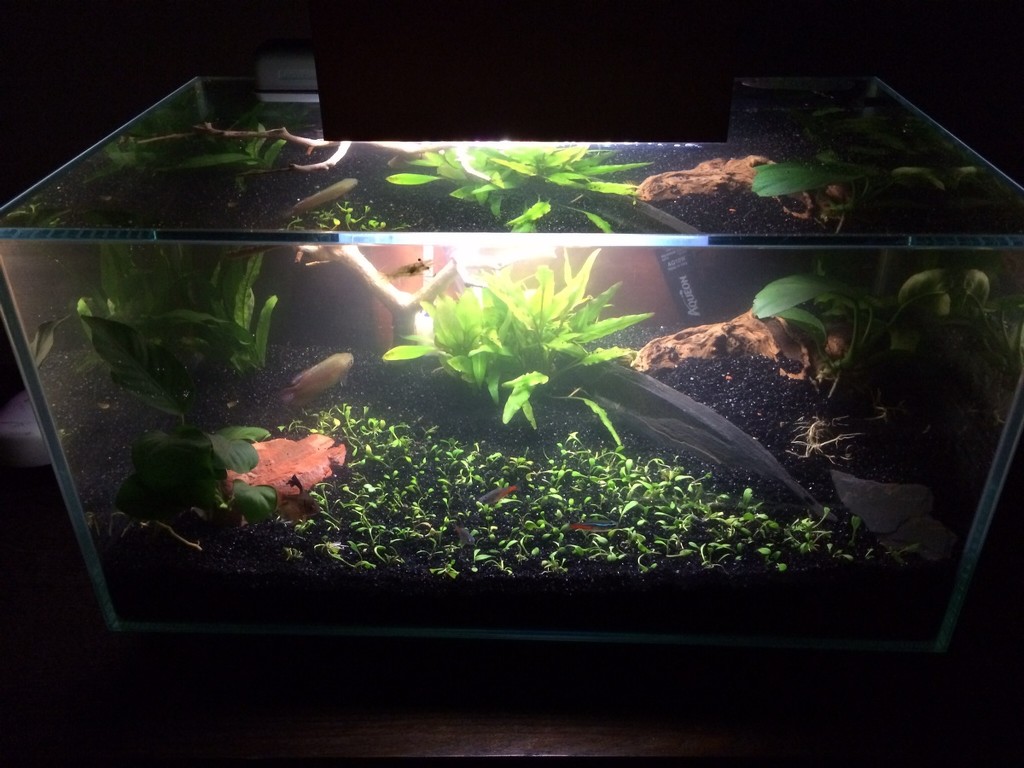 The most recent thing I did was tie a bunch of Christmas Moss onto the Manzanita (I used black 100% cotton thread). Pretty happy overall, although I really hope it takes hold well, because I have no intention of ever wriggling that branch out the access hole again, if I can possibly avoid it! Well, this will be an interesting experiment, at least. If the xmas moss doesn't work out, perhaps I'll try Java moss instead. From the photos I've seen, though, I really thought the Christmas Moss looked nice once it's growing out, so I thought I'd try that first, when I saw it at my LFS. 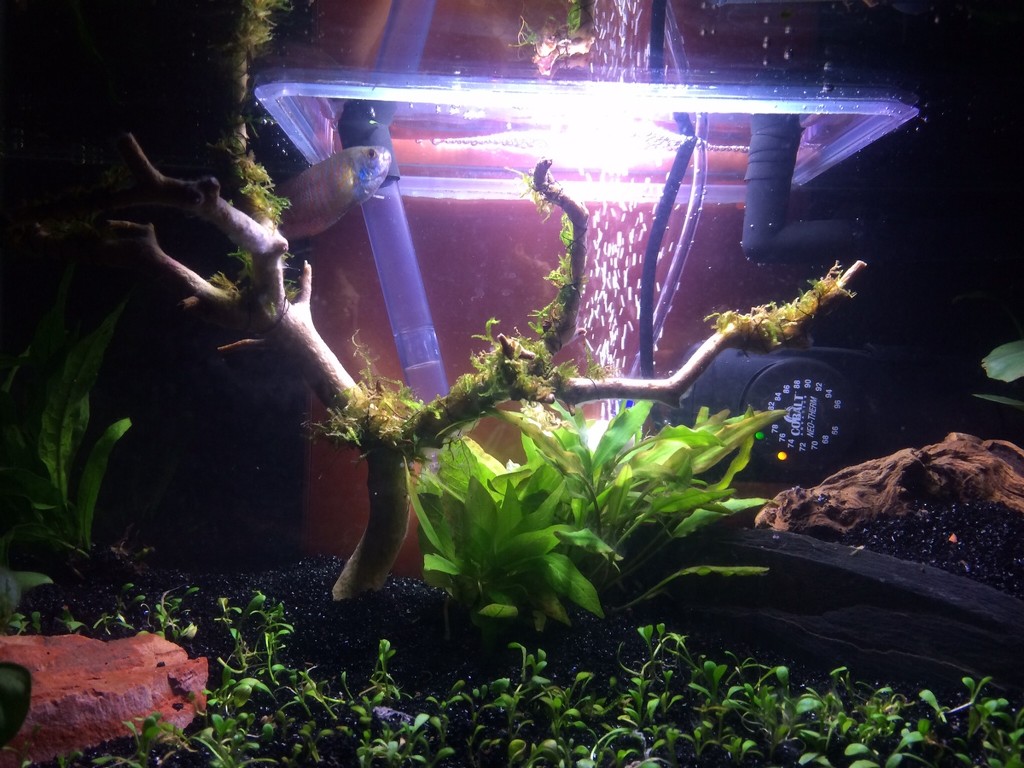 The one thing I really wish I could do is automate the Nano light's "blue" mode. I have the light on a timer, to give an 8 hour light cycle to the plants. (I run it from 4pm to midnight) I love the blue mode, however and I sure wish there was a way I could have it automatically kick over to "blue" mode for a couple hours at the end of the cycle. It's a hard switch, though, on the light itself: Full on, Blue mode, Off. I have to leave the light full on, of course, so the timer can turn it on and off just by cutting power. So no blue mode for me except for those nights I decide to flip it manually... and then I have to remember to put it back so the plants are properly lit the next day. Ah, well. First world problems, eh? 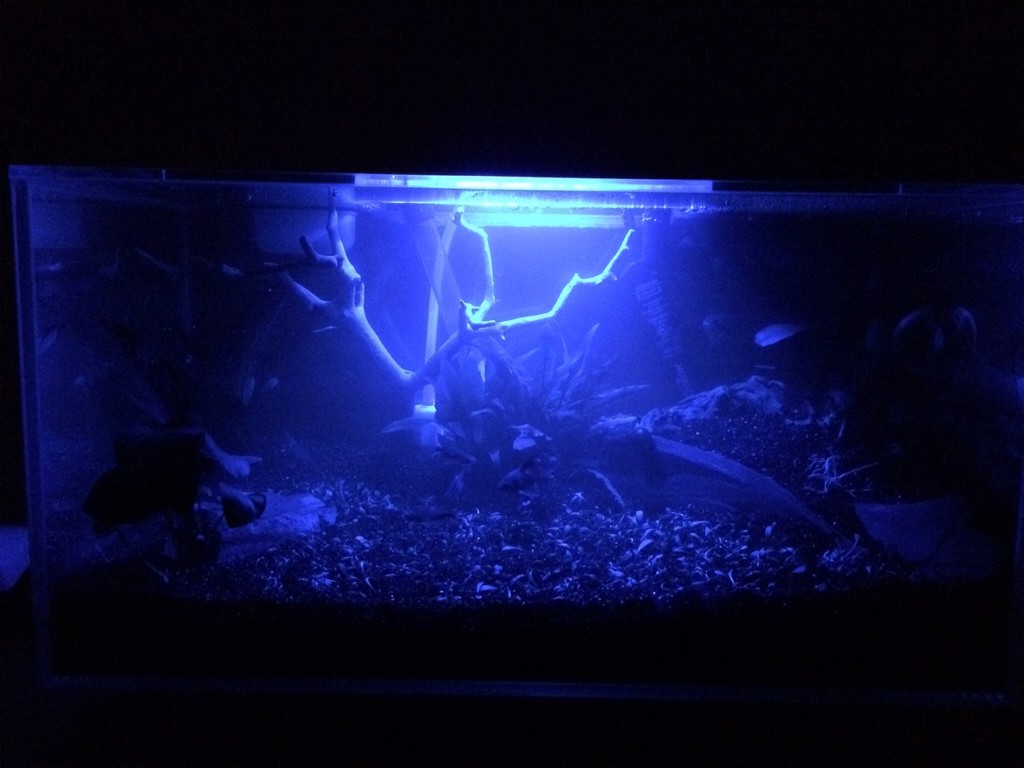 And finally, some fun to wrap up: I shot some video with my iPhone, using a cool time lapse app I found. You can see two hours of the tank's inhabitants in a mere two minutes by watching the two videos below! The snails are pretty hilarious, speeded up by the app.

I recently decided to upgrade to a larger tank with more options. So this tank has been completely torn down. All the flora and fauna have been moved to the new tank (I'll link the journal as soon as I finish typing it up!). I haven't yet decided whether I want to sell this Edge or start up something new with it, but I'll update this if I do something more with the tank.

Link to new tank journal:
First rimless, Third planted, mid-tech!
To view links or images in signatures your post count must be 10 or greater. You currently have 0 posts.

(View User Tanks)
PTrader: (1/100%)
Join Date: Nov 2011
Location: Canada
Posts: 2,387
Nooooo!!!! I just found out about this tank, and I think you have something good going. I know how you feel about the glosso planting, the inferno Fluval Edge is ridiculous to scape not to mention clean.

It seem like no one is doing high tech Fluval Edge anymore, hate to see you let it go.
To view links or images in signatures your post count must be 10 or greater. You currently have 0 posts.

(View User Tanks)
PTrader: (1/100%)
Join Date: Dec 2013
Location: Los Angeles
Posts: 2,350
Yeah, I liked the tank a lot, but there were just too many issues. Maintenance was a nightmare and I never got lighting where I needed it to be. Too much light in the middle, and not enough on the edges, without adding supplemental lighting that would mess with the overall clean aesthetic. It also needed co2 but aeration was an issue because of the conversion to a canister filter. The list goes on and on...

Ultimately, I'm a lot happier with the 60P.

One of these days, though, I still might resurrect the Edge into a low tech, low light tank. Perhaps a shrimp tank.

No room for another tank at home, though, and I'm not sure I want to take on another tank at the office. :/
To view links or images in signatures your post count must be 10 or greater. You currently have 0 posts.