(View User Tanks)
PTrader: (0/0%)
Join Date: Sep 2013
Location: Desert SW USA
Posts: 1,309
Quote:
Originally Posted by 180g View Post
wow! you must be taking very good care of her because she looks very healthy!
Yeah she is pretty healthy, however she does have a neurological degenerative issue that is causing her to drag her feet some, but not too bad at this point. So I am very thankful that is her only issue! Hopefully it doesn't get to the point of her not being able to walk or control her bodily functions back there.
300g 8' acrylic aquarium acquired, in process to build/setup/plan setup

(View User Tanks)
PTrader: (0/0%)
Join Date: Sep 2013
Location: Desert SW USA
Posts: 1,309
So last weekend I started to make the cabinet doors, yes I know finally! So initially I planned on making shaker style doors, but instead of the traditional doors I was going to miter the corners at 45* angles, however I could not get the saw calibrated enough to get the proper 45 degrees to be perfect. So I decided to go with the traditional look to the doors. So now all that wood that I had previously routed and planned to just cut at 45's no longer will work. So long story short is I got the door frames all cut out and just need to do some more routing on the framing and put it together, then of course cut out the insert on the panels.
chayos00 is offline
Quote Quick Reply
post #35 of 1000 (permalink) Old 09-24-2016, 04:08 AM Thread Starter
chayos00
Wannabe Guru

So the physical build of the stand is pretty much done at this point. I'm currently working on my urethane coating on the stand at this point, which has been a challenge all on it's own.

The trim was a pain for me to get right. Took a while to figure out the 45° cuts to make them butt up together, the canopy isn't perfect, but I got the stand much more accurate. I found some trim that I thought looked good at Home Depot. The first go round, I cut it all too short, so back to the store to do it again.... but I got it right at that point. You might notice a pieces of wood along the top of the canopy, well those are what I used to nail the canopy trim to hold it to. The front piece has one along the whole top as well.

For the staining method I used was as per this article. However I do have this to say about using gel stain, after the first coat is applied it's like attempting to lightly paint a little on so that you aren't just wasting your time and wiping it right off. So after getting the darkness I liked, I moved on to putting the Arm-R-Seal satin topcoat on. Had some issues that reddit's r/woodworking was able to point me in the right direction. So right now I'm at the point where I'm building up my topcoat layers to make it thick enough of a protective coating.

Had some issues with the Arm-R-Seal satin after a few coats it got cloudy, after another post online it was recommended to go with gloss as that doesn't have any flatteners it in causing cloudy looking seal issues. So once I've got enough protection on, I'll put on a coat of semi-gloss or satin, depending upon what my test samples turn out like.

The doors took some thinking of how I was to make mount the panel insert in the center of the door. I finally settled on using these really short nail gun nails and basically stapling them into the outer frame. I put several straight into the front of the frame and then after that I went between them and put others at a 45° angle to hold the panels in place. I then got to staining the doors after the stand and the canopy as I was limited on space to set everything.

The inside of the canopy will get painted white, just haven't gotten to that part yet. I'm also going to have to put another layer inside the stand as I've gotten some of the gel stain on the paint that stained it brown.

So yeah, I think that's about where I'm up to on this. 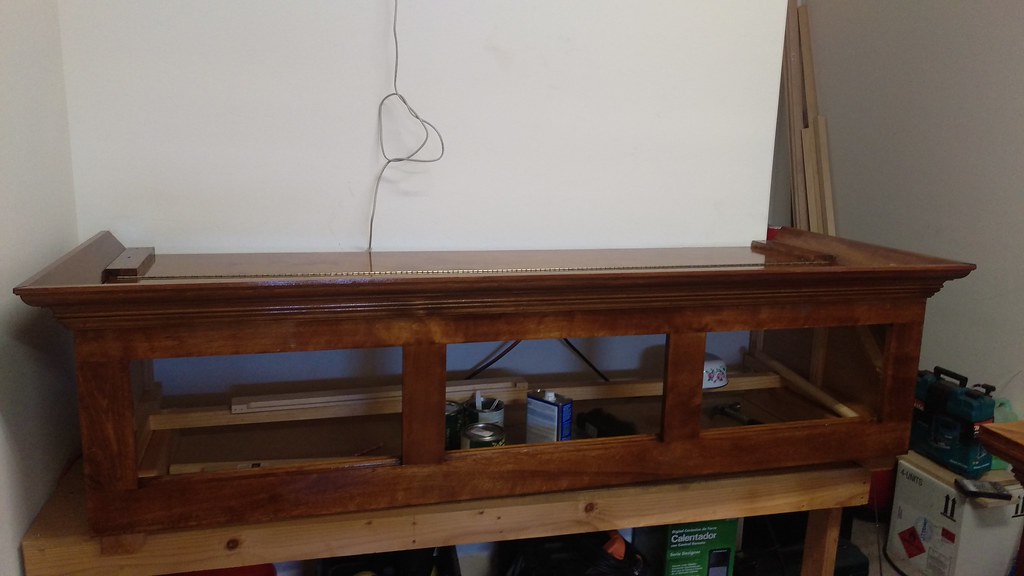 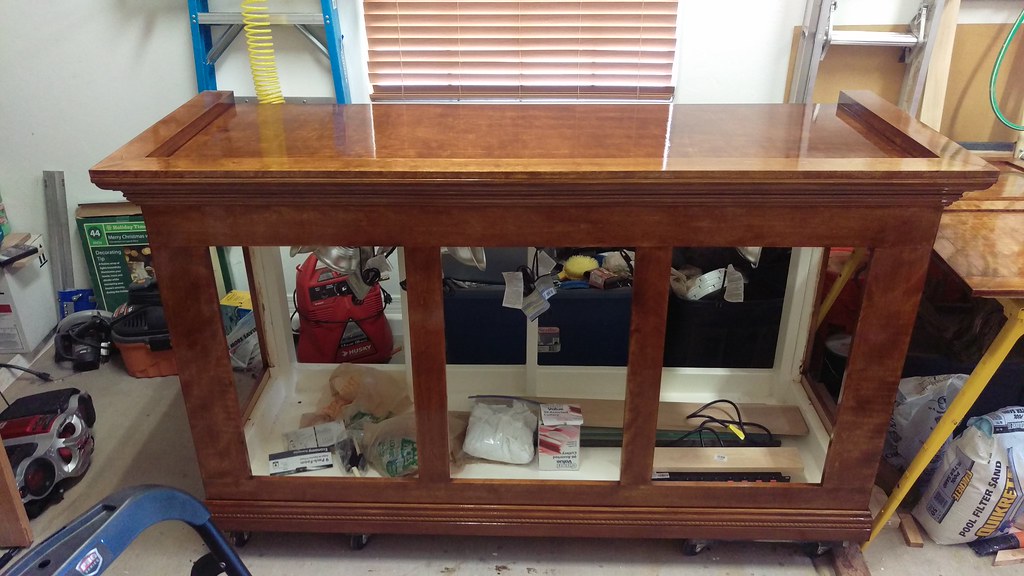 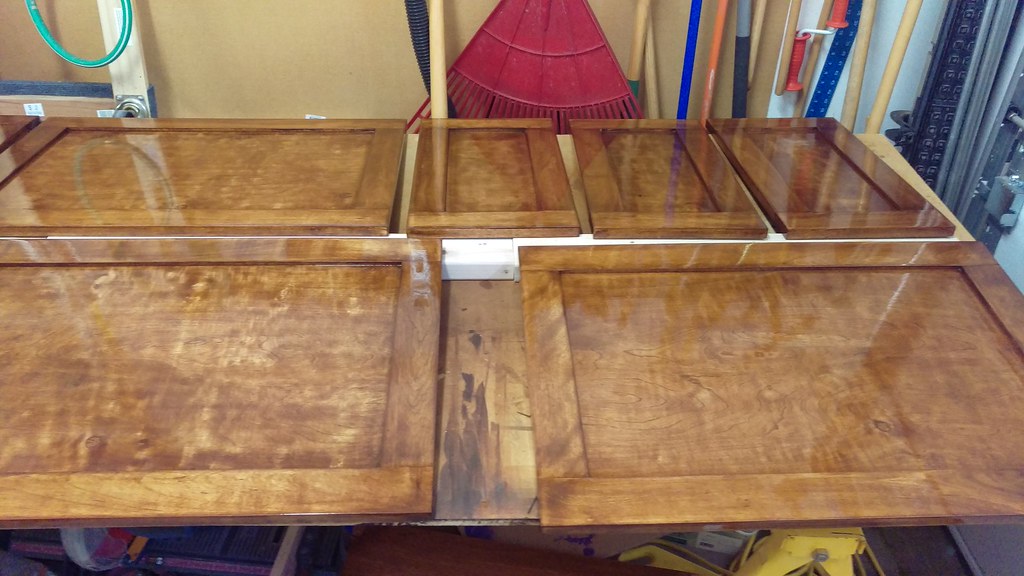 Thanks for the tip about putting heaters in with soaking driftwood to speed up tannin release. I got the Malaysian driftwood, so that will be a big help.

I just found a local supplier who can get me the acrylic I need to make my DIY overflows. Getting a 48" X 48" sheet of 6mm black acrylic for what I can get a 48 X 24 sheet online. Not just at 52-53 bucks. Plus I found a buddy who has a decent table saw that I can cut it into what I need. Finally nice thinking that I'm seeing the light at the end of the tunnel!

But I have to ask.........have you been building this stand for almost 3 years?
Ummmm..... yeah...... It's been very off and little on for working on the project. I'm a horrible procrastinator! But I've gotta get it done shortly as we have another one on the way.

Plus I over think the crap outta things an end up getting "analysis paralysis!" Screws me horribly for getting stuff done.

Sent from my HTC6535LVW using Tapatalk
livingf1t and livingf1t like this.
300g 8' acrylic aquarium acquired, in process to build/setup/plan setup

(View User Tanks)
PTrader: (0/0%)
Join Date: Sep 2013
Location: Desert SW USA
Posts: 1,309
Quote:
Originally Posted by Ben Belton View Post
Wow... I know have a name for my own condition.
It's taken a while but I have finally admitted to myself my issue! LOL

(View User Tanks)
PTrader: (0/0%)
Join Date: Sep 2013
Location: Desert SW USA
Posts: 1,309
So time for another update! The stand and canopy build is finally finished!! I have the final coat of urethane on and if there's any imperfections, I don't care anymore I am done! LOL I am FINALLY done! I way over did this to make it a furniture grade stand. I can say I will never do that again!! However I hope you like it! Now to get the tank resealed, drilled, plumbed, and my overflow setup! 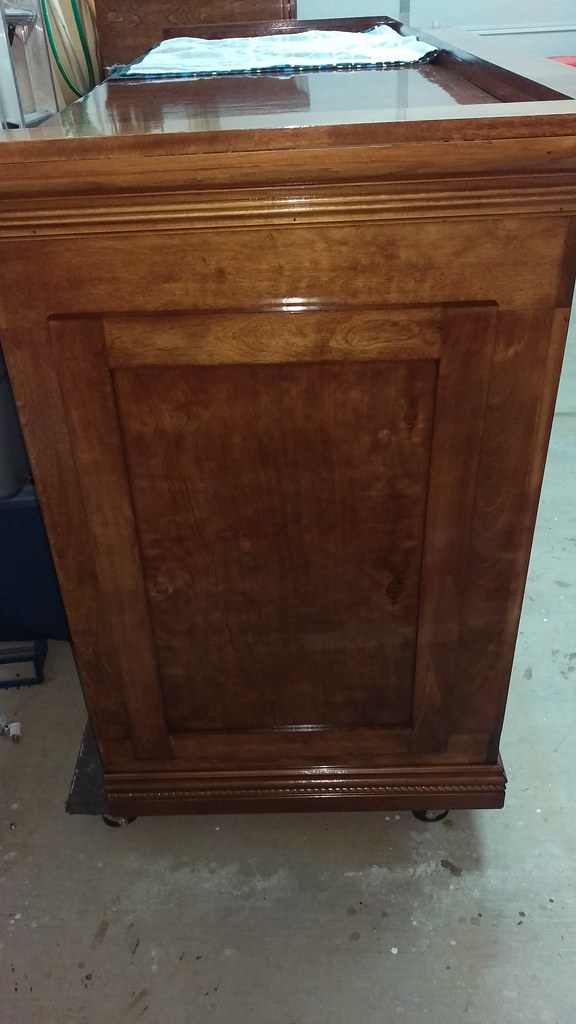 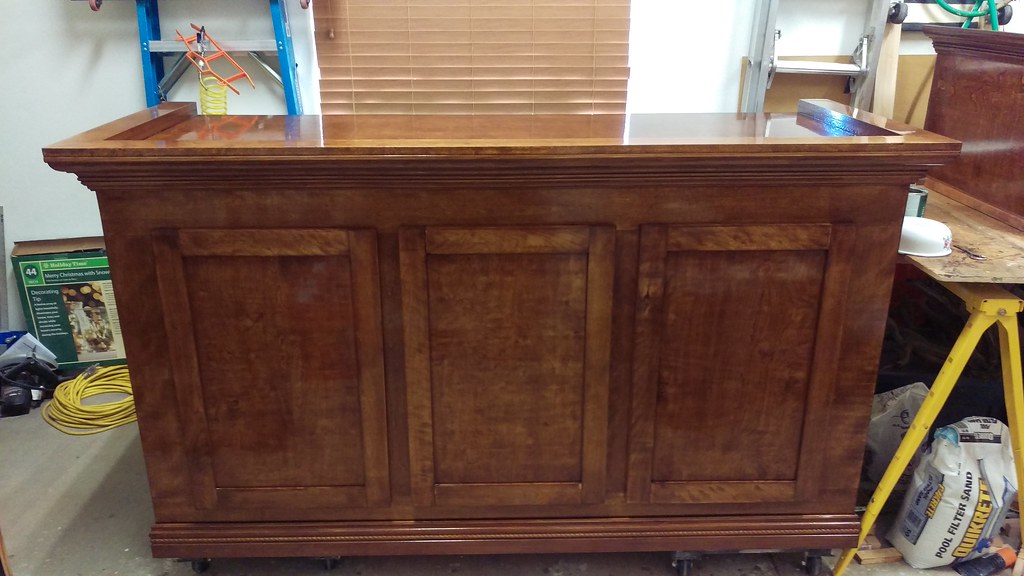 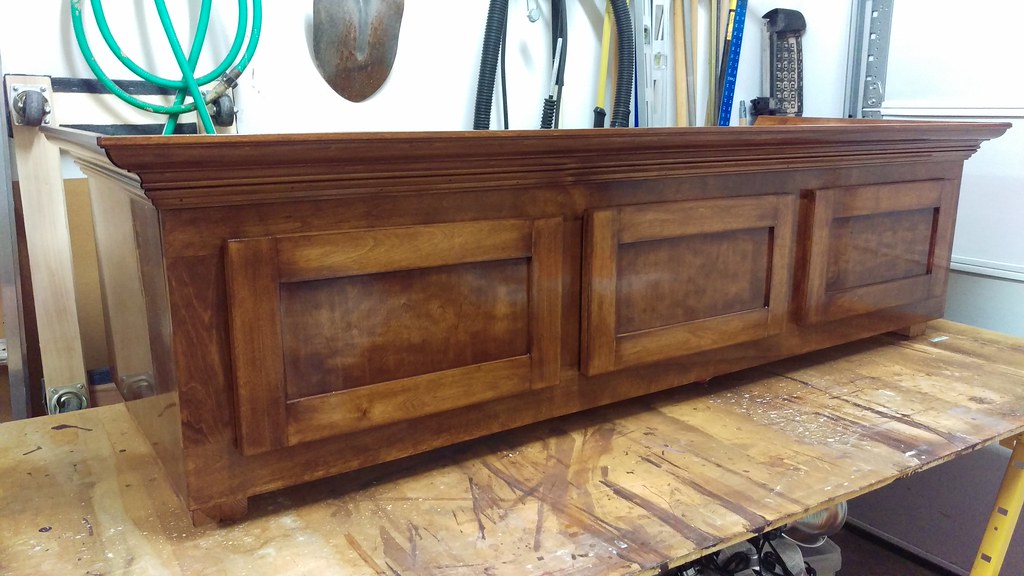 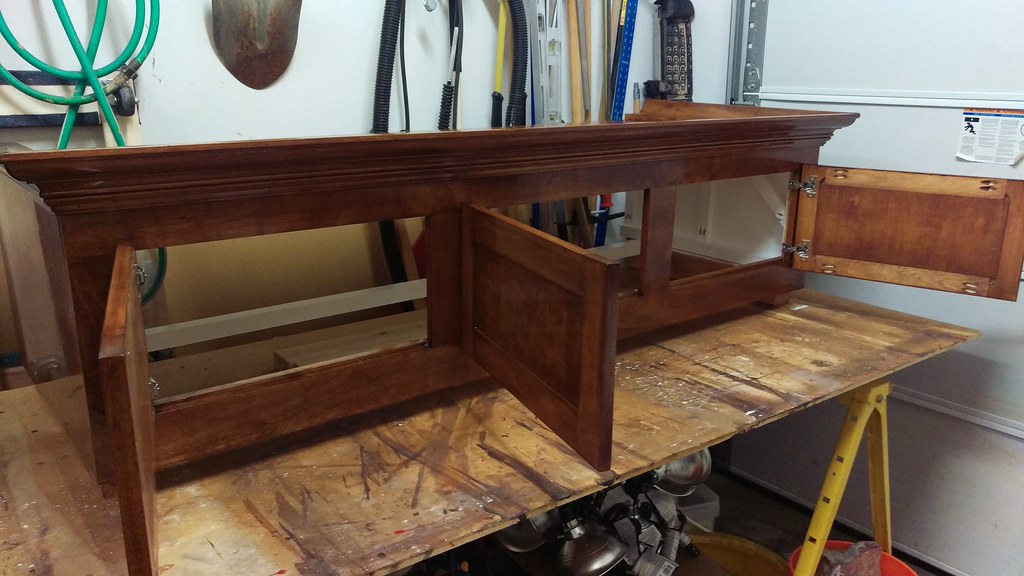 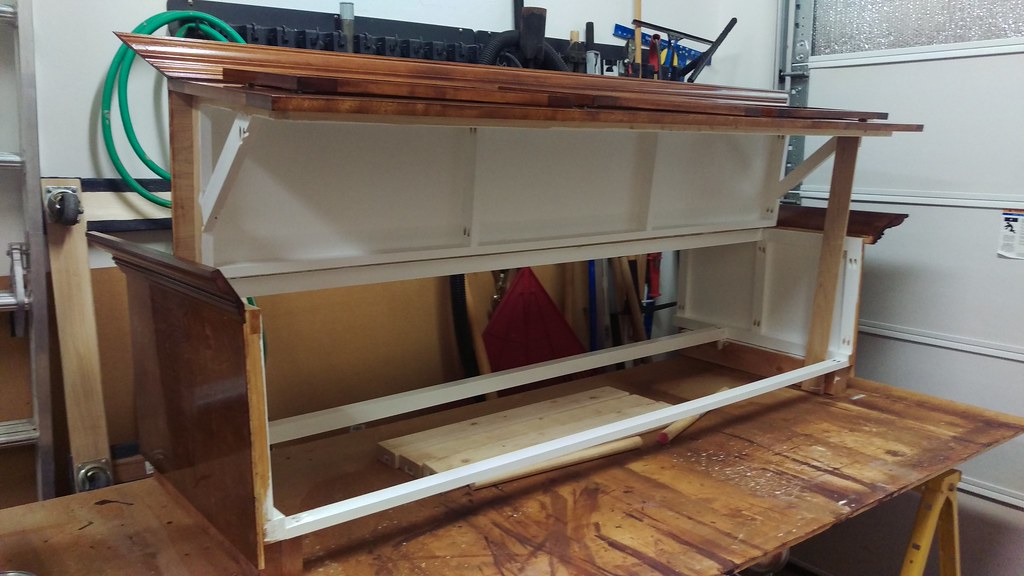 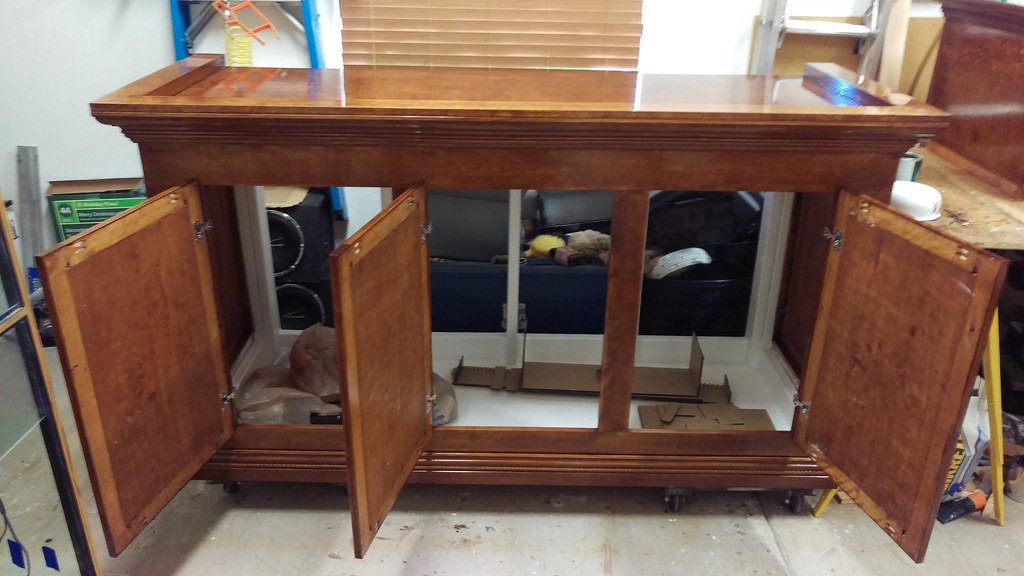 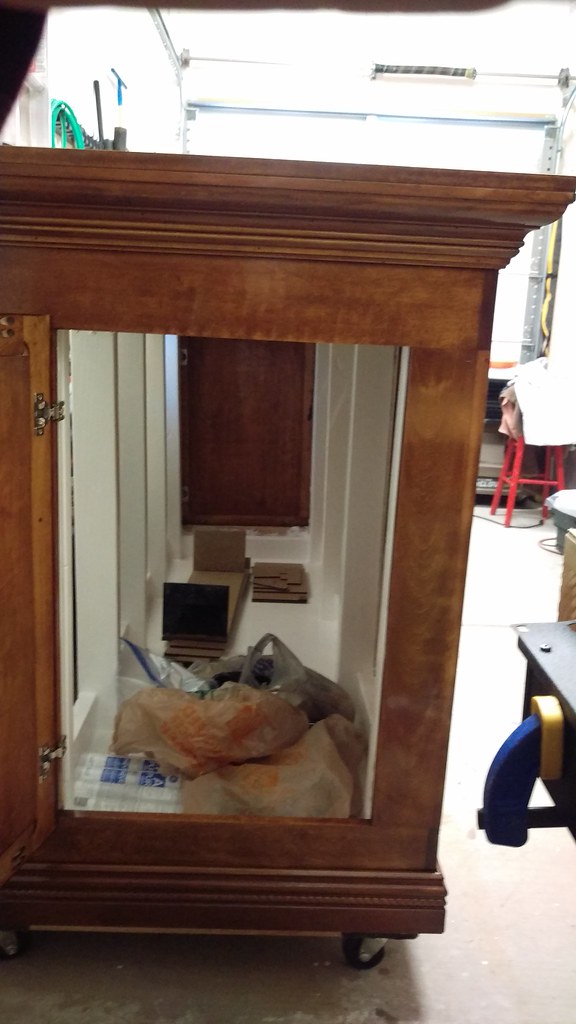 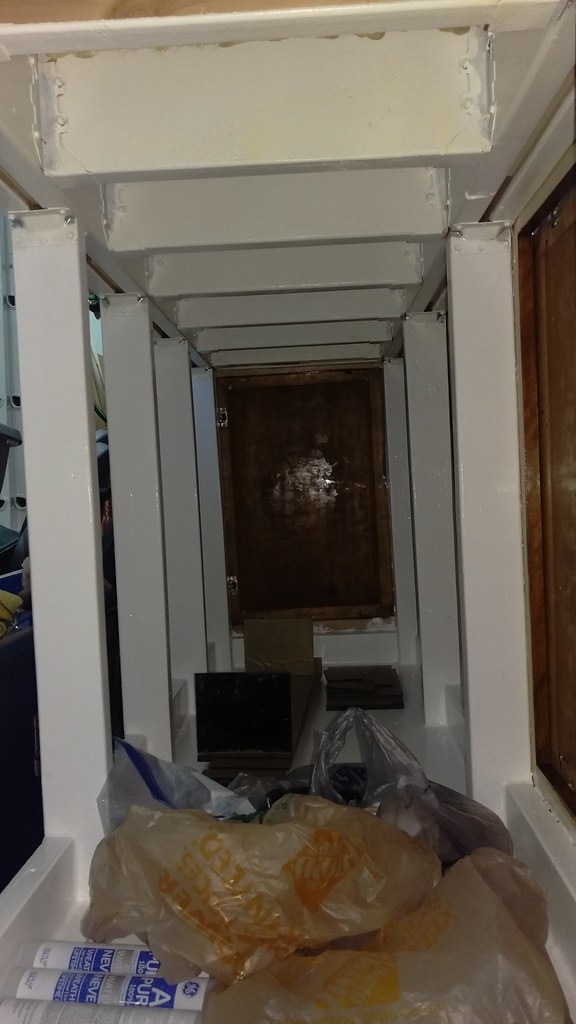