I have another thread on here (that definitely needs to be updated) for my DIY 33 gallon planted community tank, but I'd like to introduce my latest project.

Everything I do with my aquariums is DIY and done on a budget, partially because it's difficult to find anything but the basics here in Nova Scotia, Canada, but mostly because I enjoy tinkering and building things myself whenever possible.

This particular tank started as a fry tank for my 55 gallon mbuna Cichlid tank and evolved into a low-light no-tech holding tank for a few ferns and mosses - basically all put together with leftovers from my other builds.

About 2 months ago, I decided to finally spruce it up a bit and began planning what I wanted to accomplish.

The tank itself is a basic, cheap 10 gallon that was given to my by my sister in law when she realized fish tanks actually take some work. I de-rimmed it immediately but, up until recently, never really put much thought into it beyond that.

My goal was simplicity and relatively low-maintenance/low cost but, most of all, I wanted it to look good without breaking the bank. To me, this means absolutely the bare minimum for visible equipment in the tank.

With this goal I devised a plan for how it would be lit, filtered, heated, CO2 injected and displayed without any ugly equipment getting in that. It took a while to get everything the way I wanted, but I'd say I did pretty well!

New setup has been up and running for about 3 weeks (since the tear down and rebuild...running for over a year prior to that) so the plants all need to grow in and I'm still working some small bugs out, but it's getting there! 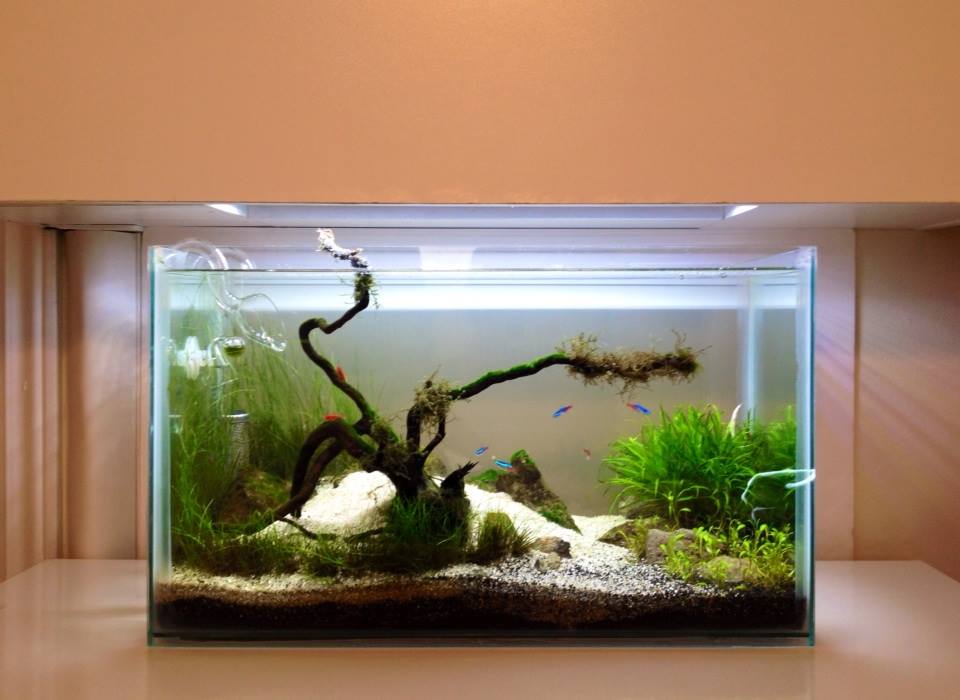 All of the equipment is mounted on a shelf I built under the desk (originally an Ikea computer desk, but it's been modified quite a bit). The shelf is hidden by a cabinet door that, when it's closed, is pretty tough to notice. The filter tubing gets to the tank via small holes that I drilled into the table so all that is visible is clear tubing, lily pipes and the tank itself.

I also built a box-shelf over top of the aquarium (which actually holds my TV... this is all for the computer desk in my Man Cave) and that box contains my Current USA Satellite+ fixture. This puts it about 10-11" from the substrate, so I could use more light, but it could be worse.

I will take some better pics and also show the inner workings later tonight, but I figured I'd get a start on this thread now.


(View User Tanks)
PTrader: (0/0%)
Join Date: Dec 2012
Location: NS, Canada
Posts: 118
Here are some pictures of the guts of my setup. Just crappy cell phone pics, but I will take some better ones shortly. Still have to clean up the wiring and brace up the shelf, but a project isn't a project without a "to do" list. 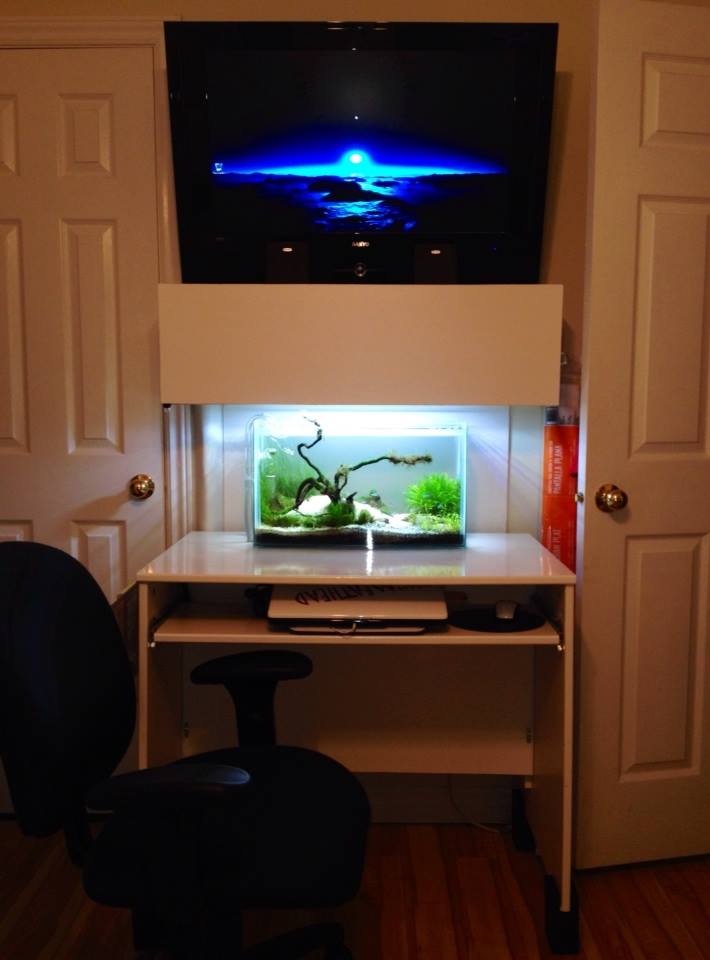 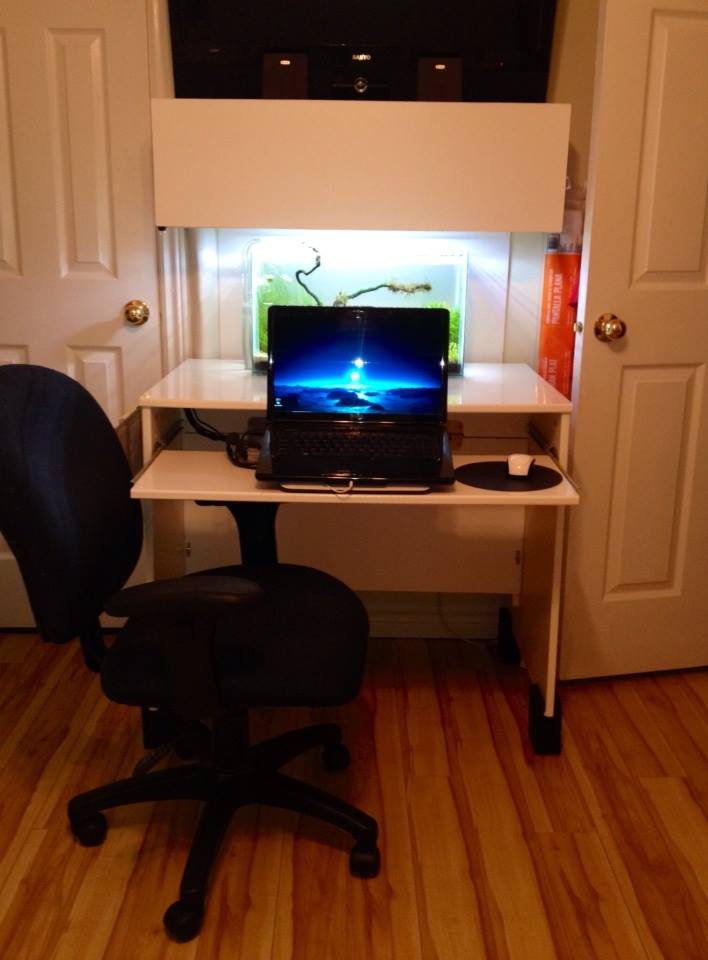 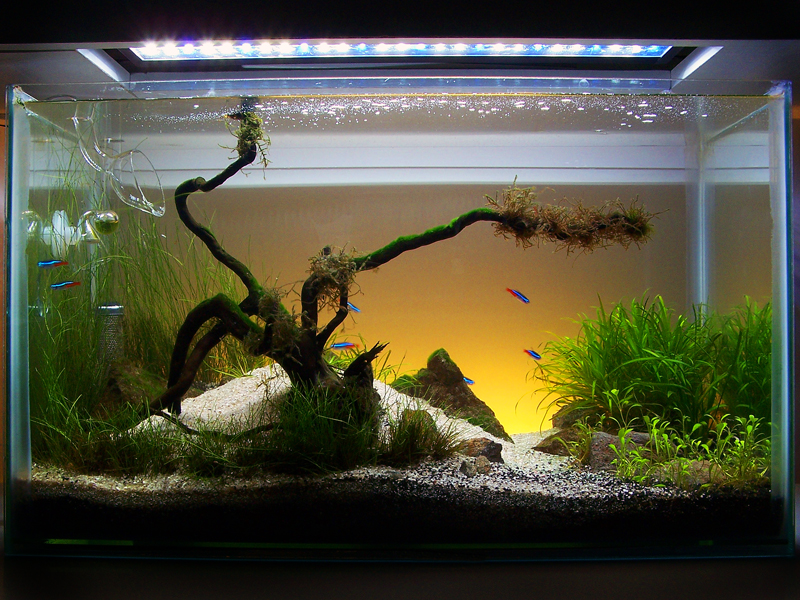 Bit of a better pic (still just a point and shoot, but better than a cell phone, at least!)


(View User Tanks)
PTrader: (0/0%)
Join Date: Dec 2012
Location: NS, Canada
Posts: 118
Quote:
Originally Posted by zetvi View Post
That's a nice lighting effect on the back ground. What is it that you have behind there?
Thanks! They are just cheapo amber neon tube lights. 12V meant for automotive use, most likely, but I have them set on a timer to come on an hour before the main lights and stick around for an hour after to to create a semi-sunset effect - still would love a ramp timer in the future!

As for my other planted tank, here is a recent updated pic. Things are filling in slowly and the scape is still changing as things mature and I keep tweaking. Started a thread showing that tank a while back. 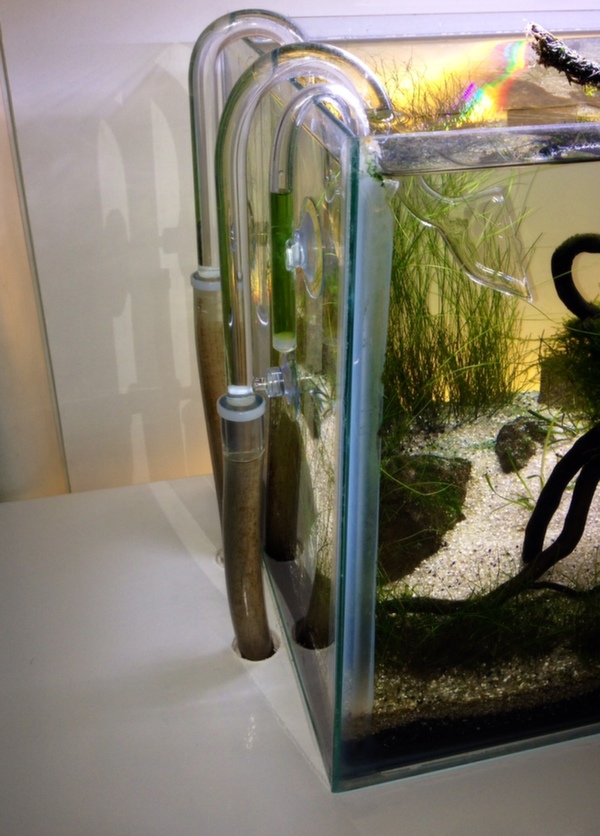 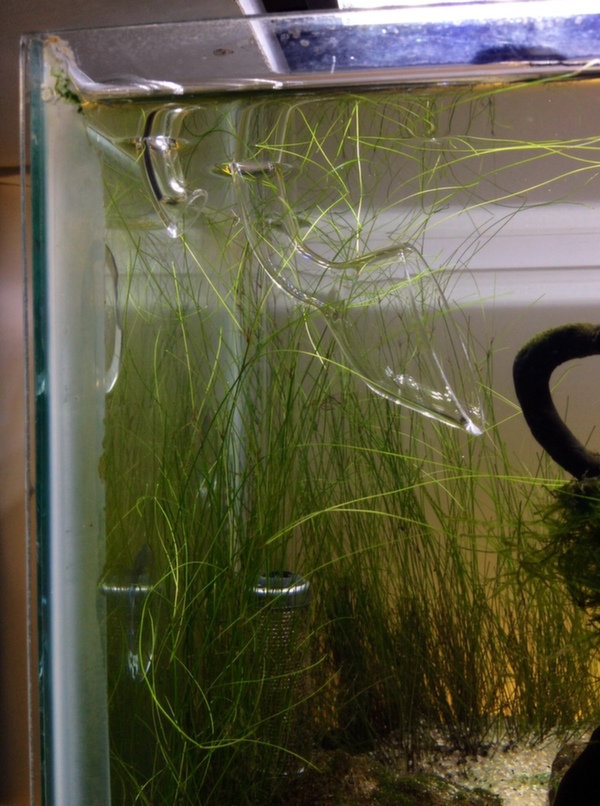 DIY external drop checker made out of acrylic tubing I had laying around. Bent it to match the look of my lily pips, super-glued a suction cup to it, siliconed the end shut, filled it with 4dkh water and indicator... done! Took no time at all and removed the final piece of equipment from the tank.

I'm going to play around with some other designs and see if I can get creative but, for a first try, it's not so bad!

Also, since my last update, I have moved my neons over into my community tank and this 10 gallon is now home to 3 dwarf puffers! That was the original intention of this new setup, but my local shops never stock them. Made a trip to the city yesterday and came across some that I couldn't pass up.
danstock is offline
Quote Quick Reply
post #11 of 151 (permalink) Old 11-27-2013, 06:41 PM
asuran
Algae Grower 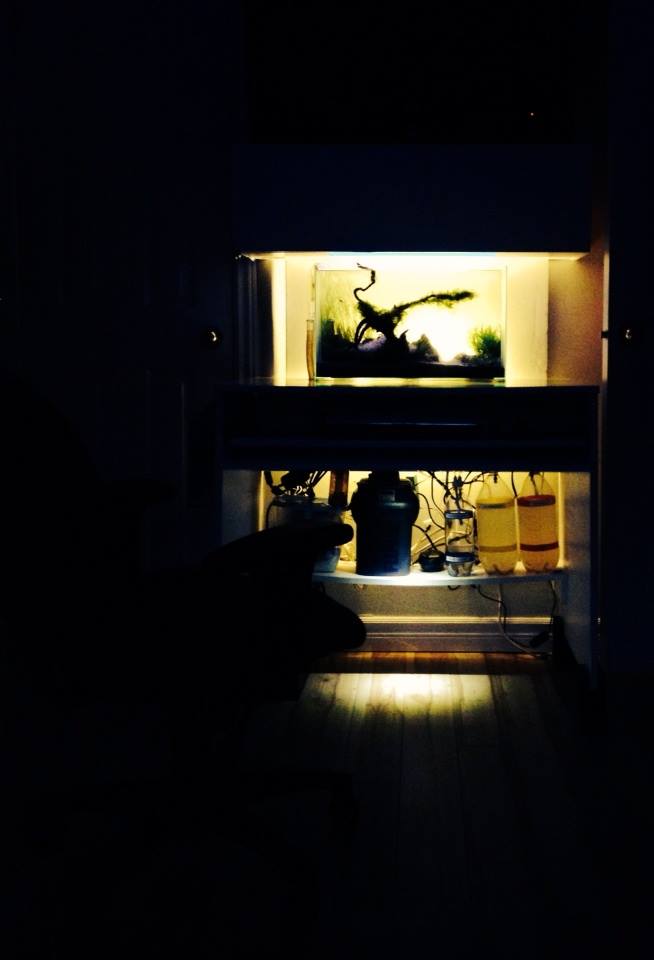 
(View User Tanks)
PTrader: (0/0%)
Join Date: Dec 2012
Location: NS, Canada
Posts: 118
Latest update: it is now my Dwarf Puffer tank (houses 3 puffers and a handful of cherry shrimp) and it's starting to grow in a bit. I think it will look really nice when it all matures and fills in! 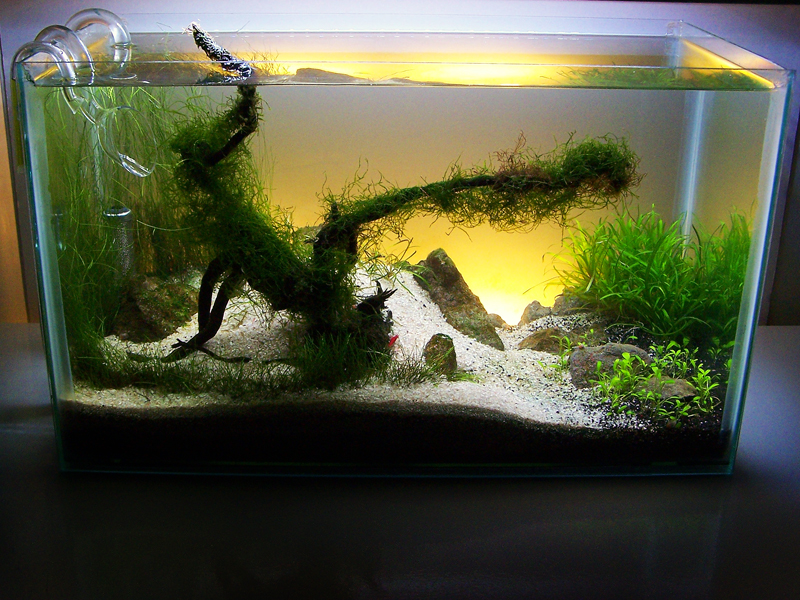 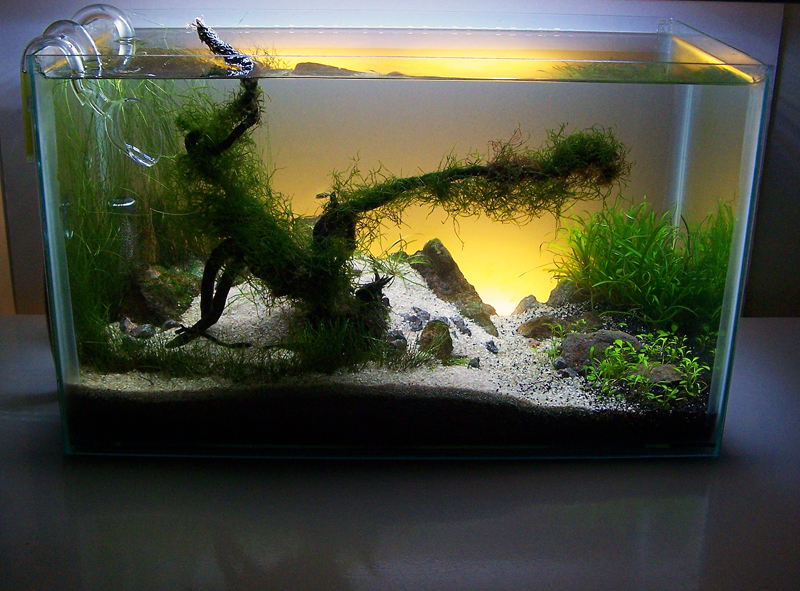