After having a Juwel corner tank for 2 years and always regretted that I didnt buy a rimless tank and also because its really hard to make a scape work in a corner tank, I decided to buy something else.
I really liked the 12 gallon Mr. Aqua tank but you cant buy them here so I let my LFS build a rimless tank for me. I went a bit bigger than the Mr. Aqua tank. The dimensions are: length 120cm X wide 40cm X height 35 cm (inches= 47,2 X 15,7 X 13,8). This is the result. I know its not as nice as an ADA tank but it was a lot cheaper and I still think it looks nice. Glass should be optic white.

Since my old aquarium had its own stand that was corner shaped, I had to get a new stand as well. Since I am on a budget I decided to build it myself. On www.projectaquarium.com I found sort of a tutorial of how to build it. Since my dad has friends in the construction business I asked him to check how much the materials would costs. I gave him the print screens from projectaquarium.com and then it went quiettoo quiet. Until a week later he sends me these pics. 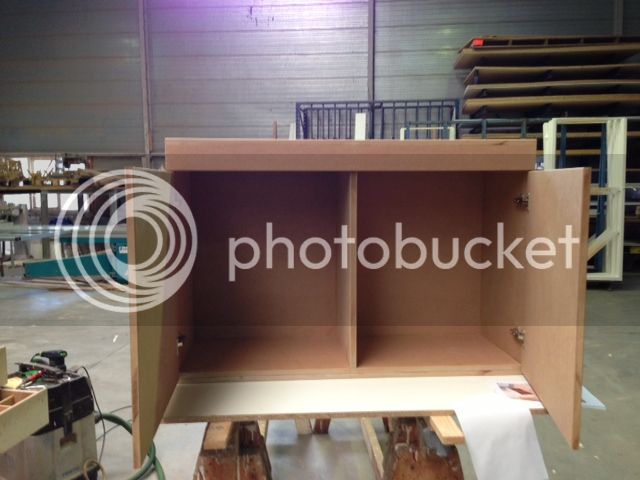 He secretly had the stand build! I was very surprised and very happy because to be honest if I had to do it myself well let me put it this wayI cant even build ikea furniture to something usable. I did paint it myself though

In the meantime I was trying to figure out what I wanted to do with the aquascape. Im a sucker for the Amano style and I love Iwagumi so I had an idea. I build a fake tank and threw some rocks in. That didnt work.
Luckily there are forums like these were people are willing to help each other. I was already in contact with Solcielo Lawrencia (calling him Lawrence from now on) about my old tank and he offered to help me with my new scape by giving me pointers.

So I created something that I thought would look nice and Lawrence helped me to make it work and also teaching me why you would do something and why not. Since we had only contact by mail using photos and a major time difference it took us about 2 weeks to create the final layout. Lawrence was a big help in making this scape, to be really honest I often felt like Amanos helpers in those black t-shirts and following Lawrence his input. I could not have done this without him, again as always thank you very much Lawrence!!

This was my fake tank:

And here I went to recreate and improve it in the real tank:

When I thought this would be my final layout I got an email from Lawrence with this drawing attached. What would I think of a path/river/road running through the tank. I wasnt 100% enthusiastic about it because I have no idea how to keep in clean and not covered in plants. But I really liked the sketch and thought I will figure it out when I get to that point.

The Tank with and without the path:

When the hardscape was ready I went for planting.


For technique i have the following:

Glassware from fleabay, still waiting for the lilypipes though:

Some pictures after planting:

Now the wait has begun

To view links or images in signatures your post count must be 10 or greater. You currently have 0 posts.
tandaina is offline
Quote Quick Reply
post #3 of 7 (permalink) Old 10-12-2013, 03:50 PM
tizzite
Planted Member

After 25 days, this is the result so far.

I had some diatoms issues but it seems that its going a bit better now. The HC doesnt have the right colour yet. I think its because of the diatoms. The growth is fine i think.

(View User Tanks)
PTrader: (0/0%)
Join Date: Aug 2012
Location: australia
Posts: 82
wow stunning build and your planning has paid off, hats off to you mate :-)
To view links or images in signatures your post count must be 10 or greater. You currently have 0 posts.
AussieDIYFK is offline
Quote Quick Reply
post #6 of 7 (permalink) Old 11-04-2013, 12:22 PM
CPD
Planted Tank Enthusiast


(View User Tanks)
PTrader: (10/100%)
Join Date: May 2013
Location: MOORE OK
Posts: 773
I realy like what you are using for the light holder you can raise it up or down right, and the scape looks awsome
To view links or images in signatures your post count must be 10 or greater. You currently have 0 posts.


To view links or images in signatures your post count must be 10 or greater. You currently have 0 posts.
JEFF9922 is offline
Quote Quick Reply