(View User Tanks)
PTrader: (11/100%)
Join Date: Apr 2004
Location: connecticut
Posts: 3,279
scolley's 75g Big Clear Kahuna (56K warning)
I really didn't intended to start a thread on this aquascape and tank. At least not so soon. The whole build was documented here. And what a blast it was too!

So now for the end product of that effort... which is really more like the beginning, at last!

This is a pic of the tank on the night of the very 1st planting a few days ago. It got more plants the next day, and started a bit of GW that very same day. Oh boy.

If I can pull it off, it will be a biotope, or a reasonable approximation of one. It is supposed to represent a Cypress forest, like the ones I grew up fishing in as a kid. You should be able to make out the Cypress stump on the left, and the Cypress knee on the right. Most of the plants are North American:

With a few notable exceptions:

Nymphaea lotus var. viridis - not native, but introduced around a hundred years ago, and pervasive now through out the south
Hemianthus Callitrichoides - arguably native on the Gulf Coast, depends on your source.
Vesicularia dubyana - Java Moss - I wrapped some lava rocks with this and used them on the border between the Ecco-complete and sand. HC is planted along that border, and once (if) it kicks in, I'll remove the moss rocks.

No fish yet except a lone Crossocheilus siamensis - SAE, and a few Caridina japonica - Amano shrimp, that seem to have disappeared. As the tank stabilizes I plan on adding more shrimp and probably stocking with North American species.

For now, I've got to get the CO2 plumbed (had to build a new DIY diffuser), the UV plumbed in correctly (it's kind of slapdash now).

It's an Ecco-complete substrate, with a separated quartz sand area. I would have preferred to not have any ferts in my water column for a while, and let the EC drive the initial growth. But my tap water is heavy with Phosphates and Nitrates. So I've gone ahead and added Potassium, Iron and TMG. And at least until I get the CO2 running, I'm adding Excel.

Since the pic was taken there are more plants added. And I'm not happy with how the location of the "creek bed", or channel of water in the middle turned out. I wanted it further to the right, and angled more. I also wanted it to have a bit more of a rise in the middle so it would visually drop off, kind of disappearing off into the distance. I'll try to fix all that once the plants start to root.

Can I be a total newbie and ask if those are real cypress (assuming they are, here, since this is a planted tank forum.) I've been seeing more and more wood structure use in planted tanks (and love it) but don't know how it is done or if it is "real." Can you elaborate a bit (or point me to a DIY?)

It's nice to see your dream come to fruition.

I have seen so many scapes on these forums. That is one of the better starts!! Oh and the tank itself looks awesome man!!! Great work!!

Yeah, the Cypress is real. I got it from Donna Gracie at Tom's Cypress, the only place I found where I could get that stuff. It ships dry, not real expensive, and light as a feather (so shipping is cheap). But I had to quarter the stump, which was a real PITA since I don't have a chain saw. And then found that no amount of boiling would make that stuff sink. So there's quite a few pounds of 1/2" slate drilled onto the bottom of that stuff.

Bert - here's a pic of what I wanted the channel to look like. It was just tough pouring the sand and it didn't work out. I'll fix it after the plants root. But the idea was for the end of the channel to not be visible when looking at the tank straight on. 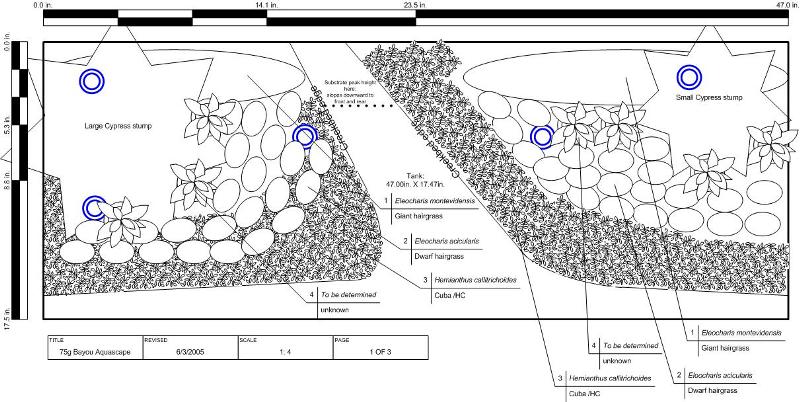 I need to get a new pic of the tank up, and then I can explain some intended features of the 'scape that are not so obvious in my first pic.

But thanks for the kind feedback!

Finally, the tank is filled with water and plants !
Thanks for posting this first picture ! I always liked the fresh start most, where things has to mature and you still can wonder how it will be in a few weeks.

And indeed, it is looking very very clear...
Geeee, now I am a bit jealous about your clear glass...