(View User Tanks)
PTrader: (17/100%)
Join Date: Apr 2014
Location: Alabama
Posts: 593
Two Brothers, 60p
Hey everyone, it's been a while since I've been on and posted anything. I'd moved from CA to Chicago and had a couple tanks while I was in Chicago, but they just weren't very successful so I never posted anything. I was busy over-working myself and just didn't give them the time they needed. I also think the Chicago tap water was s**t, which didn't help. I've since moved yet again down to AL and am in a bit more of a stable spot. So between that and intentionally trying to make maintenance easier on myself, I am hoping to be more successful with this like I was in graduate school in CA.

At any rate, I've set up a little 60p sized tank. I've always liked that size so I was glad to pick one up back in Chicago for a good price and safely moved it down here.

Tank - 60p sized, off-brand rimless made with low-iron glass. Also has frosted film on the back and a squishy mat underneath
Stand - generic 20g stand that's very open for easy access to equipment
Light - Twinstar II
Filter - Oase Biomaster Thermo 250, stocked with one tray of Eheim filter media, one tray of Seachem Matrix, one blue filter sponge, one red filter sponge, and a bag of Seachem Purigen. I'm also using an Eheim skimmer for the moment at least. Glass pipe inflow/outflow
CO2 - 5 lb cylinder with home built regulator connected to an inline diffuser
Water - RODI system with a 30 gallon Brute trash can as a storage reservoir
Water change system - use a 400 GPH submersible pump to drain water out and also to re-add RODI water that I remineralize as it transfers (just dissolve/suspend the GH Booster amount in a cup of water and add it in increments). So glad I set this up cause a water change can be done in 10 minutes now.
Substrate - good ol' Amazonia, one 9L bag
Hardscape - a bunch of ohko/dragon stone that I apparently didn't get all the clay out of
Ferts - NilocG Thrive+ and GH Booster since I'm using RODI water

Fauna: Undecided for now. It's taking longer to cycle this tank than I've previously had. Might be related to having a fairly large amount of Amazonia relative to the filter media initially (just added the tray of Matrix today). I'm using Seachem Stability to establish the bacteria.
Anyway, will probably have some nano fish like emerald tetra or something similar (though the orange may get lost in the mostly red plants). Also will get shrimp, not sure if I want to go with some cardinia or neocardinia, but I'd like something a little more flashy than RCS at least.

The tank has been up for a little over a week now, still have some ammonia, no nitrite, and nitrates are around 5 ppm. I have had a tank cycle like that before when I never saw nitrites, so that doesn't concern me. CO2 is blasting away, still trying to dial it in for a green/yellowgreen drop checker. TDS is ~120-150 ppm, remineralized with NilocG GH Booster, so GH is about 3-4 and KH is about 1-2. I've dosed some baking soda occasionally, but I don't know how vital that is, honestly. Maybe someone with more experience with RODI can fill me in if it's worth. The Amazonia buffers the substrate, so my pH is between 5.5 and 6 ish depending on whether the CO2 is on. Water changing every day, though will switch to every other day or three days soon. Dosing nutrients at ~1/2 amount.

No algae really for the moment, but I won't hold my breath, haha. Below are some photos. So far just quick snapshots with the phone will do, but I'll eventually go for some higher quality pictures as things grow in.

Here's a pic with most of the equipment: 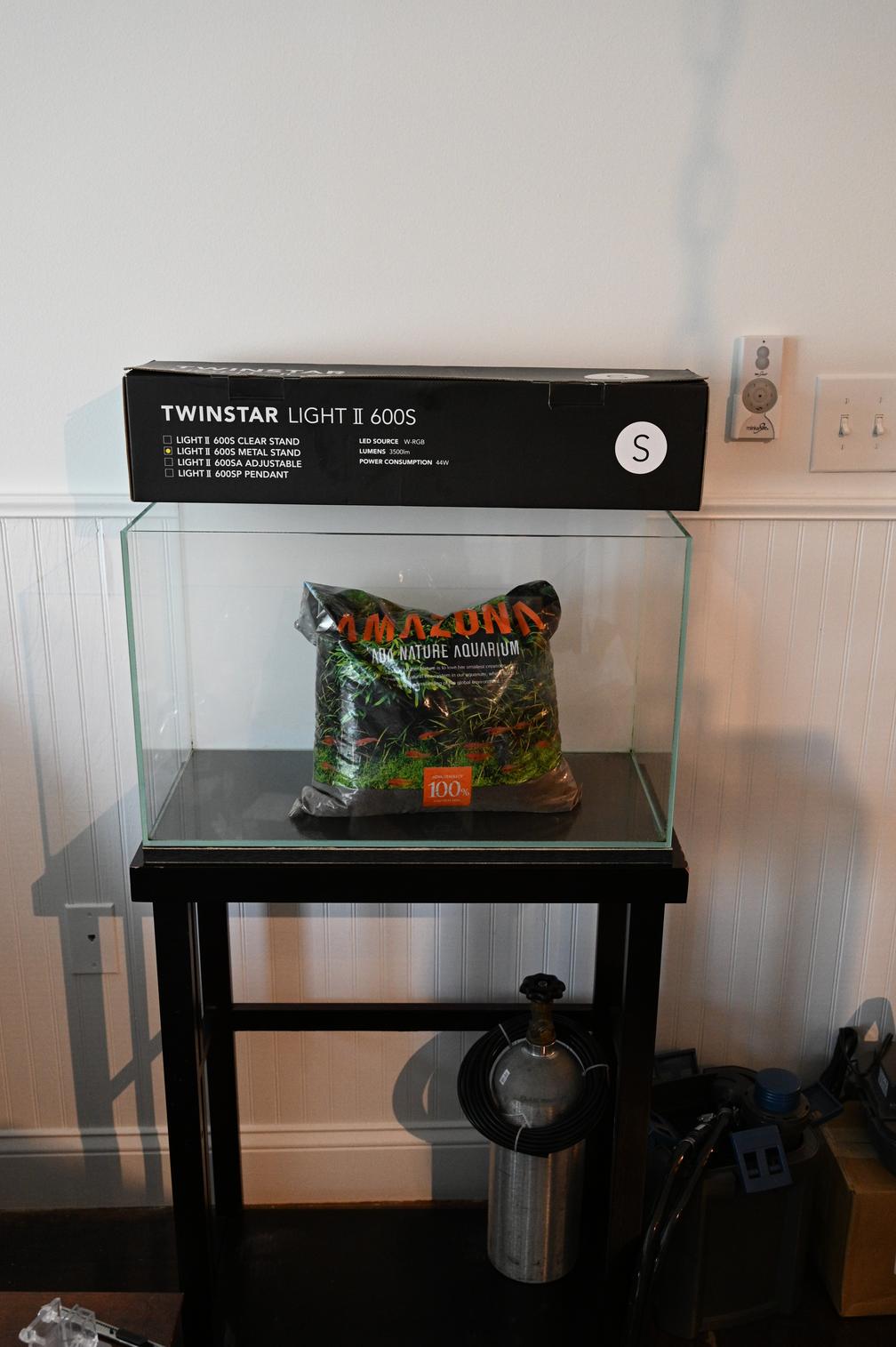 I really like this angle from my the living room... 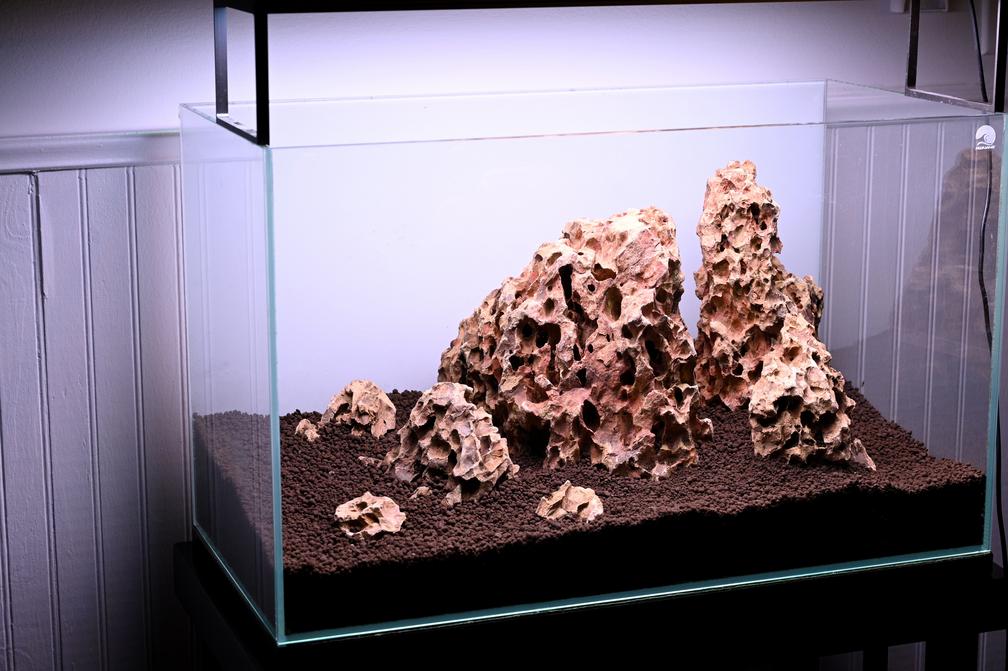 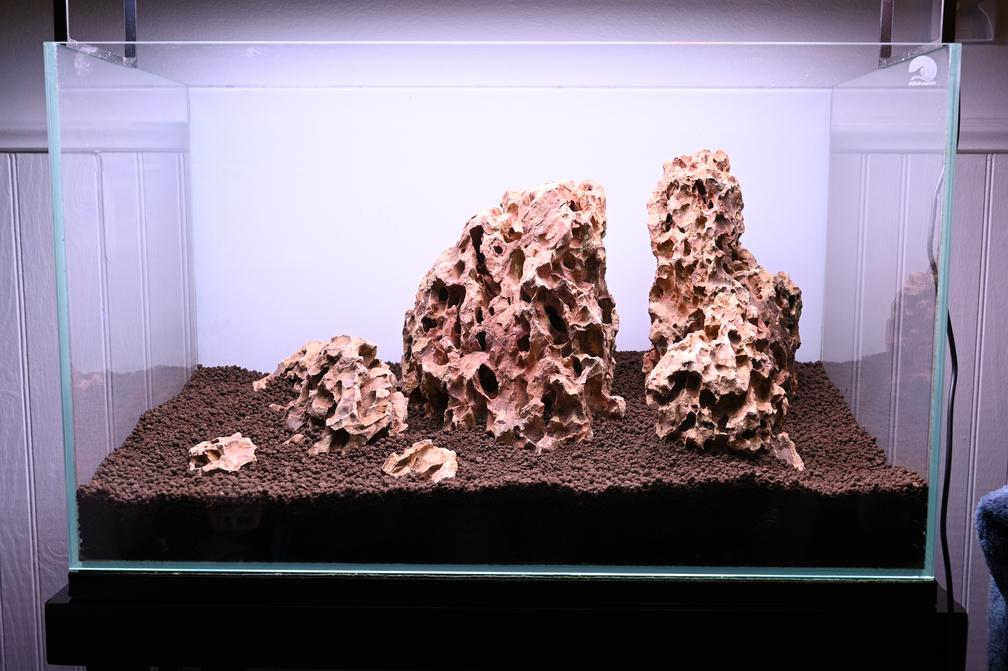 Unfortunately a plant order got stuck in the mail over a weekend and I lost about half of what I ordered. Did get some of that refunded and then ordered replacements that came in with no trouble (see next photo) 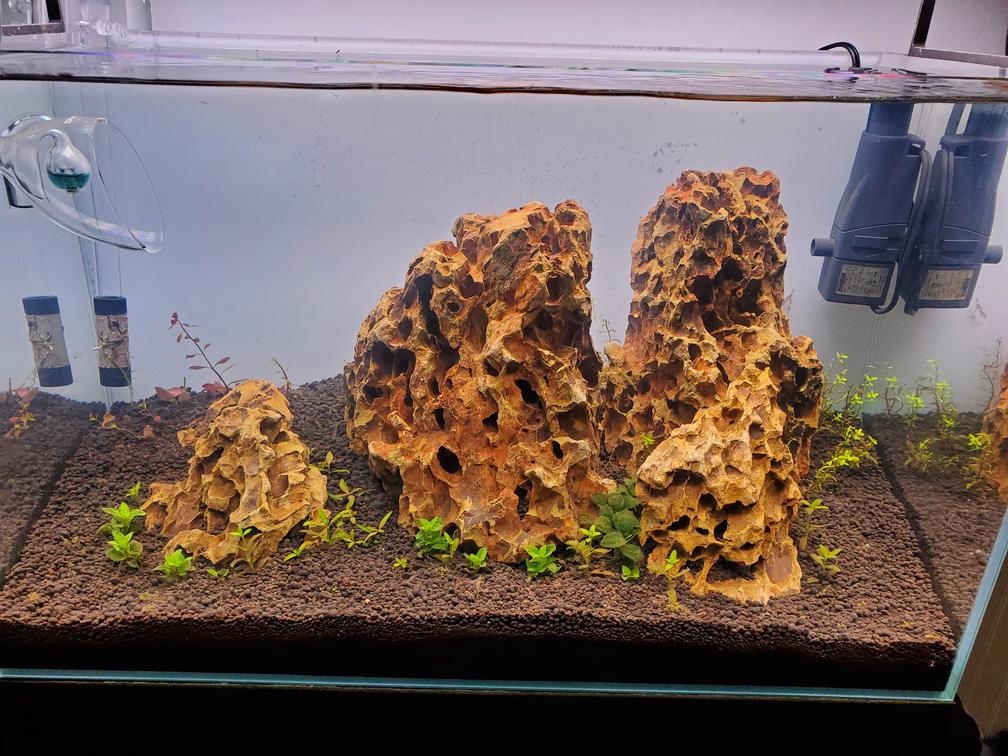 Still a little hazy from planting, but now I've got just about everything in as of yesterday (ignore the mini pellia on SS mesh, I'll take care of that this weekend). 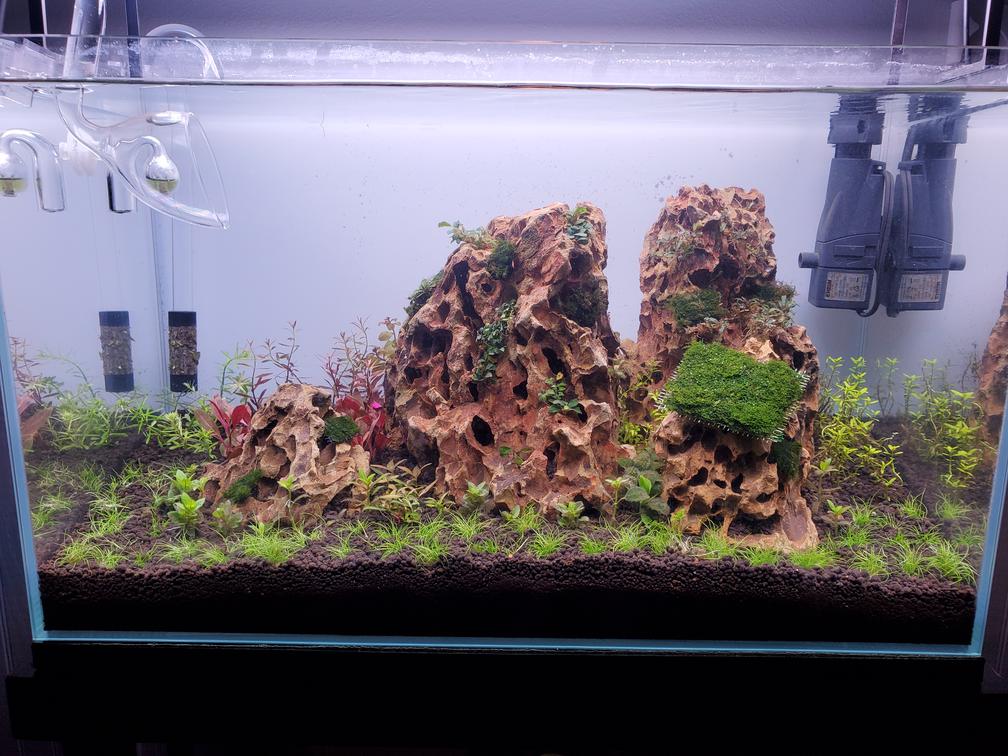 Hope you will enjoy following along as I get back into the swing of things here.

Latest tank setup July 2020
To view links or images in signatures your post count must be 10 or greater. You currently have 0 posts.

Doug
Quote:
Originally Posted by Aryanasdad View Post
I feel duped. Was so excited to see pics and they aren't there. =(
Apologies, the links should be working now as I changed image hosts. Hope the suspense was worth it, haha
Latest tank setup July 2020
To view links or images in signatures your post count must be 10 or greater. You currently have 0 posts.

(View User Tanks)
PTrader: (0/0%)
Join Date: Sep 2012
Location: Honolulu
Posts: 55
Looking good so far! I'm curious to see what you're going to do with the mini pellia as I have the same thing on a mesh mat and I'm not sure how to attach it to the hardscape.
rwong2k and ChemGuyEthan like this.
To view links or images in signatures your post count must be 10 or greater. You currently have 0 posts.
808style is online now
Quote Quick Reply
post #6 of 6 (permalink) Old 08-04-2020, 04:37 AM Thread Starter
ChemGuyEthan
Planted Tank Enthusiast

(View User Tanks)
PTrader: (17/100%)
Join Date: Apr 2014
Location: Alabama
Posts: 593
Quote:
Originally Posted by 808style View Post
Looking good so far! I'm curious to see what you're going to do with the mini pellia as I have the same thing on a mesh mat and I'm not sure how to attach it to the hardscape.
Thanks for the comment!

Well I actually didn't get to it this weekend. In the past I've just separated it from the mesh and glued it on in clumps. This time I'll probably do what I did with the fissidens and use little plastic mesh that I have (I got little 2x2" squares online, but probably plastic needlepoint mesh will work as well). I cut these into appropriate sized pieces, put a clump of moss on them, wrapped in dark green thread, then super glued a little piece of lead (saved from bunched plants I've bought) to the back to keep it from floating. This was then tucked into the holes of the rock I have. Could probably just glue this straight to a rock if you wanted. If I hadn't already have filled this, I probably would have just glued it to the rocks, but that's hard to do as is.

I did glue the buce on the rocks, a blob of super glue gel will stay squishy enough to still adhere even under water, so that was easy enough. Could maybe do that with the mini pellia too.

In regards to the tank, I'm still having unusually high ammonia. It's staying consistently at around 2 ppm by the next morning before water change. I have gone back to daily changes of 50%. Unfortunately, I should have done that sooner (I had gone to every other day) I think the persistent ammonia has cause the staurogyne repens and hygrophila araguaia to melt. Some of the hair grass seems to be struggling too. So I'll have to keep an eye on that. Removed melted bits that I could and I may have to just pull the more sensitive plants out and replace them once the ammonia is gone. Not sure why this particular cycle is going longer than others (on two weeks now), but I'll continue to do water changes and be patient and do the water changes. The stems, mosses, and epiphytes all seem to be doing perfectly fine though and some stems are developing color really nicely.
Latest tank setup July 2020
To view links or images in signatures your post count must be 10 or greater. You currently have 0 posts.