. Let's get the specifics over first.

First up just a scape only pic 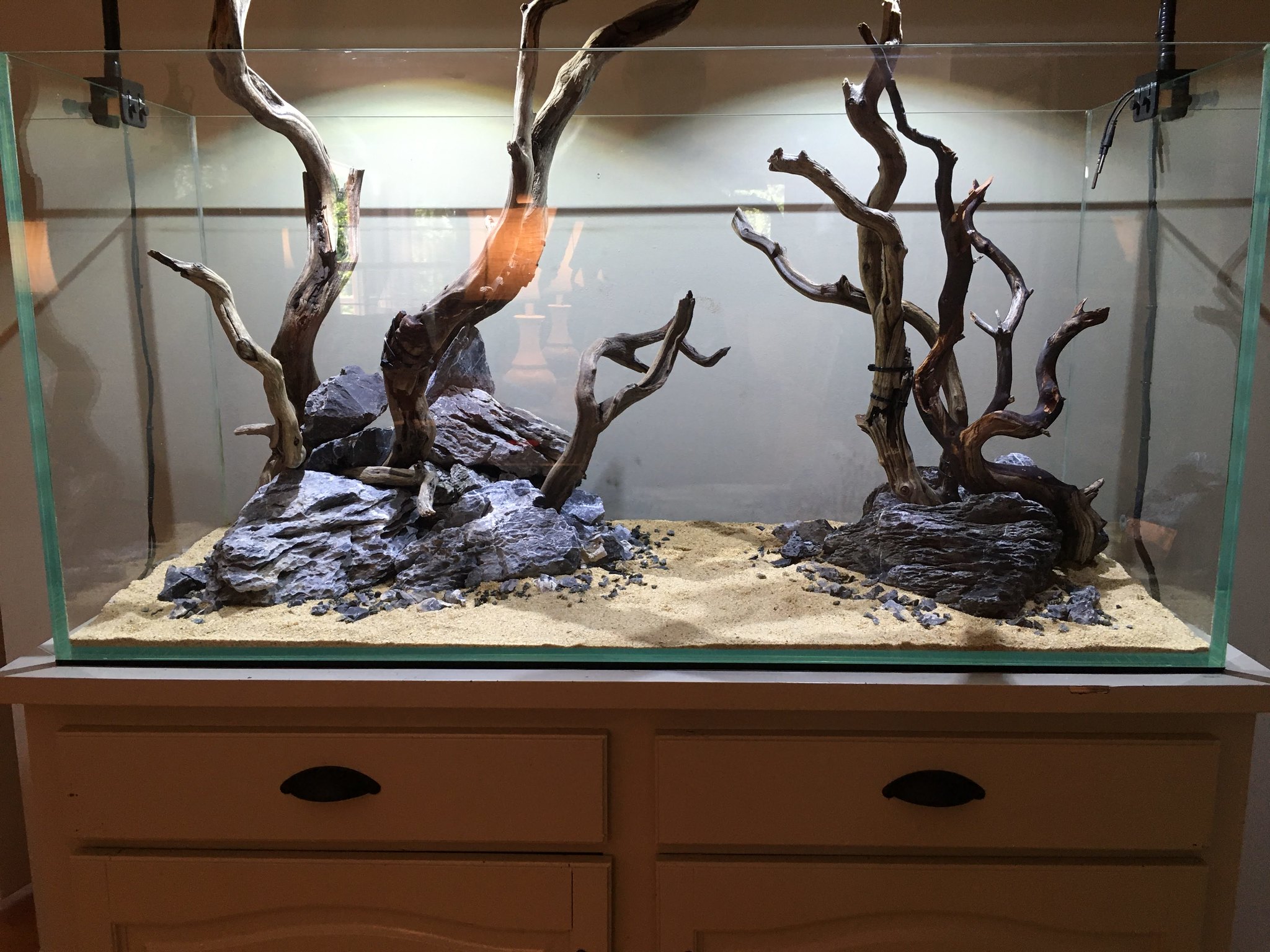 And a planted mid-water change pic. I added 44 pots of plants and it still looks really bare. I guess I'll be picking up a few more pots. I still have a basketball size trident fern from my last set up in the holding tank with the fish so I think I'll add a bit more of it. Although I'd like to stay away from having so much of it as I've had for the last ten years.

I'm trying for some emersed growth from the bolbitis and hygro pinn on the left side. 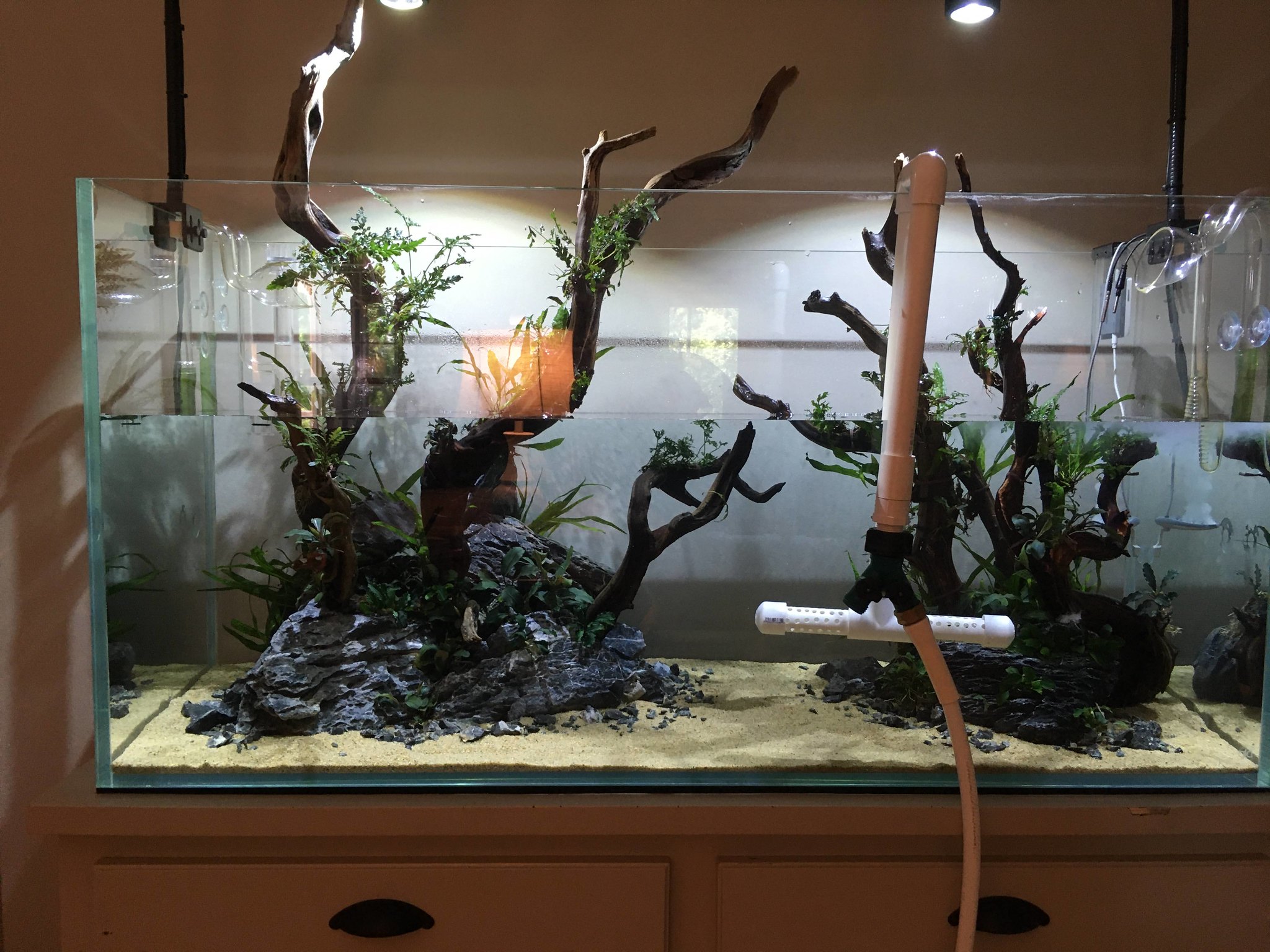 
(View User Tanks)
PTrader: (0/0%)
Join Date: May 2020
Posts: 15
Your hardscape layout looks great. I love epiphytes and am looking forward to seeing how it fills out over time. I am currently setting up a 60cm tank and am also hoping to grow some emersed hygro pinn; curious to see how this works for you.
Alex.K is offline
Quote Quick Reply
post #3 of 12 (permalink) Old 06-23-2020, 01:33 PM
Asteroid
Planted Tank Guru

(View User Tanks)
PTrader: (52/100%)
Join Date: Dec 2005
Location: TN
Posts: 3,631
Another water change pic. I seem to like those for some reason. I've in added another piece of wood on the left side toward the center. There was a gap that needed to be filled. The plants are filling in a bit and I have a few more on the way for the additional wood that I added. 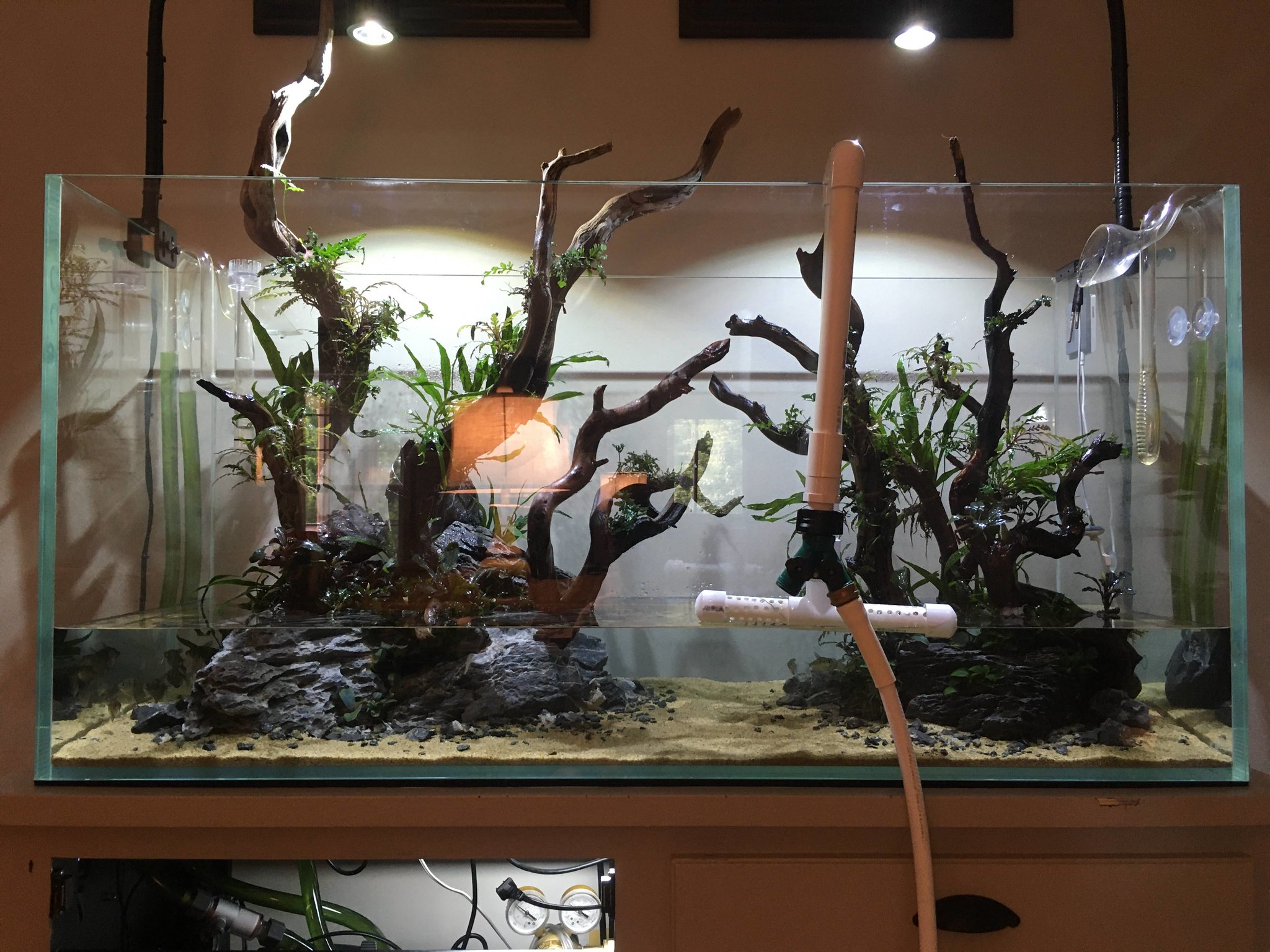 And a photo of one of my three assistants who has managed to remove three layers of paint over time. 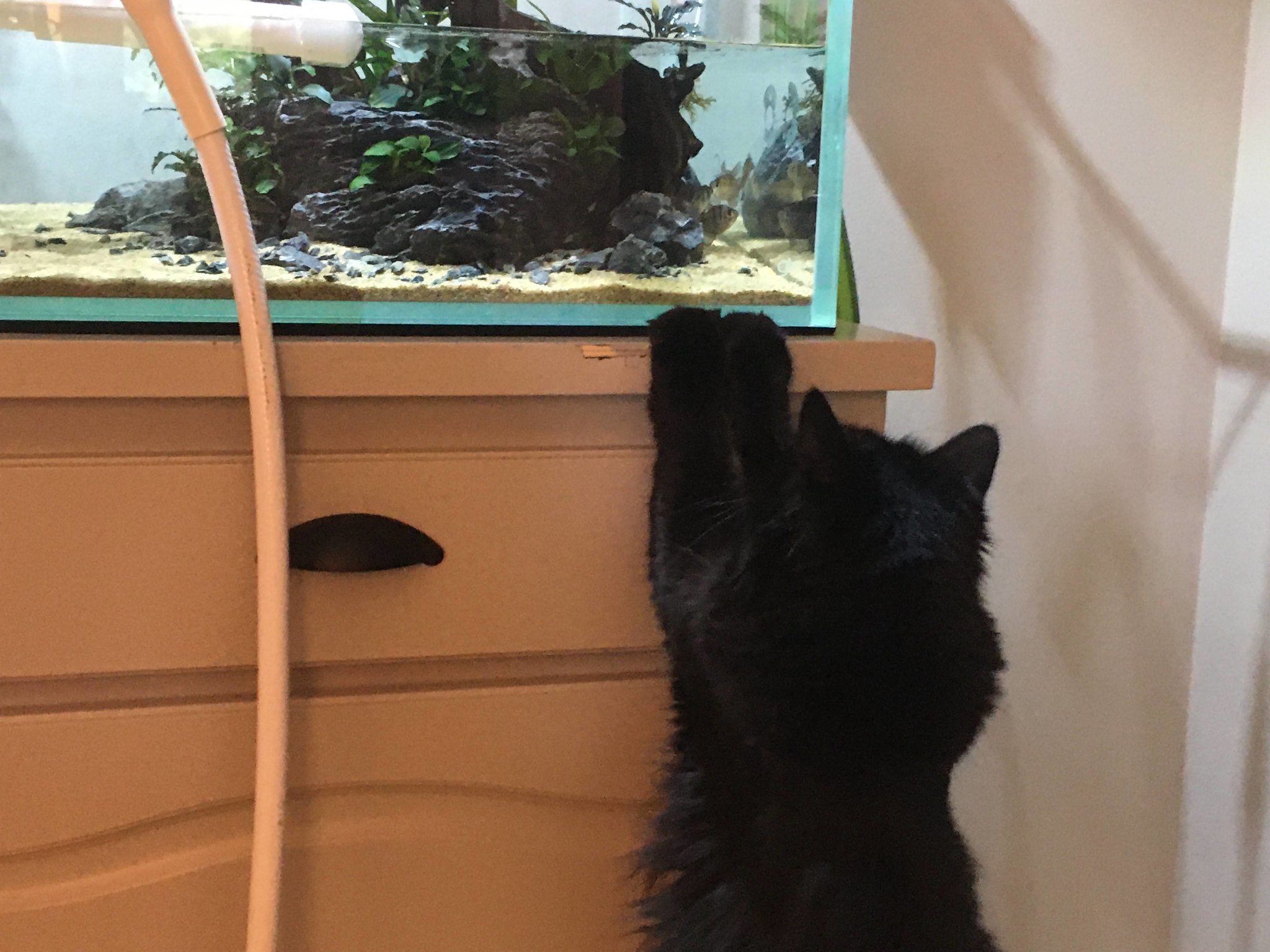 I like the glass inlet on one side and the surface skimmer in the back, great choice!

what kind of fish are you thinking about keeping?
are the kessils at 100% or turned down until things grow in?
--Oscar.
Fluval pimp #4 aka PIMP master!
I SAID ITS GREAT
TO BE
A FLORIDA GATOR!!

(View User Tanks)
PTrader: (52/100%)
Join Date: Dec 2005
Location: TN
Posts: 3,631
The green Eheim tubing is a lot more noticeable than with the last scape so it has to go. I picked up some clear tubing at HD which had some really funky chemical smell and said that it wasn't safe for beverage use so I decided it might not be safe for fish either. They had another brand on their website that is made of nontoxic material and beverage safe so I ordered some of it. Same price other than $6 for shipping.


Quote:
Originally Posted by Asteroid View Post
Looks good with the add'l piece. I always wanted to try the ADA sand, but I was always too cheap and went with PFS. i Like the color tone of it.
Thanks. It's a lot cheaper than filling a tank with AS, lol, since I just used two 8 kg bags vs four 9l bags of AS. Colorado sand is advertised as having a red tint which concerned me, but I wanted something darker than PFS. It's basically just a dark tan and works well with the stone and wood. It might have a redder appearance under warmer lights though.

Quote:
Originally Posted by monkeyruler90 View Post
I like the glass inlet on one side and the surface skimmer in the back, great choice!

what kind of fish are you thinking about keeping?
are the kessils at 100% or turned down until things grow in?
There is actually an outlet and inlet in both of the corners. Great thing about glass lily pipes, they can be hard to see at times.

There are around 25 black skirt tetras in the tank and some RCS. They're just hanging out behind the wood and rocks during the water change. Other than that they're pretty outgoing. The fish have turned into a fairly self sustaining population and do breed and reproduce occasionally but cannibalism keeps most of them from making it anywhere past the fry stage.

The Kessils are at 5% in the photo. It was before the usual lights on time. I have them set to ramp up over the course of an hour and a half to 50% where they remain for five hours and then ramp down to lights out over the next five hours. They're sitting around 34 inches over the substrate. I like the lower light vibe, especially in the evening, with the epiphytes and wood. You get a lot of shadows and ripples with the kessils and it has a darker, woodsy feel that I like and find relaxing.
Last edited by Jeff5614; 07-08-2020 at 09:20 PM. Reason: ...
Jeff5614 is online now
Quote Quick Reply
post #8 of 12 (permalink) Old 07-24-2020, 06:34 PM Thread Starter
Jeff5614
Planted Tank Guru

(View User Tanks)
PTrader: (52/100%)
Join Date: Dec 2005
Location: TN
Posts: 3,631
Starting to fill in a bit more. The pic is a bit dark but it's early on in the ramp up. I replaced the green Eheim tubing with some clear stuff. I should have done that long ago. The H. pinnatafida needs to be topped to get some bushiness and branching going and the buces keep sending out flowers and have also filled in a bit more than I had expected at this point. I also trimmed all of the emergent leaves from the bolbitis to promote new submersed growth. There is new growth but it's slow.

It's hard to tell from this angle, but I added more stone to the right side. Probably another twenty pounds or so. 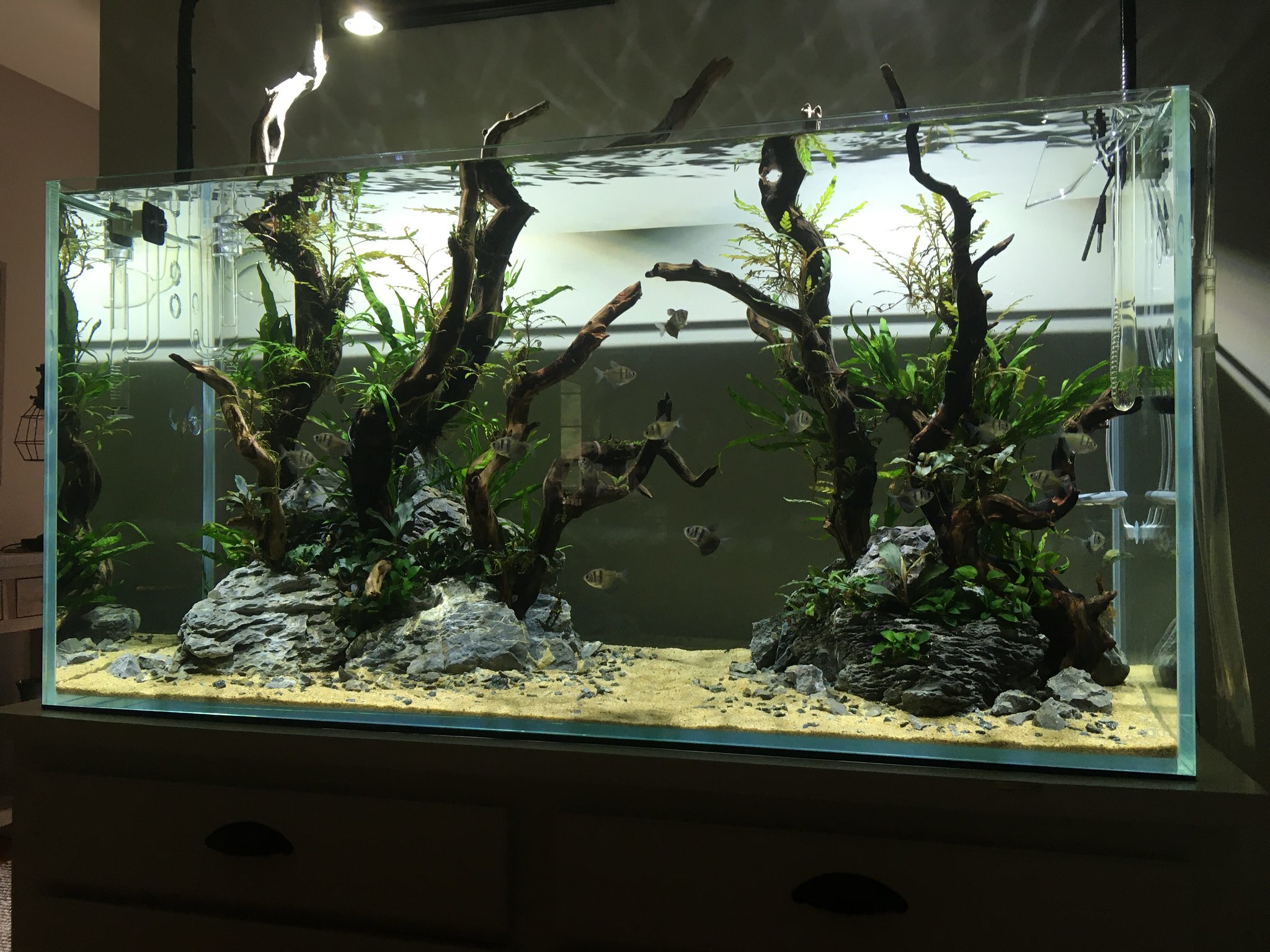 And some pinnatafida growth above the waterline. 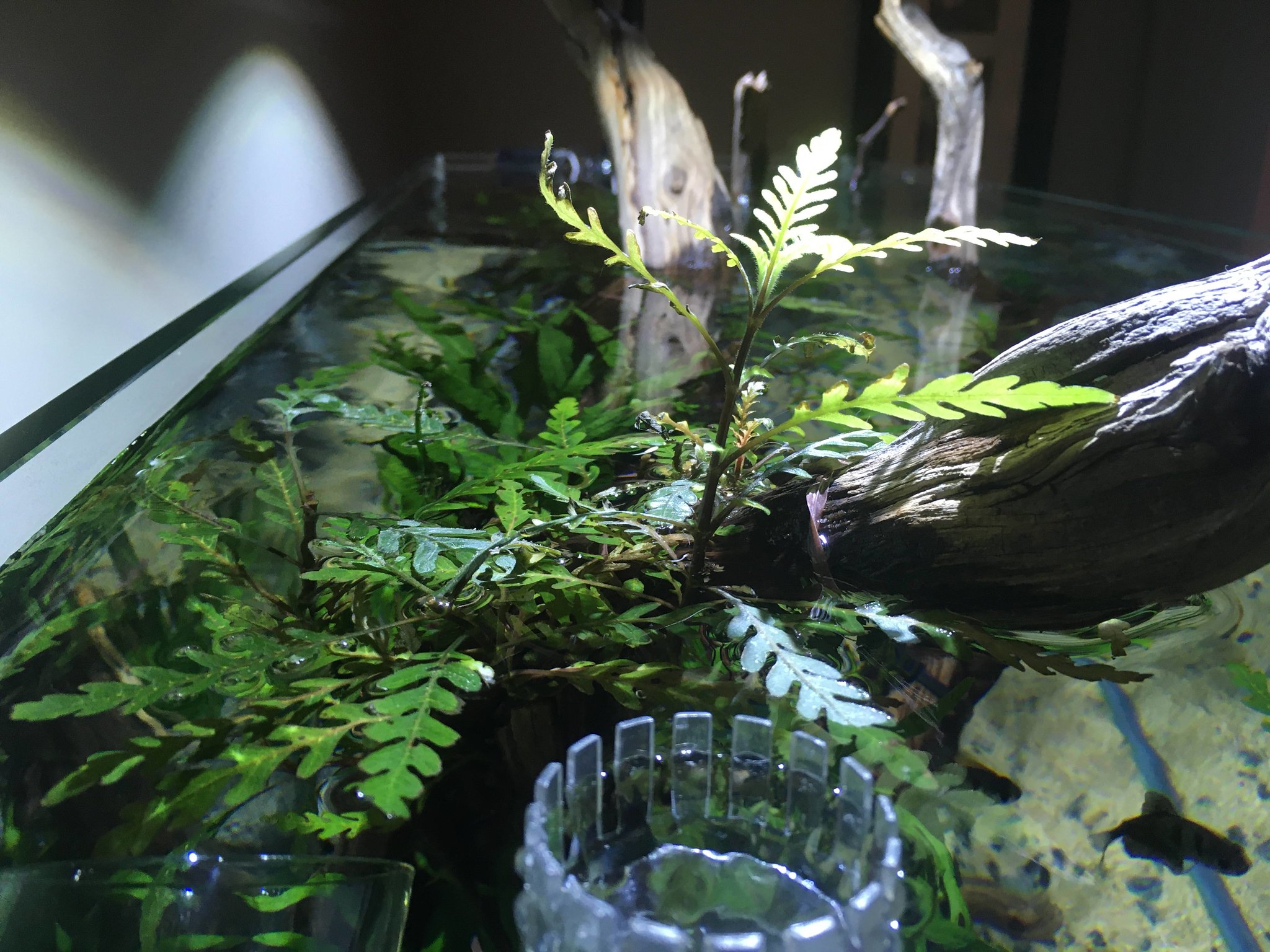 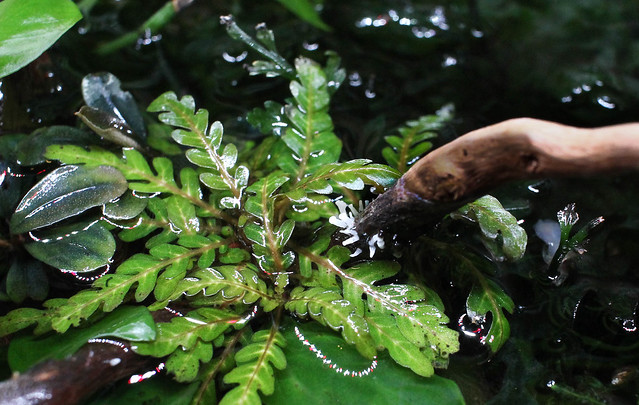 (View User Tanks)
PTrader: (52/100%)
Join Date: Dec 2005
Location: TN
Posts: 3,631
Quote:
Originally Posted by Asteroid View Post
Looks good! I've had pinnatafida at the waterline for 6 months and I can't get it to grow up like that. It kinda hovers over the top. Did you buy yours as emersed?

Thanks. That would be my guess. I bought them from one of the online retailers in pots so you know they were farm raised which means most likely emersed.
Jeff5614 is online now
Quote Quick Reply
post #11 of 12 (permalink) Old 07-24-2020, 08:27 PM
Asteroid
Planted Tank Guru