(View User Tanks)
PTrader: (0/0%)
Join Date: Jan 2013
Location: Melbourne, Australia
Posts: 167
Lounge Paludarium
Hi all. This is written for an Australian audience and is posted on a forum there but I thought I'd share it here too.

I haven’t had an aquarium for about 5 years. I moved house back then and always intended to set a couple up. But life gets busy, and we do other things. There were a lot of plants I kept. The low light plants went in a very low light 10L tank with no light in my bedroom where they have stayed for 5 years with no maintenance other than topping the water up when the filter sucked air and occasionally doing a water change. I haven’t even cleaned the filter that whole time

So now I have decided to get off my arse and do something with my tanks.

I’m a keen gardener, and I love indoor plants, so I decided I want to try a paludarium would be a good project. I started by removing the braces on my 90x45x45 tank (I only intend to fill it just over half full of water), dragged out a stand I also made 5 years ago and found a spot to put it. I grabbed a piece of wood I have also had sitting out the back of the house for all those years and put it in the tank. It was too big for the tank, but it’s a beautiful piece I collected, and I haven’t used it yet. I used some pine bark to simulate the soil I’d be adding and then added some rocks I also had from when I used to live on a farm. As usual, I totally changed the design I had in mind and now. I finally decided I would trim the wood to make it fit. I cut a couple of smaller pieces off and cut through one big branch and glued it back on in a better direction.

Growing up on a farm has given me many things that I’m grateful for. One of them is I’m fairly handy, and I love solving problems. If I can make something well enough myself, I do. I decided I wanted to make my own ‘soil’. I have bought Aqasoil once before, but every time I look at it I cringe at paying good money for some clay. So yet again, I set out to find a recipe. I found so many and read a lot of stuff I read years ago. Anyone who has researched this will know that in the USA they all seem to use this Miracle Grow Organic ‘soil’ bla bla bla. Yep, it works, but I also hear most of them say it’s the best thing once it’s settled in, meaning they get huge ammonia spikes for a start. I’ve never seen the stuff in person, but I know a few things about potting mix, and I doubt it’s any different from any we get here in Australia. Calling it ‘soil’ or ‘dirt’ is misleading, I think. To me (and scientific definitions) soil is a mix of organic and inorganic material that covers the ground. There are a lot of different types of soil, but calling potting mix ‘soil’ is leading a lot of people down the wrong garden path. It’s pretty much 100% organic matter composted to make it suitable to grow plants (most aren’t even very good at that, but that’s a whole other story). Back to ammonia spikes. Well, that’s no surprise to me when all of that fine organic matter is introduced to water. Excess fish food, dyeing plants and fish poo are no different and yet we are told that’s harmful and get rid of it so we kill our fish. Most of us spend time and money setting up filters to get rid of it. So why would I expect that adding a tonne of that to my tank will somehow be different? Well, I don’t.

From what I’ve seen, in most aquatic environments, plants are growing in mud (high percentage clay) or sand/gravel with some organic matter on top it if the water is slow enough. From the look of it, Aquasoil is made from clay and probably some organic matter because it’s very dark and organic matter tends to be that way. It also gives off a lot of ammonia. From what I’ve read, I presume this is because of high CEC (cation exchange capacity) making a better percentage of some nutrients available for plant roots. So I found some cat litter made from Laterite (according to the package) and mixed that up with peat moss and sand. I don’t know if the peat will cause ammonia production. Anyway, I’m not concerned. I rarely add fish soon, and this setup is mainly for plants, so I don’t care how long it takes to cycle and balance its self. Any fauna will be an added extra.

I also got a massive cooking pot my work neighbour had (too cook a lot of rice) and boiled my driftwood. I didn’t do this to remove tannins or anything else. I just wanted it to waterlog faster.

I added my soil mix and topped it with gravel, placed my wood in and arranged some rocks. I filled the tank and thee wood floated anyway so I put a big rock on that. I’ve rigged up my Eheim Professional 2326 (got it for $50 second had a few years ago) and go the water moving. I stirred up the mulm in the 10L plant tank I had and added it to the water. At this stage, I still have a fair bit to do before planting bt way of lighting and some water for the exposed wood. I want to grow moss and ferns all over it.

Farmer likes this.
my 20 gallon journal:
To view links or images in signatures your post count must be 10 or greater. You currently have 0 posts.


my 8 gallon journal:
To view links or images in signatures your post count must be 10 or greater. You currently have 0 posts.


my 35 gallon journal:
To view links or images in signatures your post count must be 10 or greater. You currently have 0 posts.
andrewss is offline
Quote Quick Reply
post #4 of 10 (permalink) Old 06-14-2020, 01:13 AM Thread Starter
Farmer
Planted Member

Doug
Ah, didn't realise images had to be hosted on this forum. I'm used to having to host them elsewhere.

(View User Tanks)
PTrader: (0/0%)
Join Date: Jan 2013
Location: Melbourne, Australia
Posts: 167
Quote:
Originally Posted by chicken.nublet View Post
Your pictures still don't seem to be visible unfortunately.
Interesting. They are for me. I just tried in an incognito window and in a fresh browser in case it was just in my cache. If they aren't working now I don't know what to try.

Did you look before and come back to check? Maybe it's a cache issue at your end.
Farmer is offline
Quote Quick Reply
post #7 of 10 (permalink) Old 06-14-2020, 12:46 PM
chicken.nublet
Planted Tank Obsessed

(View User Tanks)
PTrader: (0/0%)
Join Date: Mar 2018
Location: Singapore
Posts: 303
Quote:
Originally Posted by Farmer View Post
Interesting. They are for me. I just tried in an incognito window and in a fresh browser in case it was just in my cache. If they aren't working now I don't know what to try.

Did you look before and come back to check? Maybe it's a cache issue at your end.
Not sure why, but I still can't see the pictures. They aren't showing up on my laptop (after clearing cache) and phone. Might be a problem at my end but I hope they work for everyone else.
chicken.nublet is offline
Quote Quick Reply
post #8 of 10 (permalink) Old 06-14-2020, 06:30 PM
Desert Pupfish
Planted Tank Enthusiast

(View User Tanks)
PTrader: (0/0%)
Join Date: Jan 2013
Location: Melbourne, Australia
Posts: 167
Finally! I have my lights at least operational, I havent quite got them finished, but at least I can plant.
The housing is made from old pallet timber that Ive stained. I like it.
I have planted the submerged part with the plants I have. I may well add more, but I want to see how they grow first. I will probably add some more terrestrial plants or epiphytes. I want to add some moss to the branches out of the water, but I want to rig a small pump to wet them first. 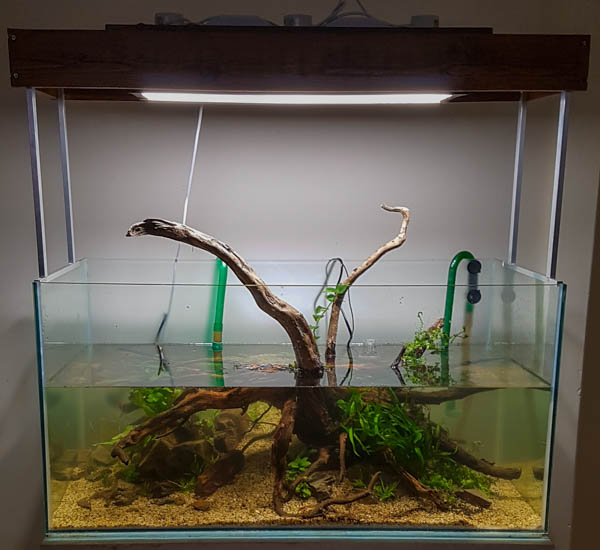 Next, I need to get some CO2 happening.

I was thinking of stocking congo tetras, but I reckon they are a little big for the space. I have very soft, neutral water out of the tap, so I mas a swell go with that. Im thinking cardinal tetras and a couple of dwarf cichlids, maybe blue rams.

I think Ill have to do that tomorrow. I think we are headed for a lockdown announcement tomorrow.
Farmer is offline
Quote Quick Reply