About 6 months ago I started to build a new heavily planted tankat first, I was thinking of 120 gallon long tank 6' x 18' x 18'...but decided I really like having the 2 depth. I looked at getting a custom rimless tank that would be 6 x 2 x 20 tall. I was about to pull the trigger, but in the end had a hard time justifying almost double the cost of a standard 180 gallon tank 6 x 2 x 2.
I really like the setup that Sascha Hoyer had for a Carnivore Island. I liked how it had a island of plants that came up out of the water. I thought with a 6 tank would give me enough space to get the roots out of the water on a 2 high tank and still allow room fish to swim aroundmaybe I would get discus again.

So then the purchasing startedpretty sure it became an addiction. New lights, filters, substrate, hardscape materials, plumbing parts showing up everyday. I was able to use some items from my old setup. Every night after work was fish tank night for a while.

I was really hoping to do this journal as I was going, but with work and kids made it difficult.

wow, coming back into the hobby and going all out on a 180! that's the right way to go

Tank looks very nice, love the big piece of wood, it'll definitely fill in right once the plants grow in.

good set up with the lights placed high, how do you feel the 3 lights flood the tank?

Excited to see this grow!
--Oscar.
Fluval pimp #4 aka PIMP master!
I SAID ITS GREAT
TO BE
A FLORIDA GATOR!!


To view links or images in signatures your post count must be 10 or greater. You currently have 0 posts.
monkeyruler90 is online now
Quote Quick Reply
post #3 of 12 (permalink) Old 05-20-2020, 12:36 AM Thread Starter
bwagner
Algae Grower

(View User Tanks)
PTrader: (3/100%)
Join Date: Apr 2007
Location: Williston, Vermont
Posts: 87
Not at all. With my old 120 gallon, I always had problems with getting enough light to grow carpeting plants. So I went with the Kessil 360X Tuna Sun...they are great. Cant wait till they can be controlled but Apex Neptune.
Greggz likes this.
bwagner is offline
Quote Quick Reply
post #4 of 12 (permalink) Old 05-20-2020, 12:43 AM
Greggz
Planted Tank Guru

Looking forward to seeing where this goes and learning more about the entire set up.

(View User Tanks)
PTrader: (3/100%)
Join Date: Apr 2007
Location: Williston, Vermont
Posts: 87
Since setting it up I added a dosing system. I used/stole SuRje1976 idea to automatically dose micro/macros directly into the output of one of the filters. 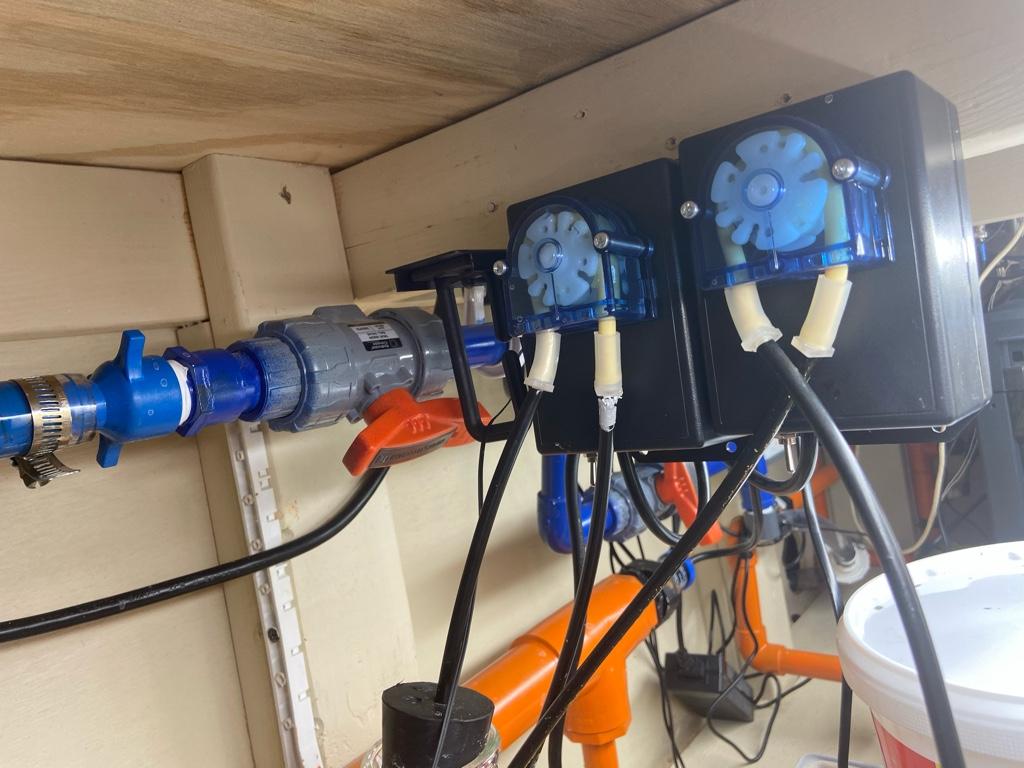 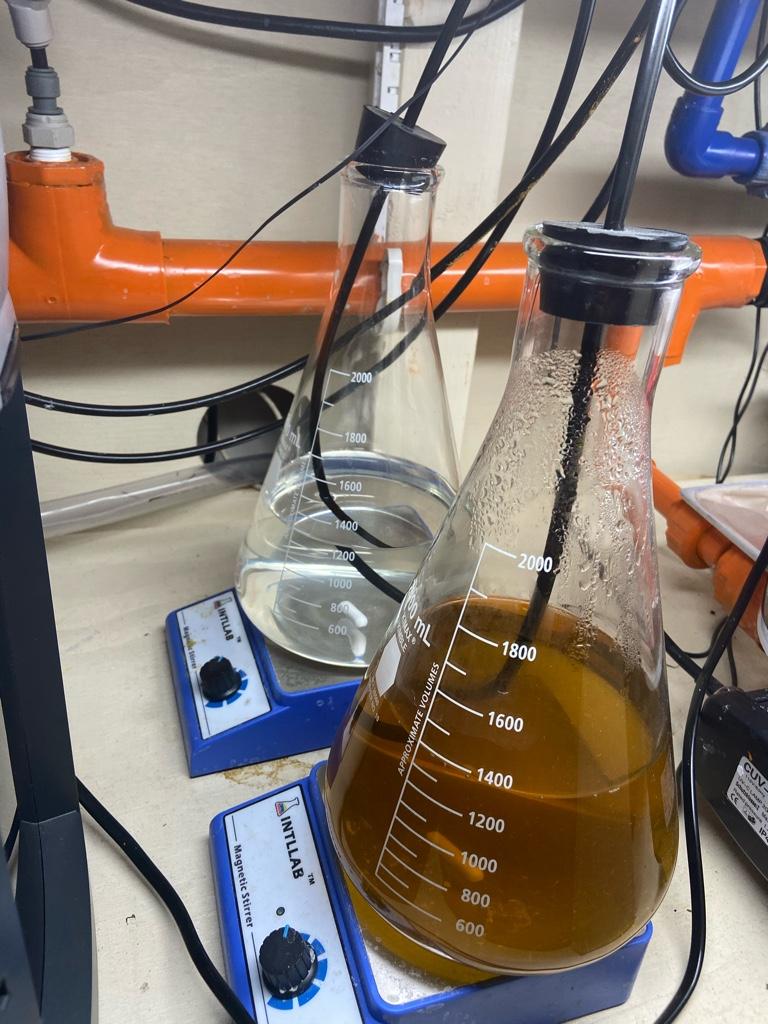 Works great! I used a similar set up in my old 120 gallon tank. Paired with the apex it makes it easy to increase/decrease dosing as needed.

(View User Tanks)
PTrader: (3/100%)
Join Date: Apr 2007
Location: Williston, Vermont
Posts: 87
I struggled for about a month with cloudy/dirty water. All my own fault. I never rinsed the substrate Flourite Black ((21) 15.4lb bags) prior to putting it in, so when I filled the tank it from day one it was super cloudy. I was using RO water (That is pumped up from the basement. 55 gallon per day system, into a 100 gallon container. Ill show pictures later of that setup), so I could only get about 80-90 gallons of water out at a time. I should have just drained the tank and started over, but I did not. I thought that running the filters and doing 50% of the water at a time would make it betterbut took a lot longer than it should have.

Once it started to clear up, I added plants, but by adding plants I just made the water cloudy again and started the whole process of dealing with cloudy water again.

Finally, it started to clear up, I added some fish for some more bio load. Surprisingly, I never lost a single fishexcept for 2 that jumped out lol.

I really wish I took more photos during those first few months, but this is it after running for about 4 months.

This is the first picture I took of the tankdo not judgenot a great picture, as I am still learning on how to take photos of it..and wasn't planning on posting...but I learned a lot during the process, and hope I can help anyone else learn from my mistakes.

At that time, I was still running a 3rd filter setup with filter floss to remove the particulates that were still coming up every time I did anything in the substrate.
So for any one else starting a tankrinse your substrate first!

What I liked about the tank were the "branches/roots" going thru the tank. Unfortunately it really limited the light that was able to reach the bottom of the tank. I was fine with the area under the "island", as it has a bunch of crypts that can still grow. I didn't like how it limited plant area by 50%.

I ended up putting (2) lights in the center of the tank, one more toward the back and one toward the front, thus allowing more light to reach the bottom of the tank. I then did a DIY light pendant with a screw in LED Light bulb...It worked...kinda. (2nd photo)

The problem was the DIY light was not bright enough for the plants on the island and started to wilt/stunt growth. So I ended up getting a 4th Kessil and put that over the island...much better. I ended up finding a "shade" on evilbay that limits the blinding light for anyone in the room. (3rd photo)

I still struggled with growing mid level plants because the "branches/roots" going thru the middle of the tank....so last week I decided to trim one...best. I thought about just giving up on the middle and doing some more low light plants...but what the heck...it's a planted tank. (4th photo) I had to dig up some of the gosstostigma, it appears i had some Asian leeches tag along on some plants I ordered. I ended up digging some up to identify them. I found out they are just a nuisance for the tank, and do no harm to the fish/plants and should not over populate. If not the case, I'll be tearing this thing down and starting over...ugh.

I will see how the next couple weeks go, but so far seeing some good grown on the mid ground plants in that area.

I have been modifying my dosing every 3 weeks based upon the weekly testing.

There is no standard (starting point) for an 180 gallon tank on a chart.

Also when using the online calculator with the K2SO4 (Potassium) it was having me put in 3-4 times what GLA and others on this site had recommended.

I don't test for Potassium, so if anyone has any opinions/suggestion on changing what I am doing, I'm open to feedback. Same with CSM+B.

(View User Tanks)
PTrader: (0/0%)
Join Date: Mar 2020
Location: Texas
Posts: 23
This is very exciting! I'm excited to see how it comes along. The way you describe coming back to the hobby is almost exactly where I expect to be in the next decade. I'm curious to hear how you dial in your lights. I had a 2' deep 55 gal for a couple years that I could not get appropriate light levels for, even with the Coastal light I was using. Not sure if it was my fault or not, but it probably was to some extent. Really enjoy your driftwood and will be glad to see it progress!
"What we learn to do, we learn by doing." - Aristotle (385-325 BCE)
WaterWelder is offline
Quote Quick Reply
post #11 of 12 (permalink) Old 05-21-2020, 07:58 PM
Discusluv
Planted Tank Guru

(View User Tanks)
PTrader: (4/100%)
Join Date: Dec 2017
Location: Elk Grove, California
Posts: 4,874
What a beautiful tank.
Thanks for sharing.
Still thinking about discus?
To view links or images in signatures your post count must be 10 or greater. You currently have 0 posts.

(View User Tanks)
PTrader: (3/100%)
Join Date: Apr 2007
Location: Williston, Vermont
Posts: 87
Quote:
Originally Posted by Discusluv View Post
What a beautiful tank.
Thanks for sharing.
Still thinking about discus?
Thank you! I look at brown/green discus every week lol. I really wanted to get back into them. But when I had them I always struggled with the planted needs and the discus needs. I remember always wanting to do more plants but couldnt because of the temp of the discus needs. Maybe an excuse form me to get another tank...