(View User Tanks)
PTrader: (1/100%)
Join Date: Jan 2016
Posts: 59
Amp's 25 gallon cube
After being out of the aquarium hobby in general for a few years, I decided to at least set up another planted. Can't spare the money nor the time for another reef system, even if I'd like to. Anyway, on to details:

May eventually remove some Cyperus to include some sort of contrasting stem if I'm feeling cute, idk. Also considering some Riccardia, which I think would look nice.

I kept the tank dark for the first 10 or so days and just changed water daily. It took a total of nearly 2.5 weeks to finally clear up. Added the first few plants after that and kept the light off for about another week until the rest arrived.

Tank is now fully stocked with plants, so just waiting for growout now. Below are the startup pics before the rest of my plant order arrived -- should've gotten some of the hardscape before I added water...

I'll get some updated pics soon 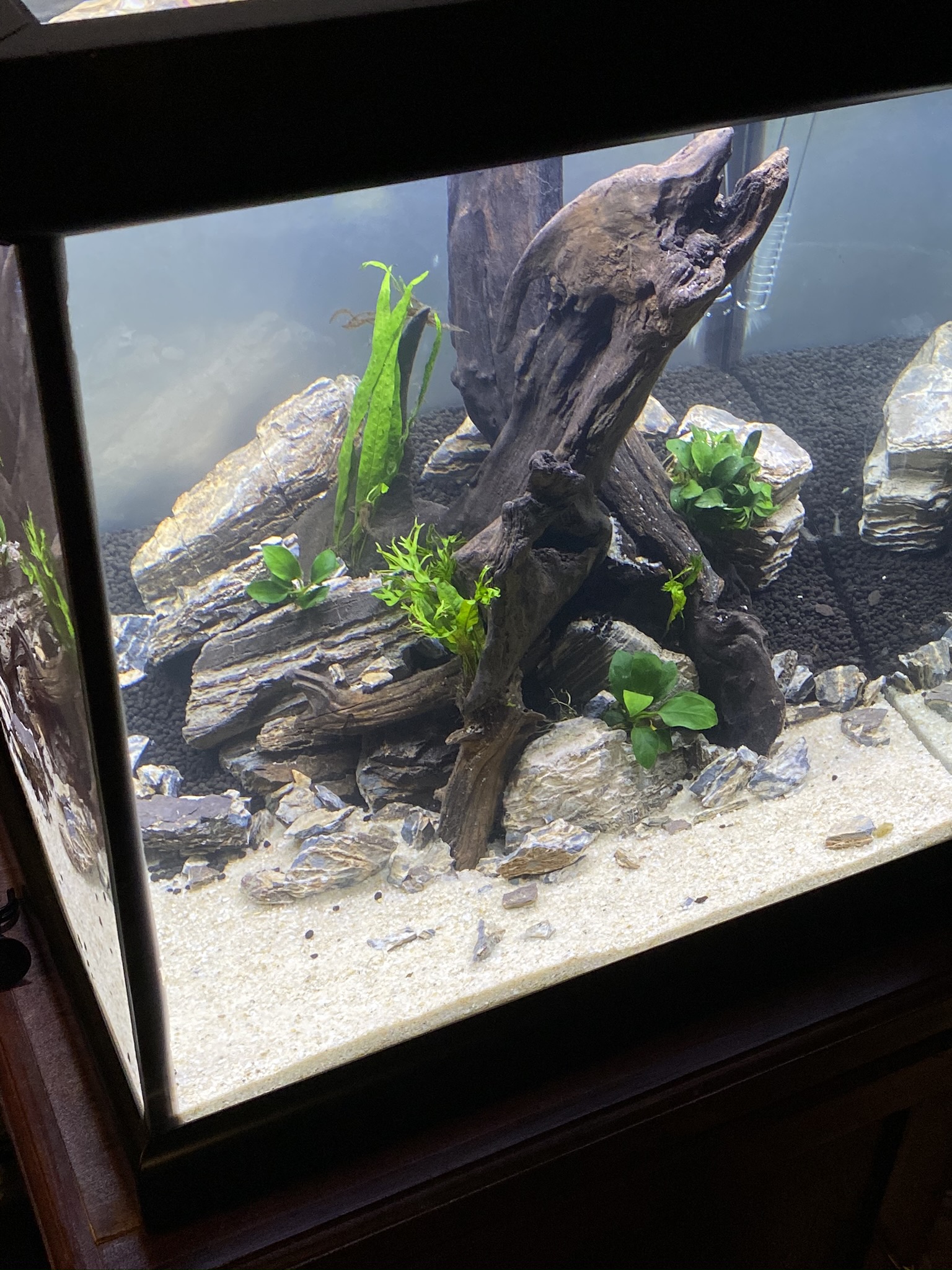 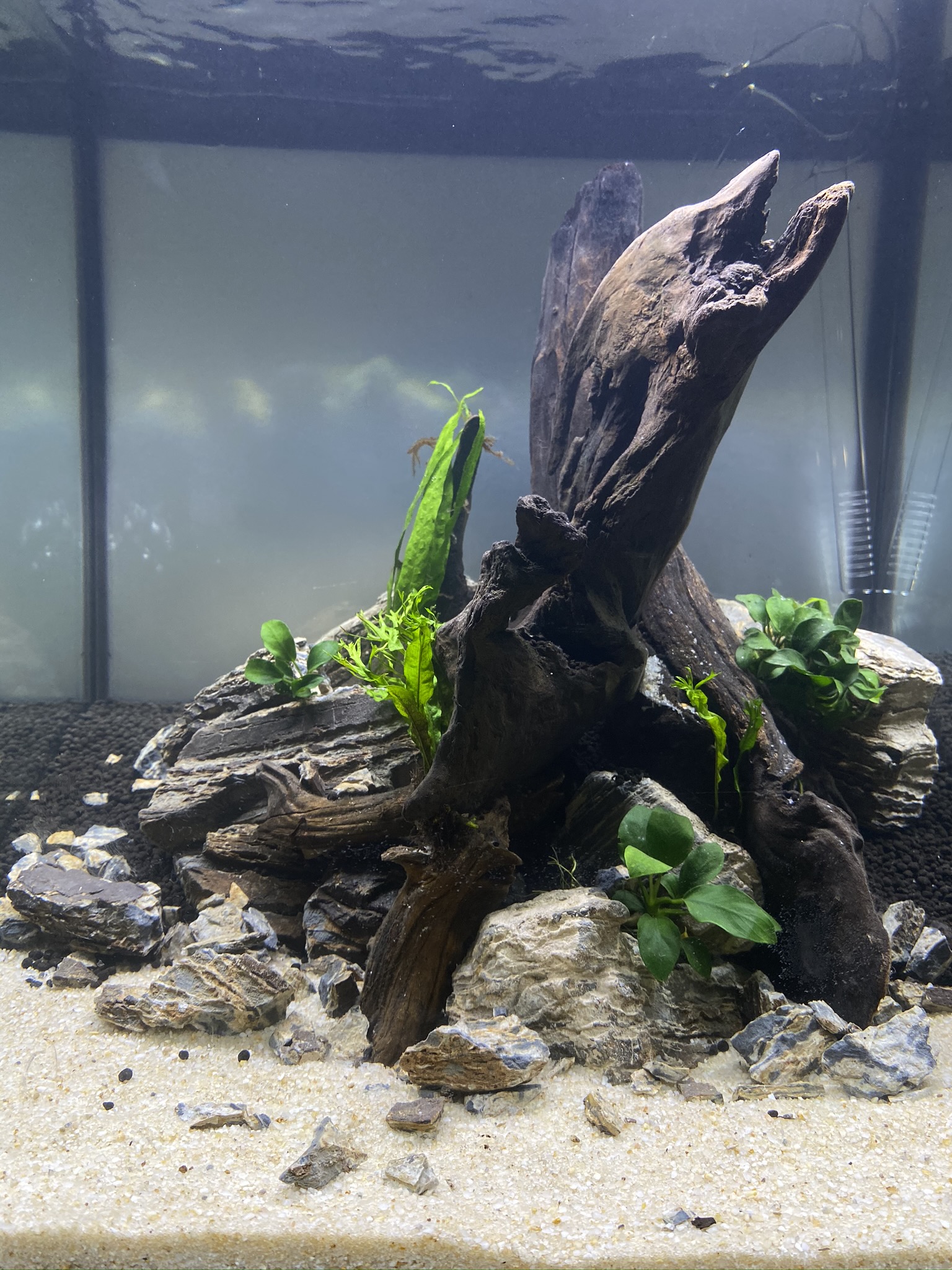 (View User Tanks)
PTrader: (0/0%)
Join Date: Mar 2013
Location: nc us
Posts: 165
Great looking hardscape. Excited to see with the rest of the plants and as it grows out. Cheers
To view links or images in signatures your post count must be 10 or greater. You currently have 0 posts.
schooldazed is online now
Quote Quick Reply
post #3 of 9 (permalink) Old 02-05-2020, 11:23 PM Thread Starter
Amphiprion1
Algae Grower


(View User Tanks)
PTrader: (1/100%)
Join Date: Jan 2016
Posts: 59
Aaaand about 5 days after planting with all the main plants I want. I did end up removing a specimen of Cyperus helferi to make room for a clump of Rotala rotundifolia, which is too short to be seen atm--it is essentially obscured by the driftwood on the back center-left. Already getting fresh, new growth on everything, so hopefully it all fills in nicely after a few trims of dead/emersed leaves. Note that this pic was taken during the time the second fixture is on, so only within a 3 hour window is it this bright. 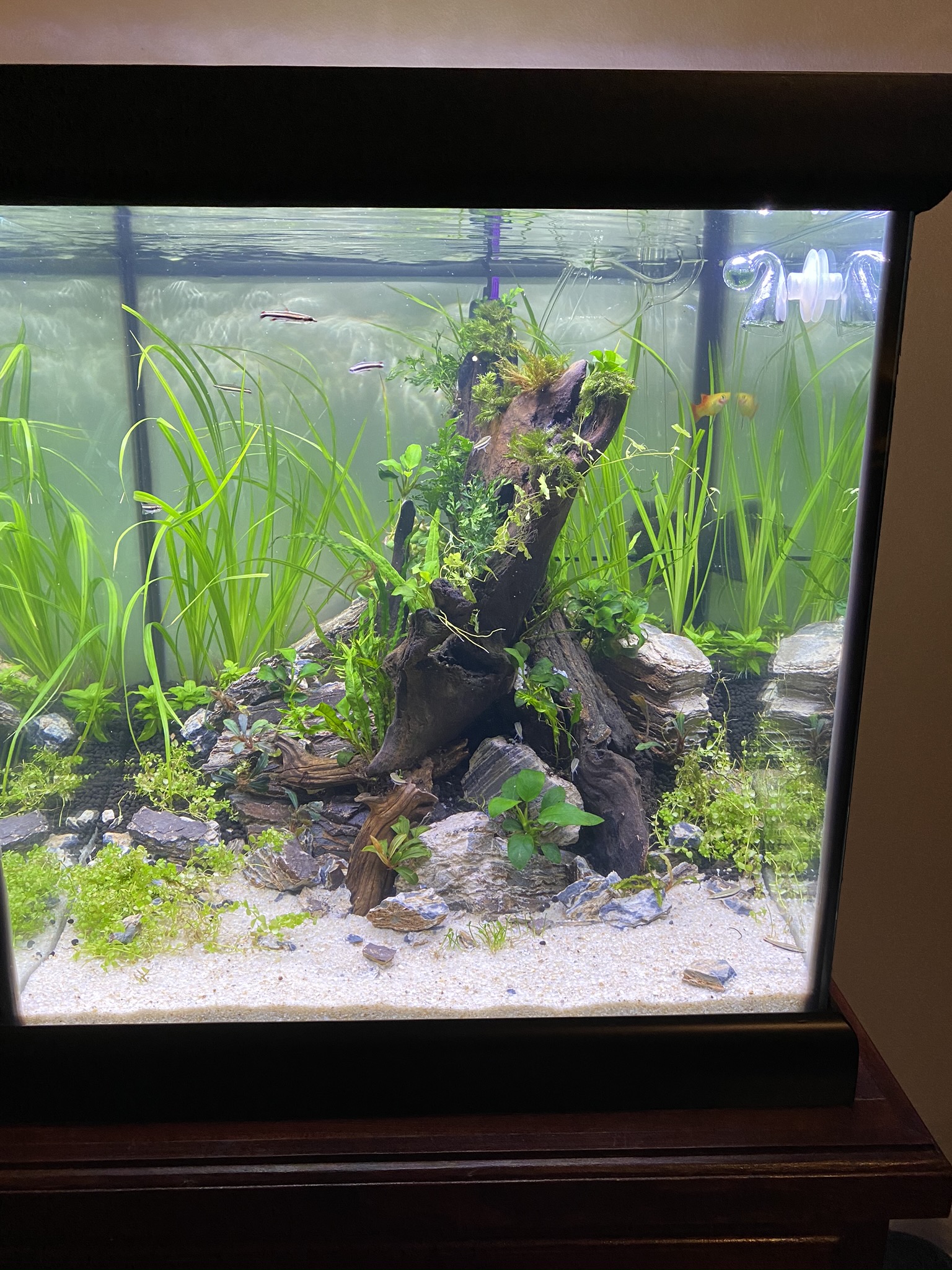 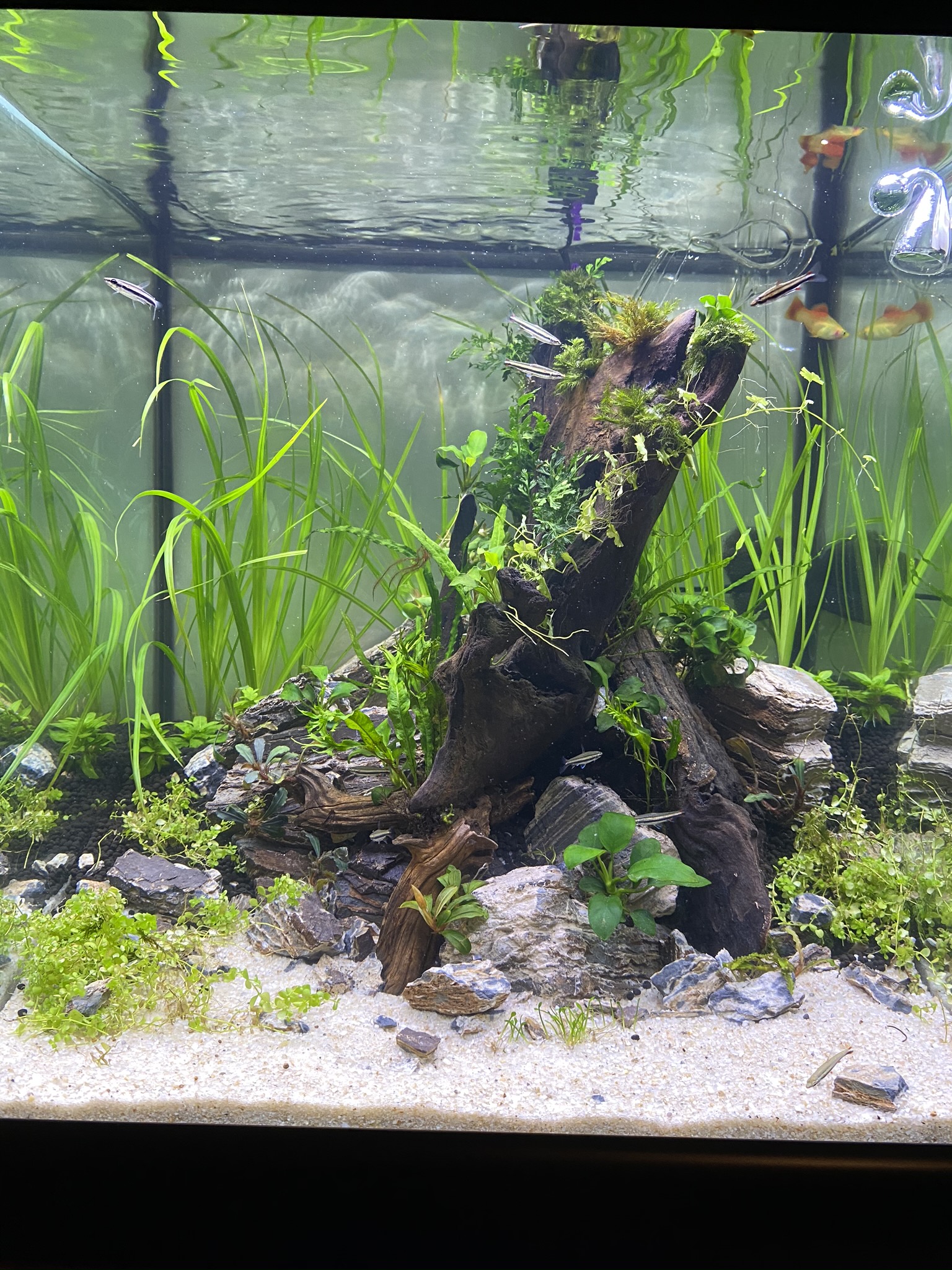 1) Ended up ditching the Cascade canister. For the money, they are okay, but I do not care for the amount of media bypass these filters have. I have since upgraded to a Fluval 407 canister, which has been great for me. Dramatically better filtration and flow. Actually approaching close to 10x actual flow in the system and have noticed a difference in how some of the plants respond. At the very least, there's much less settling on the Anubias leaves and anything else with broader leaves. I rinse the sponges weekly and dispose/replace any polishing pads.

2) Finally finished off my various Seachem Flourish line ferts -- or enough of them, anyway. Once I ran out of Flourish Phosphorus, I broke down and bought some Nilocg Thrive, which I've really liked. It's all I add anymore, except after water changes, where I add about .5 dGH worth of Equilibrium and .25 tsp of Epsom salt. I also like to add the Thrive daily at a half dose to keep things consistent. I usually add a bit more after a water change--say 20-25% more. Even if it costs more than dry ferts, it's extremely convenient and economical for my tank size.

4) Added Ludwigia natans "super red" in place of the Rotala rotundifolia. Should have a lot more color, hopefully.

5) Added various Bucephalandra--some were throwaways from the LFS and others more purposeful.

Other than that, I've just been sitting back and enjoying it immensely. Growth is very manageable, but not stagnant either. I think I've hit the sweet spot with same two light fixtures I have originally listed.

Anyway, on with pics (really need to work on my photography skills. Pictures look flat and terrible compared to in person):

Please ignore the member of the PAW Patrol lol. Had to convince my 4 year old to keep the tank 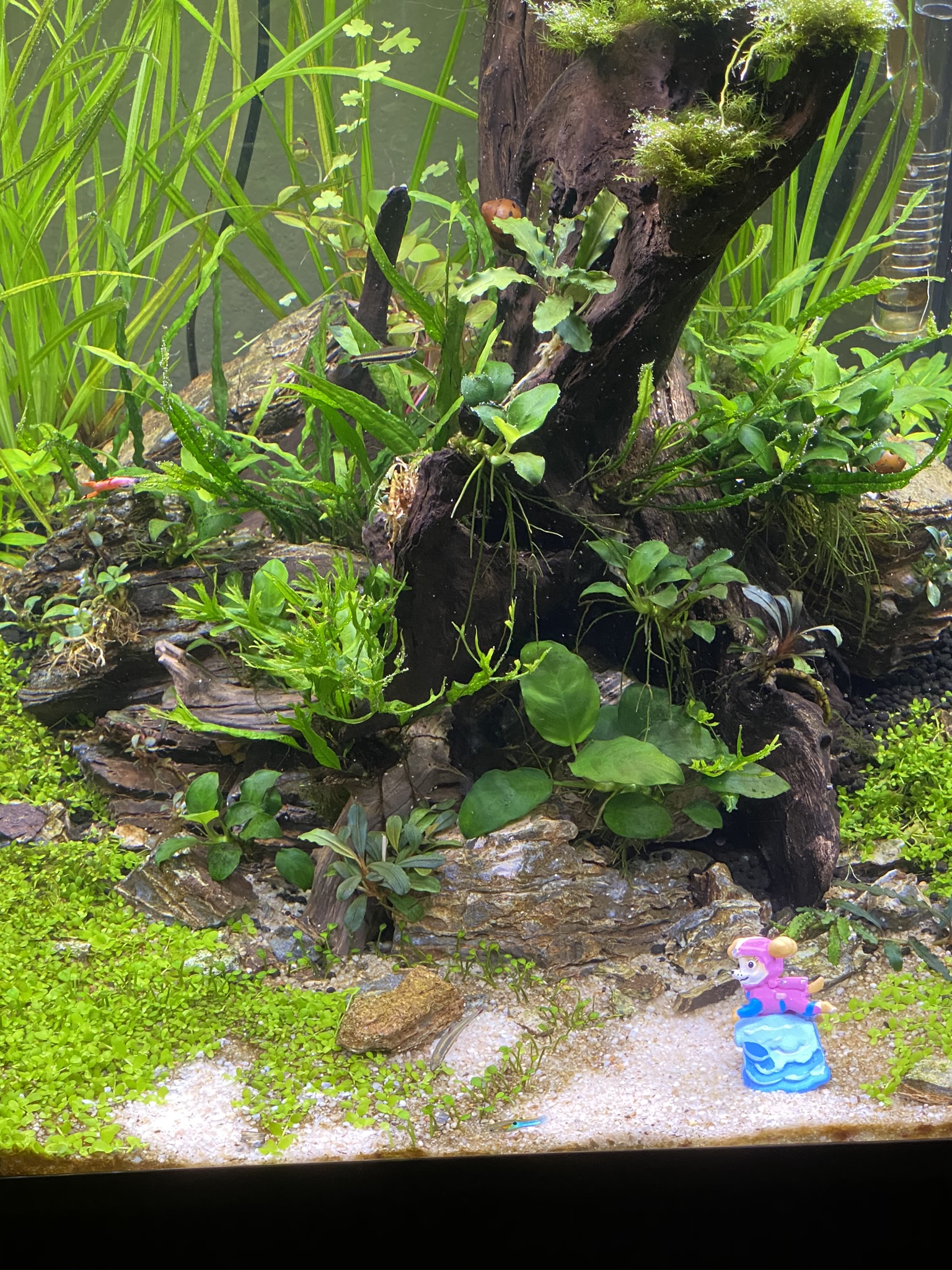 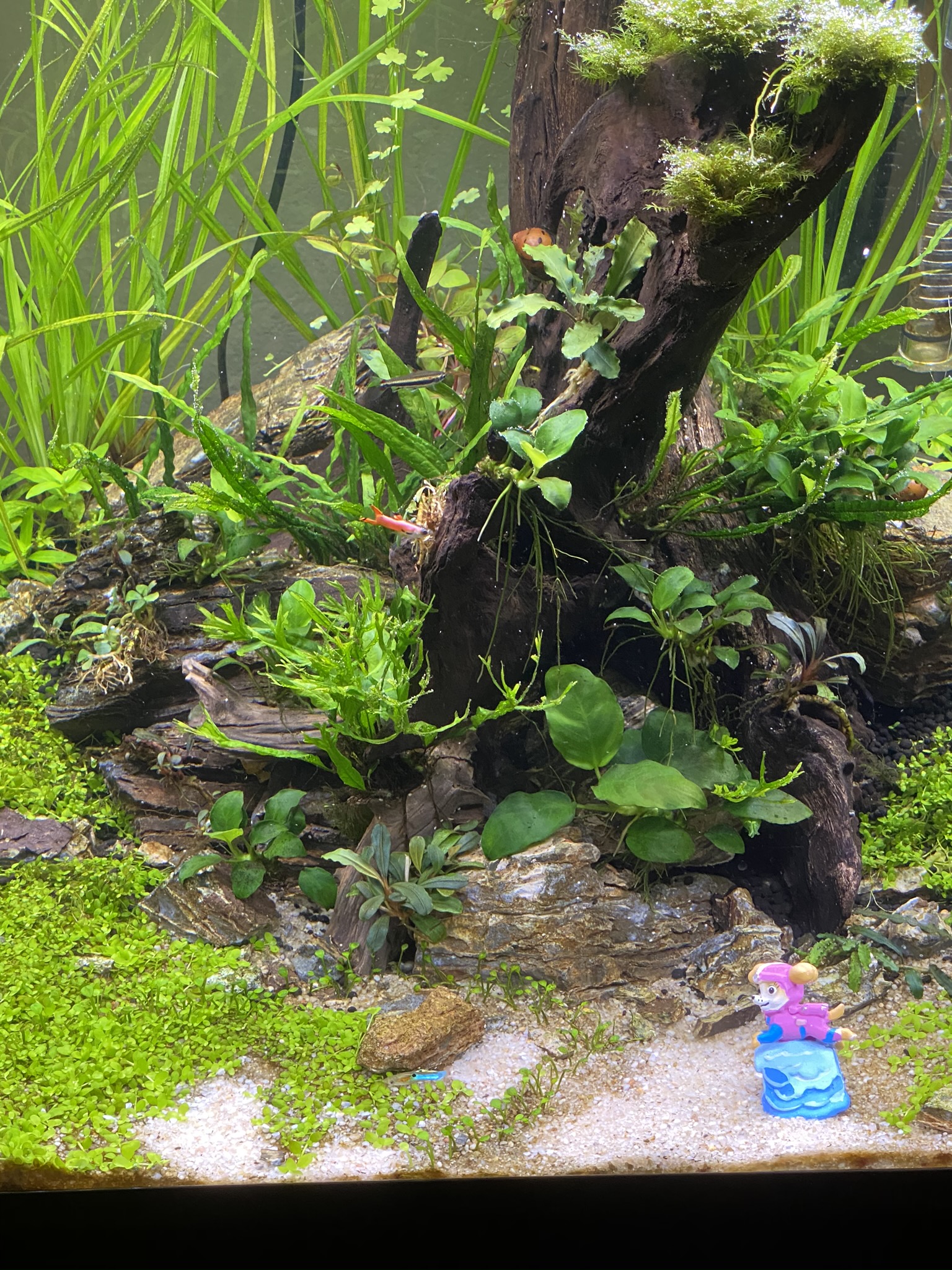 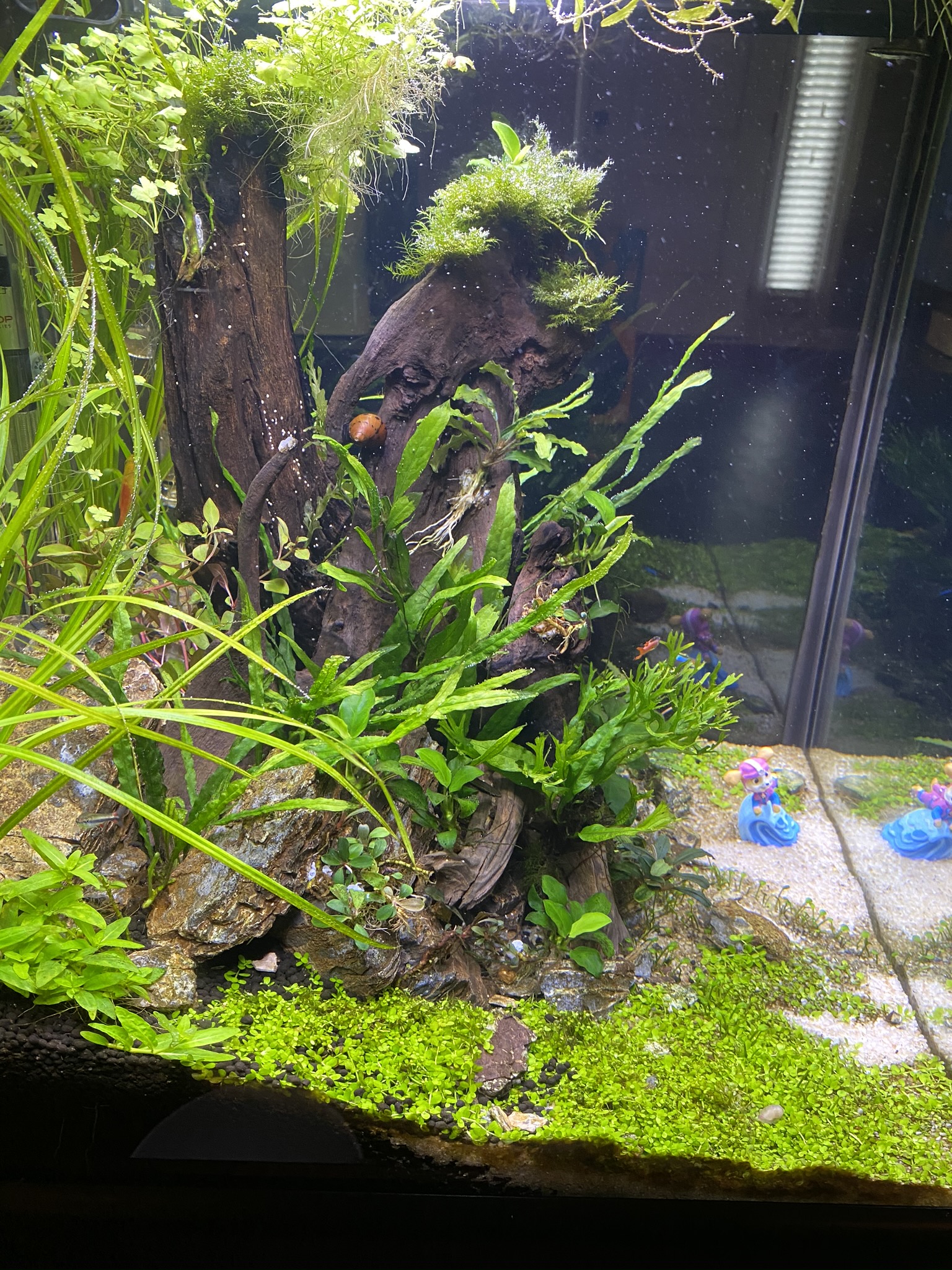 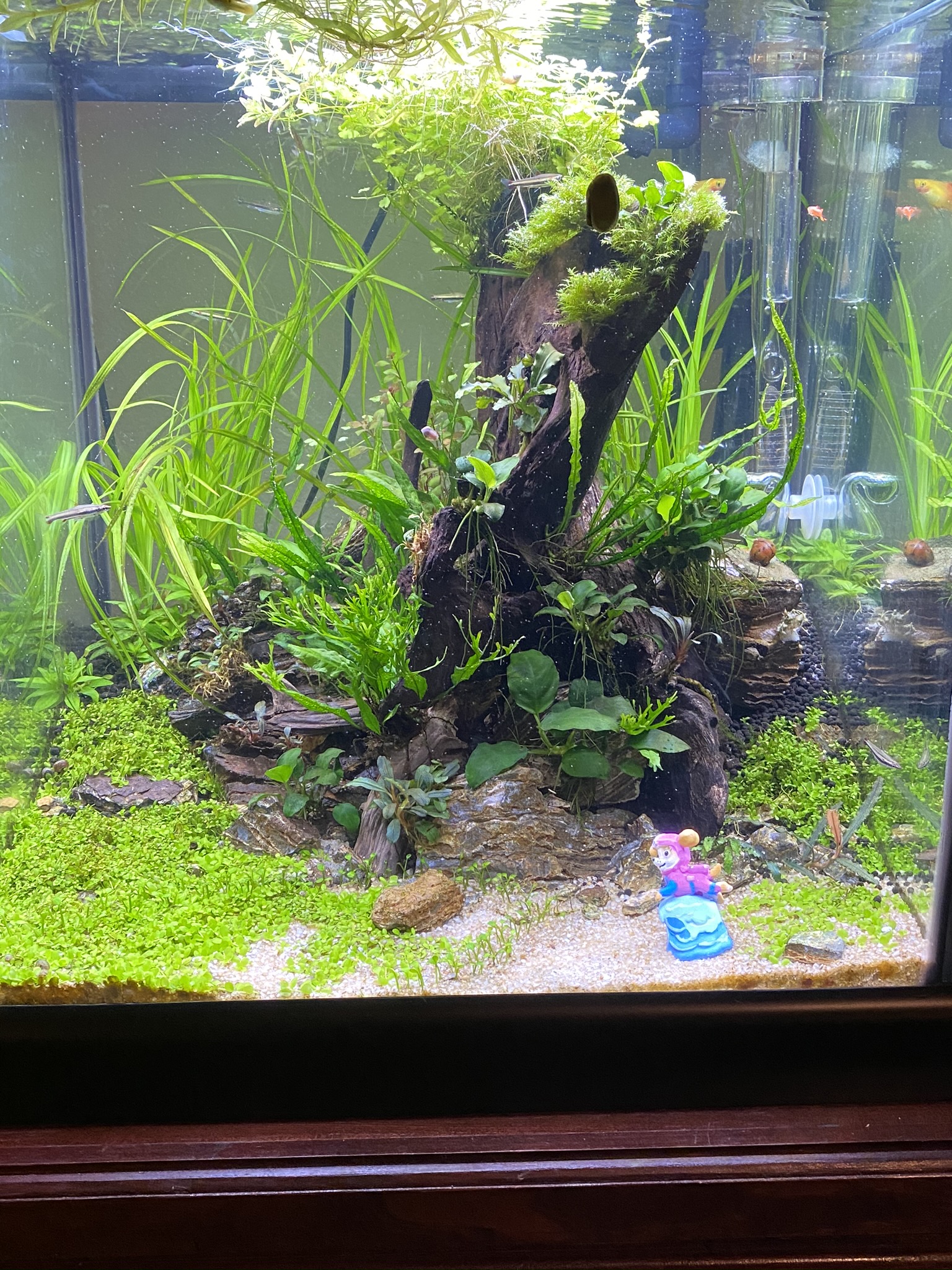 
(View User Tanks)
PTrader: (1/100%)
Join Date: Jan 2016
Posts: 59
Updates: Tank has really started to look even nicer after adding the "oversized" Fluval 407 canister. There is far less detritus overall in the tank; it's dramatically clearer; the leaves have no detritus settling. Overall, much healthier looking and it has had a big impact on how much time I spend on maintenance. I can do minor siphoning/vacuuming in ~10 mins as opposed to 20 or so. I still clean the canister weekly, so that part has not changed. I could possibly get away with slightly less, but I haven't felt the need at the moment.

I also removed almost all of the Hydrocotyle tripartita to give mosses, ferns and Bucephalandra some extra breathing room. In its place, to add a welcome splash of red in a sea of green, I added Ludwigia sp. "super red". The color at the higher points has turned blood red, while the rest is an orange-copper color. Newer growth tends to be reddest. Once it grows out, I'll top it and replant some more to add a bit more volume. Easily one of my favorite plants in the tank.

Still waiting on the new Bolbitis heudelotii to grow some. As of right now, I barely have anything out of it, so hopefully just a matter of time.

Also added some new snowball and orange rili shrimp to the tank to give it a bit more activity.
Amphiprion1 is offline
Quote Quick Reply
post #7 of 9 (permalink) Old 05-14-2020, 10:03 PM
monkeyruler90
Wannabe Guru

do you feel with the new filter you've had to adjust the surface skimmer? when I moved to a larger filter I noticed the top would sometimes bob up and down until I got it fine tuned
--Oscar.
Fluval pimp #4 aka PIMP master!
I SAID ITS GREAT
TO BE
A FLORIDA GATOR!!


To view links or images in signatures your post count must be 10 or greater. You currently have 0 posts.
monkeyruler90 is offline
Quote Quick Reply
post #8 of 9 (permalink) Old 05-15-2020, 02:43 AM Thread Starter
Amphiprion1
Algae Grower


(View User Tanks)
PTrader: (1/100%)
Join Date: Jan 2016
Posts: 59
Quote:
Originally Posted by monkeyruler90 View Post
yeah a 407 on that tank size is definitely going to keep the water clean
it'll be nice that it'll give you more time in between filter changes

do you feel with the new filter you've had to adjust the surface skimmer? when I moved to a larger filter I noticed the top would sometimes bob up and down until I got it fine tuned
Haha, yes -- glad you asked lol.

I fought with the surface skimmer for hours. Finally resorted to having to saw off about 1/3 the length of the plastic pipe that makes up the insert. After doing that, the amount of suction reduced dramatically and makes using the surface skimmer much easier and more manageable. I cut off the tube section by section until I was able to get a stable suction on the surface. Works better now than it ever has and with far less fuss.

In any case, while the 407 seems like overkill, when you stack all the media in, it is closer to 10x turnover anyway, which is what I was shooting for.
Amphiprion1 is offline
Quote Quick Reply
post #9 of 9 (permalink) Old 05-28-2020, 02:16 AM Thread Starter
Amphiprion1
Algae Grower 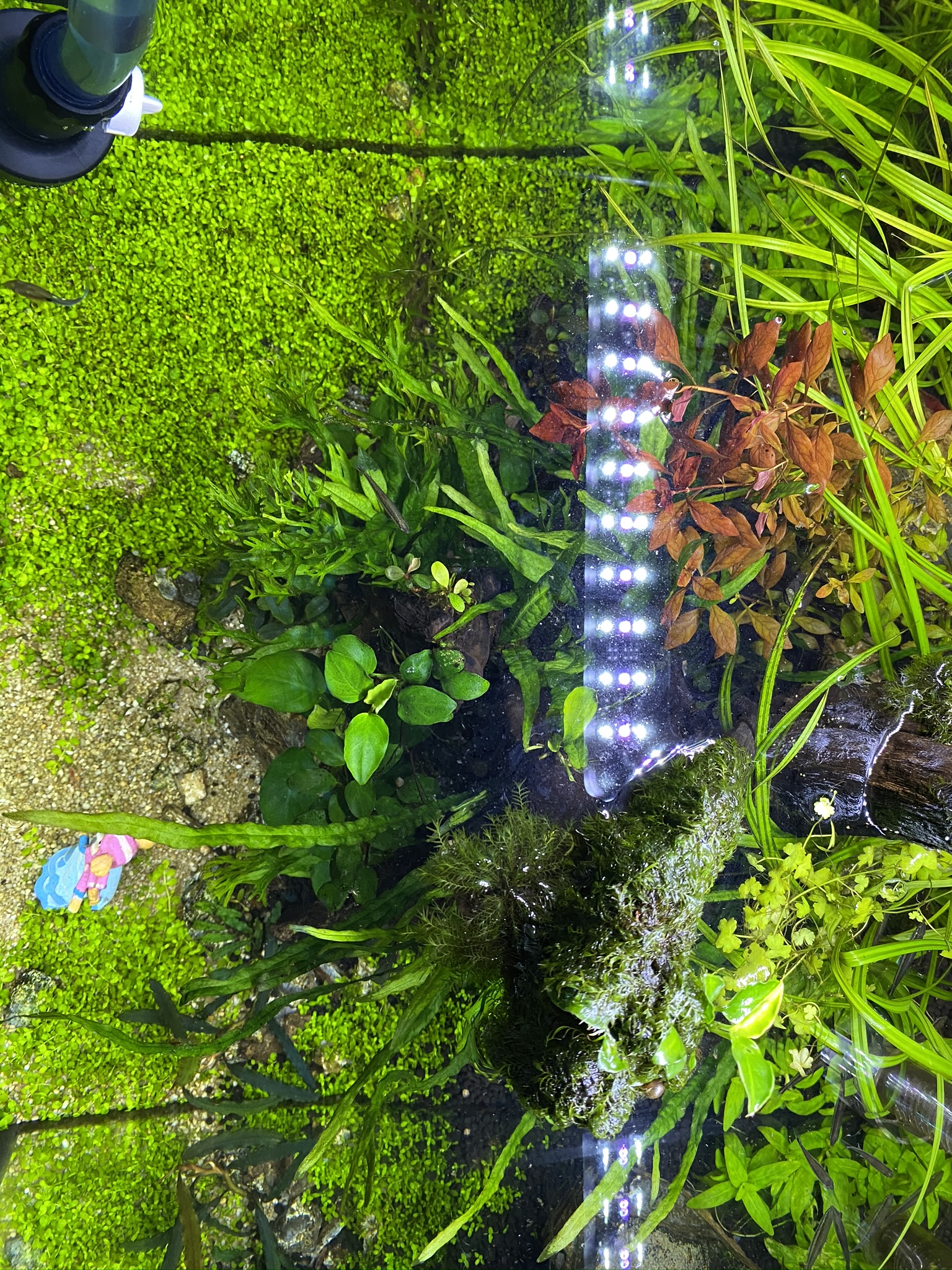 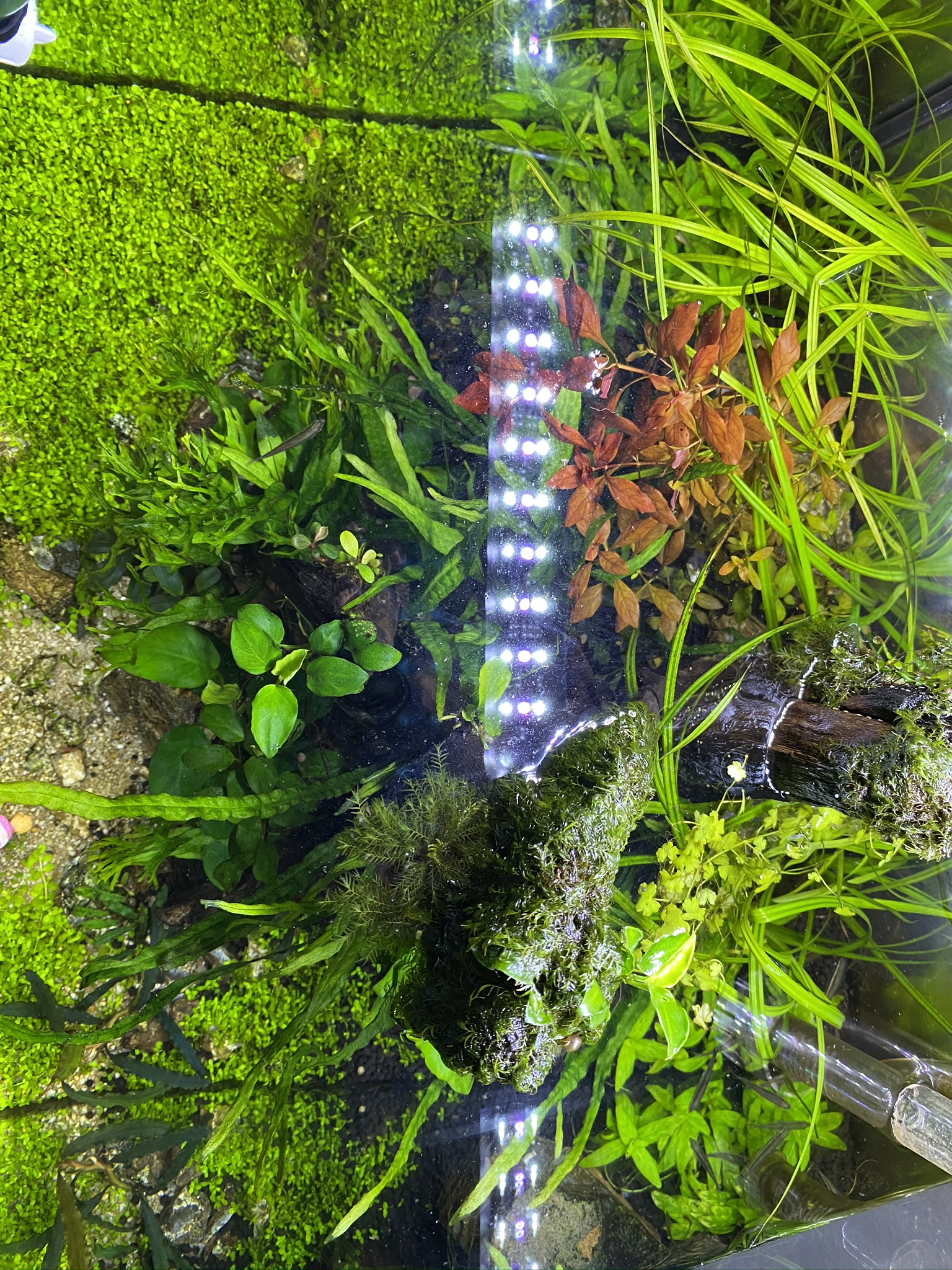 doug105! and Bon MotMot like this.
Amphiprion1 is offline
Quote Quick Reply