(View User Tanks)
PTrader: (0/0%)
Join Date: Nov 2019
Location: Southern Ontario
Posts: 6
Ben's Low-Tech 10 gal Betta tank
Hi all, I just found out about this forum and am excited to join and become a part of this great community.

I've had the tank running since January and wanted to start documenting my journey through this hobby.

I've had the tank planted since it's inception but I have started experimenting more with different plants and making a better ecosystem.

I look forward to some discussions and advice from you guys (with much more experience than I have), thanks in advance for checking out my tank 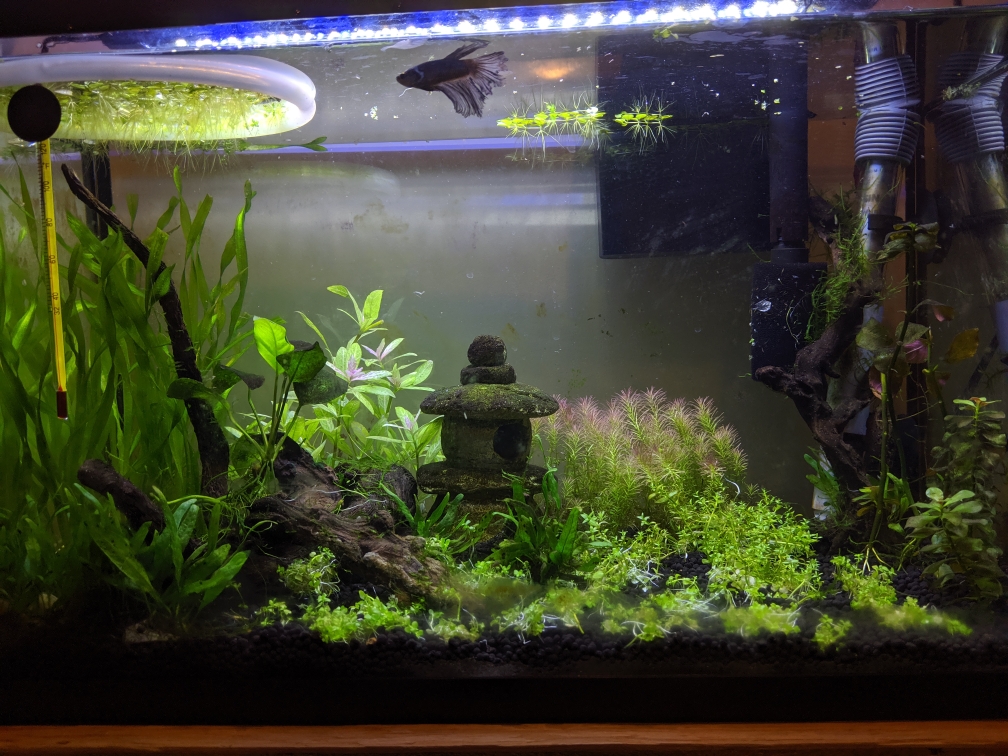 
(View User Tanks)
PTrader: (0/0%)
Join Date: Nov 2019
Location: Southern Ontario
Posts: 6
I'm thinking more and more of changing my substrate to a black sand of some sort after hearing success of others with the ease of planting. I'm having a lot of dissolved organics im the water column because I don't want to disturb the substrate too much as the plants deroot easily. It's a miracle I've actually got the Monte Carlo to stay down (we'll see how long it lasts)

I'm excited the r. Wallichii is growing and colouring up, I've heard of it succeeding in Low-Tech but had my doubts. We'll see In the long run.

Does anyone have experience mixing aqua soil and sand together to get the best of both worlds?

Also I'm starting to see why the hygro polysmera is invasive in the us (I'm in Canada btw), it seems to be branching off at every node into one or two more stems without my cutting it.

Other than some small battles with string algae, diatom algae/spot algae and spots of blue green algae, things are going well.

Quote:
Originally Posted by Discusluv View Post
Welcome to TPT!
Thanks for the warm welcome!

Water change day today. The gratiola is rooting and taking nicely to the tank. The monte carlo is still having a hard time rooting, so we will see if that takes off. I was hopeful on the MC but half expected it not to take.

I'm questioning the super leggy rotala on the right, but the roots are pretty strong so we will see. I trimmed off one of the stems with a side shoot so maybe it will continue to throw out side shoots and keep going. Might have to remove it along with the other leggy stems. 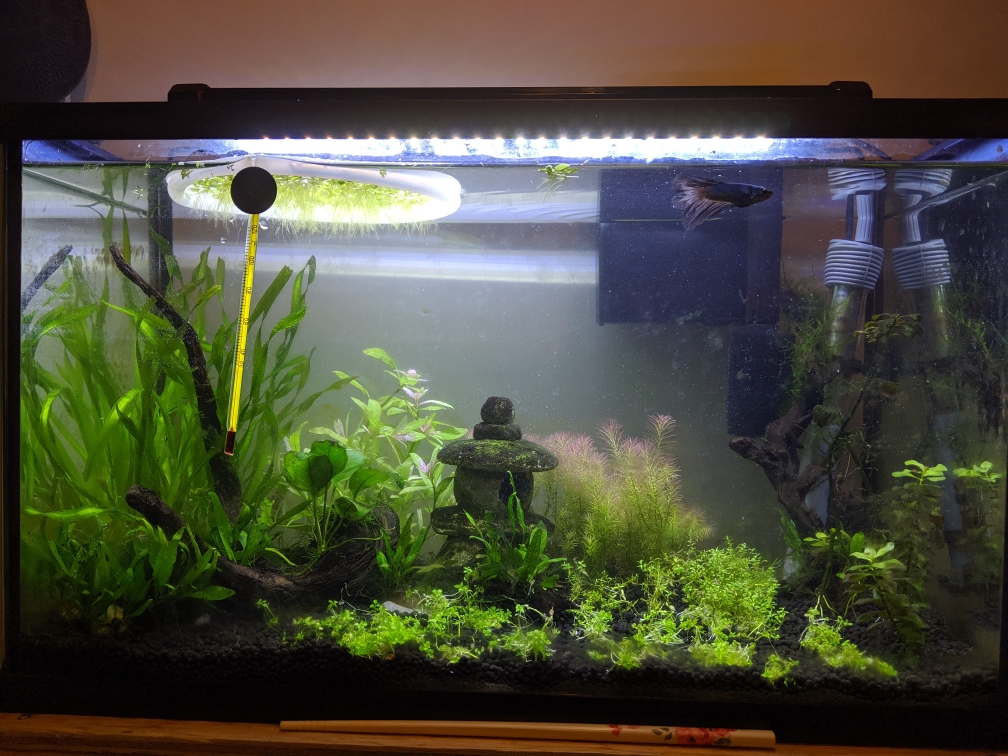 
(View User Tanks)
PTrader: (0/0%)
Join Date: Nov 2019
Location: Southern Ontario
Posts: 6
The day finally came, hollywood finally decided my shrimp would be a snack. I was excited too because I came home to a bubble nest. Swim in peace little shrimp.


(View User Tanks)
PTrader: (0/0%)
Join Date: Nov 2019
Location: Southern Ontario
Posts: 6
So it's been a little while since I last updated this thread. Since I've had a green string algae infestation, I'm doing regular waterchanges and split my dosing from two pumps of tropica specialized to one pump twice a week.

I've removed most of the gratiola, it never really rooted and most of it melted away, there is some new growth that I kept to see how it does long term.

I let my floaters loose as an attempt to reduce some light and soak up some nutrients. They are also a home to string algae which I thought was weird, but we will see long term how this works. I'm trying to keep the water level above the HOB outlet so I get some surface movement while having low flow for the Betta.

The Monte Carlo seems to be rooting good now, hopefully it will slowly spread out and give me a nice carpet.

My ludwigia seems to be making a comeback, multiple side shoots coming from most of my stems, and new growth from where I chopped the stem previously. I tried removing one of the stems with no healthy leaves and uncovered some crazy roots. I chopped and replanted with no remaining leaves and it has a side shoot, still waiting on the main stem to give new leaves though.

My now sole inhabitant seems happy still, though I'm thinking of getting a snail or two, maybe ramshorns, though I want to get a hardness test kit because I think my water is relatively soft. I previously had some pest snails and they've all disappeared, so I'm holding off till I'm sure they won't perish.

Here's some photos of my tank right after my water change. 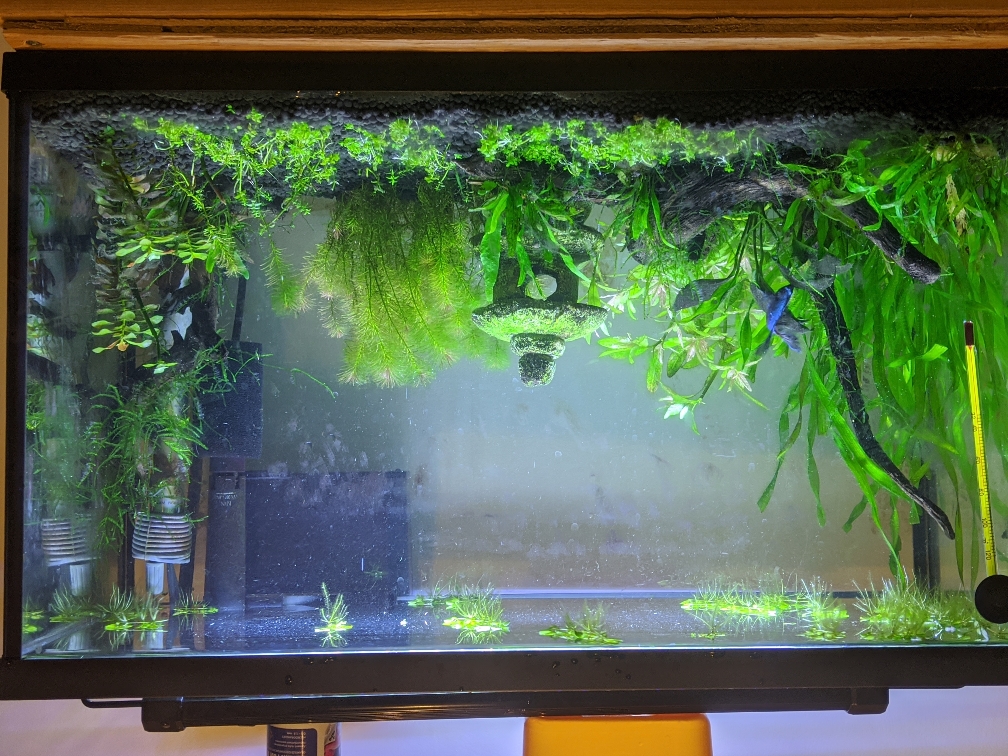 The carpet after removing most of the gratiola 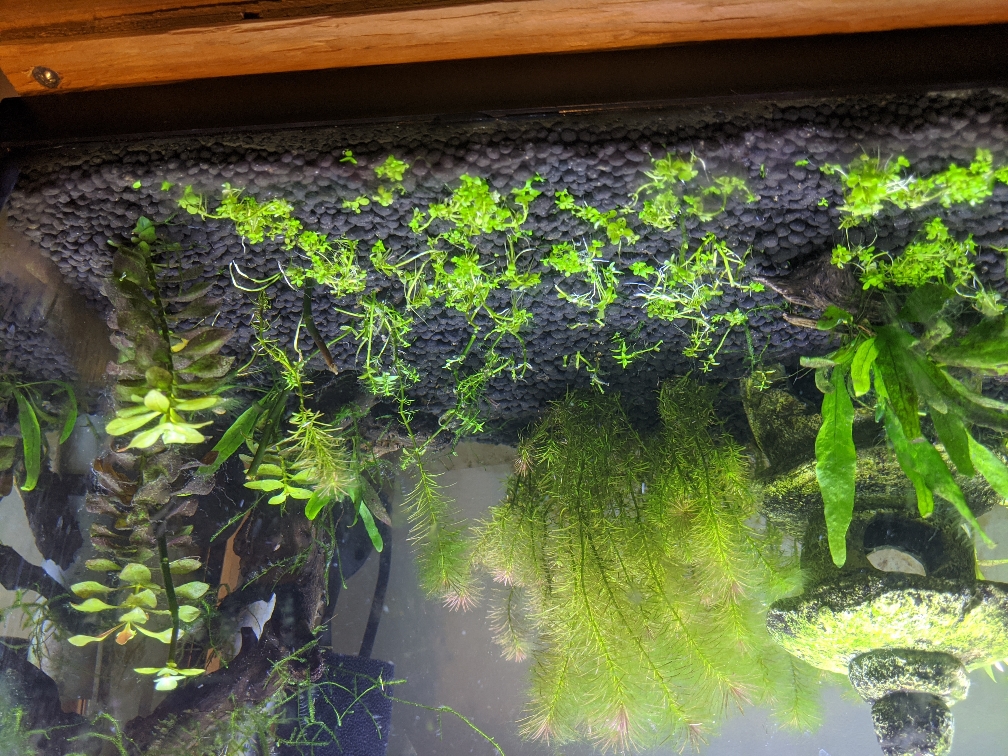 The gsa infestation my my rotala. I'm sad about this but I hope these stems will make a comeback, if not I think I'll move the hygro In it's place 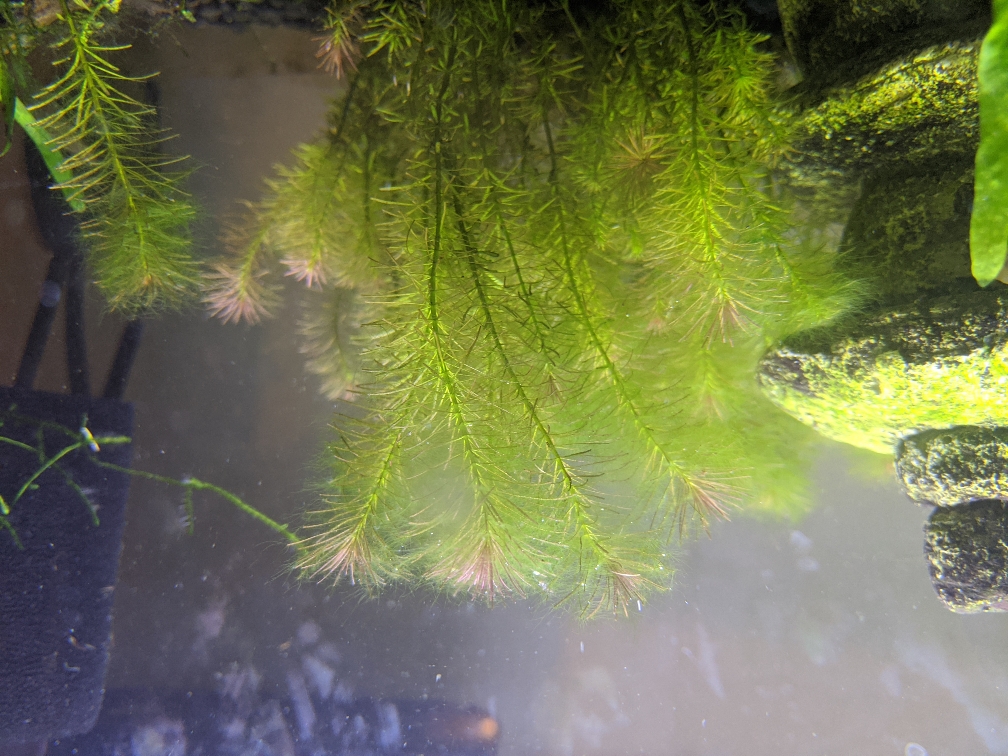 
(View User Tanks)
PTrader: (0/0%)
Join Date: Nov 2019
Location: Southern Ontario
Posts: 6
Time for a new update. Tested gh and kh, gh was 1 and kh was 2. Using 17g of equilibrium we are raising the gh with each water change. It makes my tank super cloudy for an hour or two but it should help all my stunted plants.

New plant! My first crypt, beckettii petchii. Lost a few leaves to melting but otherwise there is new growth and it seems alright for now.

Most of my plants are covered in green string algae. I think it's mostly due to not having any hardness in my water. Will continue to monitor now that I have a more regular schedule. The biggest factor contributing to my algae thought was forgetting to turn the timer on, and leaving the lights on for nearly a day. Makes a huge difference when my photo period is only 4 hours.

Anyways, I feel back on top of things constant regular waterchange mondays. Including remineralizing and fertilizing. With a second fertilizing dose on Thursday or Friday.

BGA is still growing slowly but my manual removal is actually keeping it mostly at Bay, so aside from some spots here and there it isn't overbearing.

The crypt was the biggest factor in me going for a remineralizer. The store had it in it's submerged form so I didn't expect too much melt, but the leaves developed pin holes (as well as some of my other plants that I wrote off) so we will see if it makes the difference.

Still waiting on the carpet to grow in lol. Life of the low tech.