(View User Tanks)
PTrader: (0/0%)
Join Date: Jun 2019
Posts: 5
My Extremely Low Tech Goldfish Aquarium.
I've kept goldfish off and on since childhood. My last tank was set up for three years but introducing a new fish to the aquarium brought a parasite infestation that killed my fish. My fault for not quarantining the new fish for more than a couple days (they looked healthy!). That was a few years ago.

I got it in my mind that I wanted to set up a new aquarium, and this time I would try growing live plants. I have never kept live plants in a tank before and was ignorant on every possible level. I wanted a very simple tank, as well, was very cautious, and consequently my approach was wrong. 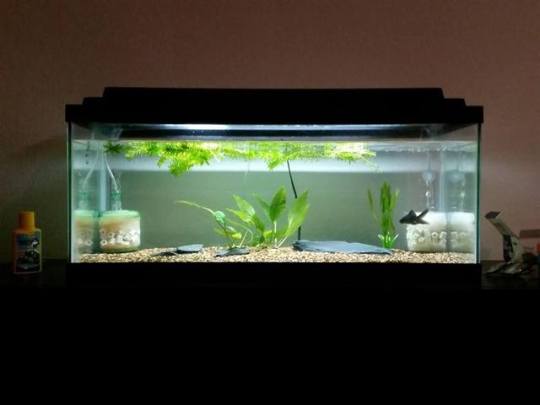 I went with anubias because that's what everybody online recommended for keeping in a goldfish aquarium. Only a week or so after buying the first plants, the local Petco had a store closing sale, and I picked up some more plants. Just whatever they had left that didn't look dead. 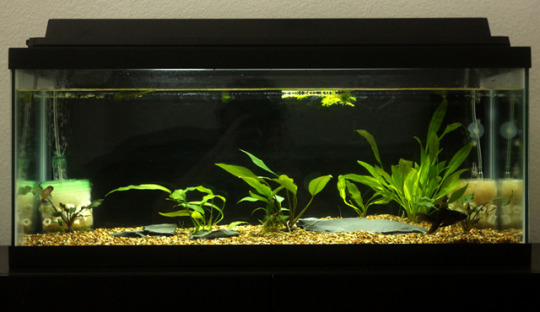 So, two Cryptocoryne plants, a Melon sword, and an Amazon sword joined the tank. The swords both deteriorated rapidly and I bought root tabs to try and remedy this. The melon responded well, growing new leaves rapidly, but the Amazon has continued to decline, albeit at a much slower pace than before. The crypts grew so well I split them apart into multiple smaller plants.

This was essentially how the tank remained until two months ago. I began reading two old books on goldfish, both from an era when it was believed plants were essential to keeping fish alive in an aquarium, and realized I had under planted the tank, and had the wrong sorts of plants for the simple setup I want to run. At this point I got the Sagittaria and Vallisneria, as both were recommended in these books (the older book claiming these plants are without doubt the two most important to aquarists! obviously I had blundered in omitting them from my tank!). Shortly after I added the Crypt. Balansae as well. I plan to remove the swords and replace them with Crypt. Spiralis. 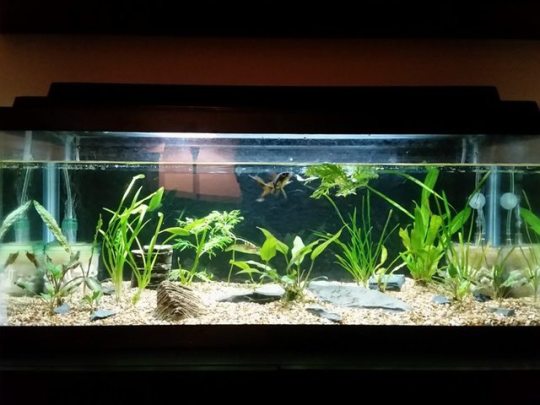 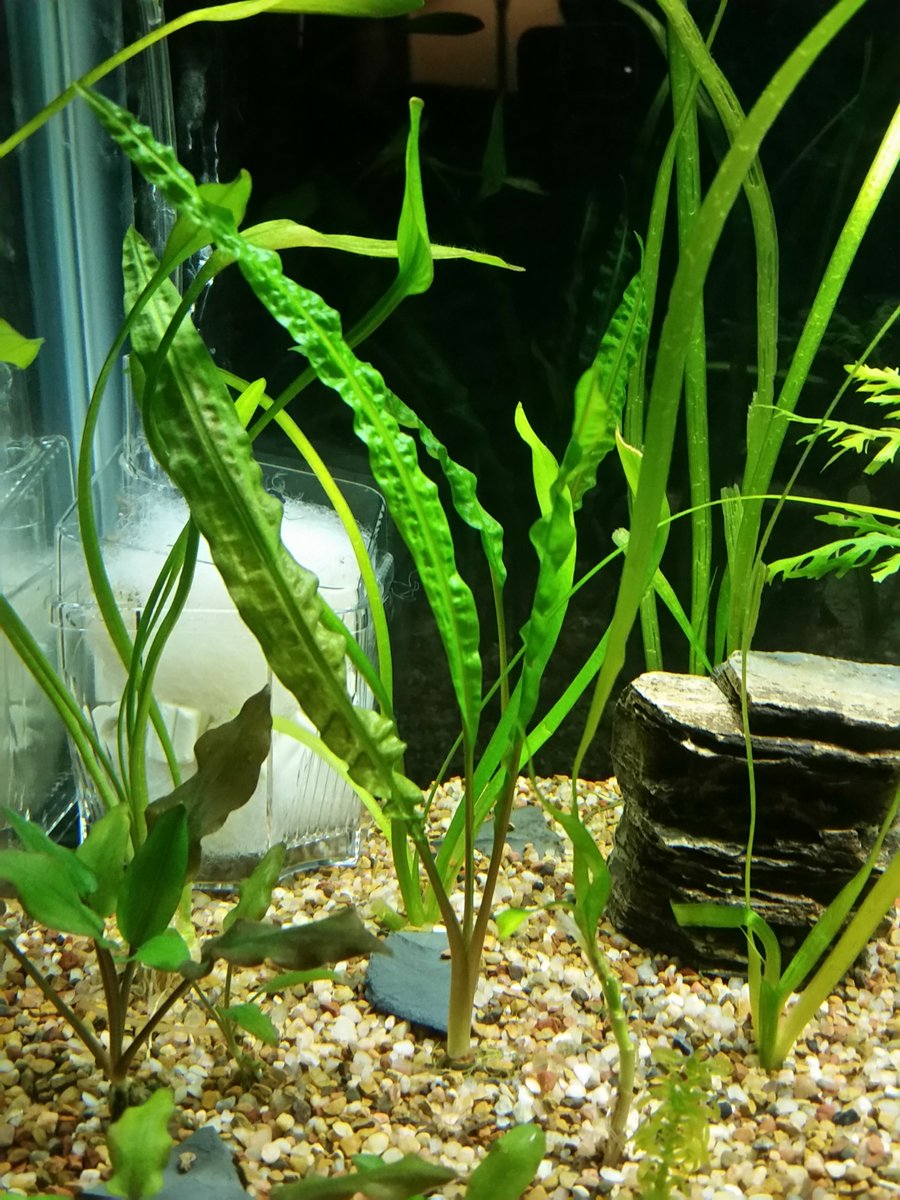 I got the Val. from two different sources and the results have been variable, with one bunch melting back severely and the other taking root and shooting runners almost immediately upon being planted. Now both bunches are growing new leaves and roots. The Crypt. Balansae is doing great, just like the other Crypts in the tank. The Sag. had a couple leaves melt, but new leaves have grown in.

Most recently I replaced the bulb with a new one (bought months ago at the petco sale) because I noticed the light was getting yellower and algae was starting to grow in the tank again.

The substrate is a mixture of two different sizes of gravel (a fine gravel and a medium coarse gravel) and there is no dirt. I should have gone with coarse sand, and perhaps that will find its way into the mix in the future as well. Filtration is minimal, with two corner filters to catch particulates and house ceramic bio media. They are cleaned alternately to avoid crashing the cycle. I change about three to four gallons of water each weekend when vacuuming the gravel. The plan is to run a tank essentially as it would have been in the 1950s. I had gotten a little tired of all these new internet myths about keeping goldfish: not to put gravel in the tank, not to put live plants in the tank, needing a mega huge filter, etc. and just want to run a simple low tech aquarium.

The next step is to remove the swords, and replace them with Crypt. Spiralis and Heteranthera, and perhaps to add a floating plant, possibly Riccia Fluitans or Frogbit.


I'll be documenting the progress here, and perhaps my failures or successes will be educational for others looking to run a low tech planted goldfish aquarium.
Demekin is offline
Quote Quick Reply
post #2 of 3 (permalink) Old 06-30-2019, 06:08 AM Thread Starter
Demekin
Algae Grower

And vlogging my experience:

(View User Tanks)
PTrader: (0/0%)
Join Date: Jun 2019
Posts: 5
Will be taking new photos soon. Removed the sword plants. Removed a couple of the val plants (two of them never grew much, and showed almost no new roots when removed). All crypts are still doing well. Anubias sprouted a new leaf. Sagittaria has sprouted lots of new leaves and lost some. Attempting to introduce Heteranthera Zosterifolia into the tank... it was growing very well in my 5.5 gallon (with no fish, just snails) but seems to just stop growing when put in the goldfish tank. The fish nibble on it somewhat, but even so that doesn't account for its lack of growth, rather puzzling to me honestly.
Demekin is offline
Quote Quick Reply