After taking down my 80g shallow nature aquarium, I took a bit of a break and played around with some smaller tanks... scapes not lasting for more than a couple of months, then redoing and playing again.

The itch came back to set up something bigger...but something different than a traditional nature aquarium or dutch effort. I had seen the aquaterrarium style gaining popularity for a while, loved what I saw, and decided I wanted to give this a quality go.

This journal won't be quite as indepth as my "Green Shallows" journal was, as I'm not building the stand and canopy - and I'm not really documenting it from the beginning as I selected equipment and troubleshooted along the way.

I haven't taken any great pictures at this time, as setting this up has been quite a doozie. Much more contemplation.. sitting and staring..alot of pondering, than I had ever imagined. However I did take a few along the way to document my efforts. I will be planting the "terrarium" dry land section tonight and will follow up with some pictures once those are added.


Lets get to it 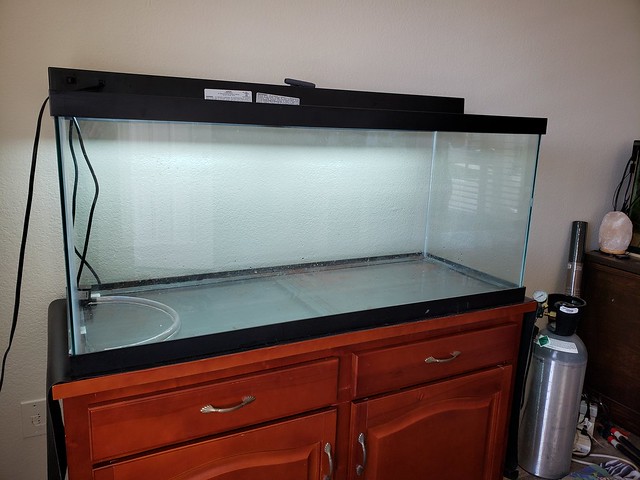 I wanted some larger boulders. Didn't want to spend thousands for this much seiryu ohko etc. Never used Lava Rock so... Went and purchased a few rocks... just over 200 lbs worth 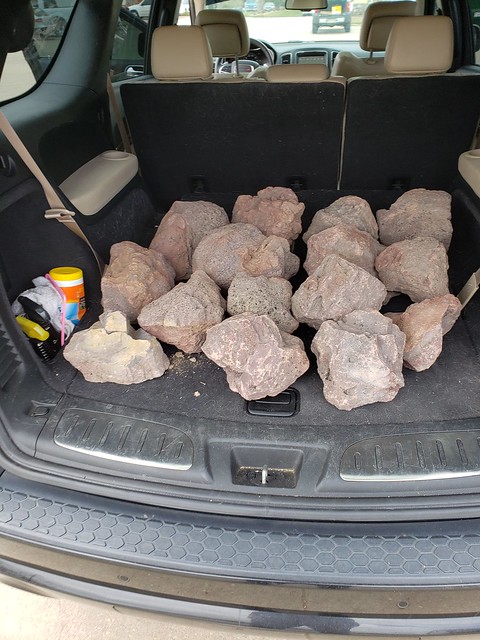 Started doing some mock ups on the coffee table. Love my fiance for dealing with me 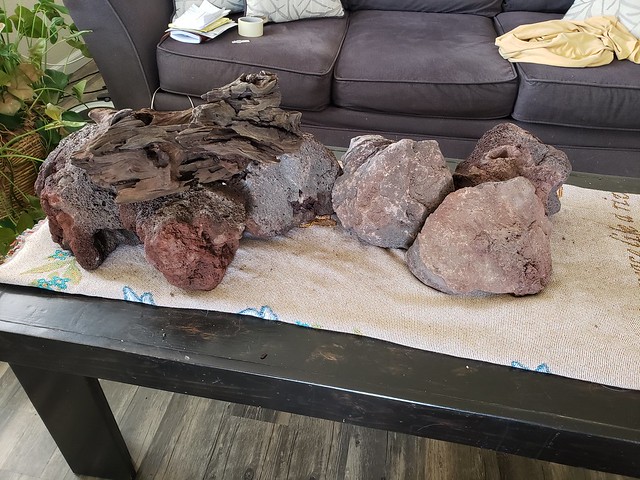 Even after weeks of reading and thinking, still didn't come up with the best method at first for elevating rocks. I would have needed layer upon layer of light diffuser/egg crate panel. Tried rough lava rock but it was just too jagged and unsettled to properly mount bigger 40lb stones on. So I ended up making these "pillows" to place the large boulders on. I also made long "pillows" of these to place behind the rocks to help elevate the planting grounds.

These "pillows" are fine garden pebble inside of mesh bags. The mesh bags are made from drainage pipe "sleeves" that prevent sediment from getting into drainage pipes. Find them at lowes or HD in the garden section. Great find from a youtuber recommendation! 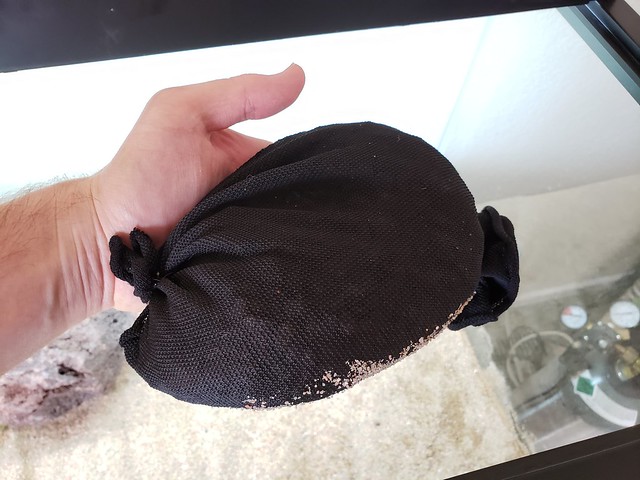 I moved my layout over into the aquarium... but felt it wasn't quite balanced. I ended up removing the driftwood and adding in more rock. By this time, my hands were seriously irritated from loading these heavy rocks in and out during layout, and I couldn't be bothered to close the windows or clean the glass prior to taking pics lol 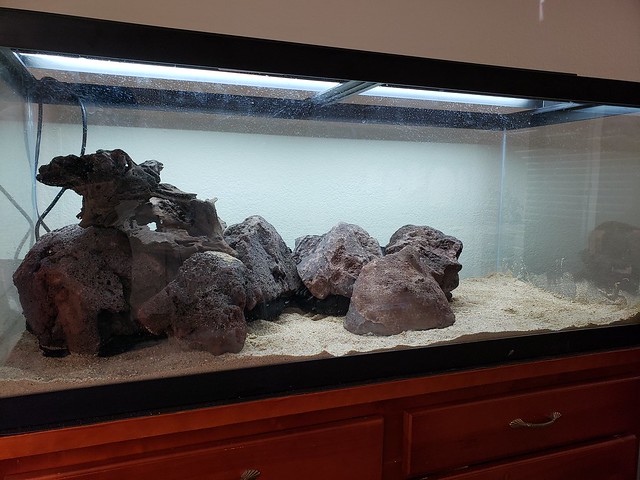 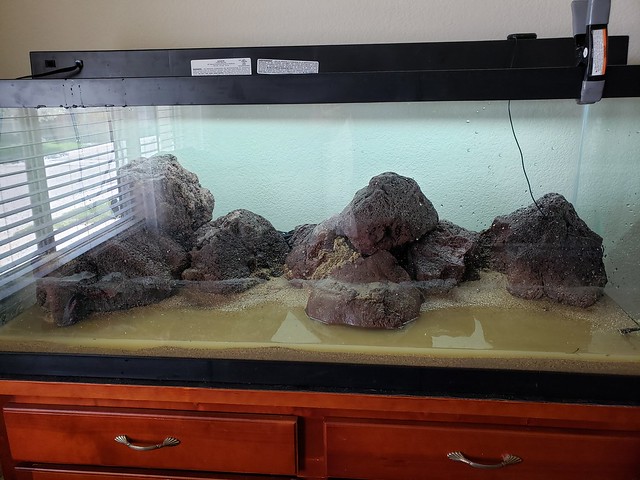 I added about 120 lbs of rough grade pool filter sand to the front. Then a thin layer of small-size lava rock on top of the pillows behind the larger rocks (where I would be adding soil for terrarium planting).

I placed down "weed liner" fabric on top of the pillows/lava rock layer to prevent the dry substrate from mixing down into the rocks and water. I attached some points of the fabric liner with super glue to the rocks, to make sure it stayed put. Then added in a terrarium style substrate mix.

Credit to SerpaDesign as I am trying his "ABG mix".. 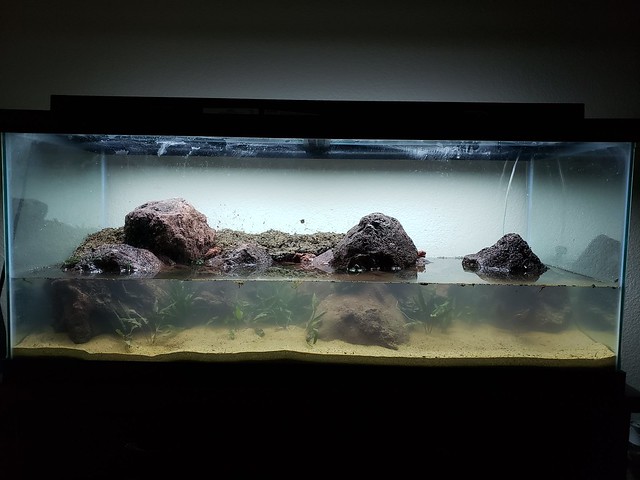 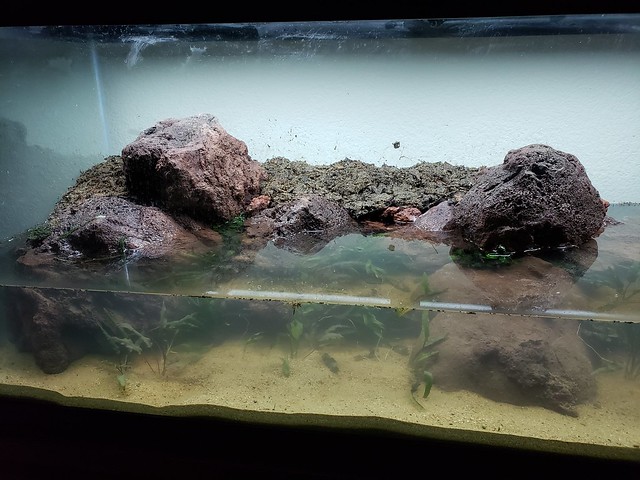 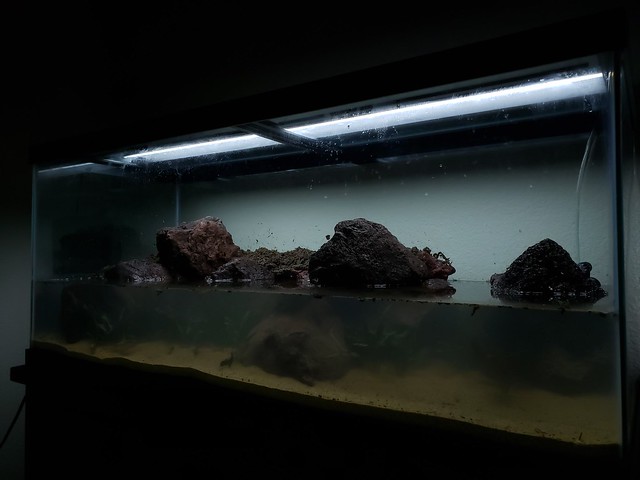 More pictures to come as I plant the terrarium section, and I'll discuss plans for filter and lighting!

Thanks for checking it out

Quagulator, Grobbins48, tredford and 1 others like this.
To view links or images in signatures your post count must be 10 or greater. You currently have 0 posts.
Williak is offline
Quote Quick Reply
post #2 of 5 (permalink) Old 05-07-2019, 02:07 AM
Yaboihunt
Algae Grower


My 30g (25g after learning how a tape measure works) Journal:
To view links or images in signatures your post count must be 10 or greater. You currently have 0 posts.


To view links or images in signatures your post count must be 10 or greater. You currently have 0 posts.
Quagulator is offline
Quote Quick Reply
post #4 of 5 (permalink) Old 05-07-2019, 02:14 PM
Grobbins48
Planted Tank Guru

(View User Tanks)
PTrader: (0/0%)
Join Date: Oct 2017
Location: Upstate New York
Posts: 2,013
Seems like this will be a fun one to follow! Nice start, looking forward to seeing where this goes!
Williak likes this.

(View User Tanks)
PTrader: (1/100%)
Join Date: Jul 2003
Location: Rock Hill, SC
Posts: 1,658
This is pretty exciting Will! I'm sad to hear about the 80 gallon, but I get ya. I'm actually just restarting mine after about six months of doing nothing with it. Can you get a closer picture of the sand? I've been trying to find 2-3mm silica sand where I am an have been having a horrible time with it.
Williak likes this.
Phil Edwards is offline
Quote Quick Reply